Dominic Raab today hinted the Government could introduce a new Tier Four set of even stricter coronavirus restrictions as he refused to rule out a national lockdown.

The Government's current local lockdown system is based on three tiers but there are fears that even the most draconian rules in Tier Three are not enough to stop the spread of the disease.

A new Tier Four could see non-essential shops told to close and travel limited to getting to work and school.

Mr Raab said the Government is 'always ready for further measures' as he insisted ministers intend to stick to their localised approach of cracking down on infections.

But the Foreign Secretary admitted that both Germany and France had also used a strategy of local crackdowns before ultimately being forced into new nation shutdowns.

He would only go so far as saying the Government is 'striving to avoid' following the UK's European neighbours as he resisted imposing a 'blanket approach or a blunt approach'.

His comments came as local leaders warned it is 'inevitable' that Birmingham will soon be moved into Tier Three as ministers warned the nation is heading for a national lockdown 'by proxy'.

Some 21 million people across England will soon be living in areas subject to Tier Two restrictions while 11 million will be in Tier Three, which means some 32 million - almost 60 per cent of the population - will be in the higher tiers.

As well as Birmingham there are growing fears that London could also be plunged into Tier Three within two weeks as infections in the capital continue to rise.

West Yorkshire will be placed into Tier Three from midnight on Sunday, as 2.3 million people across Leeds, Bradford and Wakefield will join the eight million in Liverpool, Greater Manchester and Nottibghamshire already under the strictest curbs.

Ministers were said to have been shown 'very, very bleak' data this week which experts believe could result in the whole country being in Tier Three by Christmas. 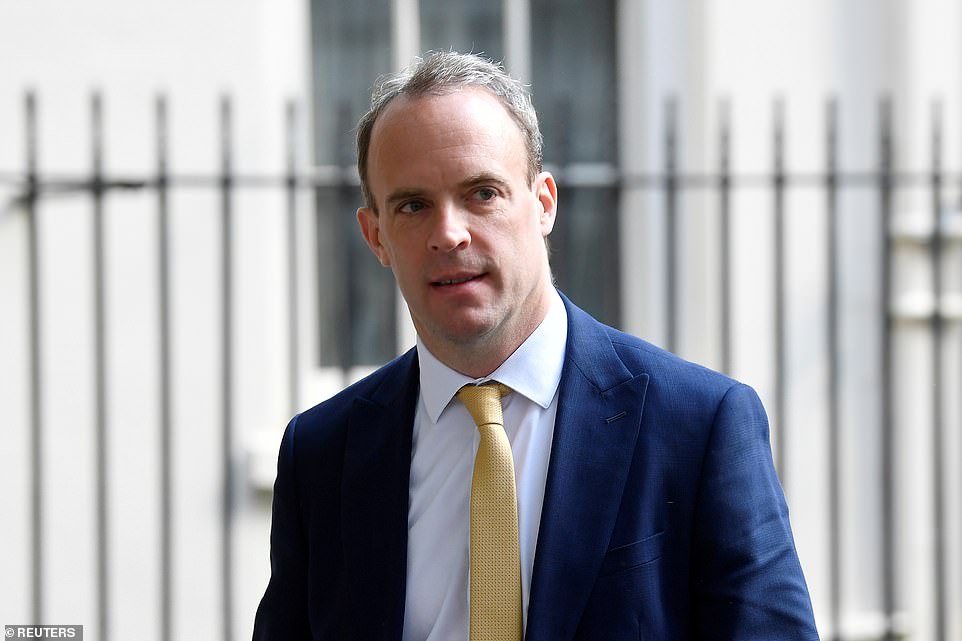 Dominic Raab, the Foreign Secretary, today did not deny that ministers are considering introducing a new Tier Four of coronavirus restrictions 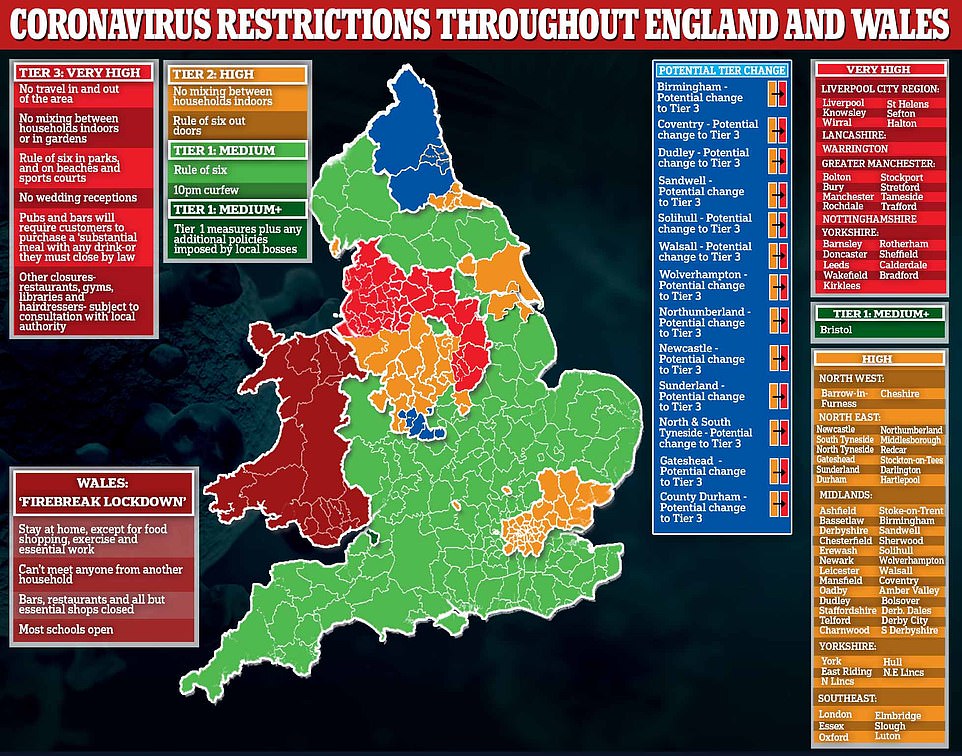 The latest coronavirus developments came as:

Mr Raab said the public would find it 'desperately unfair' to impose a national lockdown while rates of infection vary across the country.  Nottinghamshire Police said 40 young people are facing fines after a party was broken up at a student hall of residence.  It emerged that Britain’s biggest lenders charged the Government more than £65 million in interest in just three months to provide loans to British businesses during the pandemic.  British Airways’ parent company IAG swung to a pre-tax loss of 6.2 billion euros (£5.6 billion) for the nine months to the end of September, compared with a 2.3 billion euros (£2.1 billion) pre-tax profit during the same period a year ago.

Tier Three restrictions mean pubs and bars have to close unless they are serving substantial meals while the mixing of households indoors or outdoors, including in gardens, is also banned.

But some experts are sceptical that the top tier is enough to get the spread of coronavirus back under control amid growing calls for tougher action.

The Government is reportedly considering introducing a new Tier Four of restrictions.

Mr Raab this morning did not deny that is the case as he told the BBC's Radio 4 Today programme: 'We are always ready for further measures that we can take but I think the most important thing about further measures is we continue on the track that we are on of targeting the virus.

'The difference between now and the first lockdown is we are in a much better place to really focus on where the virus is the greatest and I think that is right, not only in scientific and virus management terms, I think in terms of the way people feel about tackling the virus it is fair, it fits the natural justice that we are focusing on the areas where the uptick is the greatest and we are not taking a one-size-fits-all approach or a blanket approach or a blunt approach.'

Mr Raab said the Government wanted to avoid the 'arbitrariness of a blanket approach' as he claimed the public favour targeted restrictions.

However, he did not rule out eventually having to roll out a national lockdown after France and Germany made the move earlier this week.