Gutless thug who killed his mate with one punch to the head gets his sentence slashed for pleading guilty despite lying about the attack for two years Glen Kerry Patterson, 51, sentenced to five years, six months jail on Thursday  The family of one-punch attack victim Adrian Trett, 45, 'devastated' by sentence  The victim was left unconscious on the side of the road 50m from a hospital 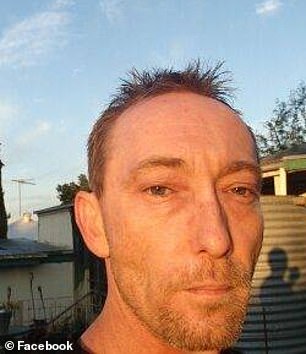 A family say they are furious after a man who killed their father in a one-punch attack has received a huge discount on his sentence despite lying about it for years.

Adrian Trett, 45, was dumped unconscious and wrapped in blankets about 50m from a hospital in Mannum, South Australia in 2018.

His attacker, Glen Kerry Patterson, 51, had misheard something Mr Trett had said and ordered him to leave his house.

Patterson, who was drunk and on drugs, then punched the victim - sending him down a flight of stairs, and pretended he had nothing to do with the crime for two years, South Australia District Court heard.

Mr Trett did not regain consciousness at the hospital and passed away 12 days later.

Despite lying about the attack for years, Patterson eventually pleaded