When the dogs were deployed at Helsinki airport in Finland, scientists were left scratching their heads when the animals stopped people who seemed well.

Travellers stopped by the sniffer dogs were given swab tests to see if they were carrying the virus but they all came back negative.

A few days later, however, the same supposedly-negative people told researchers they had come down with symptoms of Covid-19.

Dogs have been used in experiments for years because they are able to pick up on changes in the way people smell that can indicate illness, for example changes in their metabolism that can be caused by cancer.

Although they could not be used as a standalone way of screening people for coronavirus - but could be useful for picking out who should get tested - they can provide scientists with unique insights on how to spot early signs of the disease.

Six sniffer dogs were trialled by the London School of Hygiene and Tropical Medicine earlier this year to see whether they could be used to detect the virus.

The results of the £500,000-study were reported to Health Secretary Matt Hancock in October, but it is unknown whether they will lead to dogs being used officially. 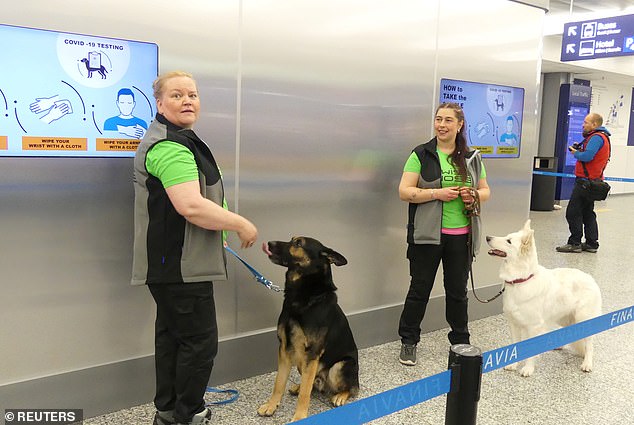 Finnish researchers say dogs are better at detecting Covid-19 infections than PCR tests. Pictured are sniffer dogs Valo (left) and E.T. at Helsinki airport, Finland, where they were being used to sniff out people infected with the virus 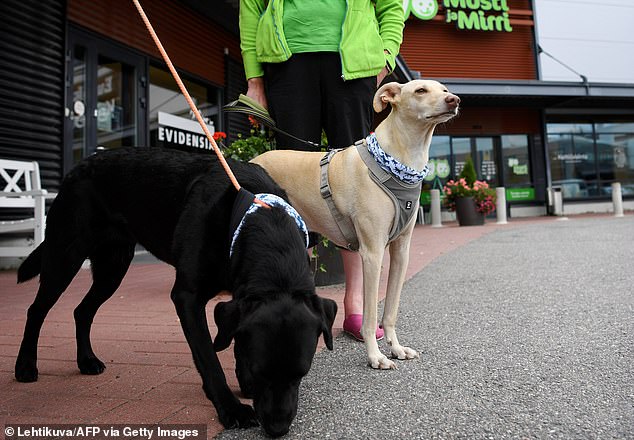 Sniffer dogs Miina (left) and Kossi outside Helsinki airport. They were able to detect the virus because the infection causes changes in body odour

The three dogs involved in the Finnish study - named Miina, Kossi and Valo - had a near 100 per cent success rate in detecting the virus, said lead researcher Anna Hielm-Bjorkman.

'They're actually finding PCR negatives that are going to be PCR positives in a week's time,' she told The Times.

PCR is the type of test that is currently used around the world to diagnose Covid-19 and is considered the 'gold standard'. It stands for polymerase chain reaction and works by analysing genetic material in a nasal swab to look for signs of the virus.

SNIFFER DOGS AND COVID-19: WHAT YOU NEED TO KNOW

Dogs have an incredible sense of smell which has made them useful in the detection of diseases for decades.

The complex folded structure of their nasal cavity - which results in a huge surface area - is home to over 300million scent receptors compared to 5milllion in a human, according to researchers at London School of Hygiene & Tropical Medicine (LSHTM).

Over the past 10 years, the research group Medical Detection Dogs has published in numerous scientific journals, demonstrating that the dogs’ accuracy in detecting the odour of disease is reliably between 85 and 90 per cent.

And in July, researchers in Germany found trained sniffer dogs can detect the coronavirus in human swab samples with 94 per cent success rate.

LSHTM, in collaboration with Medical Detection Dogs (MDD) and Durham University, have been rigorously testing whether six dogs can detect coronavirus smells through an intensive training programme, which was announced in May.

PREV Finder chief operating officer Jeremy Cabral reveals how he became rich
NEXT Time's Up organization raised $3.6m in 2018 but most of the cash went on ...