An official prediction that coronavirus deaths would soon pass those registered in the first wave has been quietly corrected by the government, it emerged last night, because they were too high.

The projections led to the country being hit with a second national lockdown and were shown at a Downing Street press conference last Saturday.

They claimed that England would see up to 1,500 deaths a day by early December, far higher than the peaks of deaths recorded in the first wave.

However, the figures, which caused alarm across the country, have now been amended 'after an error was found'.

The revised figures now suggest the second peak is likely to be on par with the first with the worst-case scenario at 1,010 deaths a day by December 8 – a similar figure to that seen in April.

Predictions for hospital admissions were also revised from 9,000 by early December to 6,190. 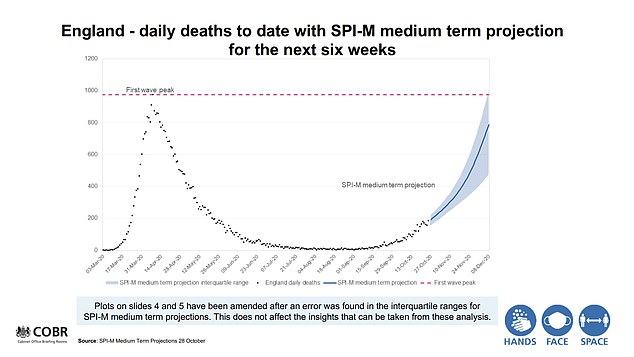 The revised figures now suggest the second peak is likely to be on par with the first with the worst-case scenario at 1,010 deaths a day by December 8 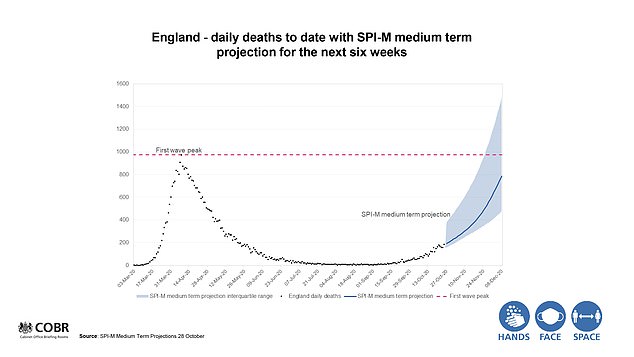 The slides now contain a note which says: ‘Plots on slides four and five have been amended after an error was found’

According to the Daily Telegraph, the slides now contain a note which says: ‘Plots on slides four and five have been amended after an error was found’.

The shocking new revelation comes just days after the government was savaged by critics for a separate worst case scenario claim that deaths could hit 4,000 a day by next month.

Professor Whitty conceded that the 4,000 daily deaths prediction was unlikely to come true because the modelling was a worst-case scenario based on a situation where no extra measures were brought in.

And former PM Theresa May delivered a damning assessment of Mr Johnson's handling of the situation, saying the controversial claim was 'wrong before it was even used'.

Pressure will now continue to pile up on the government with the latest revelation.

But Boris Johnson, looking even more unkempt than usual despite his pre-lockdown haircut, insisted: ‘We try to make things as clear as we possibly can.’ 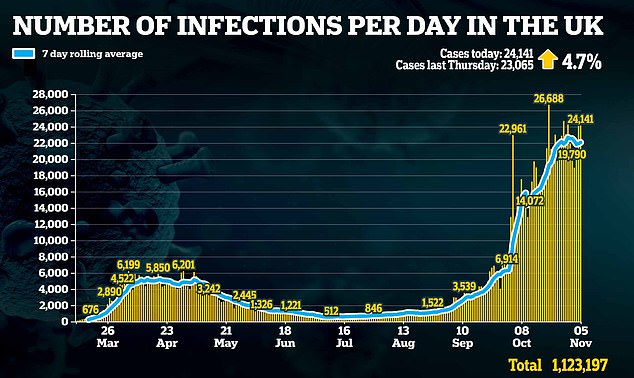 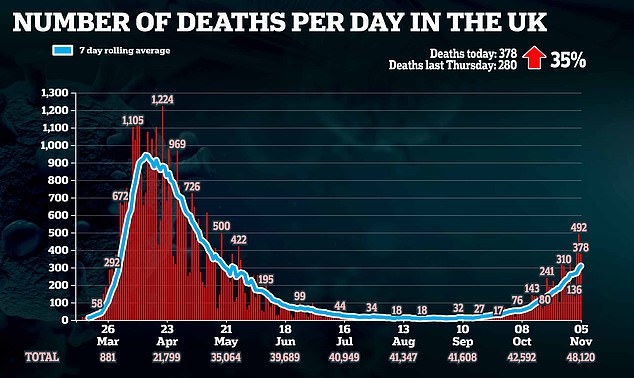 Another 378 deaths were announced on Thursday, a 23 percent drop in fatalities compared to yesterday

The UK Statistics Authority said the Government and devolved administrations must make clear the source of data used in public briefings and the full figures behind it. It added: ‘The use of data has not consistently been supported by transparent information being provided in a timely manner.

‘As a result, there is potential to confuse the public and undermine confidence in the statistics.

‘It is important that data are shared in a way that promotes transparency and clarity. It should be published in a clear and accessible form with appropriate explanations of context and sources. It should be made available to all at the time the information is referenced publicly.’

The watchdog added: ‘It is clear that those working on the pandemic face significant pressures. But full transparency is vital to public understanding and public confidence in statistics and those who use them.’

PREV CNN's Jim Acosta taunts Trump as he storms off stage after tirade
NEXT Secrets of an Uber driver: Melbourne Driver covertly records dozens of ...