Cracker Barrel apologizes after a customer said a decoration hanging from a restaurant ceiling looked like a 'noose' Cracker Barrel has apologized after customers reported seeing what appeared to be a 'noose' on display at its East Windsor, Connecticut location A Twitter user shared two snaps of the noose dangling from the ceiling Monday The restaurant clarified that the rope was actually wrapped cord attached to an antique electric soldering iron on display They apologized saying the resemblance was 'completely unacceptable' and the item was removed that same day Local activists met with restaurant manager Mark Smith to discuss the offensive symbol and search the restaurant for other potentially offensive decorations

The restaurant chain Cracker Barrel has apologized after customers became upset after seeing what appeared to be a 'noose' hanging from the ceiling at one of its Connecticut locations.

Twitter user Alfonso Robinson posted two images of the noose on Twitter on Monday saying: 'Someone at Cracker Barrel in East Windsor need to explain why there are nooses on the ceiling...#notagoodlook.'

The restaurant then clarified that noose wasn't intentional and it was actually wrapped cord that was attached to one of the location's vintage decorations, but still admitted it was 'completely unacceptable' that employees didn't notice the disturbing resemblance it had.

'This antique electric soldering iron has an original wrapped cord that should not have been displayed. We have removed the item from our East Windsor store. Many thanks to the guest who notified us of this so that we ould correct our error,' the restaurant added. 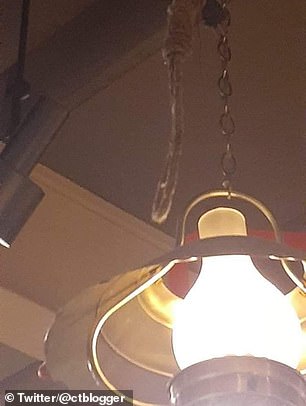 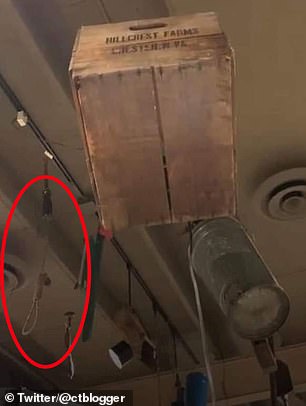 Cracker Barrel has apologized after customers reported seeing what appeared to be a 'noose' on display at its East Windsor, Connecticut location. Twitter user Alfonso Robinson shared these two images of the noose on Twitter on Monday

PREV Backpackers are paid as little as $3 an hour picking fruit
NEXT Richmond Tigers AFL star Marlion Pickett opens up in book Belief on troubled ...