Teenage girl, 19, allegedly held down and raped by NRL star Jack de Belin and his teammate failed to mention their was a third man in the house - and police NEVER asked her, jury hears A lead detective in the case didn't pursue a discrepancy in police statements  Police officer, who cannot be named, was cross-examined by de Belin's barrister De Belin and Callan Sinclair are accused of raping a woman, 19, in Wollongong  The pair have pleaded not guilty to the aggravated sexual assault charges

A teenage girl who was allegedly raped by NRL star Jack de Belin and his teammate initially didn't tell police there was a third man in the apartment at the time, a jury has heard.

The court heard lead detective investigating the case did not pursue the discrepancy in police statements of central importance to the case.

The police officer, who cannot be named for legal reasons, was cross-examined by de Belin's barrister, David Campbell SC, on Tuesday in Wollongong's District Court about witness statements that differed from the complainant's.

When the teenager initially accused the key St George Illawarra player and his friend Callan Sinclair of raping her in a Wollongong unit in December 2018, she never mentioned to police that another man was present in the apartment.

Jack De Belin, 29, has pleaded not guilty to the aggravated sexual assault of a 19-year-old woman in Wollongong in 2018 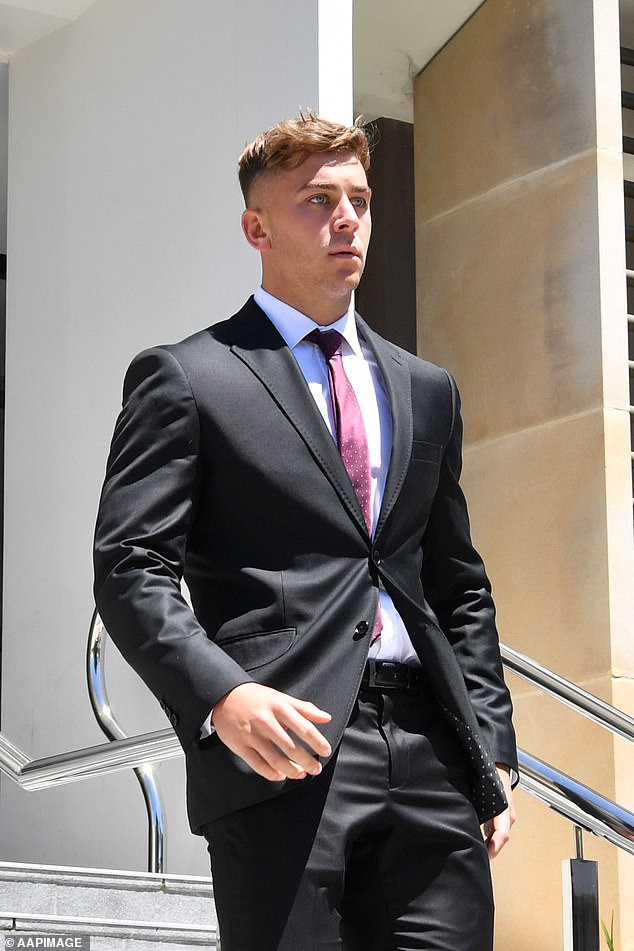 De Belin, 29, and his 23-year-old friend have pleaded not guilty to the aggravated sexual assault of a 19-year-old woman after meeting her in a bar nearby.

Two witnesses who made police statements around the time of the alleged assault said the woman had mentioned seeing another male in the vicinity.

But the lead investigator who took the complainant's