Health experts are warning that daily deaths from COVID-19 in the United States could double to 4,000 within the next ten days due to the impact of the colder weather and Thanksgiving travel.

They caution that despite the prospect of a vaccine, the country's outbreak is far from over and could be 'rounding the corner into a calamity' after hitting a record 90,000 hospitalizations on Thursday.

It comes as Dr. Anthony Fauci, the nation's top infectious disease expert, says that Christmas and the New Year won't be any different to Thanksgiving, as he projected rising coronavirus cases throughout December.

The US hit over 13 million infections on Black Friday as 205,000 new cases were recorded, likely consisting of some Thanksgiving figures when 20 states did not report any data.

It marked the country's 25th consecutive day with more than 100,000 new cases.

There have been more than 264,000 deaths in total, with five states setting death records this week and 23 states reporting higher case counts than last week.

The US reported less than 1,000 daily deaths only twice in the last week, while the two days prior to Thanksgiving each saw more than 2,000 American deaths. 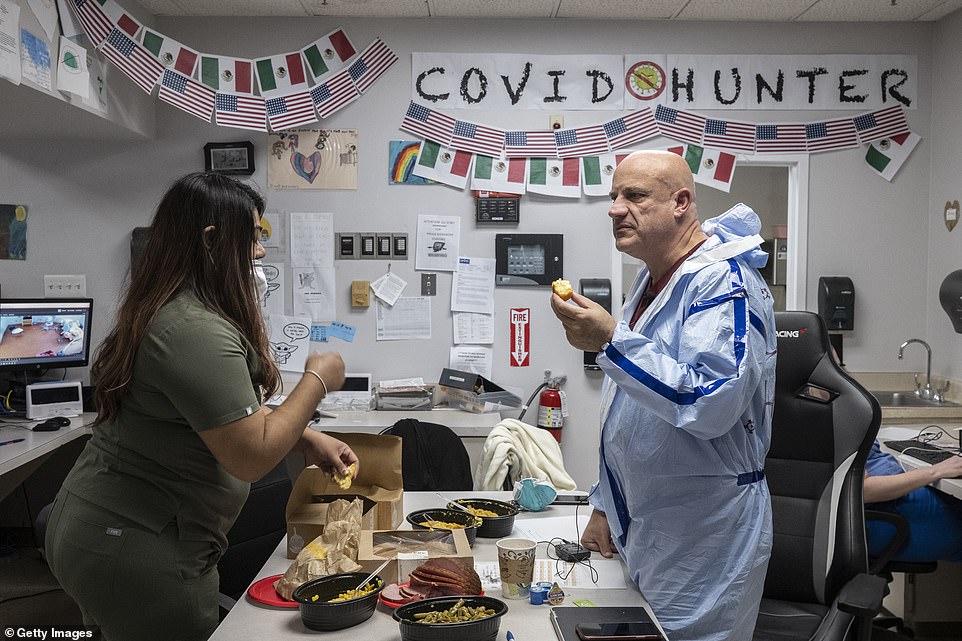 Dr. Anthony Fauci has warned that Christmas and the New Year will need to have muted celebrations due to the threat of coronavirus spread at family gatherings. Pictured, a nurses station celebrates Thanksgiving in Houston, Texas 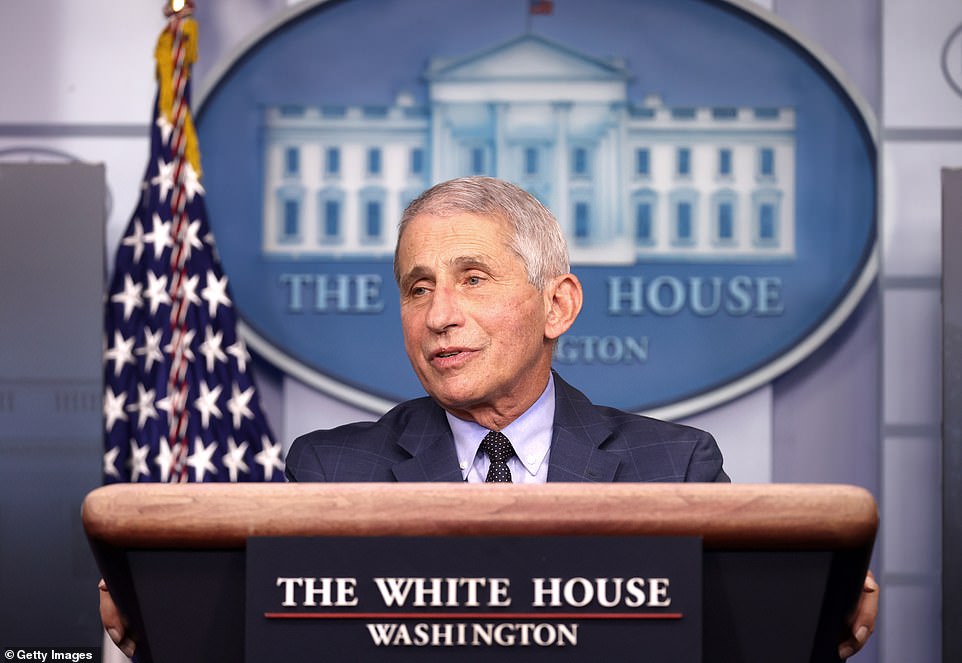 Dr. Fauci, pictured, warns that the holiday season will be difficult for Americans as he predicts rising COVID-19 cases 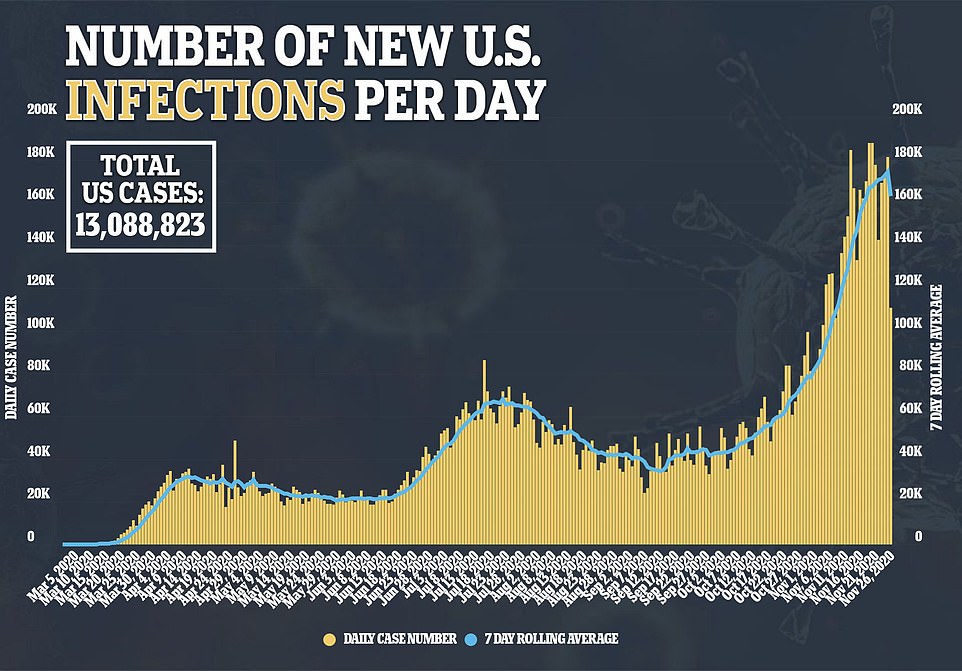 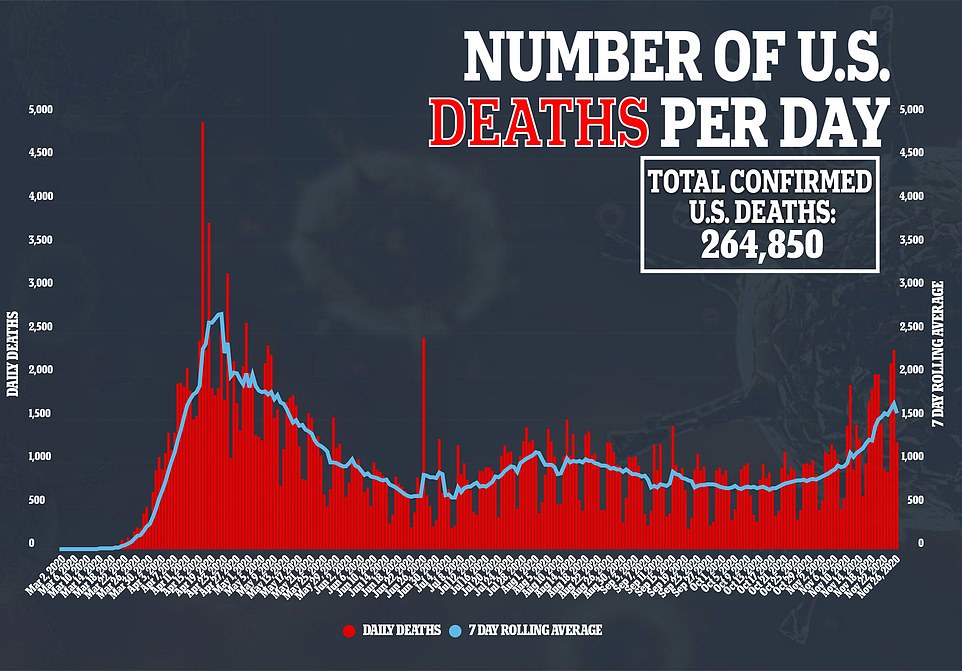 Experts believe these figures could climb even further as they warn Americans to 'hunker down' for a difficult winter.

Dr. Leana Wen, an emergency physician and a visiting professor at George Washington University Milken Institute School of Public Health, told CNN Friday that the country is far from rounding a corner.

'We cannot let our guard down,' she said. 'The vaccines will make a big difference in the spring and the summer; they're not going to make a difference right now.

This estimation was backed by Dr. Jonathan Reiner, a professor of medicine at George Washington University, who claimed the daily death toll will double within ten days.

Dr. Fauci has also warned of further deaths as he cautioned of a tough holiday season.

'If the surge takes a turn of continuing to go up and you have the sustained greater than 100,000 infections a day and 1,300 deaths per day and the count keeps going up and up ... I don't see it being any different during the Christmas and New Year's holidays than during Thanksgiving,' he told USA Today.

Fauci said that the current daily figures are so high that the country is left vulnerable if there is any surge in cases, as he predicts will happen throughout December and into the New Year.

He added that he and his family would be preparing for the remaining holidays in the same way as Thanksgiving, where his three daughters appeared via video chat while he and his wife enjoyed dinner by themselves.

'For my own family, I'm saying we had a really great Thanksgiving and Christmas last year,' he said.

'We're looking forward to a really great Thanksgiving and Christmas in 2021. Let's now make the best of the situation and show our love and affection for people by keeping them safe.

'Given the cold weather and given the fact that these types of celebrations – as wonderful and beautiful and traditional as they are – are fundamentally indoor things with people who will be singing and laughing and eating and drinking … you've just got to be careful,' he added.

Fauci had previously warned that a normal Christmas would be an impossibility this year, telling CNN's Jake Tapper 'it's not going to be a light switch' if a vaccine is approved.

'We're not going to turn it on and off. ... It's going to be a gradual accrual of more normality as the weeks and the months go by,' he cautioned.

The Centers for Disease Control had urged Americans to remain at home this Thanksgiving, stating on its website that 'gatherings with family and friends who do not live with you can increase the chances of getting or spreading COVID-19 or the flu' despite the loneliness and stress of the pandemic. 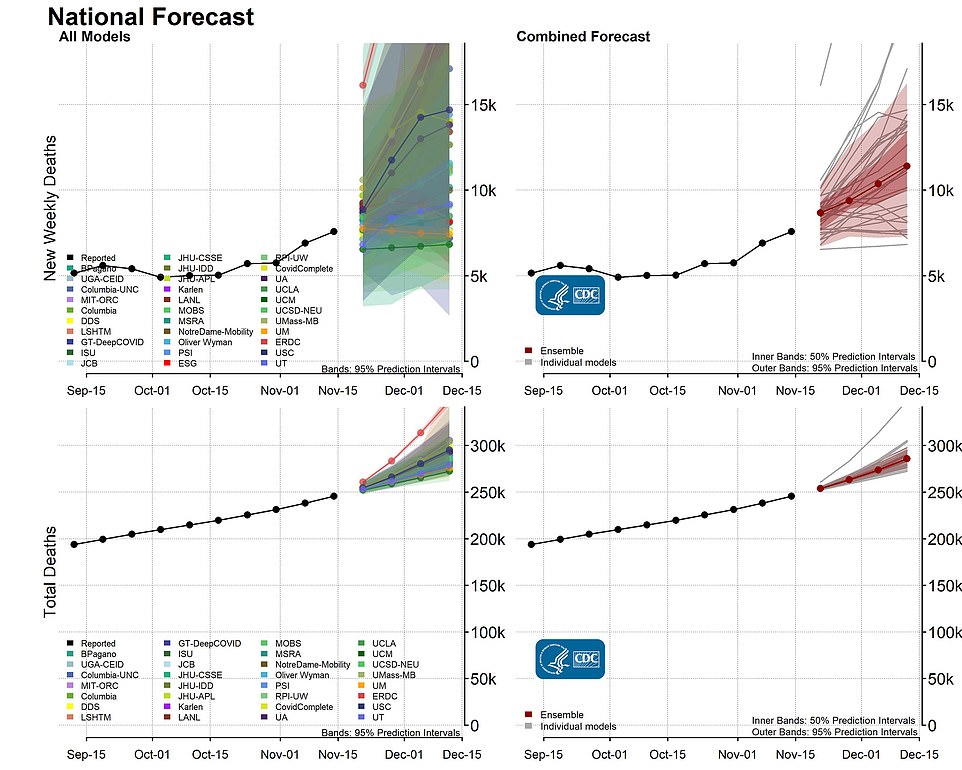 The CDC's latest forecast is predicting a total of 294,000 to 321,000 COVID-19 deaths by December 19. In that week alone, there is forecast to be up 21,000 deaths reported. The agency creates its forecast using predictions

Peter Thiel buys $18M waterfront Miami mansion which was featured in MTV's 'The ...