AFL star Marlion Pickett has told of his remarkable personal turnaround from a drug dealer who turned to burglary to fund his ice addiction to an admired athlete and doting father-of-four.

The 28-year-old is a household name among Tigers fans after starring in his debut for Richmond, which also happened to be the 2019 Grand Final when they thrashed Greater Western Sydney.

Though Pickett lived a very different life in his teenage years - during which he was jailed twice for a series of offences including grievous bodily harm and robbery.

After getting out of jail for the second time following a two-and-a-half year stint behind bars, the then-21-year-old's son Latrell didn't even recognise him as his father anymore.

Then last July, his close friend Sam Nannup - the brother of his partner Jess and Pickett's cell mate in prison - tragically took his own life.

The Richmond midfielder has opened up about his difficult and often heartbreaking rise to sporting stardom in his new book Belief. 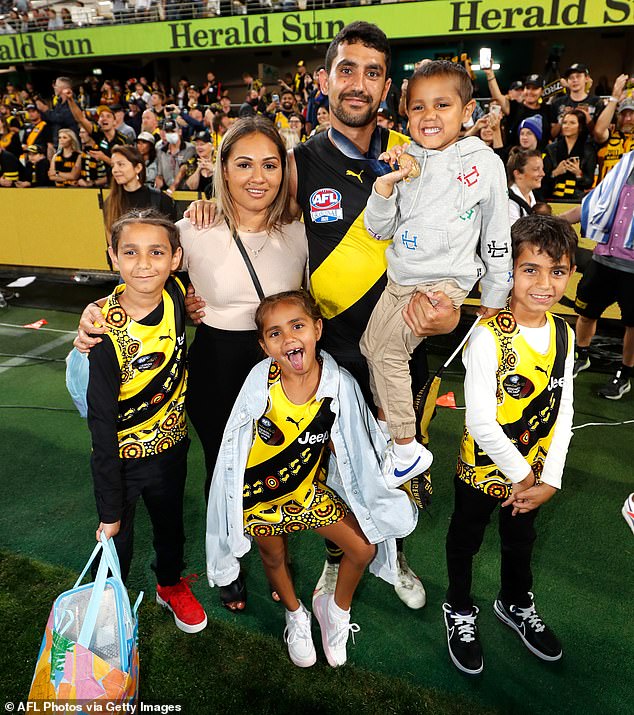 Richmond star Marlion Pickett with his partner Jess and children Marlion, Shaniquae, Levi and Latrell. The 28-year-old has endured a difficult and often heartbreaking rise to AFL stardom

Pickett was once a lost soul who hit rock bottom with a string of burglary offenses.

Back in 2010, while living aimlessly and using the drug ice, Marlion agreed to join mates in breaking into a shopping centre.

'Somebody said, "Let's do some shops",' Marlion recalls.

'We cruised around for an hour. We were after tools to smash our way through the glass doors of the shopping centre, so then we could do the easy shops in the middle courtyard.

'We found a cement truck with sledgehammers just lying in the back.'

With no security visible, the young men engaged in a brazen smash and grab exercise that would bring them to the attention of the police.

'We pulled the car up right out front of the shopping centre,' he said.

'I was excited, like a rush, but scared too. We got out of the car and smashed through the glass door. The three of us scattered, going for the small shops and kiosks in the centre. 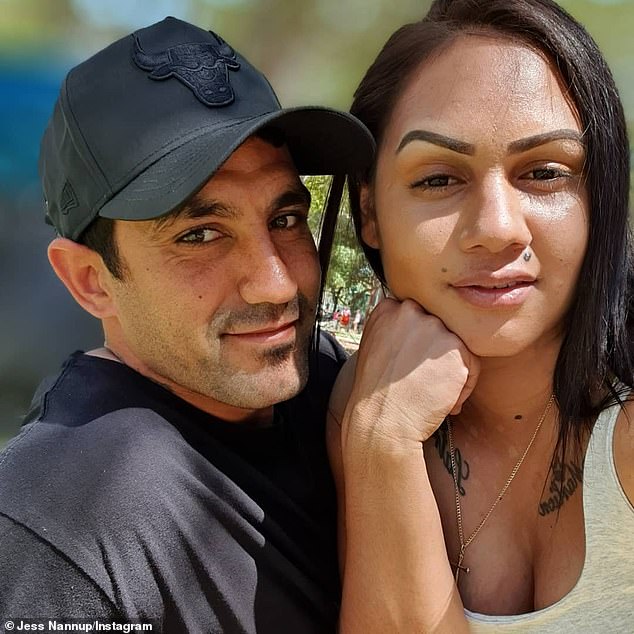 Pickett pictured with his partner Jess. The Richmond player was jailed twice for a series of offences including grievous bodily harm and robbery

'I remember a Lottery West agency. You try the till, look for the lockbox. I found it, smashed it open with the sledgehammer.

'I didn't think about it till much later: this was somebody's business. I just wanted the cash and to get out of there.' With alarms sounding Marlion knew the police must be on their way.

'I was terrified of being caught in the shop or something.

'Let's go, let's go, we was shouting. We raced outside to the car and sped off.'

The young men then splurged their takings on celebrating, visiting nightclubs and the casino – and the money was all gone within a week.

They then planned another job, although Marlion knew he would soon get caught.

And sure enough – the police soon arrived at his home, leading to a fateful stint in prison that would change his life forever.

Although his ALF career has taken him to the heights of success, Richmond Football Club star Marlion Pickett has always put family first. 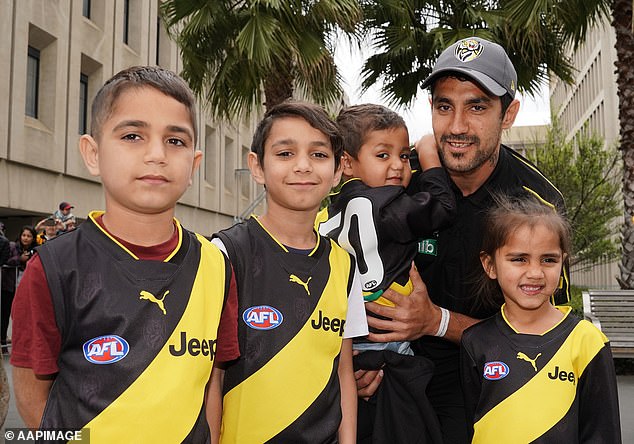 Marlion Pickett poses with his children Marlion, 9, Latrell, 8, Shaniquae, 4, and Levi, 2 during the AFL Grand Final Parade in September 2019

So when his tight-knit world was rocked by a shocking tragedy, the then rising star and his partner Jess were hit particularly hard.

Speaking of his personal heartbreak in his new book, Marlion revealed how the death of his good friend, and Jess' brother, Sam Nannup, left him devastated.

Sam and Marlion had a long history – Sam had requested to be Marlion's cell mate during his stint in prison, and the family were particularly tight. 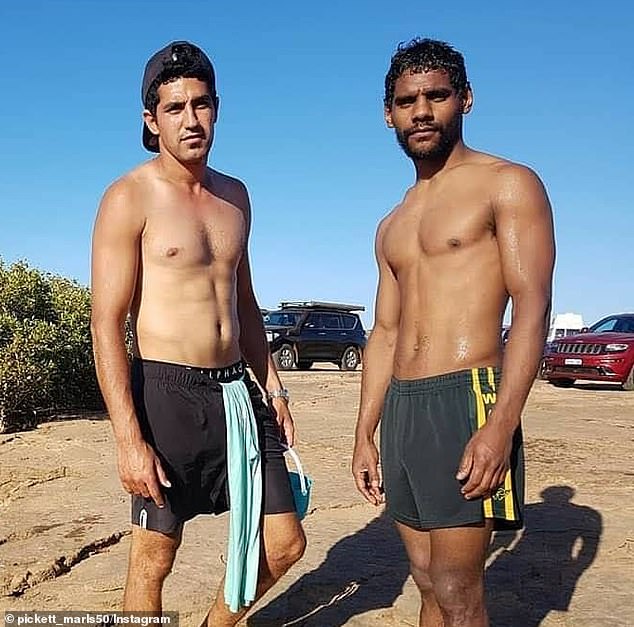 'Then she came back in and signalled we all had to leave.'

It was then that Jess related the news that Sam had taken his life – news they had to withhold from their young children.

'I thought that the aunties or cousins or the women of the family would tell Sam's daughter about her dad, but they couldn't. So they asked me to do it,' Marlion recalls.

'It was the hardest thing I've ever had to do in my life, telling a ten-year-old girl her father had passed. It broke my heart.' 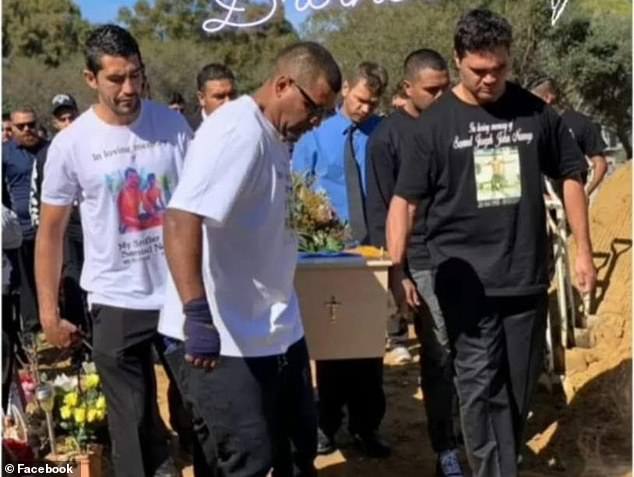 Friend Anthony Van Der Wielen recalls answering a call from Marlion that revealed the scale of his devastation.

'Marlion is as tough as they come and never asks for anything, but he was in tears. I said, what's going on, brother? And then he told me Sam had taken his own life. He was devastated.'

While Marlion tried to return to training, he was consumed with feelings of guilt and sadness over Sam's tragic death, wondering what he could have done to avert the tragedy. 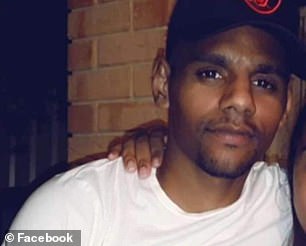 'I guessed he might be struggling,' Marlion recalls of the last time he saw him. 'He was just sitting there and I thought about getting up and going to speak with him, but I was just too tired.'

Jess was also left shell-shocked by the devastating turn of events.

'We were very close,' she says. 'I knew he was doing it tough but he was normally such a bubbly person.'

With his family in mourning and burgeoning football career hanging in the balance, the star would need all his strength and commitment to pull through for those who depended on him.

And that's just what he was determined to do.

Pickett now finds himself at the top of his game and loved by fans around Australia, but the star has endured troubles in the

Kate Beckinsale, 47, pulls down her face mask to smoke a cigarette