Urgent calls for compulsory Covid testing for passengers returning to Australia as UK strain arrives in the country Calls for Australians returning home to be tested for coronavirus before flight  They would have to return a negative test before they were able to board plane Comes after the more infectious UK variant was found in quarantine passengers Flight crews should also be tested and quarantined across nation, politicians say

By Bryant Hevesi For Daily Mail Australia and Aap

There are urgent calls for compulsory testing for passengers returning to Australia as the highly infectious UK mutant coronavirus strain arrives in the country.

Western Australia Premier Mark McGowan has led the calls after confirming three people in hotel quarantine in Perth have the more transmissible variant.

'I think it would be a great safety mechanism to ensure that people coming out of many countries around the world have a test and confirm they are negative before they board a flight with hundreds of other Australians,' he said. 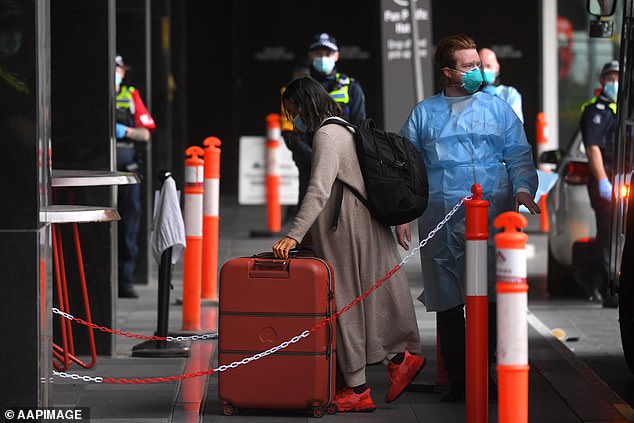 Travellers to Australia should be tested for coronavirus and return a negative result to board a flight, Western Australia Premier Mark McGowan says. Pictured, a returned Australian entering hotel quarantine in Melbourne

'And I think that safety measure should be implemented. To me, this is a no-brainer.'

The UK variant is believed to be up to 70 per cent more infectious than the original, causing havoc in England and prompting British Prime Minister Boris Johnson to order a new national lockdown until at least mid-February.

Victoria has also called for flight crews to not only be tested but quarantined across the nation.

Eight flight crew have tested positive for coronavirus out of the 1096 who have arrived in Victoria over the past fortnight - double the rate of other returned travellers in hotel quarantine.

PAUL THOMAS on... quarantine for travellers