A further 529 Britons have died after testing positive for Covid as the country's daily death toll soars by nearly a third in just one week.

The total deaths recorded today marks a 30 per cent rise on the 407 reported on this day last week and is the highest Monday figure since April 20 when 570 deaths were reported.

But, in a positive sign that the UK's soaring case load may be levelling out, 46,169 people tested positive for the virus today - down 20 per cent in a week.

It comes after Boris Johnson met cabinet colleagues last night to discuss an even-tougher lockdown to get a grip on new Covid variant spreading rapidly throughout the UK.

Suggested measures include a ban on extended bubbles, compulsory mask-wearing outdoors and limits on exercise.

A Whitehall source told MailOnline ministers have discussed going as far as saying people can only leave the house once a week - although No10 today denied this was on the cards saying the focus was on 'bolstering enforcement and policing'. 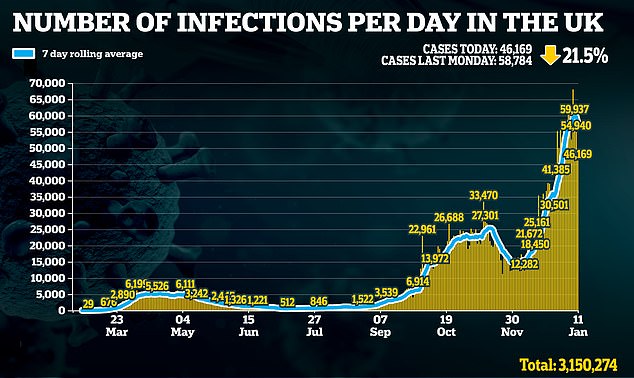 Under current rules, Britons can exercise with one other person or with their household or support bubble.

But a Government source said the rule is 'being used as an excuse for people to go for a coffee in the park with their friends' and could be tightened, The Daily Telegraph reports.

Matt Hancock today revealed that 2.3million people in the UK have now had a Covid vaccine as the roll-out hits a rate of around 200,000 jabs per day.

Prime Minister Boris Johnson last week pledged to hit 200,000 doses a day by this Friday, meaning the target appears to have been hit early after the number of people to receive their first dose of the vaccine has almost doubled in a week, from 1.3m on Sunday, January 3, to 2.6m by today.

The sign that immunisations are scaling up as planned comes as welcome news alongside the fact that the number of people being diagnosed with coronavirus dropped today.

PREV Sea shanty has taken over TikTok as users upload their own renditions of the ...
NEXT UK officially exits the European Union mogaznewsen