More than 20 refugees detained in Melbourne for months after they were transferred from offshore detention will finally be released, according to detainees and refugee advocates.

At least 23 men have been told they will receive bridging visas and be released from the Park Hotel in Carlton on Wednesday.

They were transported by buses to the Melbourne Immigration Transit Accommodation (MITA) detention centre under heavy police presence to collect their possessions ahead of being released.

'Breaking: Twenty six refugees who were locked up in the Park prison have got their Bridging Visa right now. Congratulations!' detained Kurdish refugee Mostafa Azimitabar tweeted.

Refugee activists played music and sung songs during their daily vigil protest outside the Park Hotel on Wednesday. 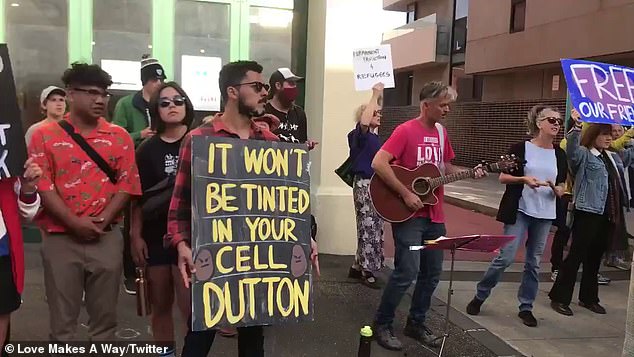 It's understood around 35 refugees remain detained at the accommodation, which was previously used as a quarantine hotel for returned travellers.

'Lots of singing at today's daily protest outside Park Hotel prison. Calling for freedom for those inside, for those in MITA and all who are cruelly detained by our government,' refugee activist group Love Makes a Way tweeted.

Later footage livestreamed by Campaign Against Racism and Fascism shows activists cheering as refugees were released at MITA.

'I appreciate what you're trying to do but just stand back,' a police officer instructs the activists.

The Park Hotel, along with Brisbane's Kangaroo Point Central hotel, has been designated as an 'alternative place of detention' by the federal government.

The men held in the hotels are all refugees or asylum seekers who were brought to Australia for medical treatment under the now-repealed 'medevac' legislation.

Many have been in detention for over a year, some for up to 18 months. 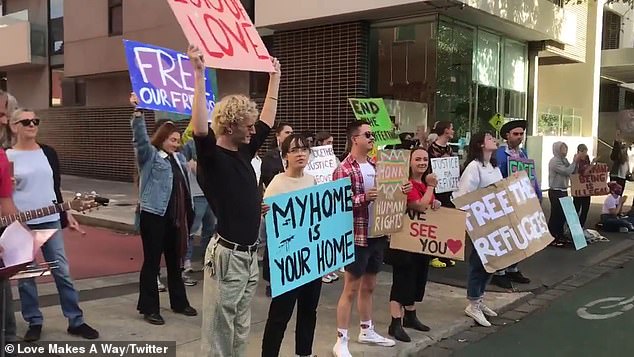 Those in the Park Hotel had previously been held in Preston's Mantra Bell City hotel, but were transferred in December.

The Department of Home Affairs confirmed a number of bridging visas were granted to refugees while they make plans to return home.

'A final departure bridging visa allows individuals to temporarily reside in the Australian community while they finalise their arrangements to leave Australia,' a spokeswoman told Daily Mail Australia.

'The individuals residing in the alternative places of detention were brought to Australia temporarily for medical treatment.'

'They are encouraged to finalise their medical treatment so they can continue on their resettlement pathway to the United States, return to Nauru or PNG or return to their home 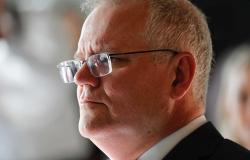