The NYPD has claimed a Jewish wedding attended by thousands of people in Brooklyn on Monday night was in compliance with state COVID-19 restrictions, despite pictures and video showing crowds of men packed together with no social distancing or masks.

Cops watched from a distance as Shlomo Halberstam, the 18-year-old son of the head of the Bobov Hasidic sect, married his bride in the outdoor parking lot of the Congregation Shaarei Zion synagogue in Borough Park before the celebrations moved inside.

Footage from the indoor ceremony showed Bobov Grand Rabbi Bentzion Halberstam, 65, celebrating in a white satin robe as hundreds of maskless men from the Hasidic Bobov community clapped from their seats.

According to PIX 11, guests traveled from as far as London and Israel for the prominent wedding, the latest in a string of large ceremonies held by the Brooklyn Hasidic community despite the ongoing coronavirus pandemic.

While cops were aware of the ceremony, PIX 11 reports, recent court rulings loosening the restrictions on religious ceremonies meant officers kept a step back. 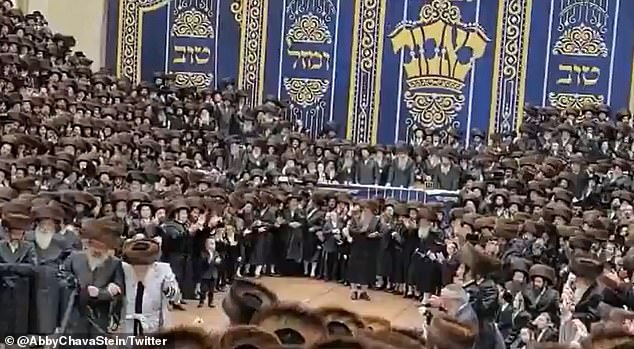 The wedding took place in the parking lot, but then continued inside where video shared to social media showed hundreds of men were packed together and not wearing masks 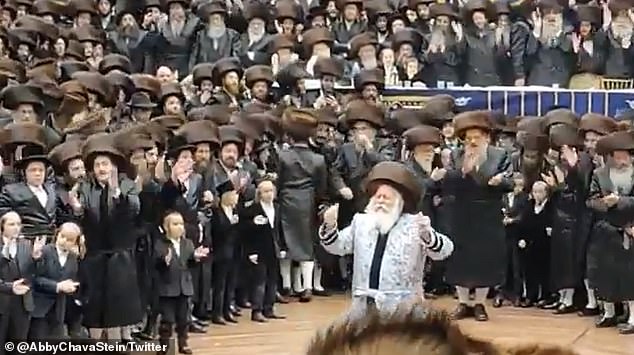 Pictured, Bobov Grand Rabbi Bentzion Halberstam, 65, celebrating in a white satin robe as hundreds of maskless men from the Hasidic Bobov community clapped from their seats

In November, the Supreme Court temporarily barred New York from enforcing certain attendance limits at houses of worship in areas designated as hard hit by the coronavirus.

The court on a 5-4 vote granted requests made by the Roman Catholic Diocese of Brooklyn and two Orthodox Jewish congregations.

It came after Governor Andrew Cuomo shut down non-essential businesses in targeted areas where infections have spiked, including some Brooklyn neighborhoods, on October 6.

The groups sued to challenge attendance limits at houses of worship in areas designated red and orange zones, where New York had capped attendance at 10 and 25 people, respectively.

The neighborhoods are now in yellow zones were attendance is capped at 50 percent of a building's capacity.

The congregations are expected to maintain social distancing.

Masks must always be worn if social distancing is not possible.

Jewish leaders in Brooklyn last year joined forces with the borough's Roman Catholic bishop to mount a successful legal challenge against the COVID-19 limitations on their services.

According to new state regulations in the wake of a November US Supreme Court ruling, religious ceremonies can be held with 50 percent capacity but social distancing must be in place and masks worn if that is not possible.

The synagogue in question has a capacity of 1,800, meaning it would be authorized for 900 people in attendance under the coronavirus distancing rules.

'Our assessment at this time is that the event was compliant with relevant guidelines,' New York City Sheriff Joe Fucito told the New York Post.

However, police also reported that 'fences set up with tarps attached, limiting view' were erected around the parking lot of the synagogue and there were 'multiple entrances' into the indoor part of the celebrations.

The ceremony had also allegedly been planned in secret in an attempt to thwart government officials, according to an Israeli news site, which published an article about the wedding praising the congregation's planning of the event.

'Conditions make it very difficult to hold mass events, but the Bobov Hasidic group, one of the largest Hasidic groups in the United States, did everything to make the read more from dailymail..... 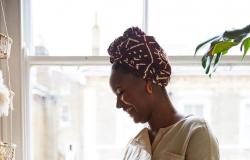 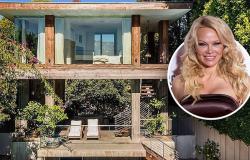 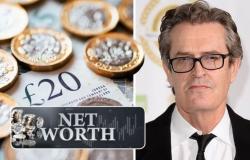 #RupertEverett net worth: My Best Friends Wedding actor has made millions ... 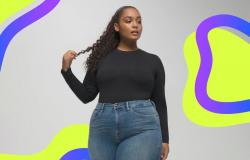 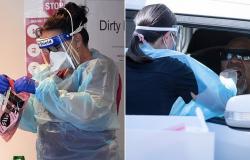