Senate Republicans have slammed Democrats for 'ramming' the COVID relief bill through Congress and said the American people 'deserve better' while Joe Biden has said the package puts the US 'back on the road to recovery'.

The $1.9trillion relief package passed through the Senate Saturday with Biden hoping to sign it into law next week once it passes the lower chamber.

The package, which received no Republican votes despite the president's hopes for bipartisan support, was instantly slammed by Republican lawmakers who blasted it a 'partisan wishlist.'

There was also criticism over the latest round of stimulus checks included in the bill with Louisiana Senator Bill Cassidy fuming that the funds will be sent to prisoners.

Meanwhile, Biden celebrated his win releasing a video Saturday night calling the package 'consequential' and saying help is on its way to Americans 'immediately.' 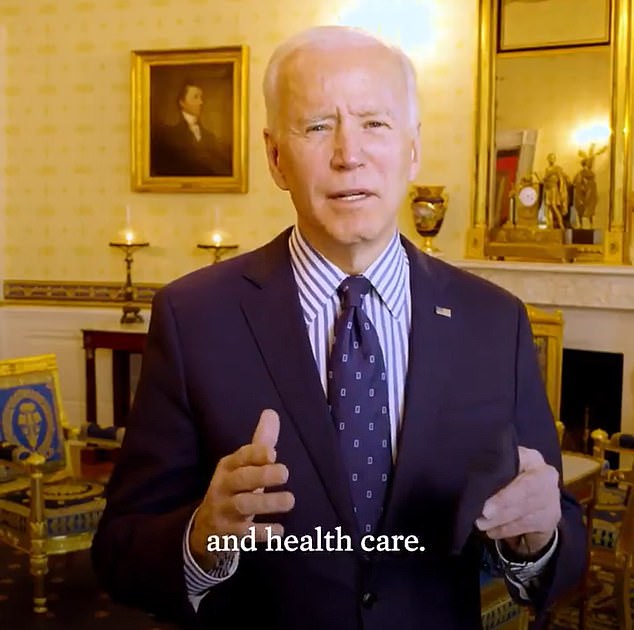 'It puts us back on the road to recovery - and beyond that - setting down new principles to care our children, our  families and healthcare,' Biden said in the video.

'There's so much more in it but the bottom line is it's going to start almost immediately.

'So thank you very much, keep the faith, there's so much more we have to do but this is consequential.'

The video, titled 'What will the American Rescue Plan do for you?', came after an equally jovial speech from the White House Saturday afternoon where the president hailed the 'bipartisan support of the American people' -  even though far-left Democrats can still block it in the House.

'This nation has suffered too much for much too long. And everything in this package is designed to relieve the suffering and to meet the most urgent needs of the nation, and put us in a better position to prevail,' he said.

'When we took office 45 days ago, I promised the American people help was on the way. Today I can say we've taken one more giant step forward on delivering on that promise — that help is on the way.'

Biden thanked Vice President Kamala Harris and senators 'who worked so hard to reach a compromise' after cuts to unemployment benefits were agreed to secure the support of moderate Democrat Joe Manchin.

Biden, who prides himself on his bipartisanship, tried to deflect attention from the lack of any Republican support for the bill by pointing to its overwhelming popularity among voters of all political persuasions.

'I really want to thank the American people for making all this possible,' he said. 'How did they make it possible? Quite frankly, without the overwhelming, bipartisan support of the American people, this would not have happened.' 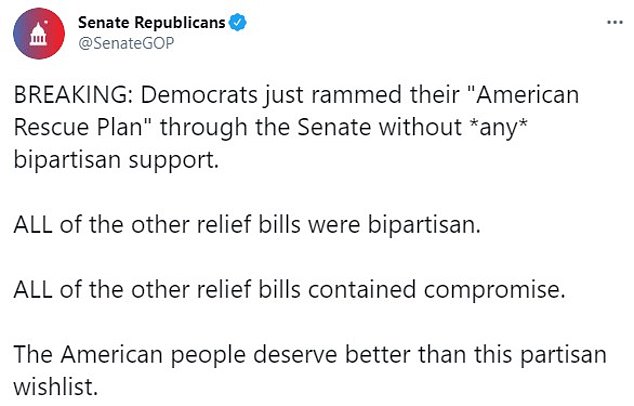 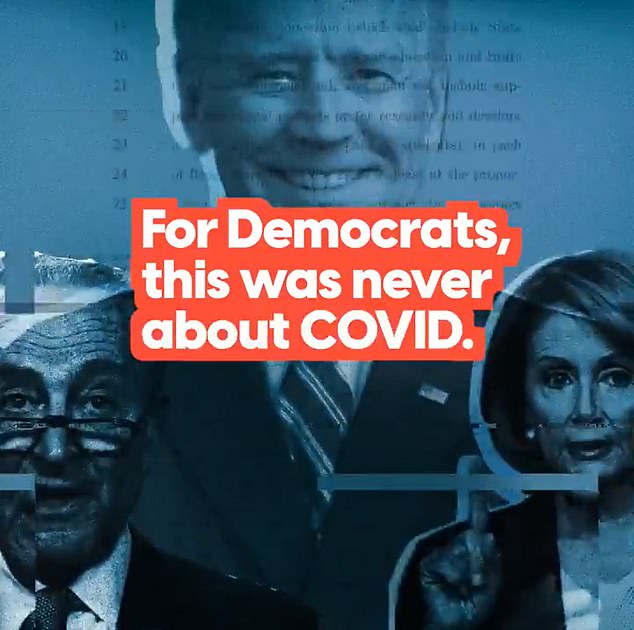 The package, which received no Republican votes despite the president's hopes for bipartisan support, was instantly slammed by Republicans who blasted it a 'partisan wishlist' in this  video posted online Saturday

Biden was later seen attending the Holy Trinity Catholic Church in the Georgetown neighborhood of DC.

The president hopes to sign the bill into law next week providing it passes the lower chamber, where it is being introduced in a substantially amended form due to opposition from moderate Democrats to some of its most generous provisions.

The package passed after cutting direct payments, reducing unemployment benefits and failing on $15 minimum wage. Biden hopes to give his signature to the bill next week, meaning $1,400 stimulus checks could soon be on their way to households across the country.

But Senate Republicans are far from happy with the outcome with the group releasing a scathing video slamming the package almost as soon as the votes were counted and hitting out at its lack of bipartisan support.

'Democrats just rammed their "American Rescue Plan" through the Senate without *any* bipartisan support,' the group tweeted.

'The American people deserve better than this partisan wishlist.' 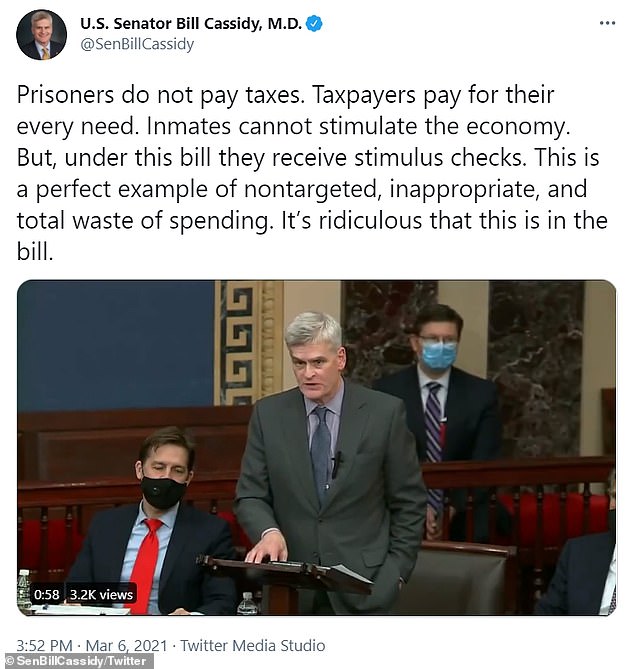 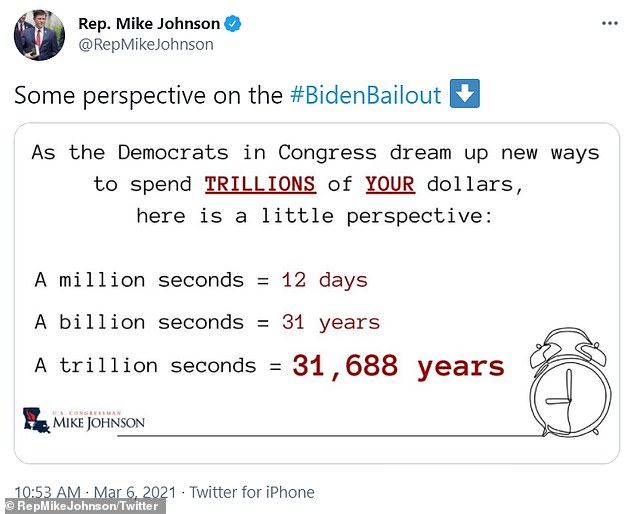 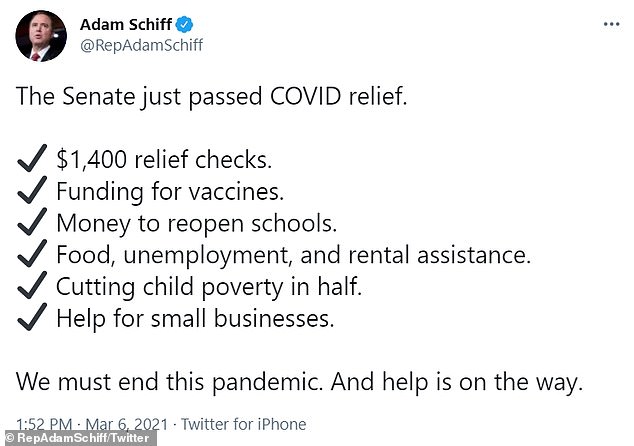 Like the bill, the reaction to it has been largely split down party lies with Democrats largely praising the outcome. 'Help is on the way,' tweeted Representative Adam Schiff

The video claims the bill 'was never about COVID' for the Democratic party and says the bill provides 'Golden State Bailouts... to states that stay closed and shortchange states that reopen.'

Senator Bill Cassidy also tweeted it is 'ridiculous' that prison inmates will receive the $1,400 stimulus checks through the bill when they 'cannot stimulate the economy.'

'Prisoners do not pay taxes. Taxpayers pay for their every need. Inmates cannot stimulate the economy,' he tweeted Saturday.

'But, under this bill they receive stimulus checks. This is a perfect example of nontargeted, inappropriate, and total waste of spending. It’s ridiculous that this is in the bill.'

Cassidy, together with Arkansas Senator Tom Cotton and Texas Senator Ted Cruz, are pushing to amend the bill to prevent prisoners receiving the checks. 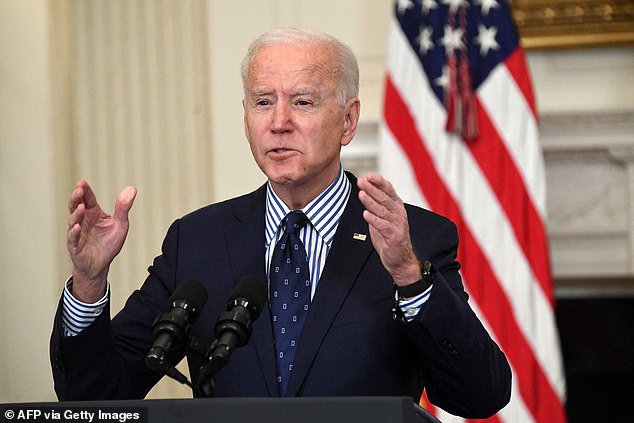 Biden hopes to sign the bill into law next week providing it passes the House, meaning $1,400 stimulus checks could soon be on their way to households across the country 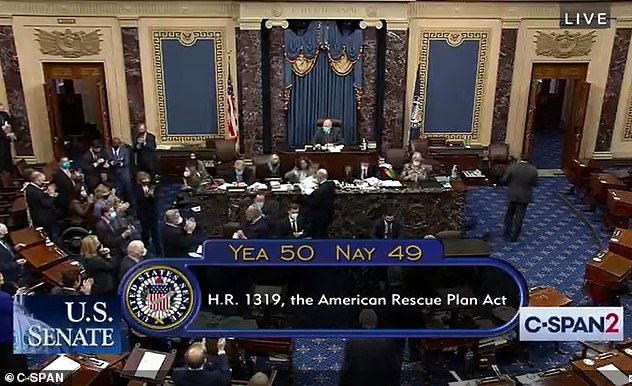 Senator Mike Johnson meanwhile also hit out at the package branding it the 'Biden Bailout' and suggesting Democrats are 'dreaming up new ways to spend trillions of your dollars.'

Like the bill, the reaction to it has been largely split down party lies with Democrats largely praising the outcome.

'Cutting child poverty in half. Help for small businesses. We must end this pandemic. And help is on the way,' tweeted Representative Adam Schiff.

Senate majority leader Chuck Schumer said after the bill's passing: 'We tell the American people: help is on the way'.

Citing the country's desire to return to normality, he added: 'Our job right now is to help our country get from this stormy present to that hopeful future.' 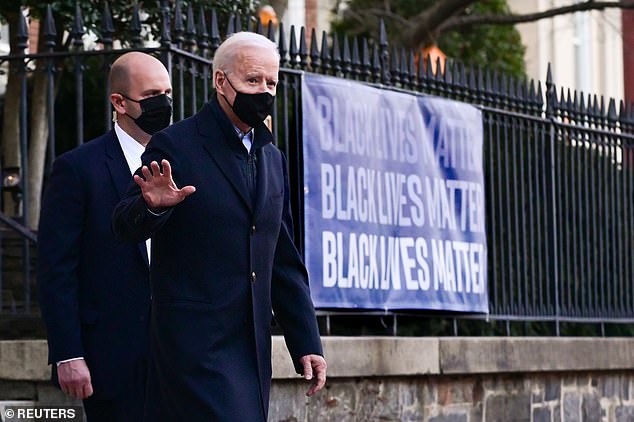 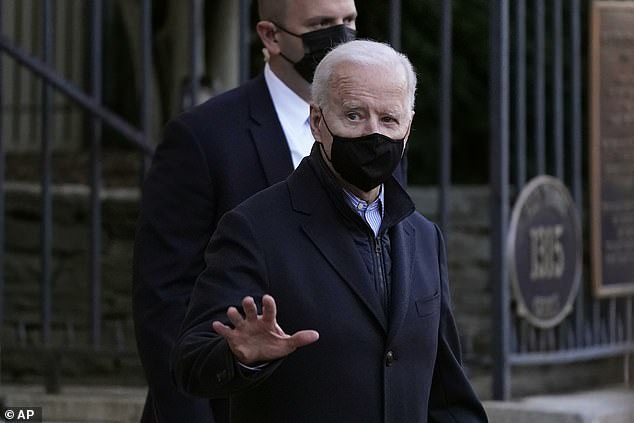 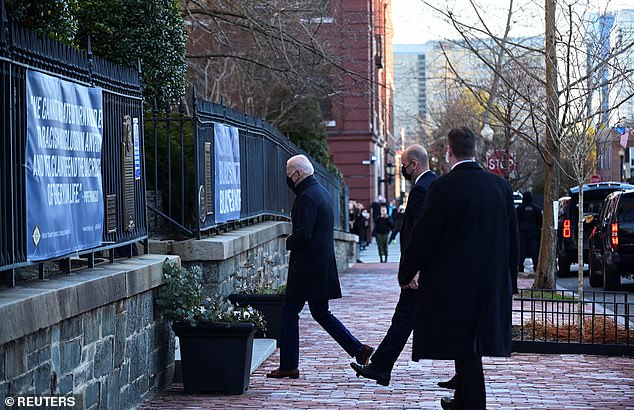 His visit came after he celebrated the passing of his $1.9trillion relief package through the Senate 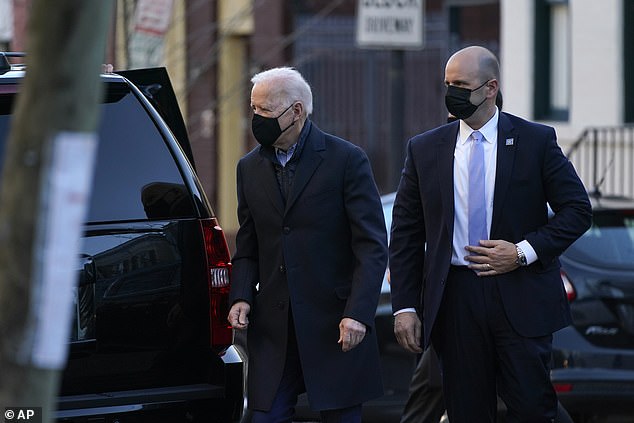 'It honors our heroes – our health care workers, food, sanitation and transportation workers, and teachers – who are on the frontlines on the state and local level.

'It crushes the virus with the equitable and immediate distribution of the vaccine. And it puts our children safely back in school and puts workers back on the job.'

Barack Obama tweeted: 'Elections matter—and we’re seeing why. Congratulations to the Biden Administration and to the American people on a COVID relief bill that will improve the lives of families across the country.'

And Hillary Clinton wrote: 'The American Rescue Plan is one of the most ambitious pieces of legislation in a generation. It will materially help families in dire need. It will help end this pandemic. It will cut child poverty in half. Lots more to do. But let’s celebrate this hard-fought progress.' 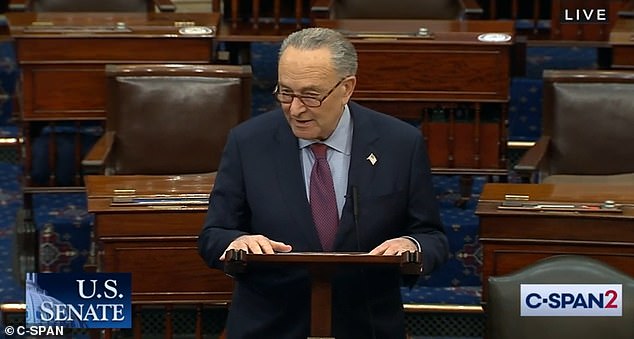 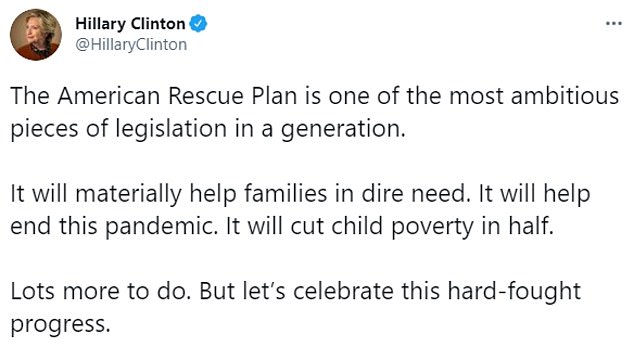 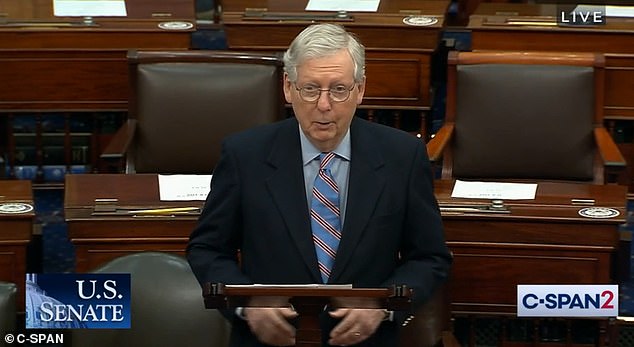 What does the COVID relief bill include

The size of the check will shrink for those making slightly more, with a hard cut-off at $80,000 for individuals and $160,000 for married couples. Most Americans will be getting the full amount. The median household income was $68,703 in 2019.

AID TO THE UNEMPLOYED: Expanded unemployment benefits from the federal government will be extended through Sept. 6 at $300 a week. That's on top of what beneficiaries are getting through their state unemployment insurance program. The first $10,200 of jobless benefits would be non-taxable for households with incomes under $150,000.

MONEY FOR STATE AND LOCAL GOVERNMENTS: The legislation will send $350 billion to state and local governments and tribal governments for costs incurred up until the end of 2024. The bill also requires that small states get at least the amount they received under virus legislation that Congress passed last March.

AID TO SCHOOLS: The bill will provide about $130 billion in additional help to schools for students in kindergarten through 12th grade. Spending for colleges and universities will be boosted by about $40 billion.

AID TO BUSINESSES: A new program for restaurants and bars hurt by the pandemic will receive $25 billion. The grants provide up to $10 million per company with a limit of $5 million per physical location. The grants can be used to cover payroll, rent, utilities and other operational expenses.

The bill also provides $7.25 billion for the Paycheck Protection Program, a tiny fraction of what was allocated in previous legislation.

TESTING AND VACCINES: The bill provides $46 billion to expand federal, state and local testing for COVID-19 and to enhance contract tracing capabilities with new investments to expand laboratory capacity and set up mobile testing units. It also contains about $14 billion to speed up the distribution and administration of COVID-19 vaccines across the country.

HEALTH CARE: Financial assistance for ACA premiums will become considerably more generous and a greater number of solid middle-class households would qualify. Though the sweetened subsidies last only through the end of 2022, they will lower the cost of coverage and are expected to boost the number of people enrolled.

BIGGER TAX BREAKS FOR HOUSEHOLDS: Under current law, most taxpayers can reduce their federal income tax bill by up to $2,000 per child. In a significant change, the bill will increase the tax break to $3,000 for every child age 6 to 17 and $3,600 for every child under the age of 6.

The bill also significantly expands the Earned Income Tax Credit for 2021 by making it available to people without children. The credit for low and moderate-income adults would be worth $543 to $1,502, depending on income and filing status.

RENTAL AND HOMEOWNER ASSISTANCE: The bill provides about 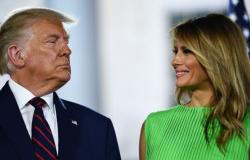 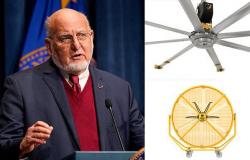 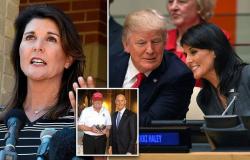 Nikki Haley says she would support Trump again and would defer to him on White ... 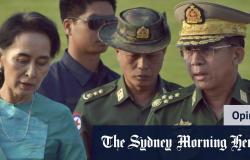 Trump’s example playing out in Asia, the world has to intervene mogaznewsen

'I was bullied out of my job': Christine Holgate comes out swinging at ...