The police officer who shot dead a 20-year-old black man during a traffic stop in Minneapolis has been named as Kimberly Potter, a 25-year veteran of the force.

Potter, 48, can be heard saying 'holy sh*t, I shot him' after allegedly accidentally firing her gun instead of her taser during a struggle with Daunte Wright on Sunday.

Potter is a married mother of two, who was first licensed as a police officer in Minnesota in 1995 at age 22, according to state records obtained by the Star Tribune. 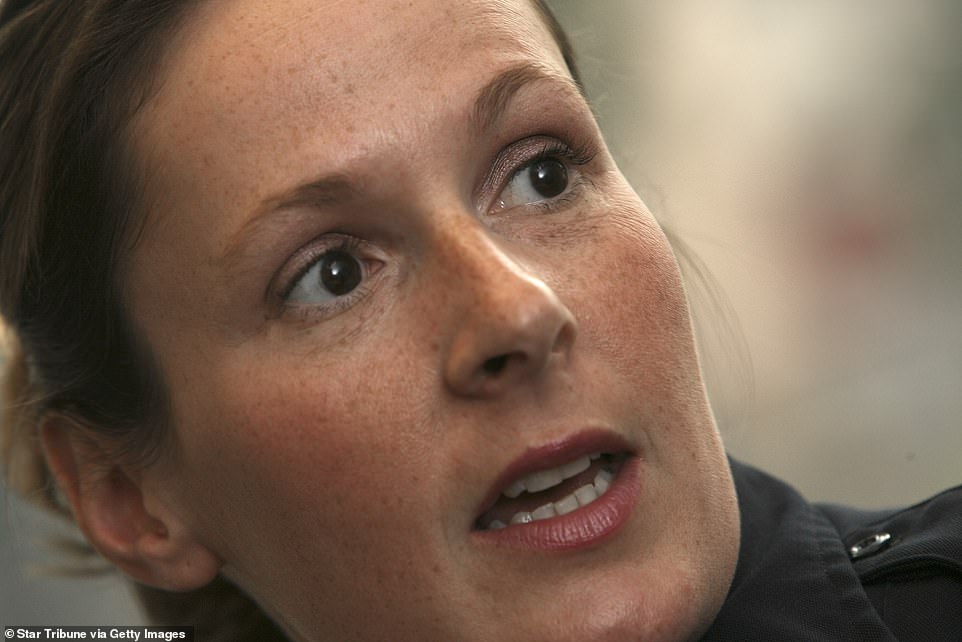 Kimberly Potter, pictured, has been named as the police officer who shot and killed Wright 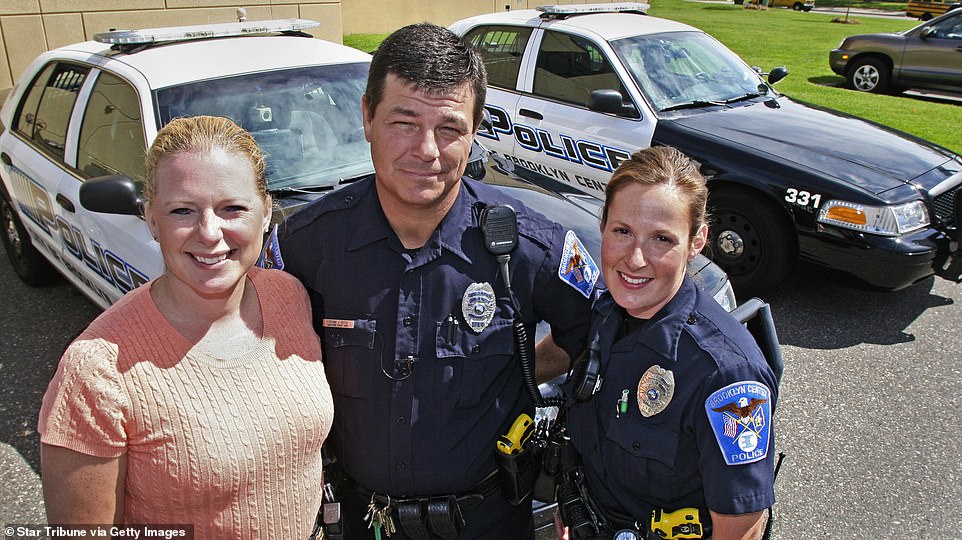 Potter, right, is pictured with her colleagues on the Brooklyn Center Police Negotiation Team in 2007 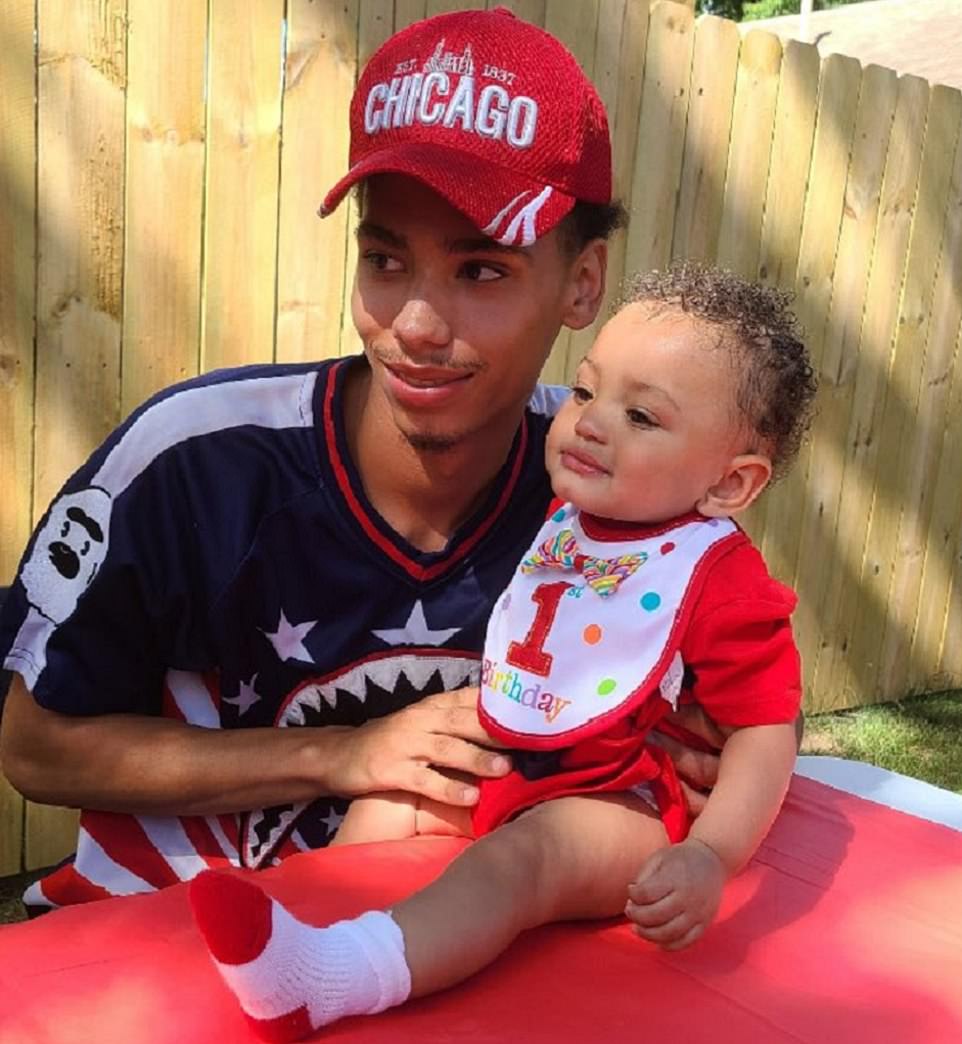 Daunte Wright, 20, was shot dead on Sunday afternoon in Brooklyn Center after he was pulled over during a traffic stop for what his mother said was air fresheners dangling from his rear-view mirror. He is pictured here with his one-year-old son Daunte Wright Jr.

She has two adult sons and lives with her husband, a former Fridley police officer, in a different Minneapolis suburb, the paper reported.

She had annual salary of $86,190, according to public records.

Wright was shot dead on Sunday afternoon after he and his girlfriend were pulled over during a traffic stop for what police say was an expired car registration. The officers then learned Wright, who has a toddler son, had an outstanding warrant against him. 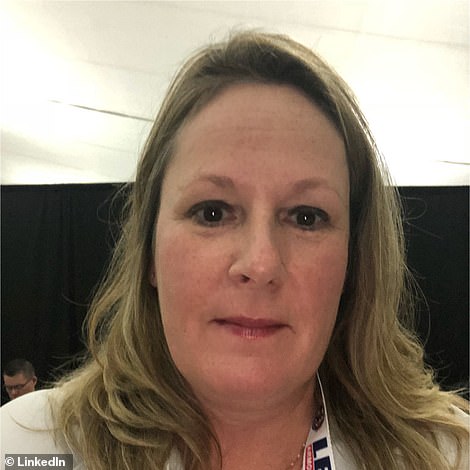 The Hennepin County medical examiner on Monday evening ruled his manner of death was homicide and said the cause of death was a gunshot wound to the chest.

During a tense press conference, Gannon released the bodycam footage of the incident that showed three officers approaching Wright's car after he had been pulled over for the traffic stop.

The footage showed one officer trying to handcuff Wright as a second officer told him he was being arrested on a warrant. Wright immediately jumped back into his car in an apparent attempt to flee.

A struggle then broke out between the officers and Wright, who was still sitting inside his car.

Potter could be heard shouting 'Taser!' several times in the moments before she fired her gun.

Immediately after, Potter can be heard saying: 'Holy sh*t. I shot him'. It appears she dropped her gun in the aftermath.

Gannon said he did not believe a gun was retrieved from Wright's car.

Wright managed to drive several blocks before coming to a stop when he hit another car. He was pronounced dead at the scene and his girlfriend, who was a passenger in the car, sustained non-life-threatening injuries. 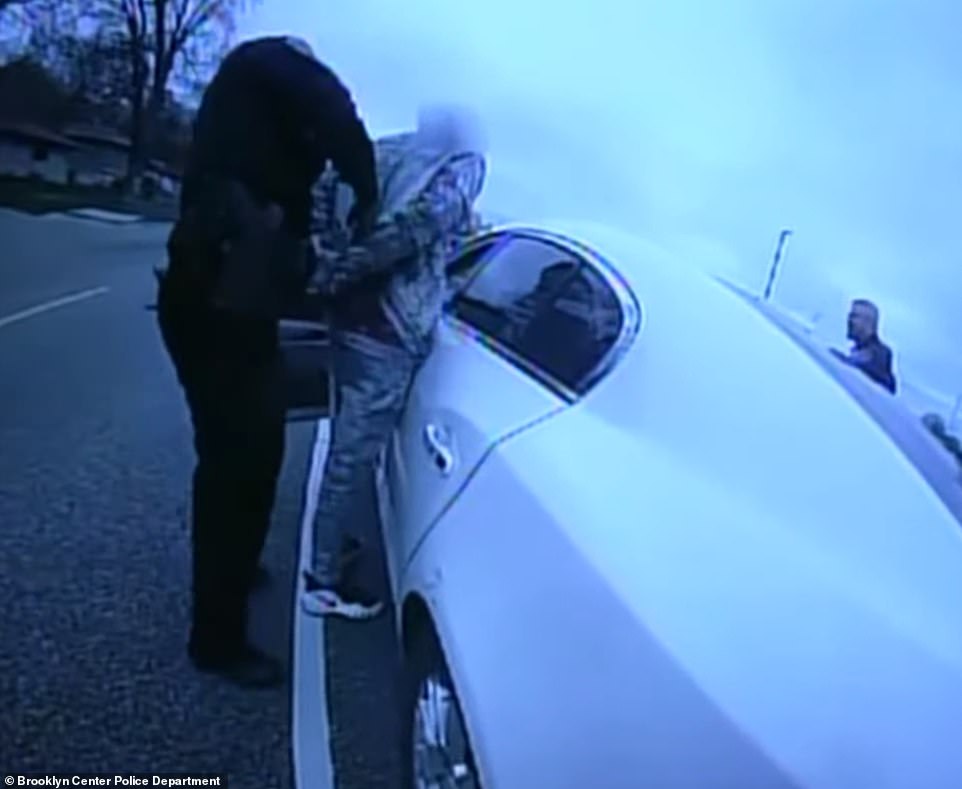 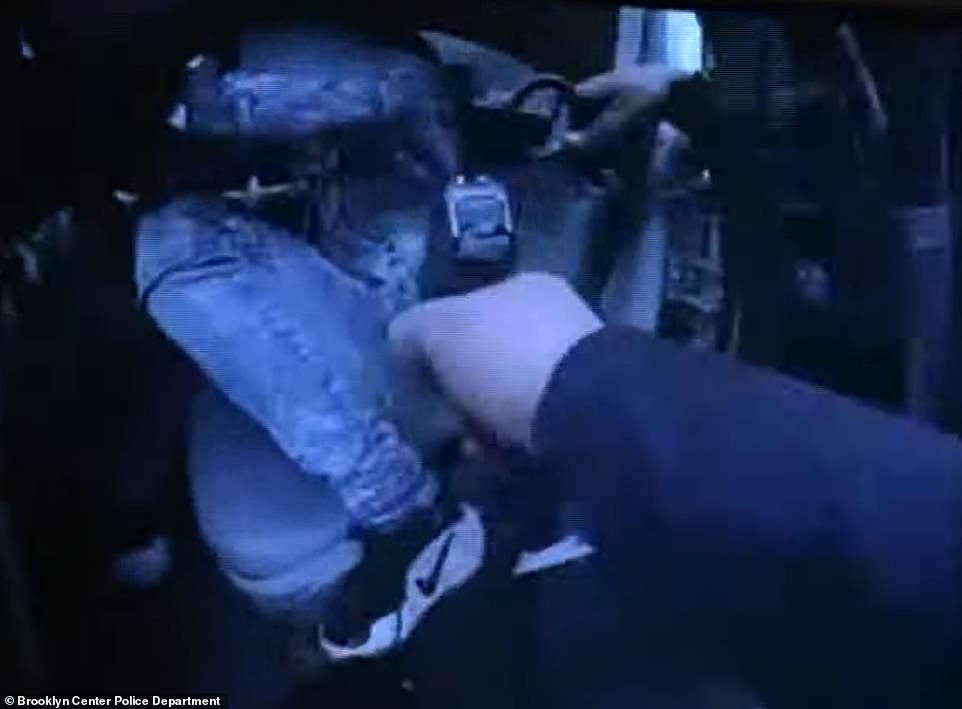 Potter could be heard shouting 'Taser!' several times in the moments before she fired her gun. Immediately after, she can be heard saying: 'I shot him'. It appears she dropped her gun in the aftermath 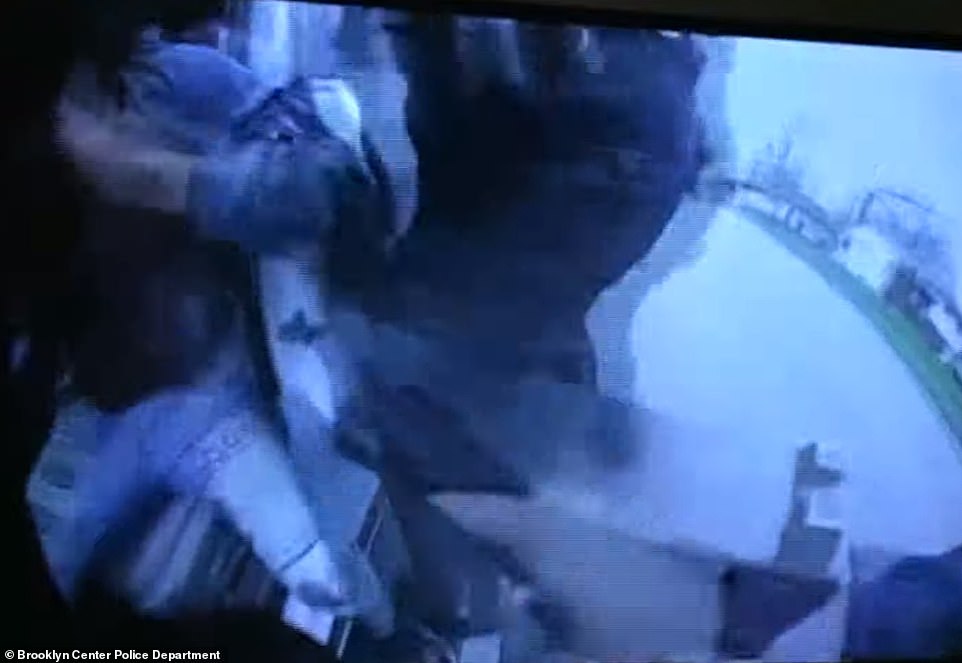 After being shot, Wright managed to drive several blocks before coming to a stop when he hit another car. He was pronounced dead at the scene and his girlfriend, who was a passenger in the car, sustained non-life-threatening injuries

President Joe Biden on Monday addressed the fatal police shooting of Daunte Wright and called for calm in the wake of violent protests.

Biden says he watched the 'fairly graphic' body camera footage from the officer who killed Wright.

'The question is whether it was an accident or intentional? That remains to be determined,' he said.

Biden said there is 'absolutely no justification for violence' regarding protests.

'Peaceful protest is understandable. And the fact is that we do know that the anger, pain and trauma that exists in Black community in that environment is real, serious, and consequential. But that does not justify violence...

'We should listen to Dante's mom who is calling for peace and calm.'

When asked if he expects the country is on a 'razor's edge' Biden says he is 'not going to speculate now. I hopeful that there will be an outcome that will be supported by a vast majority of people in the region and that is my expectation.'

'This was an accidental discharge that resulted in a tragic death of Mr Wright,' Gannon said.

'As I watch the video and listen to the officer's commands, it is my belief that the officer had the intention to deploy their taser, but instead shot Mr Wright with a single bullet.

'For informational purposes we train with our handguns on our dominant side, and our taser on our weak side. If you're right-handed you carry your firearm on your right side and your carry your taser on the left. This is done purposefully, and it's trained.'

The Minnesota Bureau of Criminal Apprehension is the agency investigating Wright's death.

She has been placed on administrative duty.

Brooklyn Park Mayor Mike Elliott said during the press conference that the officer should be fired.

'My position is that we cannot afford to make mistakes that lead to the loss of life of other people in our profession,' Elliott said, adding he fully supported relieving the officer of her duties.

Elliot noted that the incident coincided with the Chauvin trial, which had forced a reckoning over the death of Floyd.

'I want to say that our hearts are aching right now,' Elliott said. 'We are in pain right now. And we recognize that this couldn't have happened at a worse time.'

It is not yet clear if the officer will face charges.

The press conference, which was attended by journalists and community activists, became heated at times when some accused authorities of working hard to protect a 'killer cop than a victim of police murder'.

Ben Crump, a civil rights attorney who helped win a $27 million legal settlement for the Floyd family, said he is also representing the Wrights. 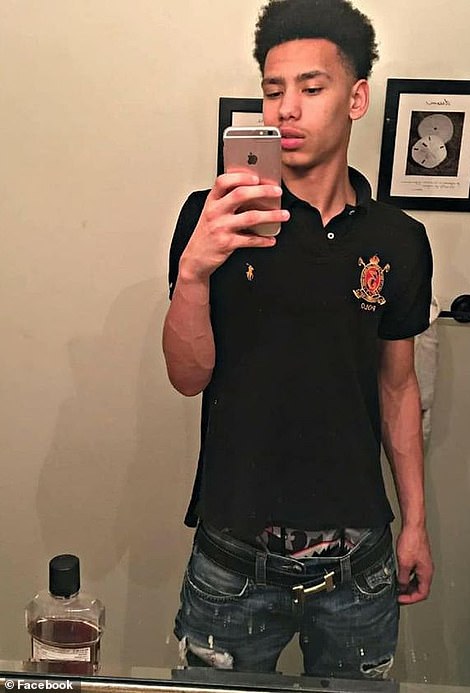 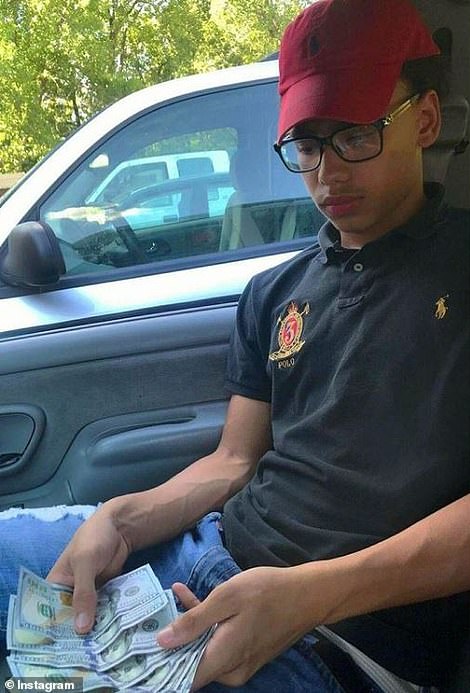 Wright's mother Katie claimed her son, pictured, had called her while being pulled over to get insurance information for the vehicle having recently been given the car as a gift. She suggested her son was pulled over for having an air freshener hanging from rear view mirror 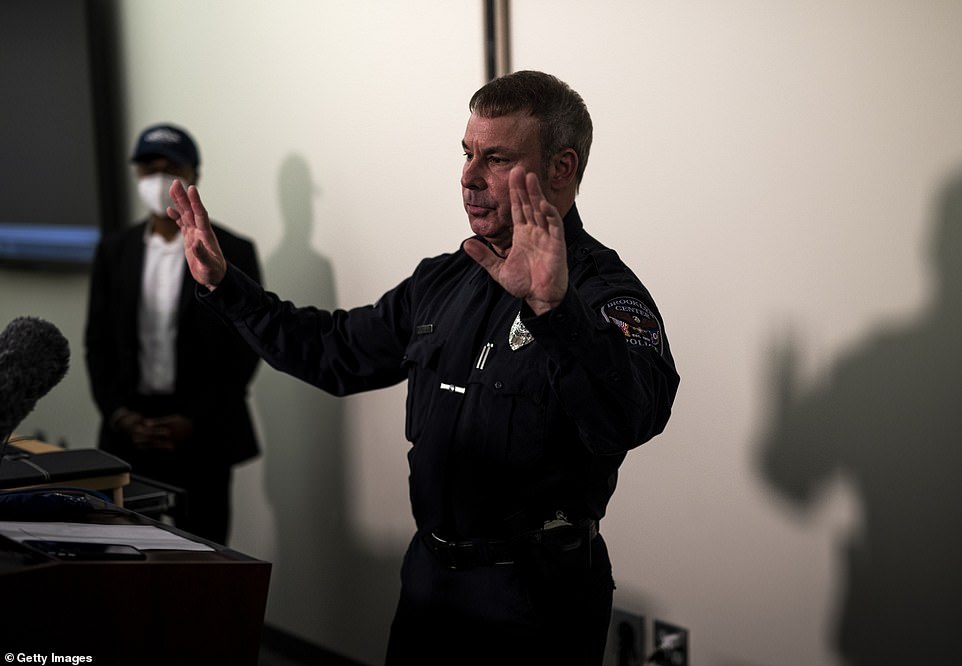 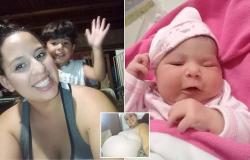 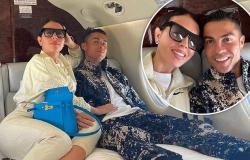 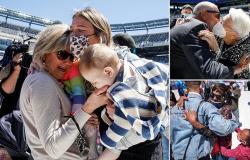 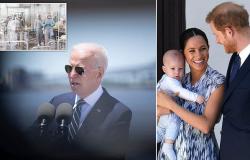