Apr. 30—Westmoreland County detectives and state troopers used a tip from an informant to intercept a tennis ball-size package of raw heroin Thursday as it was delivered to Hempfield from Michigan, according to court documents.

Three residents from Eastpoint, Mich. — Percy Harper, 33, Jessica R. Walilko and Carlos E. Wade, 33 — were arrested on charges of possession, manufacturing and delivery of a controlled substance filed by county detectives after the 9 p.m. operation in the parking lot of the Red Roof Inn Motel off Route 30.

Eastpoint is just outside of Detroit.

Detective Ray Dupilka said in court documents that an informant approached investigators Thursday afternoon saying they were in contact with a man from the Detroit area who in recent weeks "was delivering quantities of raw heroin" to the area.

According to Dupilka, the witness said the contact, later identified as Harper, would provide participants in the delivery with a cellphone that was used to communicate during interstate drug delivery.

According to court documents, the witness reported a delivery was to occur Thursday night in the parking lot of the motel. Dupilka said troopers with the Troop A Community Enforcement Team were called to assist.

Dupilka reported a white sport utility vehicle with Michigan plates pulled into the parking lot and the informant was able to identify it as the alleged traffickers. As Harper was dropped off and entered the motel, he was stopped and questioned by troopers.

Court documents said Wade was operating the vehicle owned by Walilko, and both were questioned as they remained in the SUV.

"During an interview, Walilko disclosed that she was concealing a quantity of suspected heroin in the crotch of her (pants). Walilko said Harper provided her the suspected heroin prior to his exiting the vehicle and directed her 'to hold this for me,' " Dupilka wrote in court documents.

Dupilka said, in addition to the package of heroin Walilko turned over to investigators, police seized multiple cellphones from the trio.

Dupilka estimated the street value of the contraband at several thousand dollars.

A joint 2018 investigative report to law enforcement agencies, "The Opioid Threat in Pennsylvania," prepared by the U.S. Drug Enforcement Administration field office in Philadelphia and the University of Pittsburgh, identified Michigan, along with New Jersey, New York and Ohio, among primary source points of illegal opioids being delivered into the state.

Harper, Walilko and Wade were ordered held in the county prison after failing to post $20,000 bond pending a preliminary hearing May 11.

PREV Indian industry body calls for economic slow-down to save lives mogaznewsen
NEXT Pakistani sailor who jumped off a livestock ship and snuck into Australia hands ... 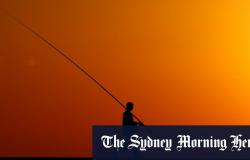