A frantic last push is under way today on the eve of 'Super Thursday' - with Keir Starmer admitting he fears a 'vaccine bounce' for the Tories.

The Labour leader is facing the threat of a hard-Left coup with polls suggesting the party is on track for disaster in the crucial elections tomorrow.

One survey showed the Conservatives set for a stunning 17-point victory in the Hartlepool by-election, continuing Boris Johnson's demolition of the 'Red Wall'.

Labour's own canvassing data shows only 40 per cent of the party's previous supporters in Hartlepool have pledged to back it tomorrow, according to the Guardian. The figures come from 10,000 doors knocked during the campaign.

It would be only the second time in 38 years that a ruling party has snatched a seat from the Opposition in a by-election.

Meanwhile, other polls have indicated that Andy Street and Ben Houchen, the Tory mayors in former Labour strongholds of the West Midlands and Tees Valley, are on course to score victories. 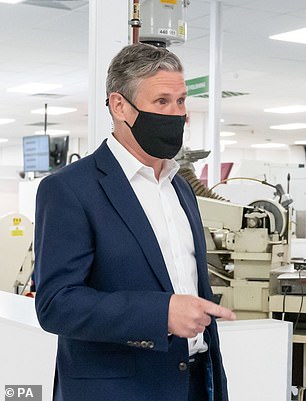 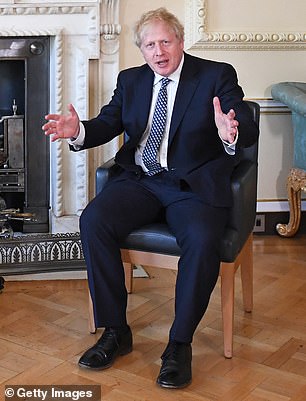 Corbynites in Sir Keir's party already appear to be sharpening their knives, with warnings that the leader will have to 'consider his position'.

On a visit to Lancashire yesterday, Sir Keir desperately played down expectations, saying: 'We are sailing into very strong headwinds. Because there is undoubtedly a strong vaccine bounce.'

Mr Johnson is expected to make a final pitch to the electorate in the West Midlands today, while Sir Keir will tour the country as he campaigns for votes.

With the coronavirus pandemic delaying a host of elections by 12 months, it means there will be two years' worth of polls taking place across Great Britain on a single day on Thursday.

Voters will have their say on the make-up of English councils, the Scottish Parliament, the Welsh Senedd and decide who holds power in city halls, with a number of areas choosing regional mayors.

As part of Thursday's slew of polls, Hartlepool will also elect a new MP as Labour looks to keep a seat that has been red since its inception in the 1970s. 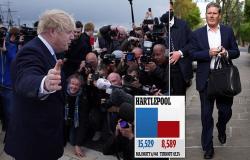