Architect's concept that Stonehenge rocks were base for Neolithic temple ... 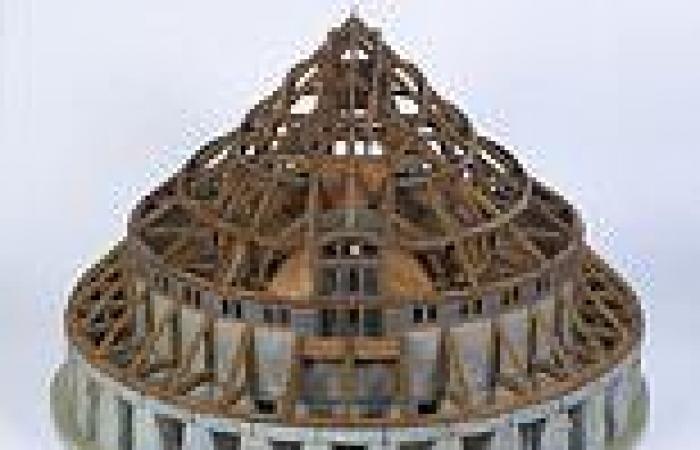 One of the biggest mysteries surrounding Stonehenge is how any of it is still standing, given the predations of souvenir-hunters and vandals including the great 17th-century architect Sir Christopher Wren.

He paid many visits to the ancient monument on Salisbury Plain and his surname can still be seen carved on one of its stones.

The Victorians were even more destructive, renting chisels to visitors so they could take great chunks of Stonehenge home, and over the centuries farmers purloined stones for building their barns.

Perhaps they might all have had more respect for the monument, now a Unesco World Heritage site, had they heard the extraordinary theory being put forward in a new book by 62-year-old landscape architect Sarah Ewbank.

She would have us believe that the Stonehenge we see today represents the ruins of a majestic building which once had a spectacular thatched roof. 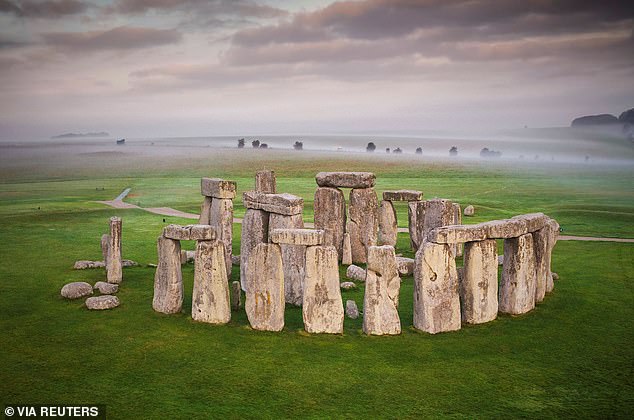 As mind-boggling as contemplating an upright Tower of Pisa or a Day-Glo Taj Mahal, this may seem as barking as other ideas expounded about Stonehenge over the centuries: that its layout was based on the female private parts, or that it was a site of human sacrifice or a landing pad for aliens.

But Sarah is deadly serious, and she backs up her arguments with the rather ferocious electric saw she keeps in the garage of her pretty Cotswolds cottage near Lechlade, Gloucestershire.

The feisty grandmother does not use this to intimidate those who disagree with her — although she is rather frustrated with the academics who have repeatedly refused to engage with her idea that Stonehenge was a Neolithic version of the Royal Albert Hall.

No, the saw is used to fashion ever-more detailed models of how she thinks Stonehenge might have looked. Each has taken about two months to complete and they have got bigger each time.

While three earlier models have been banished to the attic, version four is currently taking pride of place in the dining room. 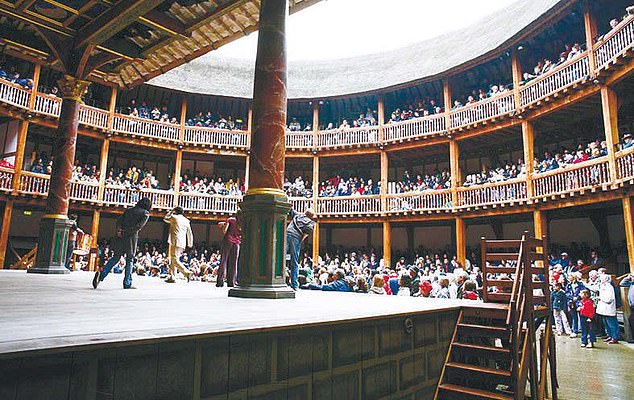 Sarah points out that Stonehenge has a total diameter — some 30 metres — which is almost exactly the same as Shakespeare’s Globe (pictured), a very similarly thatched building

Built on a scale of 1:33, it is surprisingly persuasive. The moment you see the familiar stone slabs as the supports for an upper storey you think ‘Ah, yes, of course it was a building. What else could it have been?’

As to what kind of building, Sarah thinks it was an all-purpose Neolithic temple with a large oval hall overlooked by galleries in which crowds might have gathered to hear speakers below.

She points out that the total diameter — some 30 metres — is almost exactly the same as Shakespeare’s Globe, a similarly thatched building in which, several millennia later, the human voice could carry to every audience member.

‘It is unquestionably the right size for an enclosed public venue,’ she says, speculating that the scenes at Stonehenge might have been as boisterous as in Elizabethan times.

‘Maybe there was feasting in the galleries, with dancing and musicians playing below, or perhaps ceremonies took place to welcome in the solstices. It all sounds rather splendid.’

It does indeed, and Sarah contends that archaeologists have under-estimated our Neolithic and Bronze Age forebears who built Stonehenge over centuries, years starting around 5,000 BC. 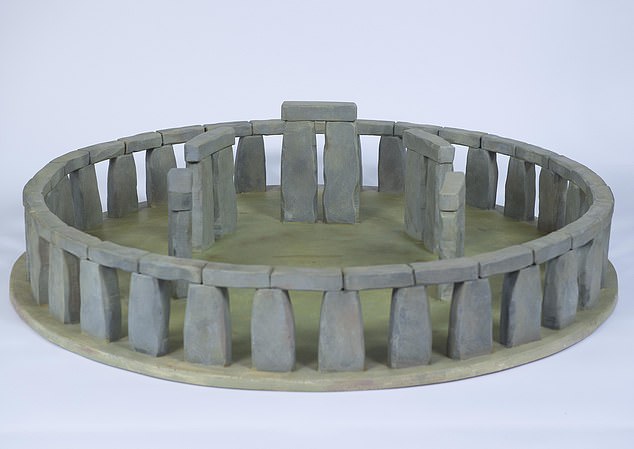 Building blocks: the basic structure which can be deduced from what is left to this day 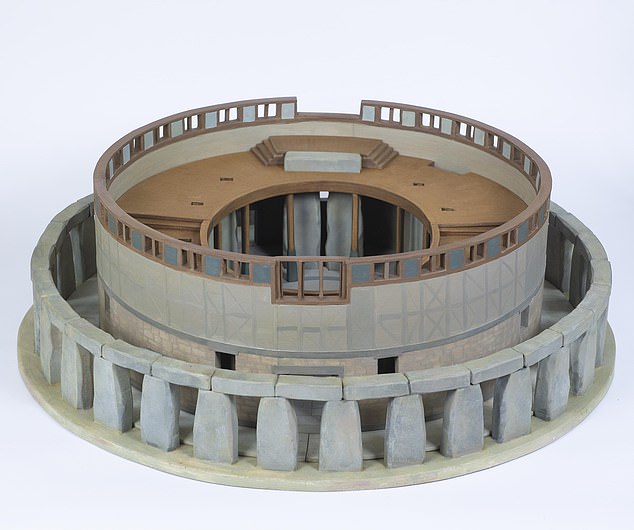 Layers upon layers: architect Sarah Ewbank's theory has an inner wall and doorway 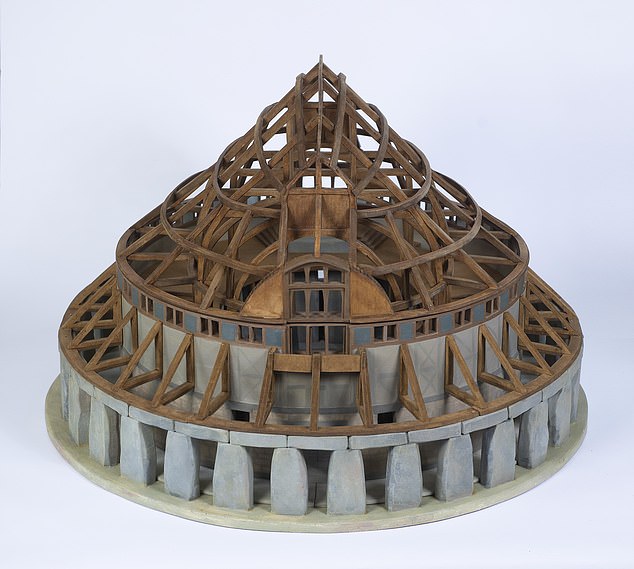 A giant roof: Sarah believes the monument took the shape of an all purpose Neolithic temple

‘They have assumed they were rough, tough, types who had advanced little from grunting cavemen and were hardy enough to worship outdoors.

But we know that the Bronze Age was sophisticated enough to have goldsmiths making absolutely stunning jewellery and they knew how to make copper alloys like bronze.

‘It seems obvious to me that they would have wanted to mark the winter solstice inside, under a roof, not outside in the freezing cold.’

It has taken five years for Sarah to develop her theory with the support of Crispin Scott, a 65-year-old retired Army officer who is her partner of 14 years.

They are both divorced, with five grown-up children between them, and Sarah has fitted in her research around her work and their shared hobby of bell-ringing.

‘Initially, Cris couldn’t understand why I was doing it. But as I got more into it, he realised that I was on to something,’ she says. 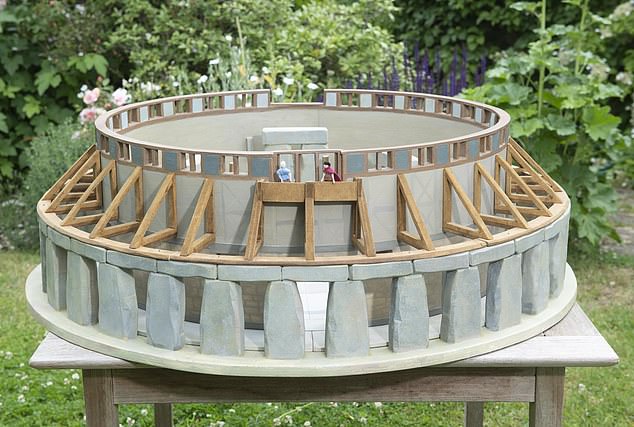 It has taken five years for Sarah to develop her theory with the support of Crispin Scott, a 65-year-old retired Army officer who is her partner of 14 years. Pictured: One of Sarah's model 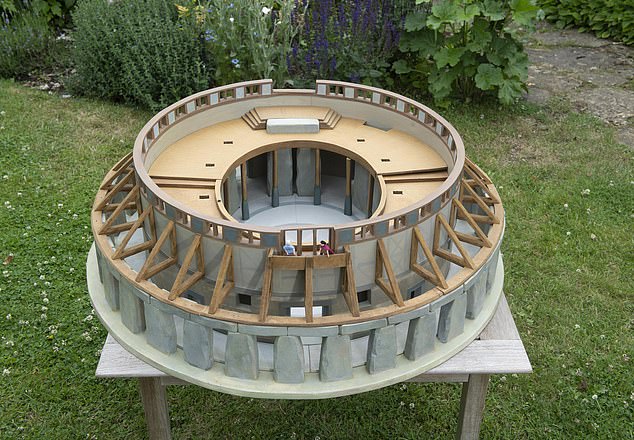 Sarah has been in architecture for more than 40 years and has been involved in consultancy and planning for everything from historic estates to Oxford colleges. Pictured: Sarah's model 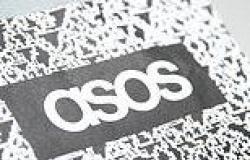 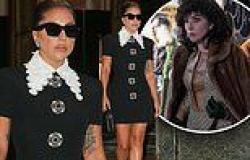 “Father, Son, House of Gucci:” Every Epic Fashion Moment From The House of ... fashion 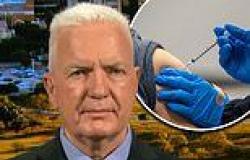 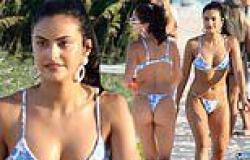