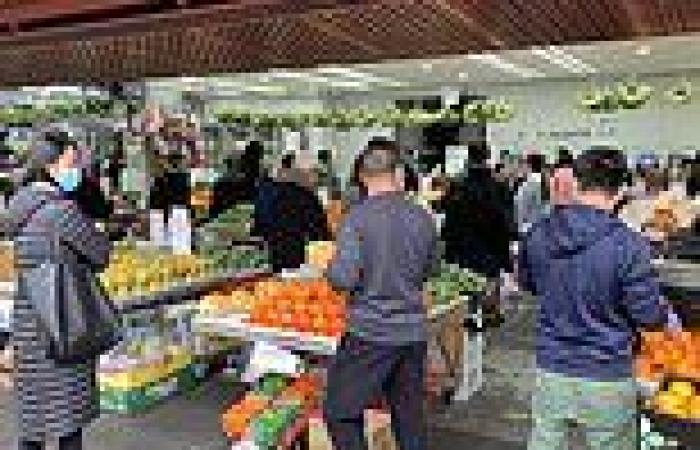 With a trail of contagion seeping across Sydney's south-west and a mammoth five-page-long list of Covid exposure sites revealed on Monday night, chances the city will be released from lockdown on Friday are looking ever more bleak.

Ethnically-diverse suburbs in the south-west, where the 'vast majority' of new cases are, are home to a younger demographic, one more likely to mingle and less likely to have jobs where they can work from home.

Tradies, labourers and taxi drivers are also among the top five most popular jobs in Fairfield, the outbreak's new epicentre, which makes them more likely to travel for work and take the virus with them - putting health officials on a war footing.

Among the bumper list of 21 new venues, mostly centered in the coronavirus-ravaged south-western suburbs, are two Woolworths, a Coles, a Big W and Kmart.

This is alongside 12 bus routes and 17 trains, with Gladys Berejiklian begging every Sydneysider who can to work from home, or to be 100 per cent sure they are virus-free before leaving the house. 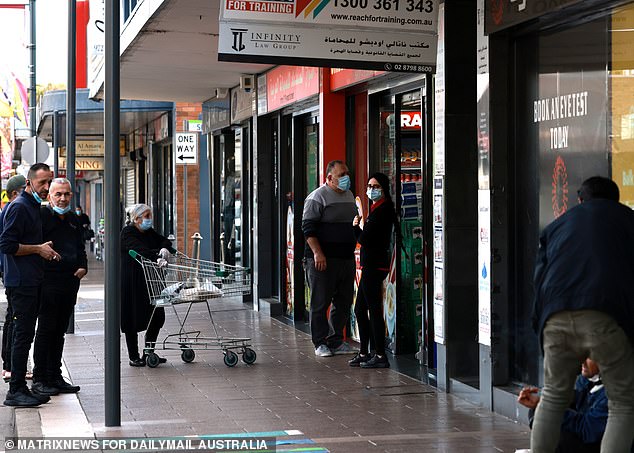 Ethnically-diverse suburbs in the south-west, where the 'vast majority' of new cases are, is home to a typically younger demographic, one more likely to mingle and less likely to have jobs where they can work from home (pictured, locals in Fairfield on Monday) 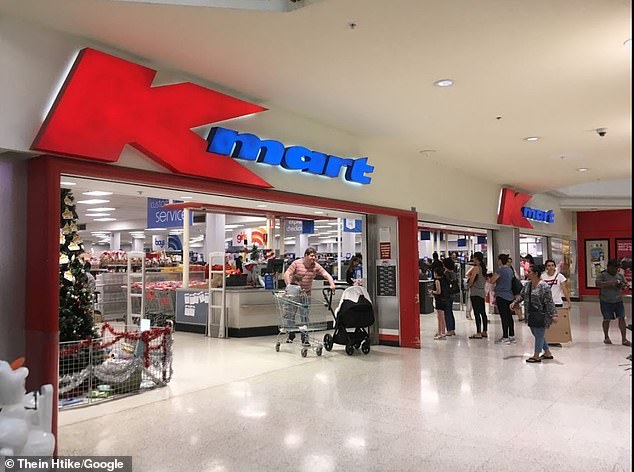 Among the bumper list of 21 new venues, mostly centered in the coronavirus-ravaged south-western suburbs, are two Woolworths, a Coles, a Big W and Kmart (pictured, the affected store in Bansktown)

A concerned Ms Berejiklian revealed the 'vast majority' of the 112 new community transmission in figures announced on Monday had occurred in the Fairfield local government area, 30km from the city's centre.

Nine suburbs that make up the Fairfield Local Government Area - Fairfield, Smithfield, Bossley Park, Fairfield West, Wakeley, Bonnyrigg, Glenfield and West Hoxton - are at now at the heart of the outbreak.

A closer look at the demographics shows Fairfield has a slightly lower median age of 36, compared with 38 in the rest of Australia. 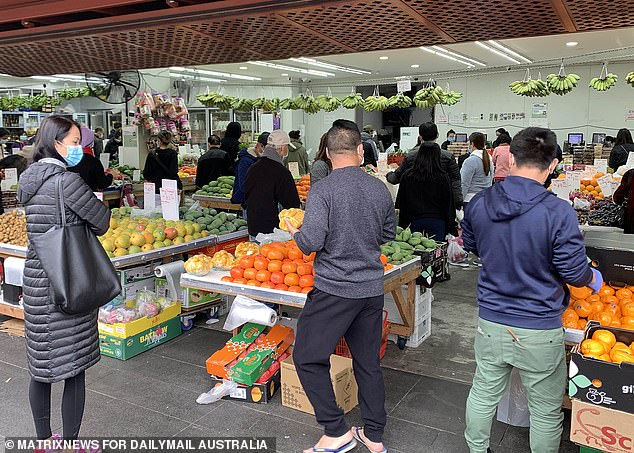 Those in Fairfield are also more likely to live with more people, have more children and are less likely to have office jobs.

Demographer Mark McCrindle said this also meant they were more likely to travel across Sydney for work.

'Your mobility out and about in the community is what you get a lot more of,' he told Daily Mail Australia.

Chief Health Officer Dr Kerry Chant's call for people to only shop for groceries once a week was a big ask for people who didn't have money in the bank and more mouths to feed.

'Lower earnings and lower wealth, people don't have the ongoing money to stockpile the food or to get by for a few weeks of a lockdown,' Mr McCrindle said. 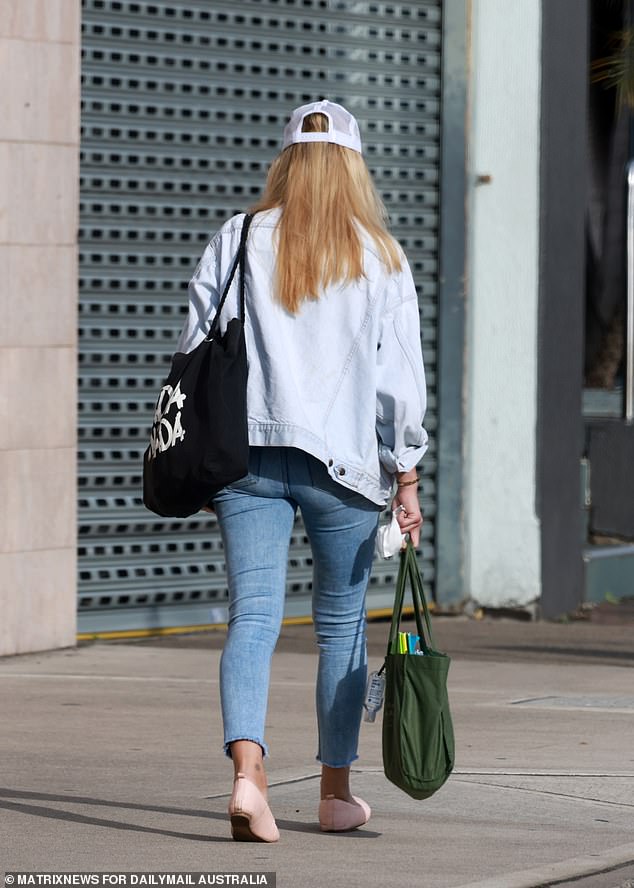 Machinery operators and drivers: 12.2 per cent

'It's very much the culturally-diverse supermarket and so people are just going in every day or so and buying what they need - it's a different approach to grocery shopping that we find with a lot of these migrant communities.

'These areas are not the leafy suburbs that might be well-heeled to do the once-a-week trolley shop.'

In Fairfield, less than 25 per cent of people speak English-only at home, which means three-quarters of residents have English at least as a second language.

Vietnamese is the most spoken language with 20.4 per cent, followed by Arabic on 7.9 per cent.

This has made community leaders more important to communicate health messaging to a multicultural population.

'That's where a lot of people look to for their advice.'

Mr McCrindle said that meant fewer residents would have heard official Covid messages from the government through popular media. 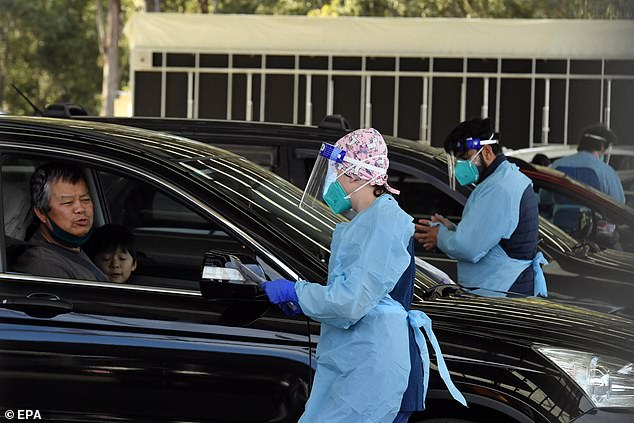 Tradies, labourers and taxi drivers are also among the top five list for work, which makes working from home much less likely (pictured, a Covid testing site at Fairfield Showgrounds)

'The risk is everywhere in those areas,' she said. 'We have to be upfront with where the virus is circulating at the moment.'

There are parallels with Melbourne where the virus last year circulated among multicultural communities in the city's north-west with a higher proportion of people in service jobs who couldn't work from home.

The Victorian capital was locked down for 112 days from early August until late October.

Unfortunately for the Covid-weary city, Sydney's outbreak has already moved across state lines after an infected family and a group of removalists got exemptions to travel interstate.

The Ariele Apartments in Maribyrnong, 8km north-west of the Victorian state capital, has been put into lockdown after the infected removalists visited on July 8.

The complex has since been listed as a Tier 1 exposure site, which means anyone at the apartments from 1pm to 11.59pm on that day must get tested and isolate for 14 days, regardless of the results.

Anyone who's even been to the block at any time between July 9 and 12 must also get tested and isolate until they test negative.

A Mobil service station, a McDonald's, a shopping centre, a Metro petrol station and a Coles are also on alert after the virus-infected family travelled from Sydney. 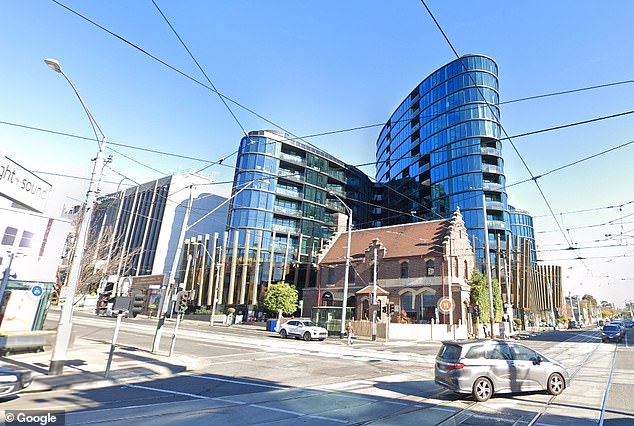 Residents of the Ariele Apartments in Maribyrnong (pictured), 8km north-west of the Victorian state capital, have been ordered not to leave the building after the infected group visited on July 8

Tier 1: Get tested immediately and quarantine for 14 days from exposure

Tier 2: Get tested urgently and isolate until you have a negative result 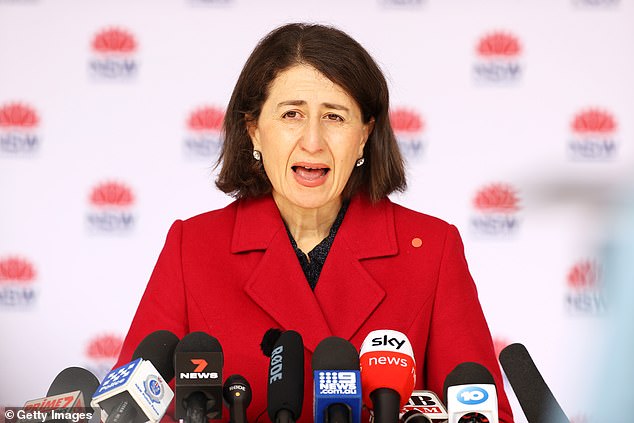 NEW: USE DAILY MAIL AUSTRALIA'S TRACKER TO FIND THE LATEST EXPOSURE SITES NEAR YOU

University of New South Wales Adjunct Professor Bill Bowtell, who spearheaded Australia's 1980s fight against HIV and AIDS, said Sydney would have to adopt a stricter, Stage Four lockdown like Melbourne did under Victoria's Labor government.

'The longer we don't move to Stage Four lockdowns, the longer it will take to come out of it.'

Residents in nine suburbs have been warned they hold the key to getting the city out of Covid-19 lockdown as authorities pile pressure on Sydney's west to follow strict stay-at-home orders.

Ms Berejiklian on Monday said she needed to 'call out' the Fairfield local government area - where health officials found the vast majority of the 112 local coronavirus cases recorded overnight.