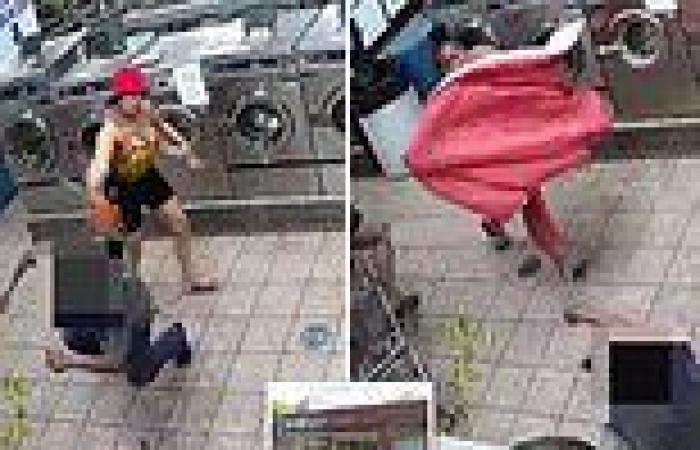 Two women were caught on video beating up a Brooklyn laundromat attendant and breaking a flower pot over his head as New York City's violent summer rages on.

The incident occurred on June 8 at around 4am at the Aqua Wash Laundromat on 98th Street, the NYPD said in a news release seeking information about the suspects.

Video shows the 69-year-old attendant trying to run away from the duo as one of the assailants wearing a yellow and orange tank top hits him with the pot, knocking him down.

Another woman, wearing a pink sundress then throws a blank on top of him as the two make their escape.

The second woman can be seen stopping briefly to pick up what appeared to be a knife that had fallen out of her bag.

The attack came as violence continues unabated in the city with a six percent spike in assaults compared with last year, according to the latest NYPD crime statistics. So far this year 11,033 have been reported citywide, compared to 10,407 in the same period in 2020. 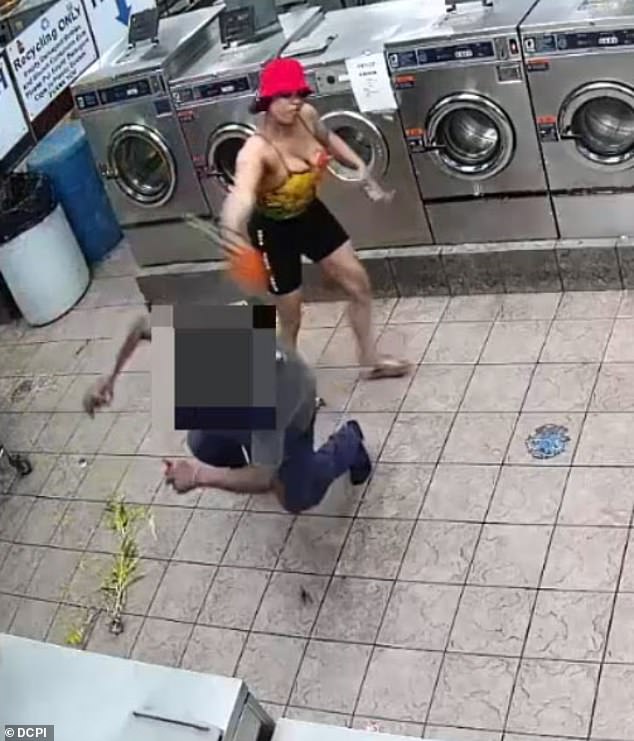 Two women were recorded on video assaulting a Brooklyn laundromat attendant with one breaking a flowerpot over his head, knocking him down 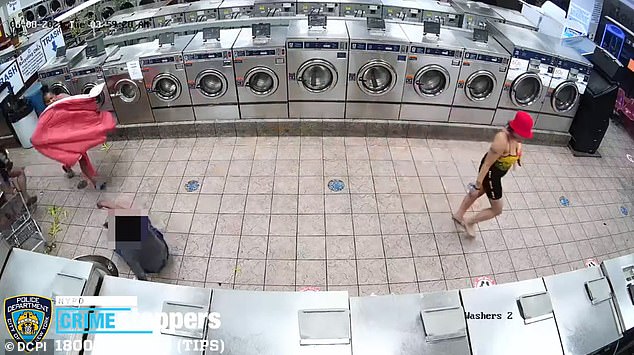 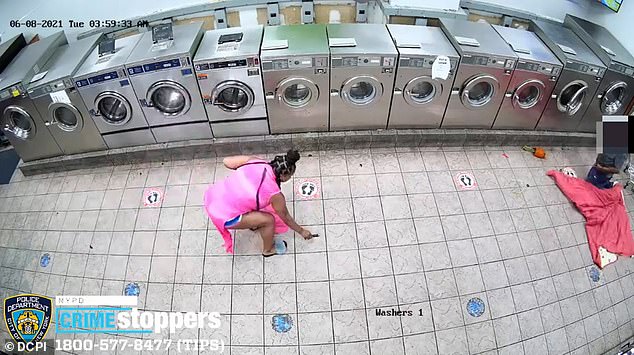 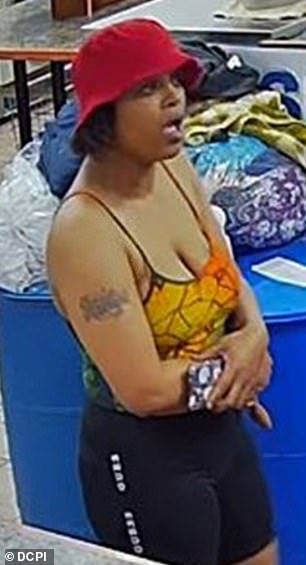 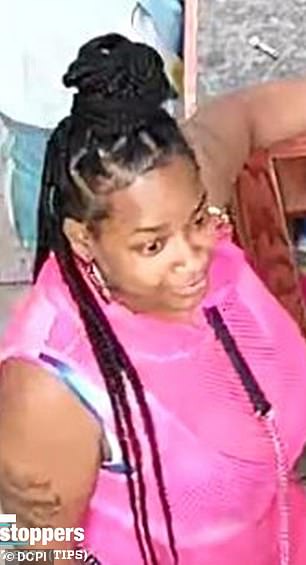 Police are seeking any information that could lead to the assailants' arrest. One was seen breaking a flower pot over the victim's head (left). The other can be seen throwing a blanket on the victim before bending down to pick up what appeared to be a knife she dropped on the floor 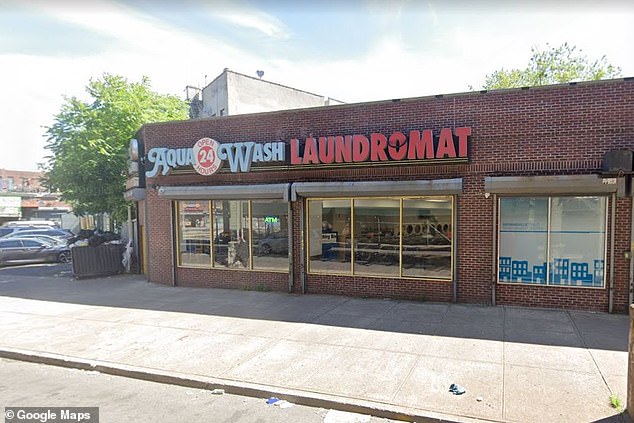 The two women had reportedly gotten into an argument with the attendant, but police were unable to confirm what started the fight.

Police said the victim was taken to Brookdale Hospital where he was in stable condition, and police are seeking information to find the assailants.

New York City's anti-crime mayoral nominee Eric Adams warned on Wednesday that 'no one is going to come back' if violence, and in particular gun violence in the Big Apple continues.

Adams, the Brooklyn borough president who won the Democratic primary for this year's mayoral race, appeared at an event with Andrew Cuomo on Wednesday as the two political leaders presented a united front in addressing the rising crime. 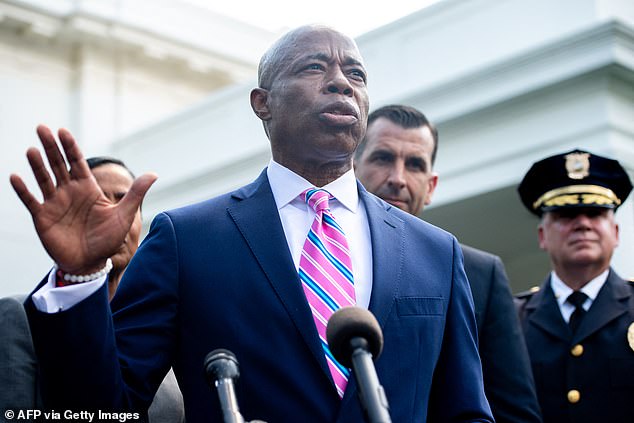 'No one is going to come back to our multibillion-dollar tourism industry if 3-year-olds are being shot in Times Square,' Adams said.

Adams, 60, ran on a largely anti-crime platform and will become the mayor of New York if he defeats Republican Curtis Sliwa in the general election. The former NYPD police captain has even received praised from Fox News host Tucker Carlson.

Cuomo added to the praise on Wednesday while speaking at the Lenox Road Baptist Church - a stark contrast to his ongoing rivalry with current Mayor Bill de Blasio.

'Eric and I come from the same political philosophy,' Cuomo said, according to the New York Daily News.

'I think Eric Adams and I are going to work very well together. I believe, he believes, the same philosophy of government: it's not what you say, it's not about the politics, it's about performance.'

The politicians both said their main focuses for New York City will be public safety and economic recovery after the COVID-19 pandemic.

Adams compared New York City's Washington Square Park to a San Francisco 'shantytown' after residents nearby have complained of drug use and loud raves after the park has closed.

'My son and I walk through the park oftentimes just to talk. Someone's sitting next to us, injecting themselves with heroin. Police [are] right there,' Adams said. 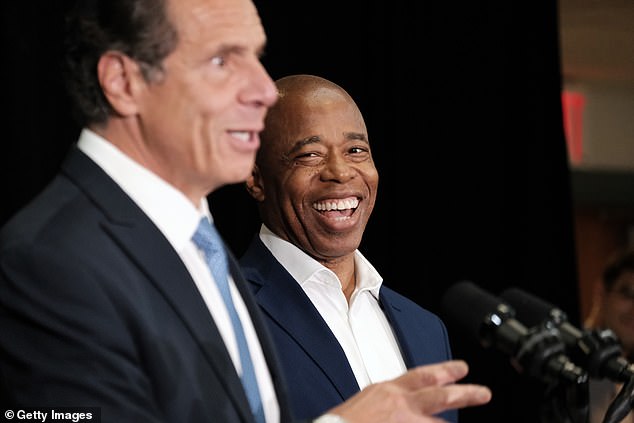 Adams, who won the Democratic primary for this year's mayoral race, appeared at an event with Andrew Cuomo as the two presented a united front in addressing rising crime

'There is just a sense that we have a city where any and everything goes.'

The mayoral candidate also ripped New York judges and bail reform laws for not doing their part to combat the rising crime rates.

He also said judges are not using tools they do have at their disposal like Kendra's Law which lets courts order mental health treatment in some cases.

'Our judges are not giving bail on cases where they are allowed to give bail. They're refusing to use Kendra's Law on mental health issues,' Adams said.

'We have thrown up our hands, and we have surrendered our city. It's time for us to ensure our city is for the working class, everyday people who are following the laws and saying that government is going to make sure we protect them.' 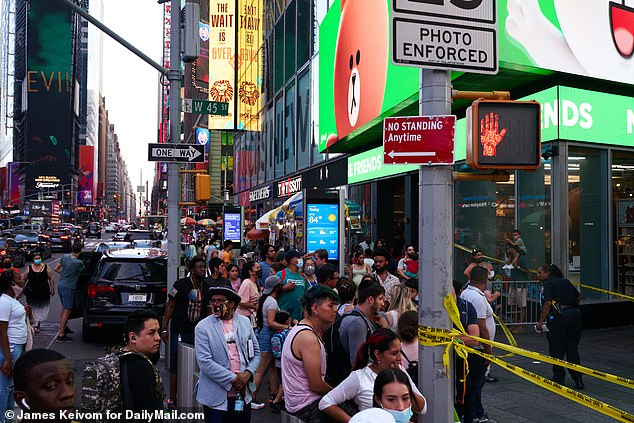 The shooting on Wednesday was the third shooting in New York City since May. Bystanders are pictured in Times Square after a shooting on June 27 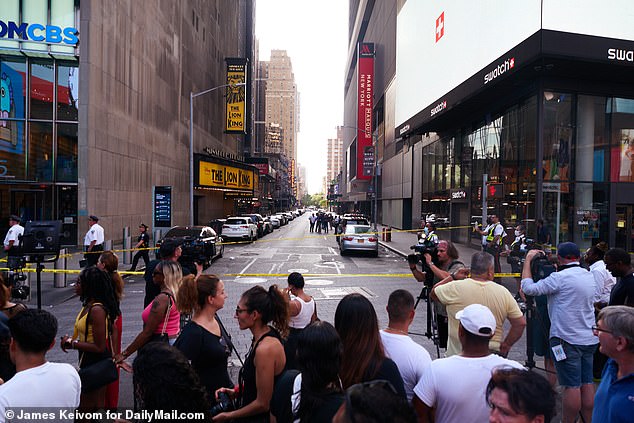 Then, a U.S. Marine was injured in another shooting on June 27 when he was hit by a ricocheting bullet at W. 45th St. and Seventh Ave.

Cuomo, 63, described gun violence as a 'major civil rights issue' while announcing the state will offer 4,000 summer jobs and full-time jobs with training 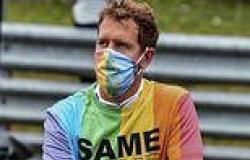 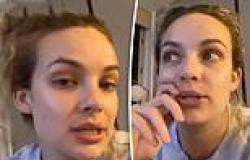 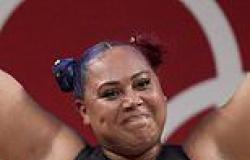 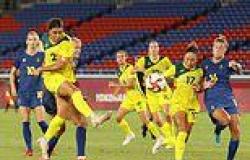 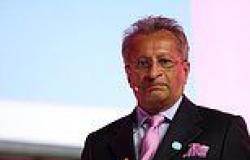