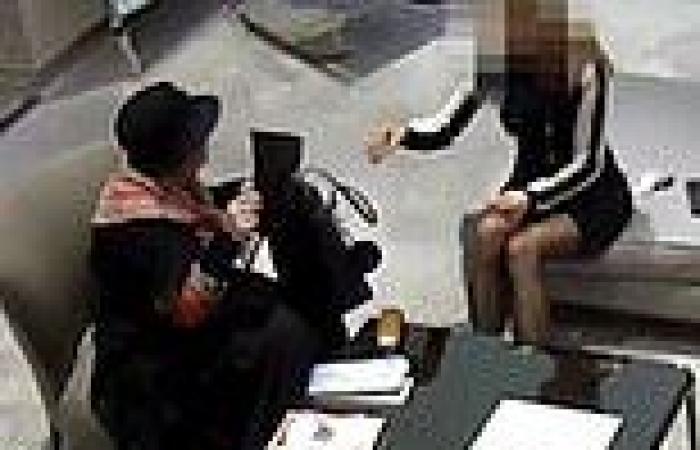 Scotland Yard believe the thieves behind a heist that saw £4.2m diamonds swapped for pebbles have links to suspected Russian gangsters and are potentially seasoned criminals.

Lulu Lakatos, 60, had posed as a gemmologist called 'Anna' to arrange an inspection of the seven diamond-studded rings with Boodles boss Nicholas Wainwright - supposedly to value them for wealthy Russian clients.

While Lakatos was jailed for five-and-a-half years earlier this week, the two female associates also believed to have been involved in the grab, as well as the £4.2m diamonds, remain missing.

Today, the chief investigating officer says he believes Lakatos and her fellow international thieves have worked on heists at least once before, and have links with suspected Russian gangsters.

Acting Detective Sergeant William Man, the individual heading up the chase for the two get-away women who remain undiscovered after the heist, says police have intel on at least one previous job the gang had undertaken.

He told the Times of another heist in Europe: 'We know one previous job has been confirmed. A case is being built at the moment.

'From the one they were brazen enough to do here you wouldn't think it was a one-off. We think there's a bigger picture, potentially a link to Russians.' 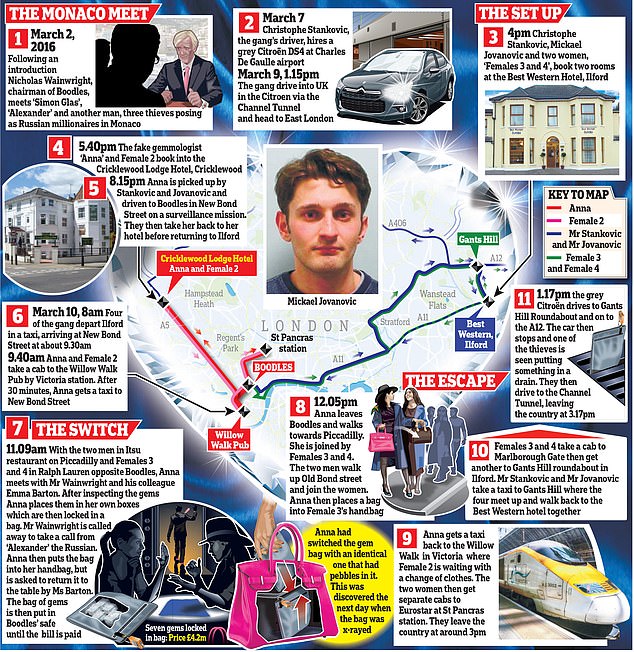 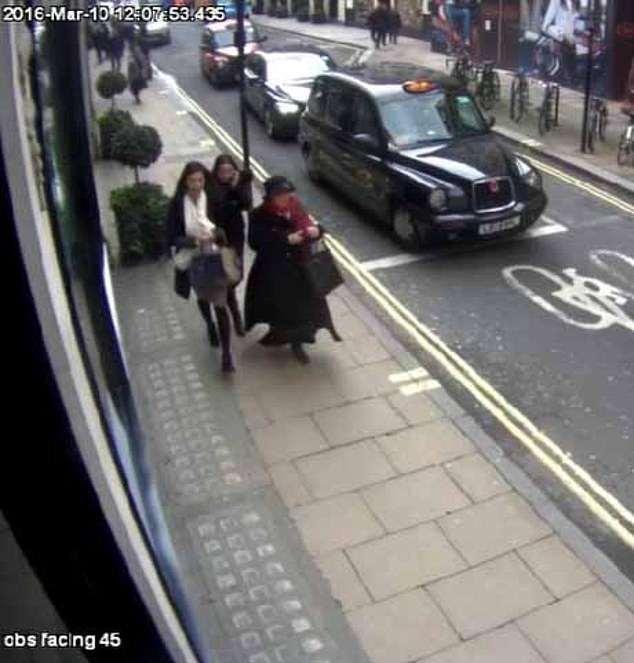 Lulu Lakatos, 60, (right) was jailed for more than five years, but her two female accomplices (pictured left) and the £4.2m diamonds have not yet been found 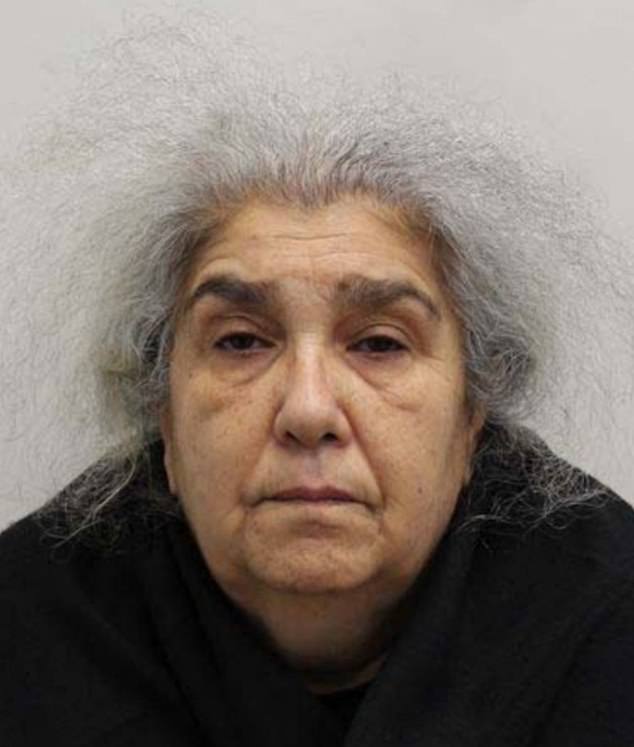 After being caught, Lakatos (pictured in a mugshot) claimed Anna was her younger sister, Liliana, who had confessed to using Lulu's passport to commit the crime months before she died in a car crash, aged 49, in Romania in October 2019

CCTV footage shows the moment Lakatos swiped £4.2million worth of gems under the noses of staff at London society jeweller Boodles - as she was jailed for five-and-a-half years for the Ocean's Eleven-style heist.

At the crucial moment, she arranged for a telephone call to take Mr Wainwright away and put a padlocked purse containing the diamonds into her handbag in front of another employee, as shown on the store's CCTV.

Diamond expert Emma Barton immediately challenged her, at which point the Romanian pulled off an astonishing sleight of hand, swapping the jewel-laden purse with a precise replica weighed down with pebbles.

Ms Barton raised suspicions but the gems - believed to have been concealed in a hidden compartment - were not found in the Lakatos' handbag, as she used the pretence of poor English to suggest a misunderstanding.

She left the Bond Street store where four accomplices were waiting outside before putting the gems into the handbag of an unknown woman. She and the international gang of grifters fled the UK for France in less than three hours.

When the purse in Boodles' safe was opened the following day, inside were seven small garden pebbles, and the real diamonds have never been recovered.

After being caught, Lakatos claimed Anna was her younger sister, Liliana, who had confessed to using Lulu's passport to commit the crime months before she died in a car crash, aged 49, in Romania in October 2019.

Prosecutor Oliver Mosley said: 'This was a conspiracy of the highest sophistication. It is believed to be the highest value individual theft offence of this kind ever committed in this country.'

Police believe the heist involved six accomplices, two of whom – Christophe Stankovic and Mikhael Jovanovic – are already behind bars, having been convicted last year.

'Anna' left the store shortly after noon and was met by Stankovic and Jovanovic's two female accomplices. CCTV footage shows her dropping the diamonds into one of their handbags before returning to the Willow Walk pub.

She and the accomplice then travelled to King's Cross and caught a Eurostar train to Paris.

Meanwhile, Stankovic and Jovanovic and the two women hailed separate taxis and asked to be taken to the Gants Hill roundabout in east London.

It would have been the perfect crime, but for painstaking work by Scotland Yard's Flying Squad who traced Stankovic through the hire car's number plate and Jovanovic via his Eurostar tickets. It's unclear what led them to Lakatos.

Detective Man, of Flying Squad, refused to confirm where the gang's previous heist had occurred, or what was stolen. 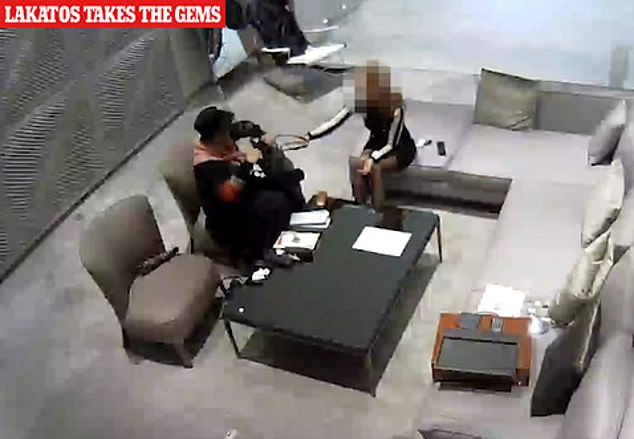 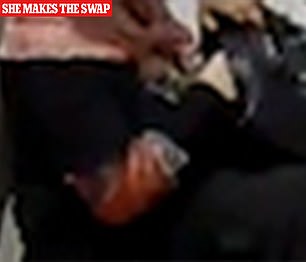 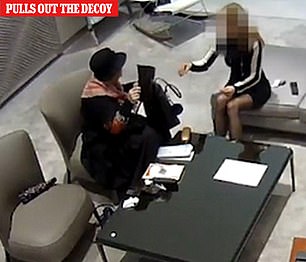 Diamond expert Emma Barton immediately challenged her, at which point the Romanian pulled off an astonishing sleight of hand, swapping the jewel-laden purse with a precise replica weighed down with pebbles

Lakatos sobbed in the dock after she was found guilty of conspiracy to steal on or before March 10 2016 by a jury at Southwark Crown Court by a majority of 10 to one after nine hours and 19 minutes of deliberations. 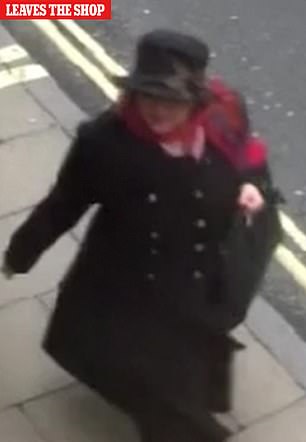 'You have been convicted of conspiring to 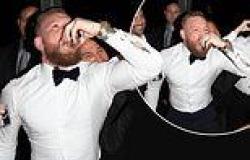 Conor McGregor knocks back shots in a tux at party in West Hollywood amid ... 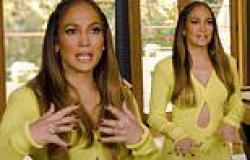 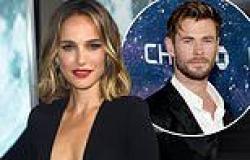 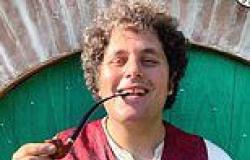 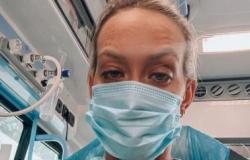 Elsa Hosk snuggles up to her boyfriend Tom Daly during relaxing stroll with ...

Sophie Turner and Joe Jonas coordinate in baseball caps as they take a sunny ...

Four people are found dead in house in Derbyshire 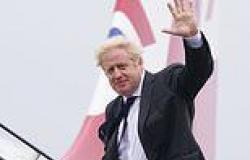