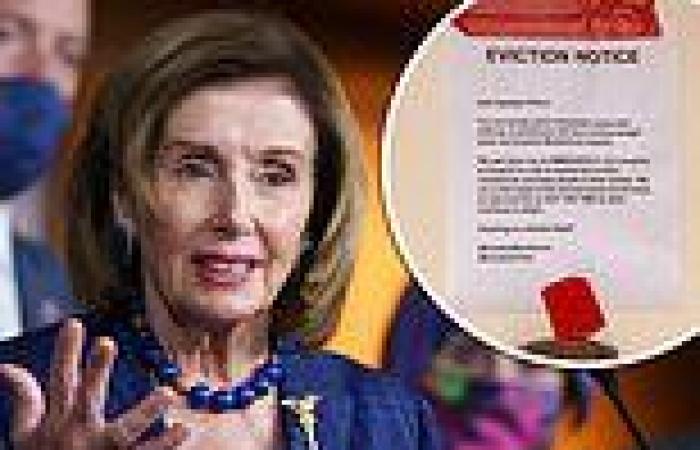 A group of about 40 housing and homeless advocates marched to House Speaker Nancy Pelosi's San Francisco mansion on Saturday to hang an 'eviction notice' on her door, demanding she reconvene Congress to pass legislation extending the eviction moratorium.

The moratorium expired at midnight on Saturday, and the House Speaker was unable to garner enough support to pass a resolution extending it before Congress adjourned for summer break.

She has instead demanded that the Centers for Disease Control, which initially started the moratorium extend it, despite a Supreme Court ruling requiring Congressional authorization.

'Dear Speaker Pelosi, you are hereby given notice that millions of Americans will face eviction tonight when the eviction moratorium expires,' the 'eviction notice' read.

'We call upon you to immediately call Congress to session to vote to extend the eviction moratorium and keep people in their homes. We're in the midst of the second-worse COVID surge to date, and this is not the time to allow evictions to begin.'

'Housing is a human right,' the letter concluded. 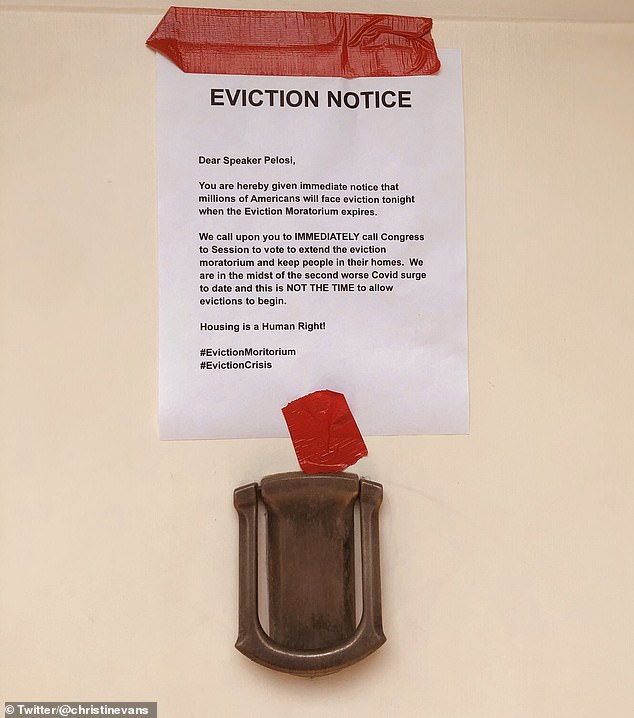 The protesters hung an 'eviction notice' on the speaker's front door 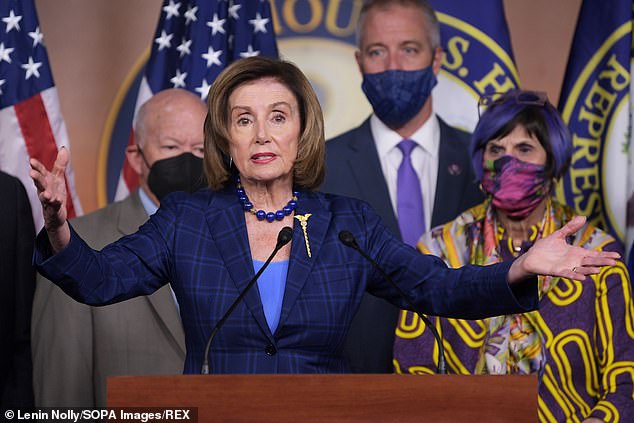 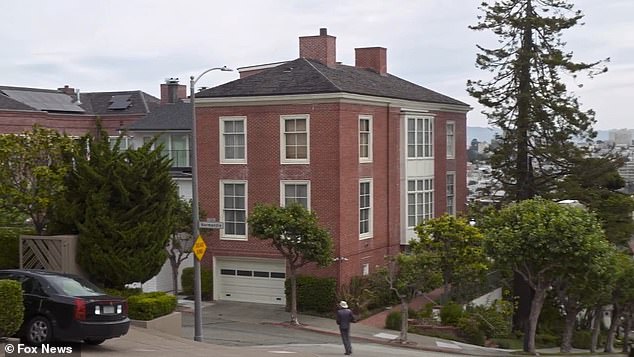 The protest came one day after the House adjourned for summer recess without passing a resolution to extend the nationwide ban on evictions, which the Centers for Disease Control first instated in September 2020 - in part to prevent the spread of the coronavirus through crowded shelters.

It expired at midnight on Sunday, after the Supreme Court ruled that the Centers for Disease Control could not unilaterally renew the moratorium as it had been doing for nearly a year.

Instead, the Supreme Court said, Congress would have to pass a resolution to extend it, leaving House Democrats scrambling Friday to pass the resolution by unanimous consent.

They were unsuccessful, however, without support from both sides, and left for a seven-week summer vacation without a resolution.

If they want to extend the moratorium now, the House would have to do a roll-call vote.

'The reason that we're at her house is that she has a beautiful mansion in Pacific Heights in San Francisco, and it shows how out of touch she is with the people that are facing a situation [of eviction],' Christian Evans, one of the protesters, told FOX News. 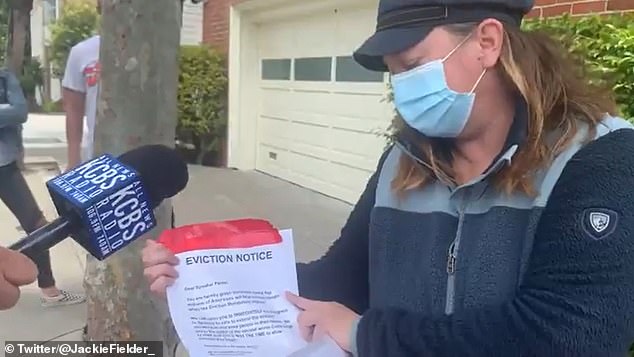 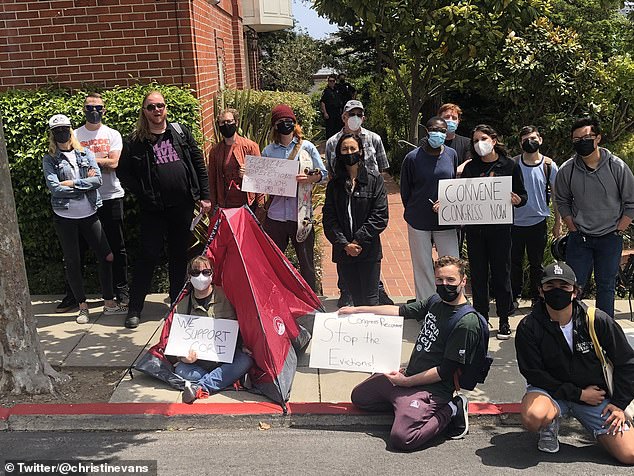 He said the issue of housing and homelessness was already a problem in the city, but the pandemic made the situation worse with people losing their jobs and facing medical emergencies.

In 2018, a United Nations official visited the city on a world tour examining housing conditions and concluded that San Francisco's treatment of the homeless 'constitutes cruel and inhuman treatment and is a violation of multiple human rights, including rights to life, housing, health, water and sanitation.'

The number of homeless people has since grown to more than 8,000 people in the city, NPR reported in June, and as of January 2020, California had about 151,000 people experience homelessness.

'We wanted to essentially send her a message that we want her to reconvene Congress to take a vote [to extend] the eviction moratorium,' Evans said.

It is unclear whether the House Speaker was home at the time of the protest, but the following day, she passed the blame onto the CDC.

'The CDC has the power to extend the eviction moratorium,' she tweeted. 'As they double down on masks, why wouldn't they extend the moratorium in light of [the] delta variant?'

'It's a moral imperative to keep people from being put out in the street, which also contributes to the public health emergency,' she added.

'The virus is still a threat, the moratorium must be extended and the funds Congress allocated to assist renters and landlords must be spent.'

Her spokesperson also told FOX News that Rep. Patrick McHenry's move on Friday to block a resolution that would have extended the moratorium until October 18 was 'an act of pure cruelty.'

'Ensuring every American has a roof overhead is a fundamental value that unites the Democratic Party and that personally drives the Speaker,' the spokesperson said in a statement.

'Speaker Pelosi led a relentless campaign to extend the CDC eviction moratorium,' the statement continued. 'Republicans blocked this measure - callously leaving children and families out on the streets.' 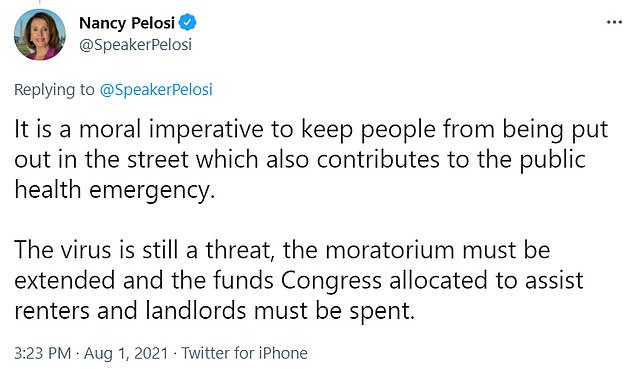 The next day she seemed to pass the blame on the Centers for Disease Control, which originally created the eviction moratorium and has been extending it for nearly a year

But this wasn't the first time protesters came to Pelosi's San Francisco mansion - in January, her home was vandalized with a pig's head surrounded in a pool of red paint, with her garage door defaced with graffiti reading: '$2k cancel RENT! We want everything,' an apparent reference to the stimulus check negotiations at the time. 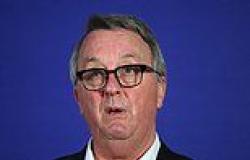 In largest ever increase, US homicides surge during pandemic mogaznewsen

Photo surfaces of Pauline Hanson with mysterious lover of 13 years - as they're ...

What is a rapid antigen test? Where can you buy them in Australia and how much ... 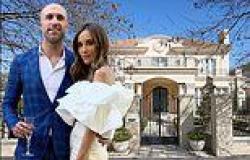