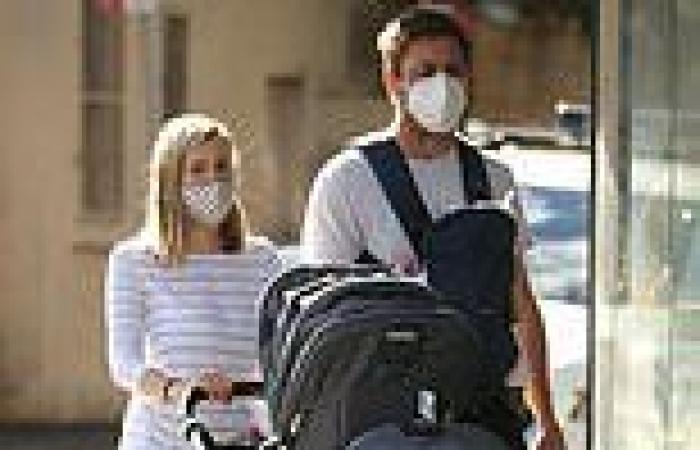 Another 199 cases of Covid-19 have been found in New South Wales overnight -  including 50 who were infectious in the community - as Gladys Berejiklian revealed the number of jabs in arms needed to ease Sydney's lockdown.

The NSW premier said transmission of the virus was still highest in the eight local government areas in the city's west and south-west with tightened lockdown rules.

Authorities have yet to find the source of infection for 111 of the new cases.

Ms Berejiklian on Tuesday said she wanted six million jabs in arms across NSW by the end of August - which would mean half the state's eligible population have received either their first or second jab of a Covid-19 vaccination.

She said reaching that target would give her 'additional options' in terms of easing the strict stay-at-home lockdown in Greater Sydney - which is set to expire on August 29.

'We're at 3.9 million [total vaccinations in NSW]. I suspect we'll be at four million by the end of the week,' she said. 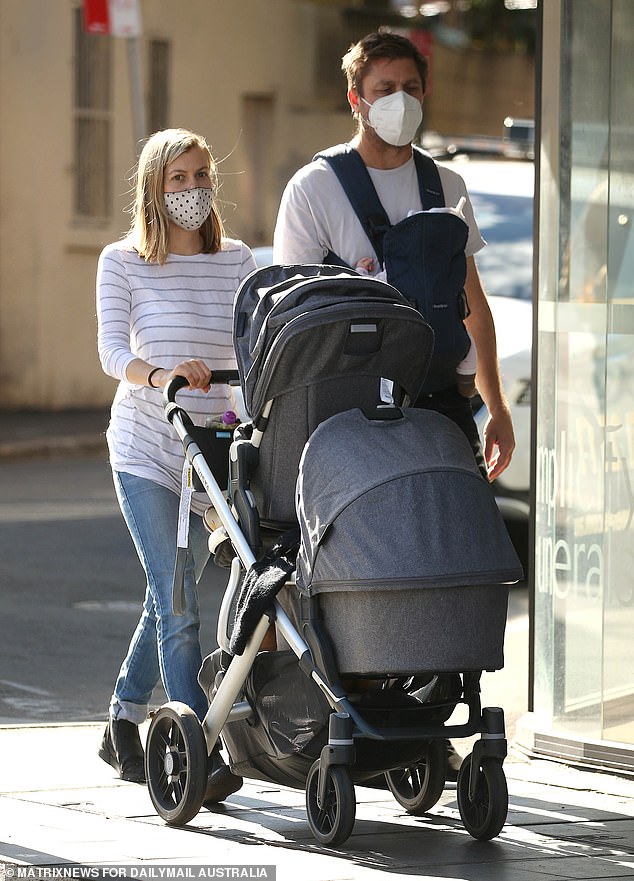 Pictured are pedestrians wearing masks in Newtown in Sydney's inner-west. The city is entering its sixth week of a strict stay-at-home lockdown

The announcement comes after worrying new modelling suggested there could be 600 new cases in Sydney each day by Friday if lockdown restrictions are not tightened across the city.

Infections could even hit an astonishing 7,700 cases a day in a worst case scenario by the end of August, experts predicted, similar to the thousands of daily cases seen overseas with the Indian Delta variant.

Evidence collated by Professors Allan Saul, Brendan Crabb AC, Margaret Hellard AM and Dr Campbell Aitken of the Burnet Institute on Monday showed tighter measures in the hotspot government areas may be working - but the rest of Sydney is teetering on a knife's edge. 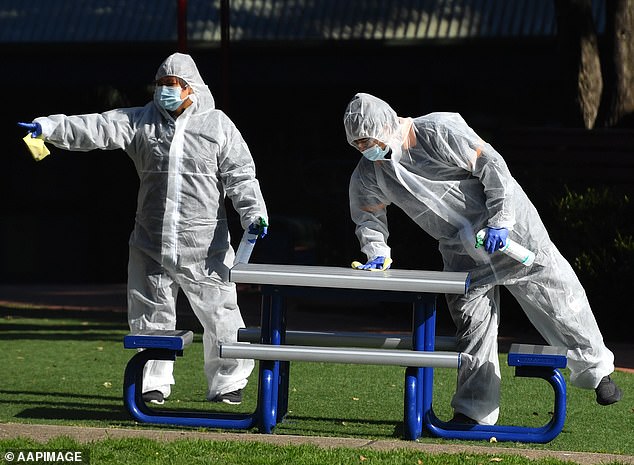 Cleaners are pictured in personal protective equipment at Strathfield South Public School in Sydney's inner-west on Monday. Researchers have predicted Sydney's lockdown could get much worse. 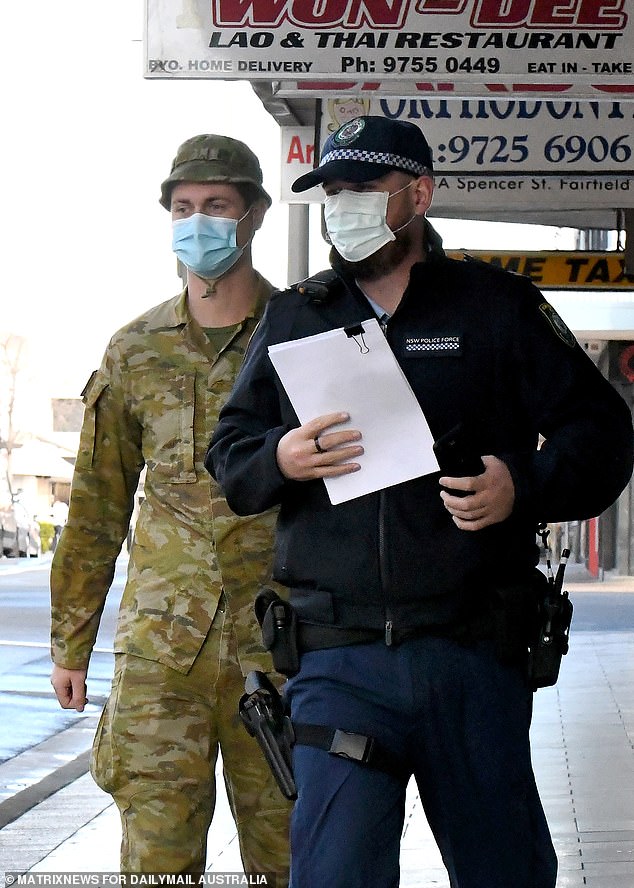 Pictured is a police patrol in Fairfield on Tuesday morning. The Fairfield LGA is one of eight parts of Sydney under tighter stay-at-home restrictions to slow the spread of the Delta variant 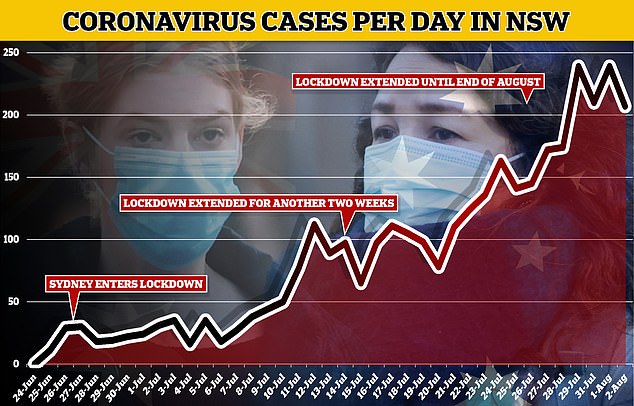 Infections are still doubling on average every nine days and Sydney's outbreak is teetering on a knife edge, experts have warned

This was clear in a late night drop of exposure sites released on Monday, including a Coles and Aldi on the city's lower north shore, as well as an auto parts store in Rockdale.

Using analysis of what restrictions did and didn't work during Melbourne's outbreak last year, the team of scientists found NSW's effective contact tracing, use of QR codes and record testing rates had helped stop the outbreak spiralling into thousands of daily cases.

Without such measures, and a lockdown, Sydney could already be looking at 1,000 daily cases - but infections are still doubling on average every nine days.

But the modelling, based on how infections have spread to date, still predicted the city would see 570 cases per day by Friday.

This is despite south-west Sydney's outbreak slowly coming under control, with infections still increasing rapidly in other areas of the city.

The upward trend of daily cases in south-west Sydney's Fairfield reversed on July 15, six days after the three initial LGAs restrictions were tightened.

Cumberland, Blacktown, Parramatta, Georges River and Campbelltown were added to the list of LGAs under stricter lockdowns on Friday and experts are hoping the numbers drop in those areas, but they say the restrictions should be broadened.

Victoria has reported four new local Covid cases as the residents along the state's northern border prepare for a bubble crackdown.

All cases are linked to Victoria's current outbreaks and were in isolation for their entire infectious period. Another infection was detected in a returned traveller in hotel quarantine.

It comes as Victoria bans non-essential movement across state lines because of the hovering threat of Sydney's Covid-19 Delta variant outbreak.

From 11.59pm on Tuesday, border-bubble residents will only be able to state-hop for six reasons including medical care, compassionate purposes, work, education, playing sport or getting vaccinated. 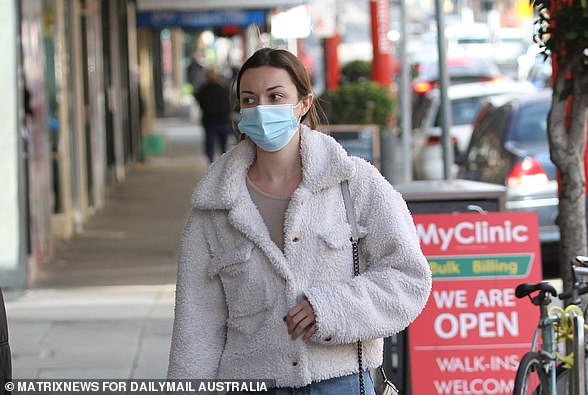 Victoria recorded four new cases of Covid-19 on Tuesday, all of which are linked to known outbreaks. Pictured: A woman walks through Melbourne

The new measure applies to residents on both sides of the NSW-Victorian border, who must also not travel any further than necessary for that specific purpose.

Anyone caught crossing the border for a non-essential reason could face a $5452 fine.

Health Minister Martin Foley said the move would burden people in border towns, but it was vital to keeping the virus out of the state.

'With the outbreak in New South Wales still growing, the public health advice is clear: we need to limit unessential movement across the border into Victoria where it is practical and possible,' he said. 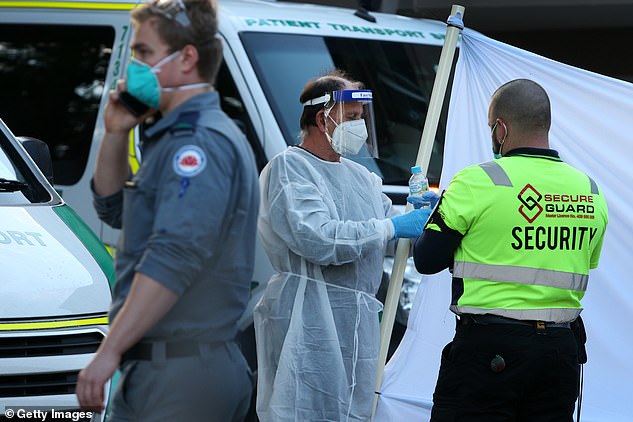 'Although the number of cases is still lower outside south west Sydney, daily cases in the rest of Sydney are now increasing at 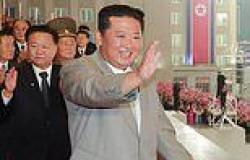 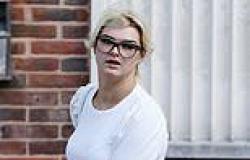 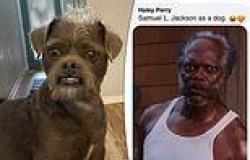 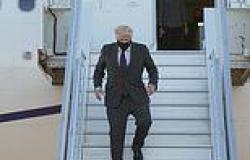 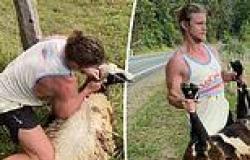