Bill and Hillary Clinton were spotted on the beach Tuesday during their annual ... 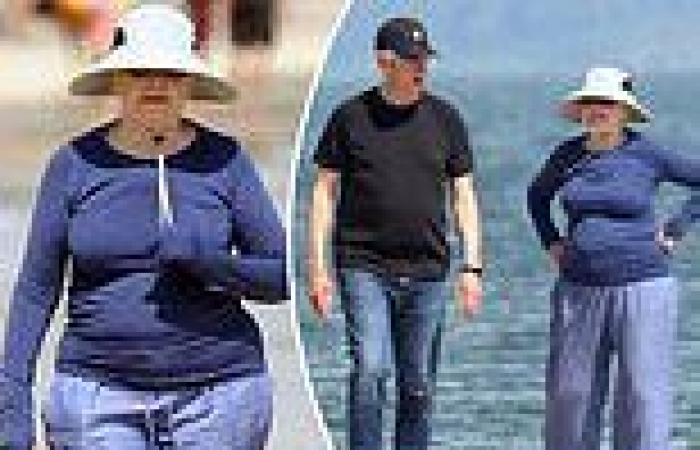 He's just celebrated his 75th birthday but it looks like the party is well and truly over for Bill Clinton.

Seen in these exclusive pictures obtained by DailyMail.com, the former president and wife Hillary, 73, looked more like glum and glummer than a couple enjoying the Hampton's sunshine when they went for a stroll on the beach earlier on Tuesday.

And perhaps it's little wonder. Because, while the Clintons have long since enjoyed an annual getaway to the Hamptons town of Amagansett, there is no escaping the past.

On September 7 the scandal that has dogged Clinton through the years is set to resurface once more as Ryan Murphy's much anticipated drama, 'Impeachment: American Crime Story,' will bring the Monica Lewinsky scandal roaring back onto our screens. 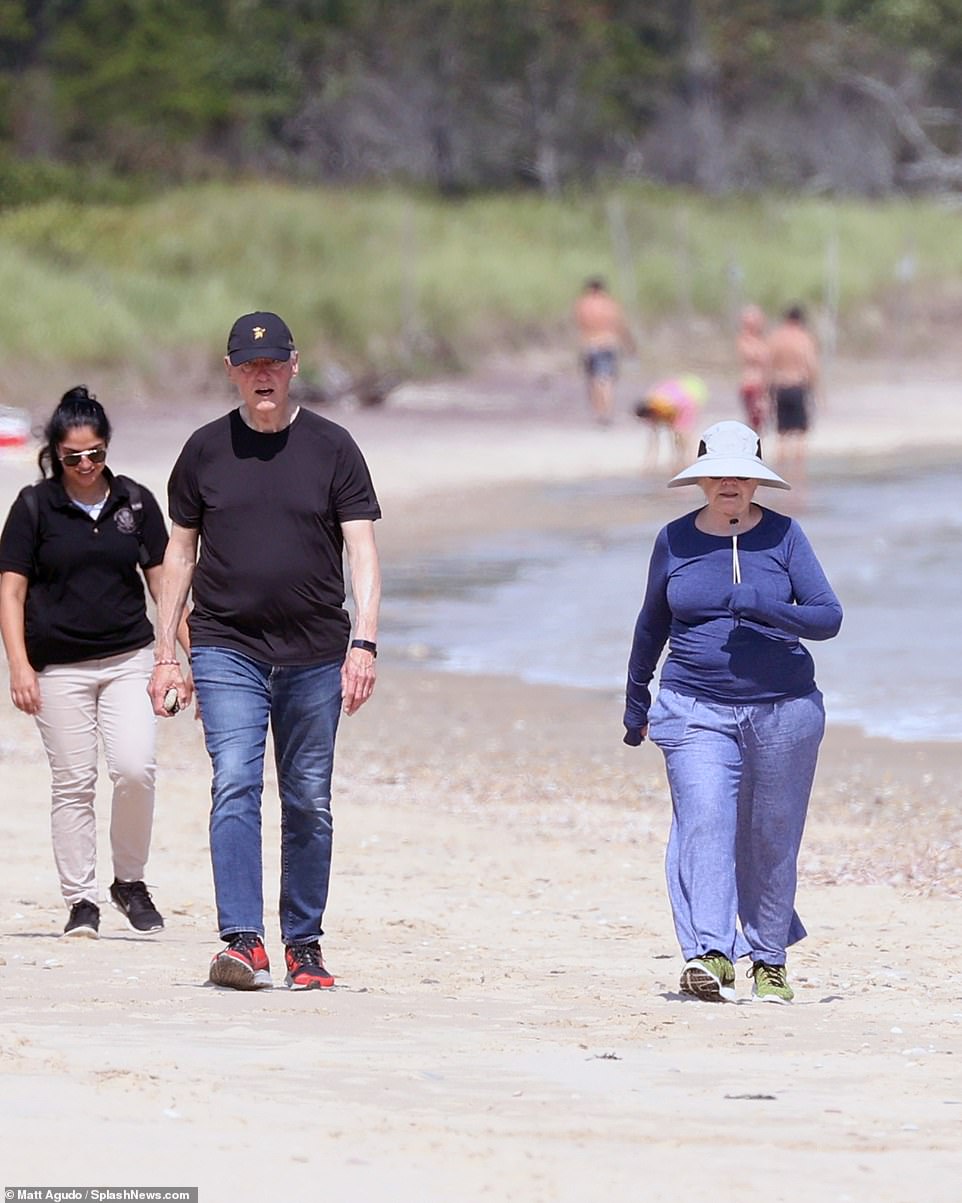 Bill and Hillary Clinton are seen in exclusive DailyMail.com photos taking a stroll on the beach Tuesday during their annual Hamptons getaway. But it's likely the calm before the storm as the scandal that has dogged Clinton through the years is set to resurface once more in Ryan Murphy's much anticipated drama, Impeachment: American Crime Story 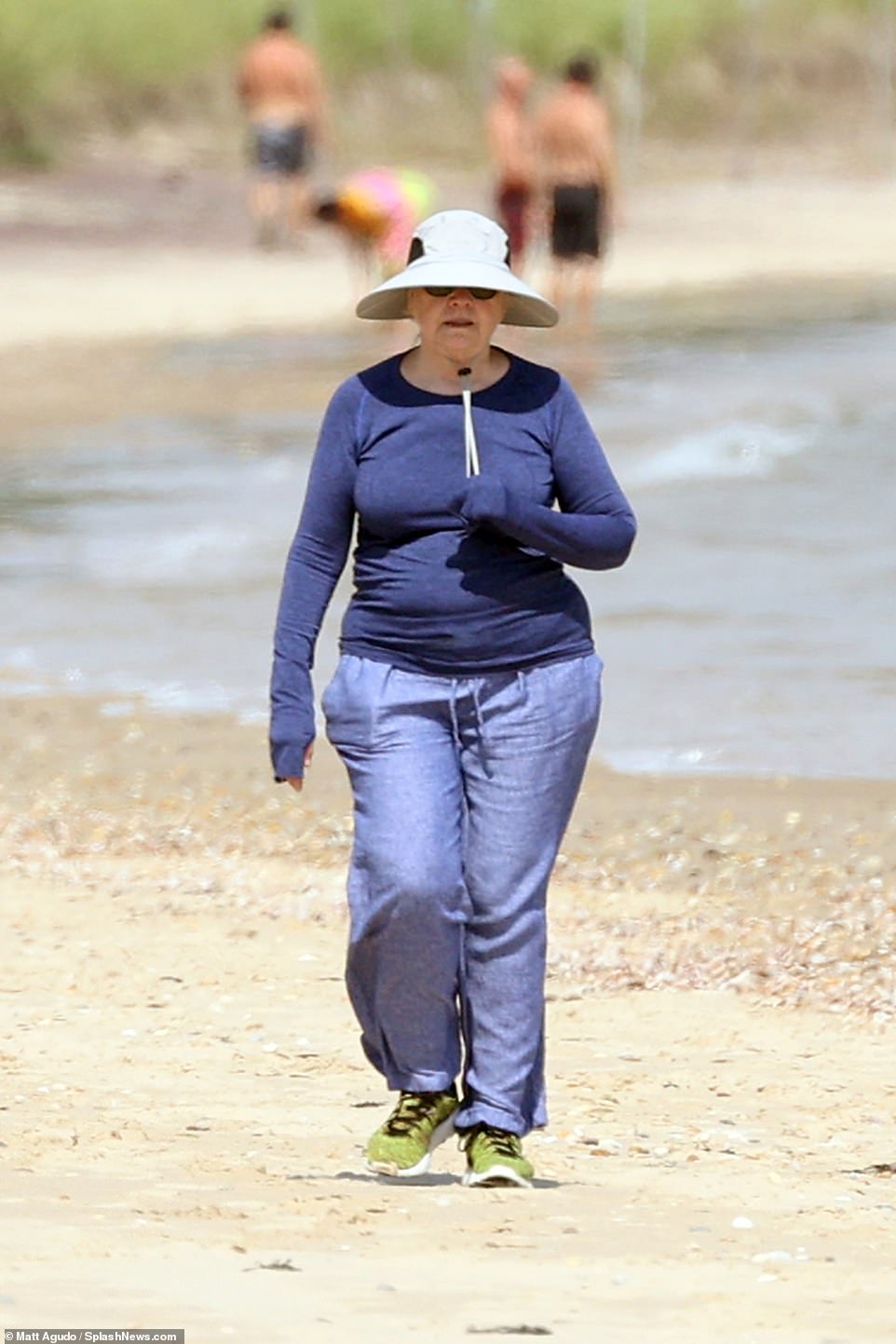 The failed presidential candidate appeared to be avoiding the sun, sporting a long sleeve shirt, baggy pants, and sunhat, as she walked on the beach in Amagansett 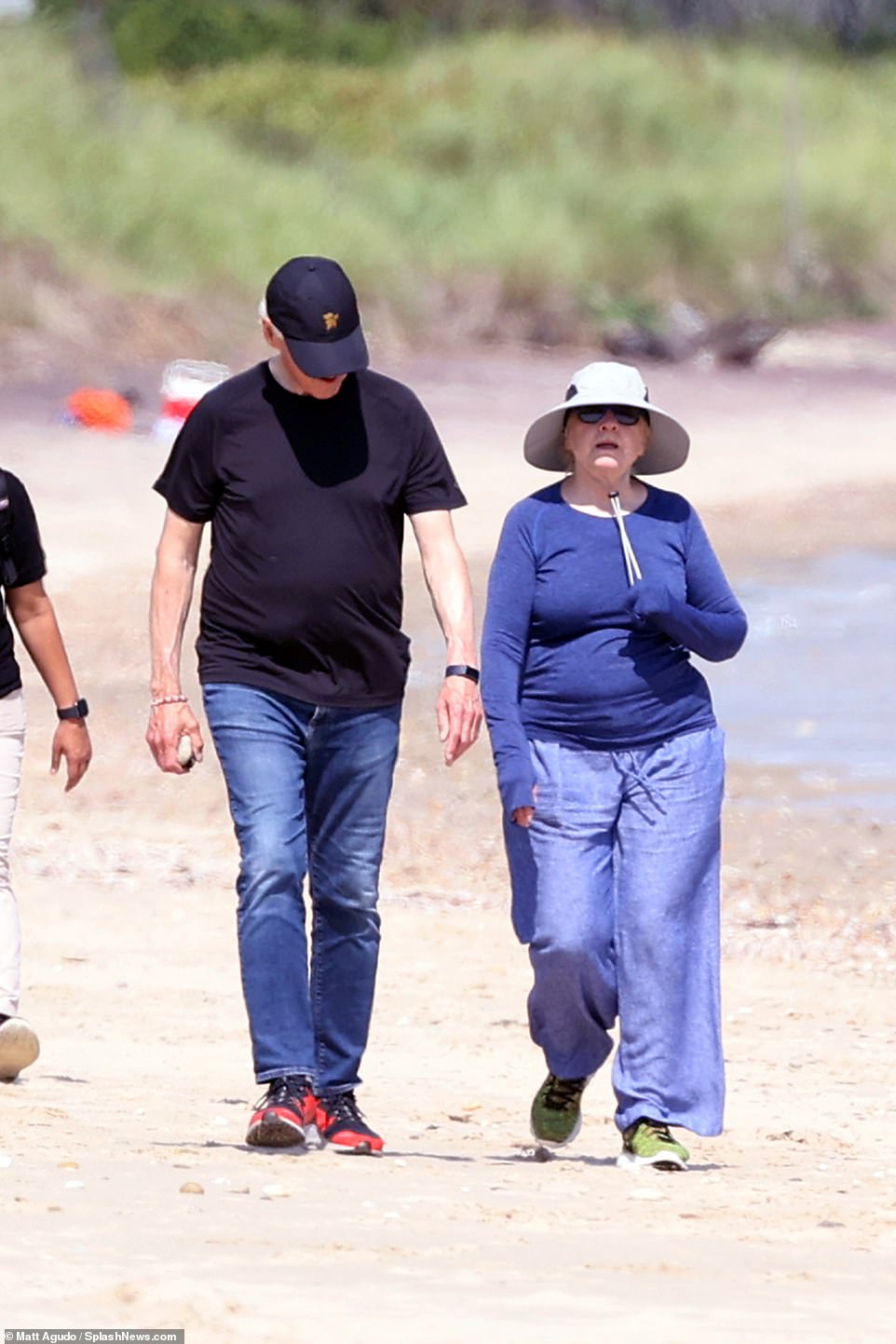 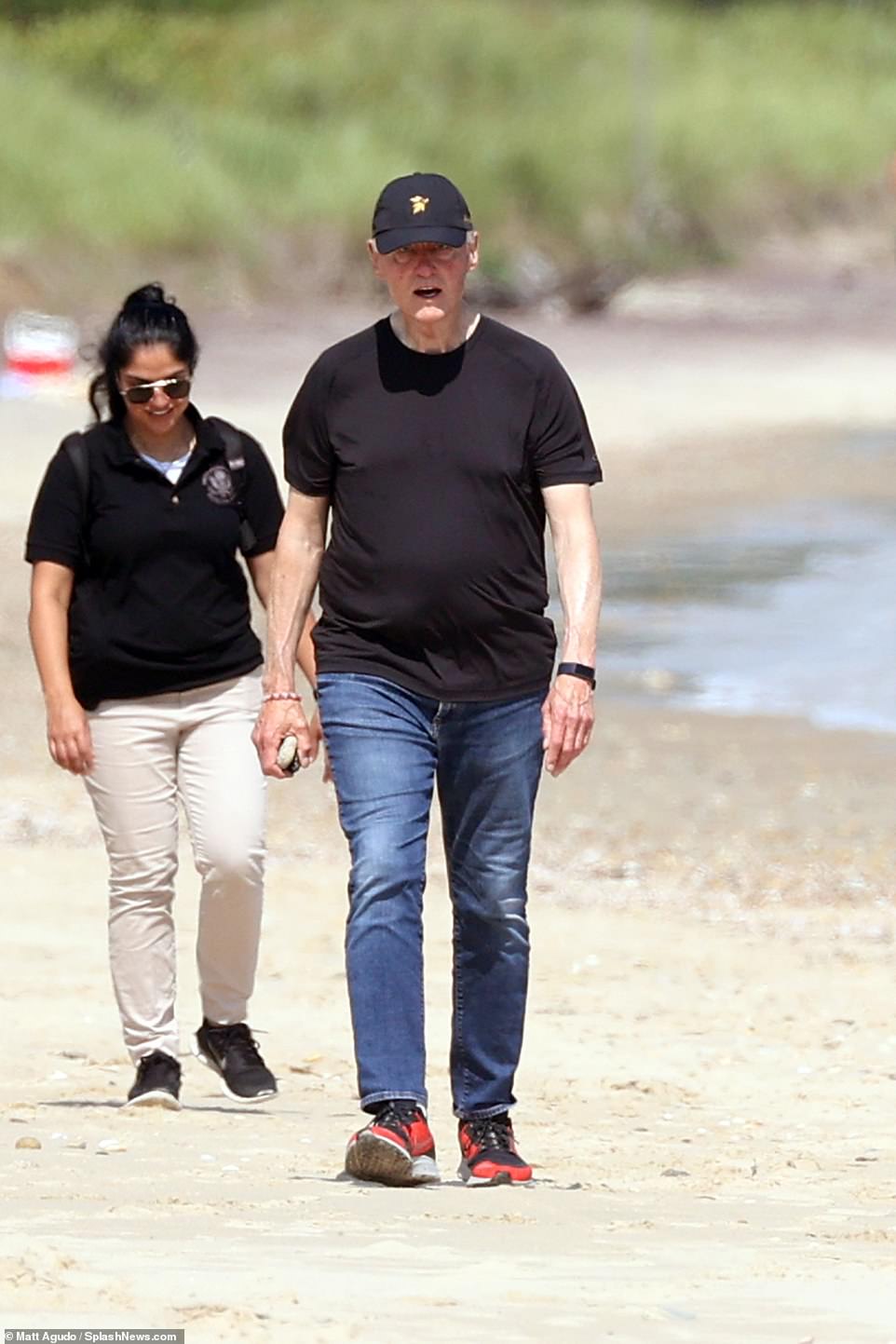 The former president, who just turned 75 on Thursday, cut a sober figure dressed in black T-shirt and blue-jeans, his eyes shielded by his black base-ball cap

Centering on the 'national crisis' that blew up around Clinton's sexual relations with Lewinsky - and his infamous denial of having had them - the show will track the events that led to Clinton's impeachment on December 19, 1998.

Starring Clive Owen as Clinton, Edie Falco as Hillary, Sarah Paulson as Linda Tripp, and Beanie Feldstein as Monica, the drama is spread across ten hour-long episodes but the most intimate it gets is a kiss between Lewinsky and Clinton.

Cold comfort for Hillary as, according to show writer Sarah Burgess, the reason for such restraint is that everybody already knows the 'graphic sexual detail' of the 90s scandal that made Monica's blue dress as notorious as the White House intern herself. 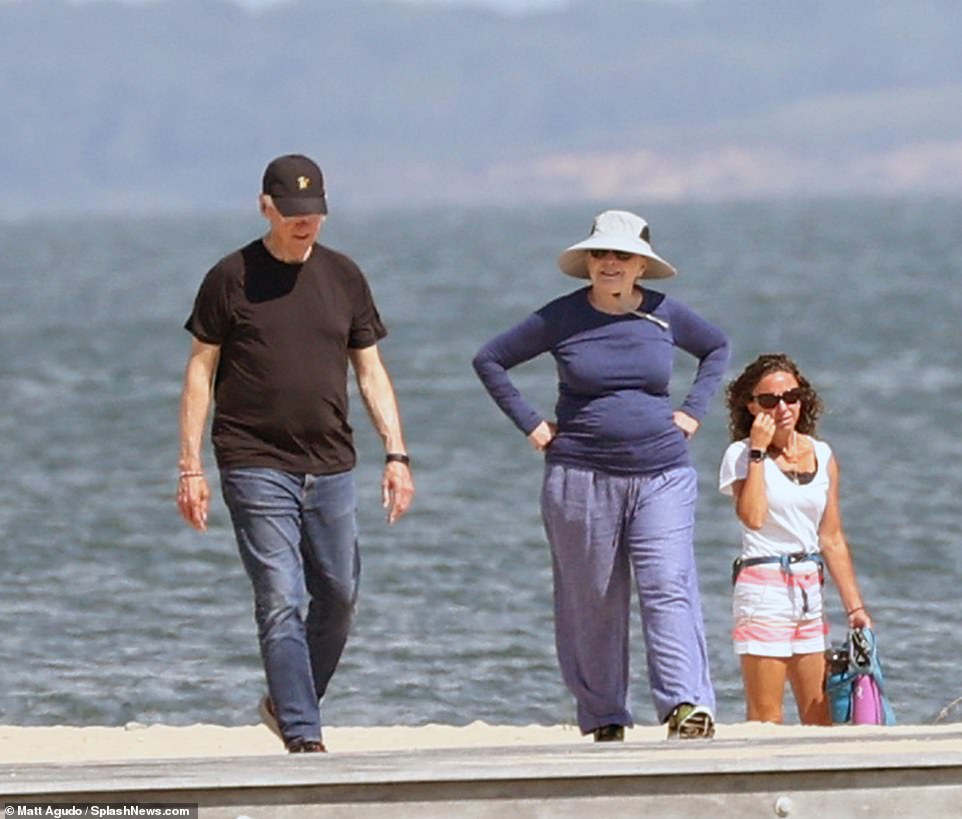 While the Clintons have long since enjoyed an annual summer getaway, there is no escaping the past, or the scandal that has dogged Bill through the years since he was impeached 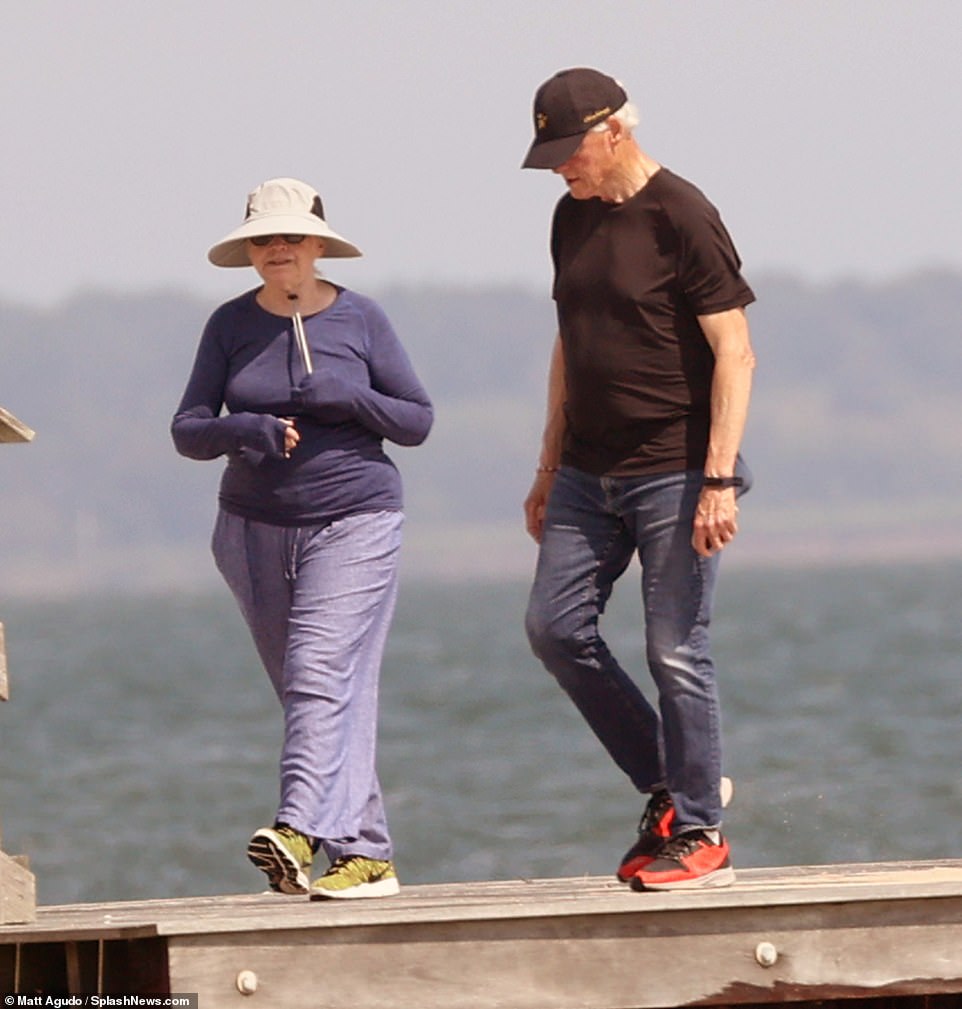 The sighting comes ahead of the Ryan Murphy's much