Internet jokers poke fun at 'most spacious submarine in the world' on BBC's ... 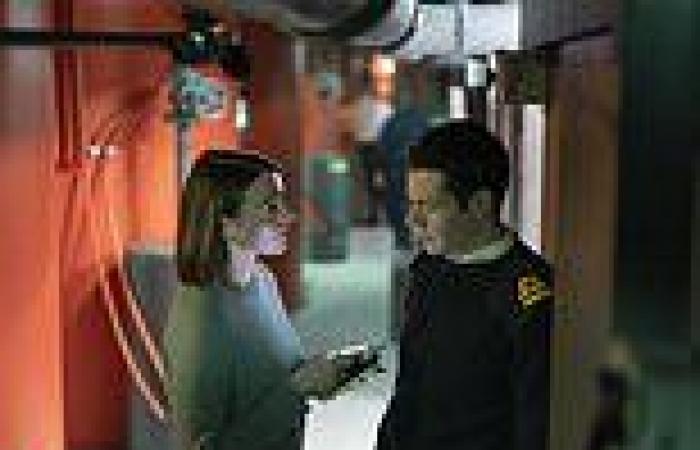 The BBC's new drama series, Vigil, continues to pull millions of viewers in each week as star Suranne Jones investigates a suspicious death onboard a nuclear submarine but not everyone has been impressed with the show's unique premise.

The military community have been vocal about what they feel are glaring inaccuracies in the show's portrayal of life onboard a Royal Navy submarine with everything from incorrect uniforms to the way the crew behaves.

The six-part series follows the mysterious disappearance of a Scottish fishing trawler and a death on-board the submarine HMS Vigil.

The subsequent investigation sees the police brought into conflict with the Navy and British security service, as Jones' DCI Amy Silva and DS Kirsten Longacre (played by Game of Thrones' Rose Leslie) lead an investigation on land and at sea into a conspiracy that goes to the very heart of Britain's national security.

MailOnline has spoken to experts in a bid to get to the bottom of why some viewers, particularly former submariners, are turned off by the BBC drama. 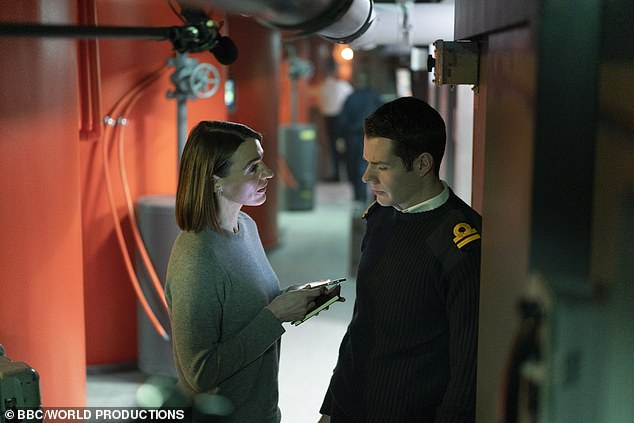 While the BBC's new crime thriller Vigil (pictured) continues to pull in millions of viewers every week, some have been quick to point out inaccuracies in the portrayal of life onboard a sub

Former Navy captain Ryan Ramsey, who has served as commanding officer on nuclear submarine HMS Turbulent between 2008 and 2011, said that because so little is known by the general public about submarine life, those in the know were hoping for some realism.

He told MailOnline: 'It's important to remember it's a crime drama and not a documentary but the reaction from the military community has been almost bipolar.

'Some have taken the view that yes, it's a drama so you know there are going to be inaccuracies but pointing out that it's not a realistic portrayal of life onboard is important.

'Others have just completely lost their minds over it and found it really quite frustrating.'

So what exactly have they said is inaccurate about the series?

Too much space onboard HMS Vigil 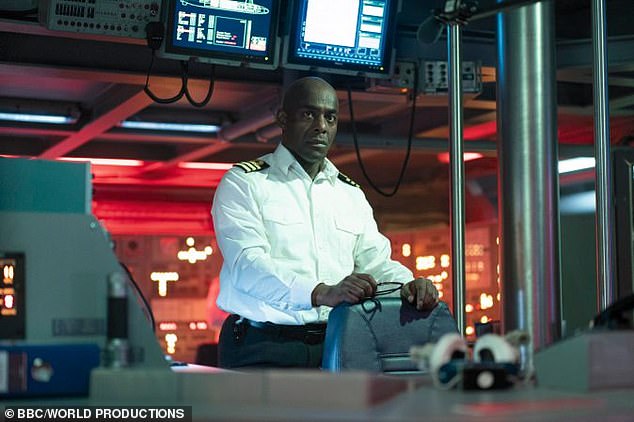 Viewers have taken to social media to poke fun at the BBC's latest drama Vigil (pictured), branding the submarine setting for its murder mystery 'the most spacious sub in the world'

The major point of contention for viewers has been the amount of space onboard HMS Vigil.

Former Navy captain Ryan Ramsey said this was the first detail that jarred with his real life experience onboard.

He told MailOnline: 'While they have more room than the attack submarines, the amount of room on HMS Vigil is unrealistic.

'I think if you know anything about submarines, you want an element of realism and there is just way too much room - they almost have more space onboard than a frigate.'

This sentiment was echoed by Alex Geary, curator at the National Museum of the Royal Navy, who has more than 20 years in research and curation. 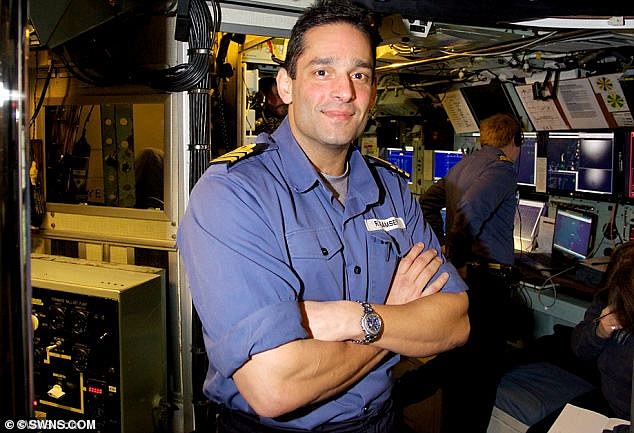 Former Navy captain Ryan Ramsey, who has served on nuclear submarine HMS Turbulent, says while it is a crime drama and not a documentary, it's important to point out that the BBC's new thriller Vigil does have some inaccuracies that do not reflect real life onboard a nuclear sub

She said: 'They are bigger than normal submarines but there is plenty of evidence out there where you can see that crew members have to turn sideways to pass each other in the corridors.'

More than 5million viewers tuned in to watch the launch of Vigil, making its debut the most watched show of the day closely followed by ITV's Vera.

The programme, from the Line of Duty creators, has been widely well-received with praise in particular for Jones' performance.

But the space onboard the submarine is not the only gaffe viewers have pointed out since it first aired at the end of last month. 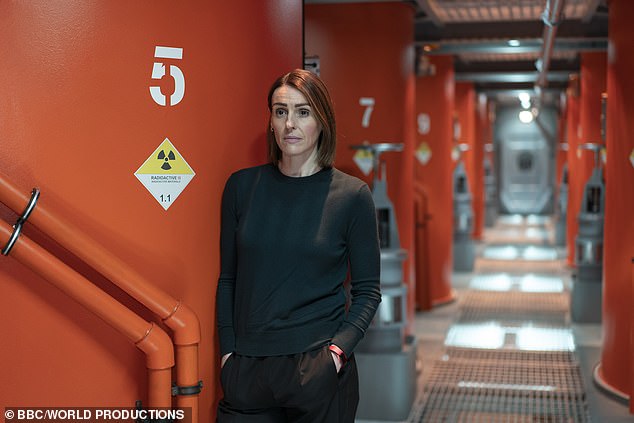 Experts say in real submarines, its normal to turn sideways when passing crew in corridors

Elsewhere, military personnel have hit out at the uniforms claiming they are inaccurate.

Navy museum curator Ms Geary said it seemed some of the badges on the uniforms had been completely made up.

She added: 'I'm guessing it's because they didn't have the authority to use the official uniforms but the colour and font used are incorrect.'

Ms Geary also pointed out that the uniform worn in the photograph of Craig Burke, played by Martin Compston, was incorrect.

Mr Ramsey suggested the use among characters was inconsistent, adding: 'It seems there's one character with a uniform from about 10 years ago while another has a uniform that looks more recent.'

Meanwhile, Royal Navy reservist Tony Matthews wrote on Twitter: '#HMSVigil is not only awful because of the numerous technical errors but because of the dreadful acting and script. 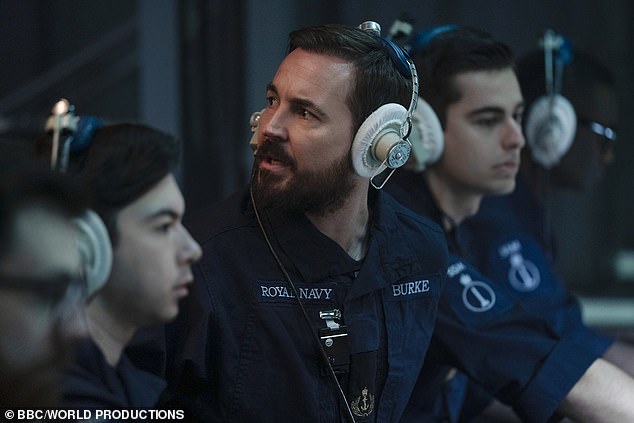 'Morse is the Coxn and even he can't solve it. Worst series off [sic] the year so far. The uniform errors alone are criminal.'

One ex-Navy user wrote: 'Why is a chief petty officer wearing number 1s for an AB rating. THAT IS NOT UNIFORM FOR A CHIEF PETTY OFFICER!!!! #vigil

'Whoever did the research for this show should be sacked. This is basic!'

While another added: 'The wacky White Ensign is the most distracting of the bizarre uniform shenanigans (and there are very many). #Vigil'

Writer and ex-soldier Rob Pitt wrote: 'Honestly BBC, I love you and #HMSVigil is lovely… genuine bravo to the whole team…

'…but I'll be a military continuity consultant FOR FREE just to prevent my fellow veterans from exploding when you get the uniforms and stuff wrong.'

There seems to be some debate about whether the Vanguard class submarine would alert the authorities if there had been a death onboard.

Mr Ramsey told MailOnline: 'In reality, it would completely depend on the type of operation you were on.

'The whole point is not to give away your position so to turn around and say they would make themselves known and allow a civilian onboard then go back on patrol is unrealistic. 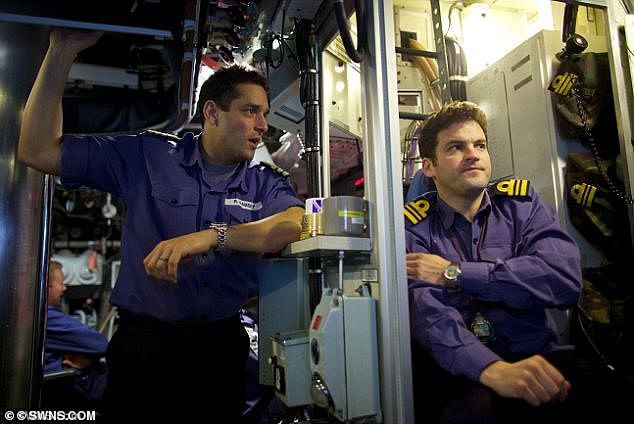 'They would either stay out on patrol or return to the port - maybe the body could be airlifted off but there is no way they would board a civilian and allow them to carry out their investigation while the sub was still carrying out its duty.'

Former submariner David Lovell, who also served in the Royal Navy for 23 years, told the Metro that it is unlikely a patrolling nuclear submarine would surface to report a death onboard.

Mr Lovell said: 'The primary aim of the vessel, whilst on patrol, is to remain undetected. Undetected by any – hostile or friendly – ship, submarine, aircraft, radar, sonar, non-acoustic system, satellite, 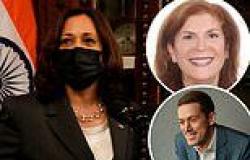 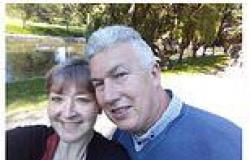 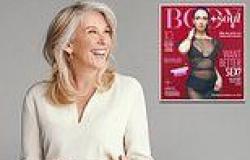 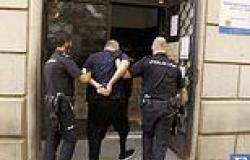