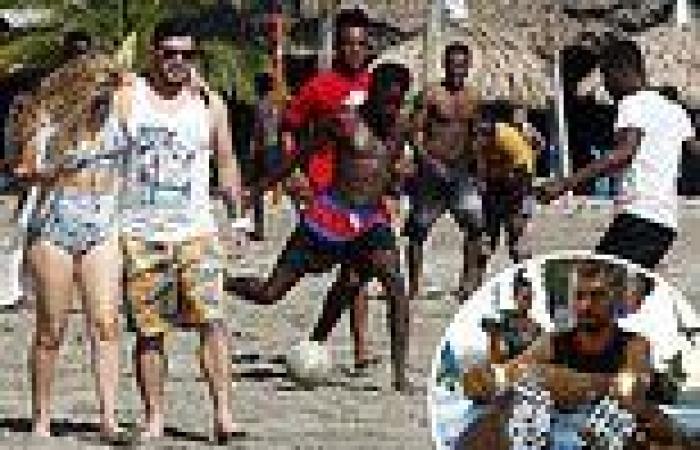 Photographs show brief moments of normalcy as Haitian migrants try to make their way to the United States.

Images captured Sunday show tourists wondering about a Colombian beach as Haitian migrants play soccer while they wait to embark for the dangerous Darien jungle and begin their journey to the US.

The newly released images come as thousands more Haitian migrants are embarking on a perilous journey through Latin America to reach the US, after US officials cleared out an encampment nearly 17,000 strong outside Del Rio, Texas last week.

Up to 4,000 Haitian migrants have already crossed the Darien Gap in Panama along the Colombian border, a roadless, 66-mile stretch of treacherous jungle, Panamanian government sources tell Reuters. Some of them wait in camps in Mexico before continuing their journey.

Meanwhile, another 16,000 wait at a northern Colombian border town, Necocli, waiting for their shot to jump on a boat to take them to the Darien Gap, where smugglers will guide them north through one of the most inhospitable regions in Latin America.

Homeland Security Secretary Alejandro Mayorkas admitted on Sunday that 12,000 Haitian migrants have been released into the U.S. He claims that number could go up as 5,000 other cases are still being processed. 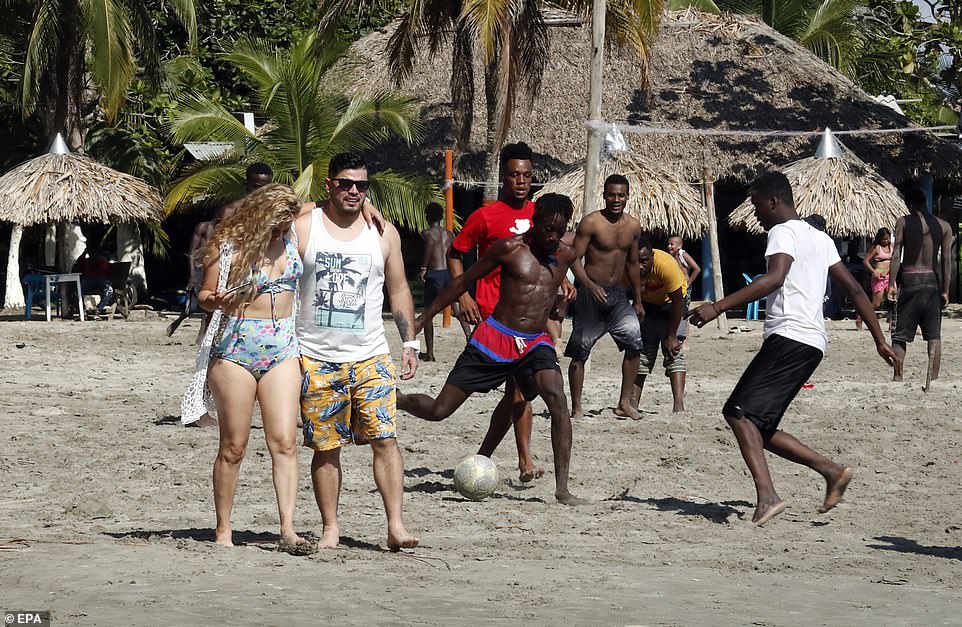 Photographs show brief moments of normalcy as Haitian migrants try to make their way to the United States. Tourists are seen wondering about a Colombian beach as migrants play soccer while they wait to embark for the dangerous Darien jungle 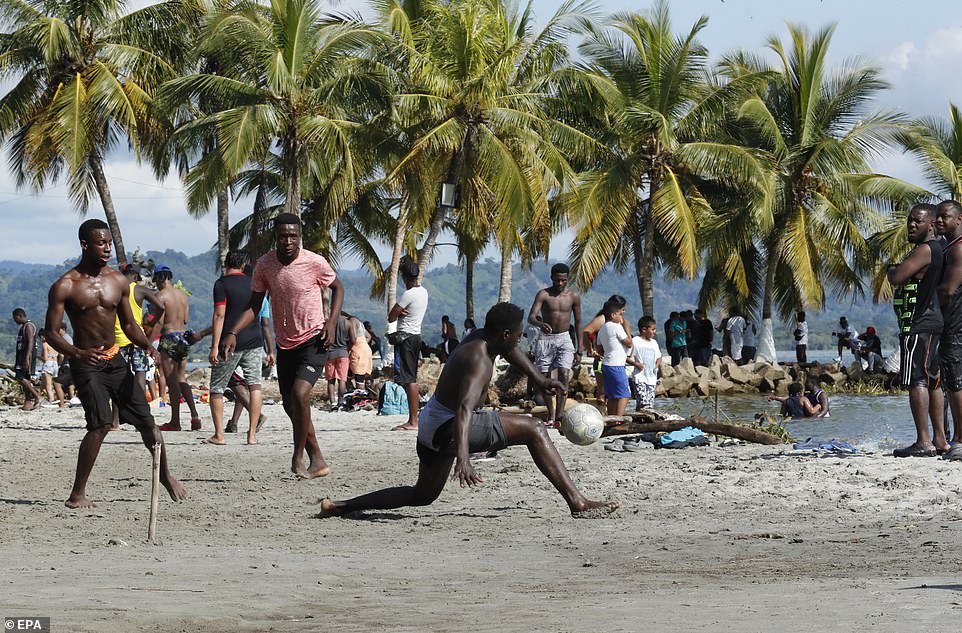 Haitian migrants play soccer as they camp on a beach in Necocli, Colombia on September 26 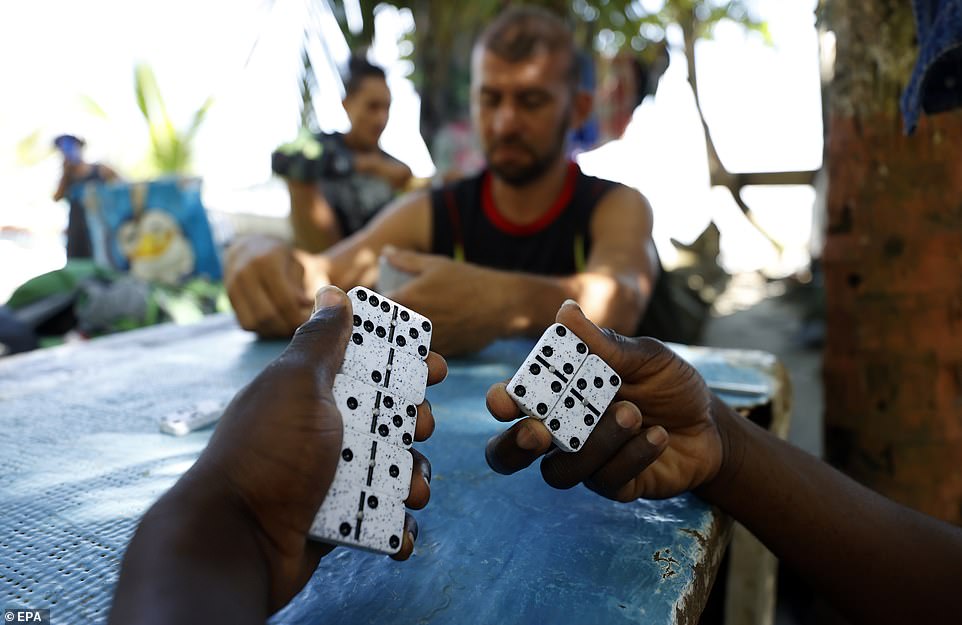 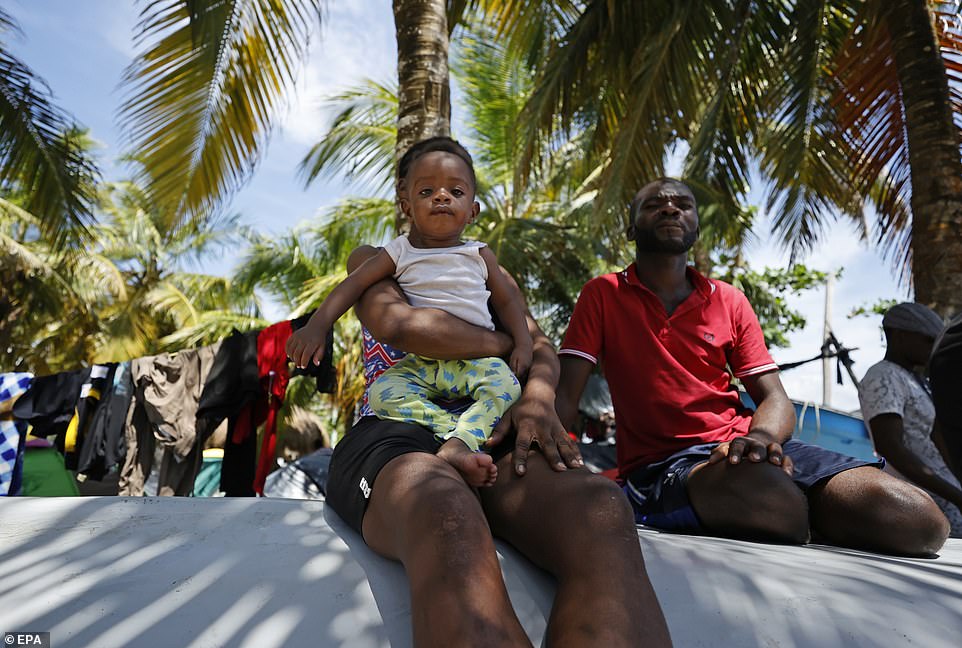 A woman is seen holding a child as she sits at the migrant camp on a beach in Necocli, Colombia 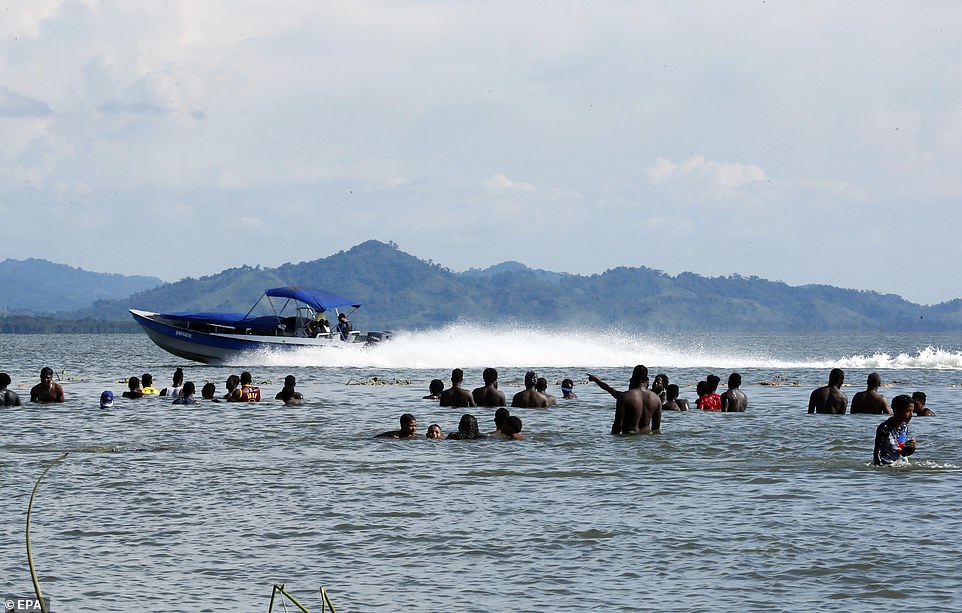 Migrants are seen enjoying the beach as they remain stranded waiting for boats to cross into neighboring Panama on their way to the U.S.

They are finding ways to unwind as they wait for space on boats that cross will to the other side of the Gulf of Uraba, the end of Colombia, where some 17,000 people wait to continue their way to North America.

Only 500 people each day can board on the boats that leave them in Acandi - a town in northern Columbia - to begin their journey through the Darien Gap, which separates Colombia from Panama.

The photos from the beach paint a strikingly different narrative than images showing caravans of migrants attempting to cross through jungles, rivers and other dangerous conditions. 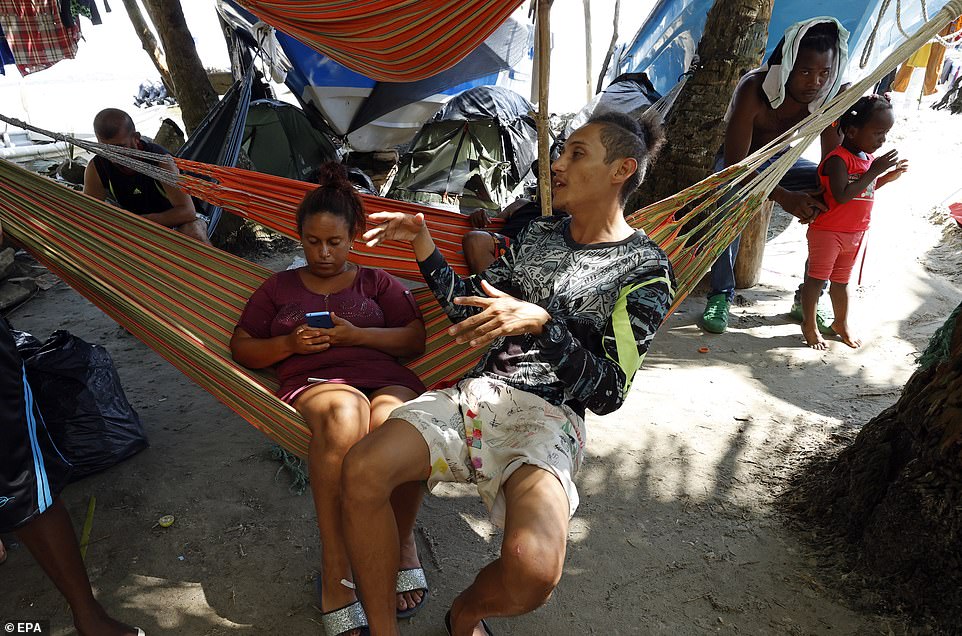 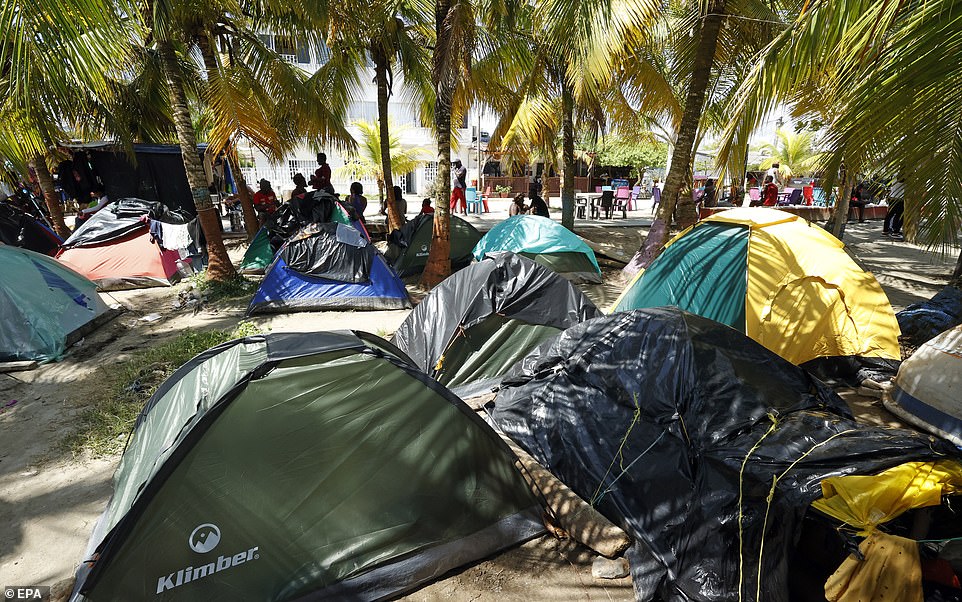 Haitian migrants camp on a beach in Necocli, Colombia. Many of them arrived days, even weeks ago, from Chile or Brazil, as part of their route towards the United States 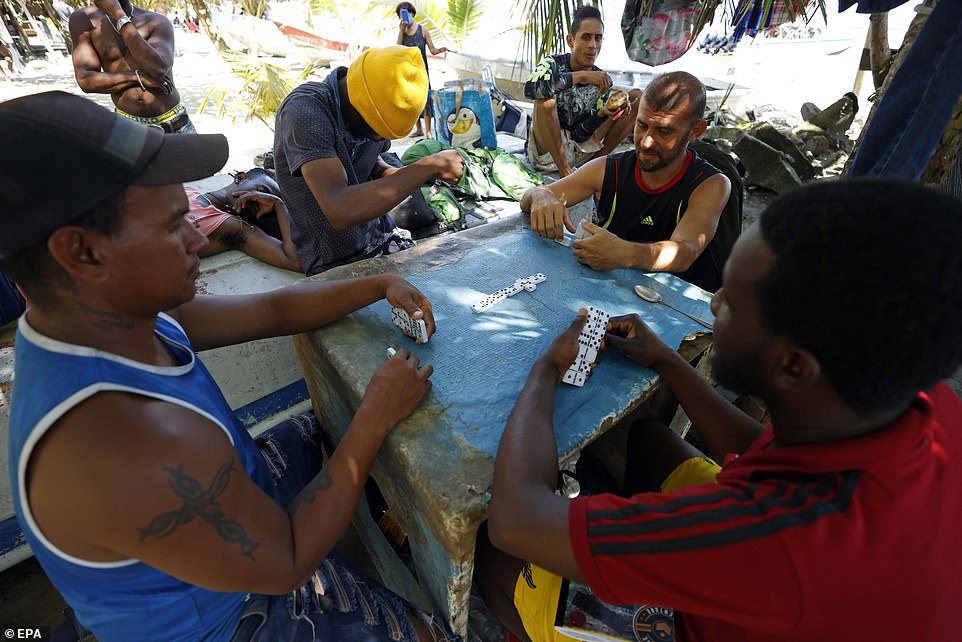 Haitian and Venezuelan migrants play dominoes in Necocli, Colombia on September 26 as they wait for space on the boats that will help them cross to the other side of the Gulf of Uraba 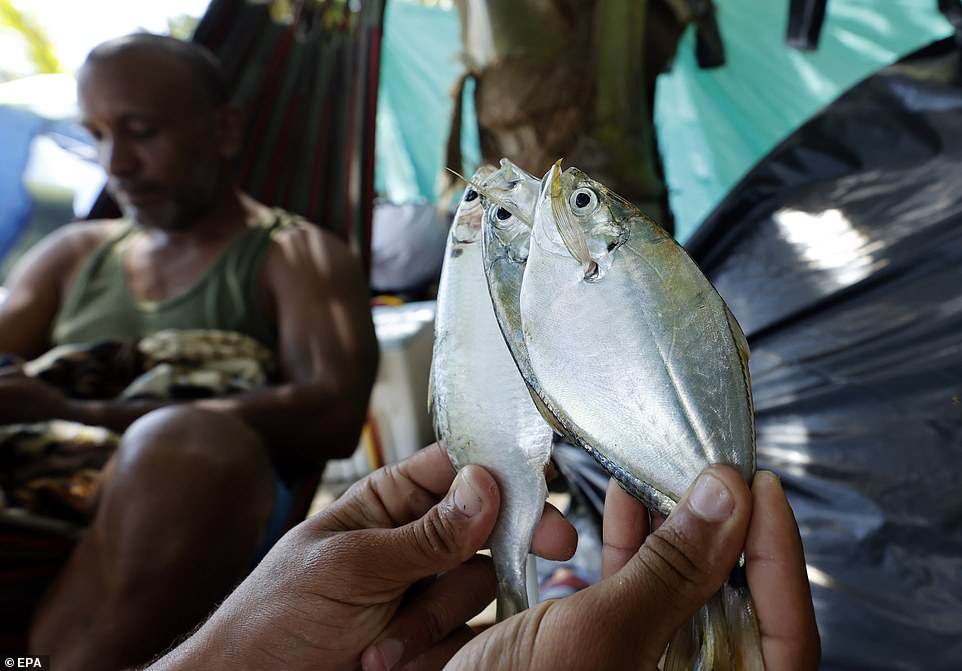 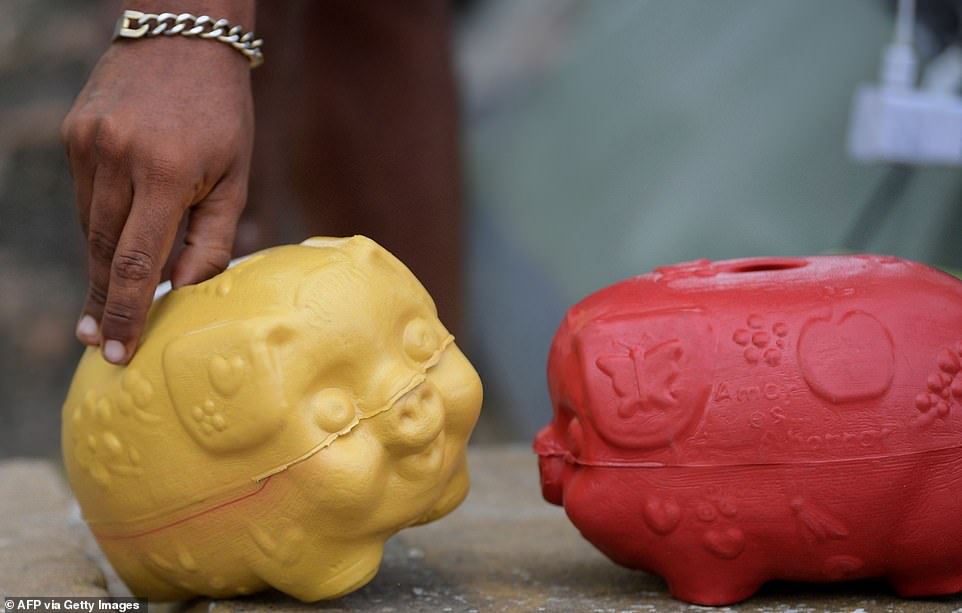 A migrant is seen touching a piggy bank in Necocli, Colombia over the weekend 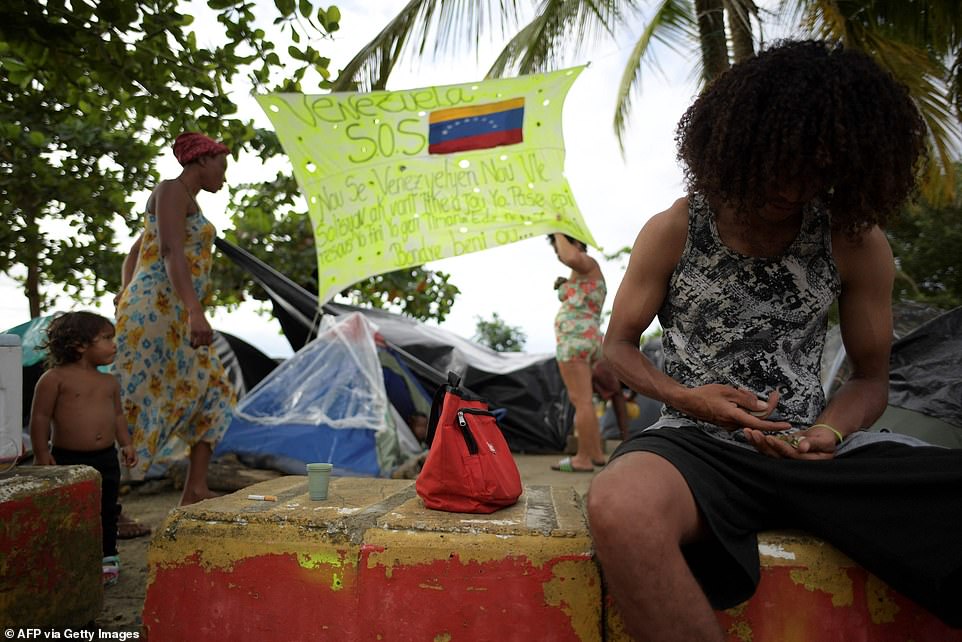 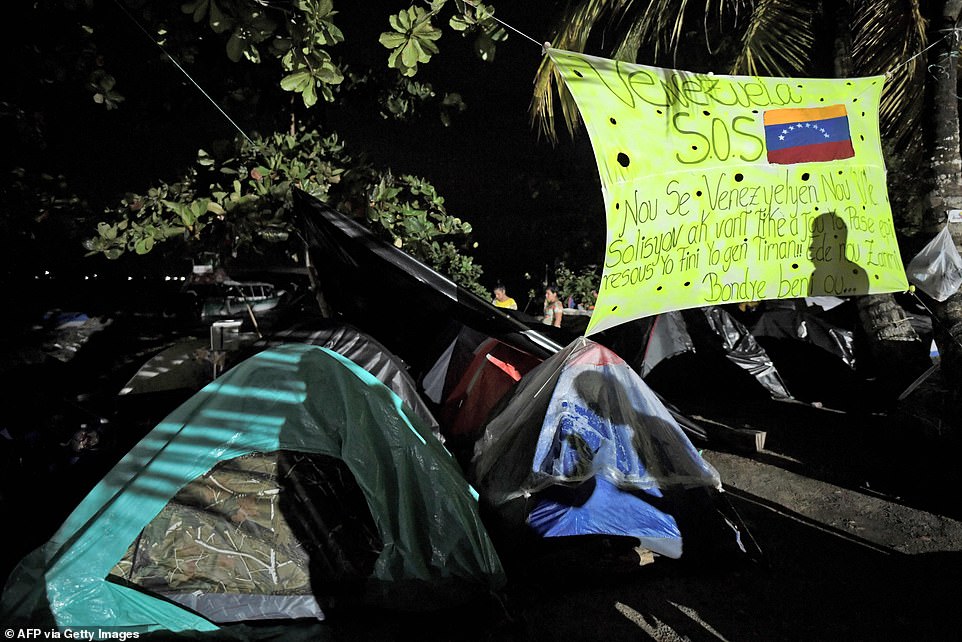 While 16,000 people remain in Necocli waiting for smugglers to help them cross through 'one of the most dangerous and impassable regions of Latin America,' approximately 4,000 migrants have passed through Panama and are en route to the U.S., The Hill reported on Monday.

The group is largely comprised of Haitians, but also includes some people from Cuba, Venezuela and other nations.

Images shared over the weekend show migrants hiking through the jungle and wadding across waters.

Men, women and children were seen carrying their minimal belongings through the treacherous conditions.

Both Colombia and Panama are allowing 500 migrants to cross through their borders each day, a number that is 'far fewer' than the 1,500 arrivals that have been reported daily.

Panama President Laurentino Cortizo announced at the United Nations General Assembly on Thursday that more than 80,000 migrants have traveled through the nation this year.

Haitian Prime Minister Ariel Henry argued that those numbers would continue because of 'global inequity'.

'Migration will continue as long as the planet has both wealthy areas, whilst most of the world's population lives in poverty, even extreme poverty, without any prospects of a better life,' he told the U.N. on Saturday. 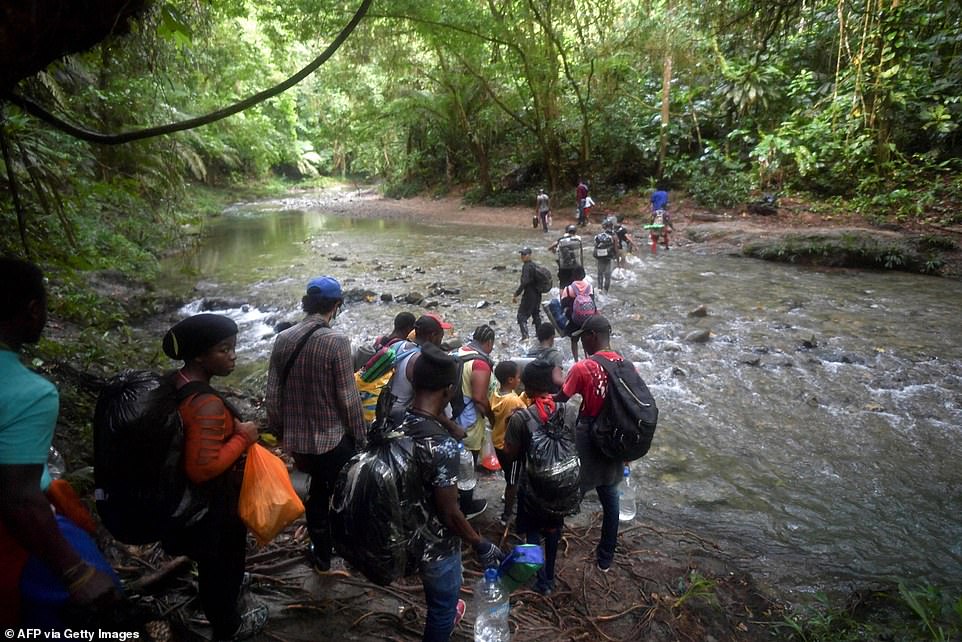 Haitian migrants cross the jungle of the Darien Gap, near Acandi, Choco department, Colombia, heading to Panama, on September 26, 2021, as they try to reach the US 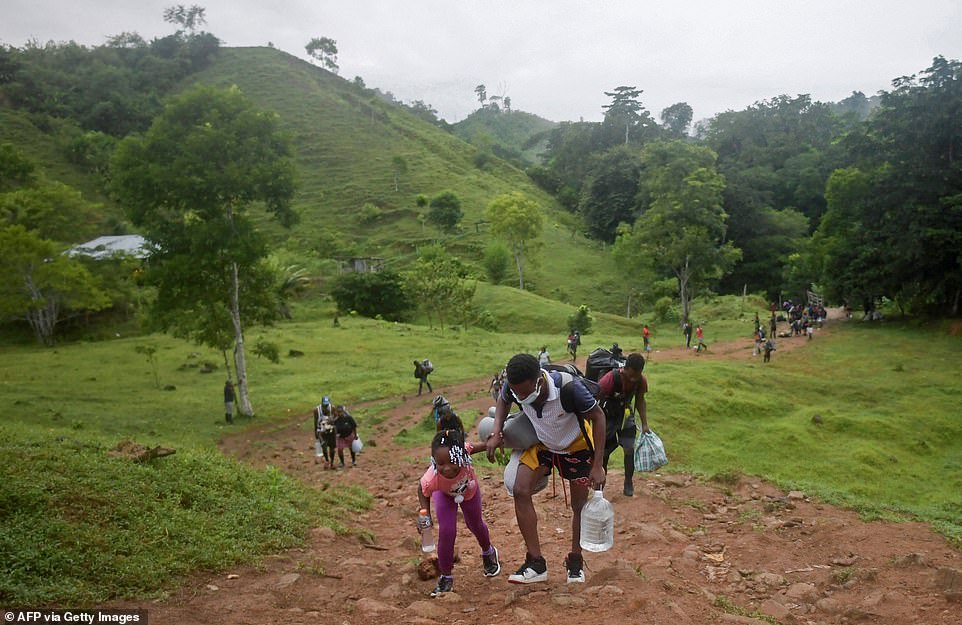 Images shared over the weekend show migrants hiking through the jungle and wadding across waters. Men, women and children were seen carrying their minimal belongings through the treacherous conditions 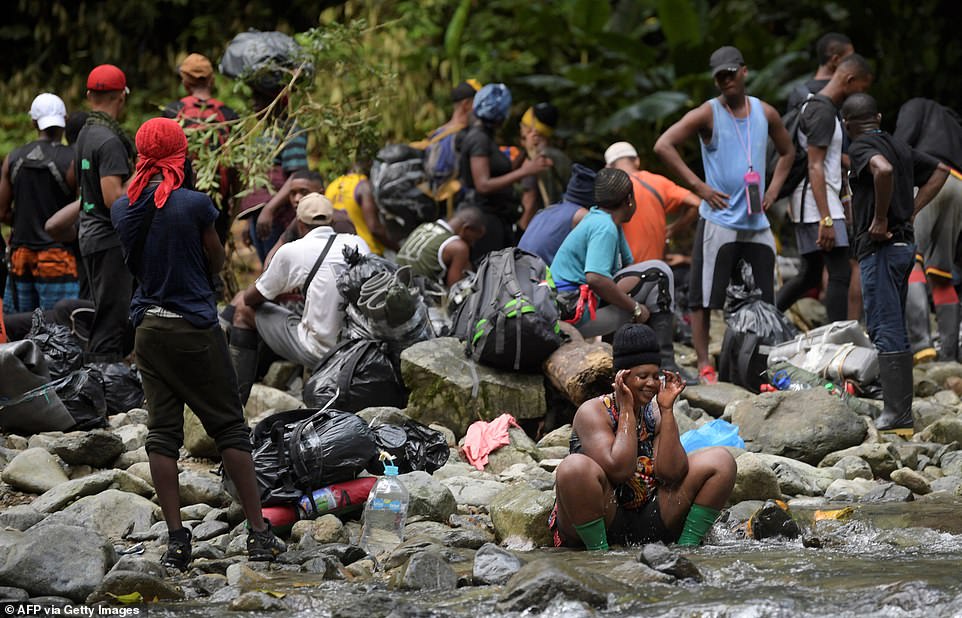 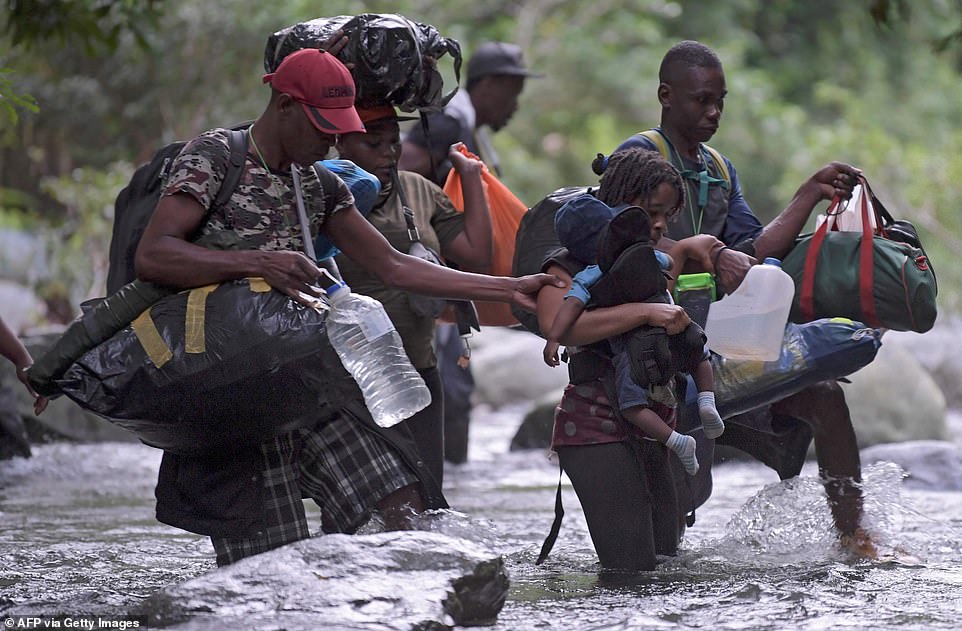 Both Colombia and Panama are allowing 500 migrants to cross through their borders each day, a number that is 'far fewer' than the 1,500 arrivals that have been reported daily 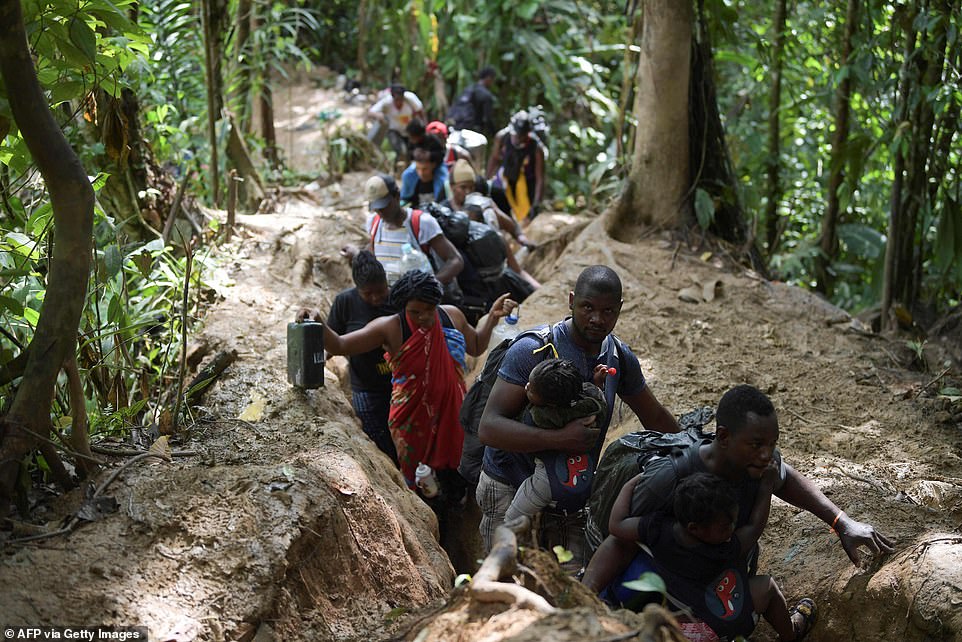 While 16,000 people remain in Necocli, Colombia waiting for smugglers to help them cross through 'one of the most dangerous and impassable regions of Latin America,' approximately 4,000 migrants have already passed through Panama and are en route to the U.S. 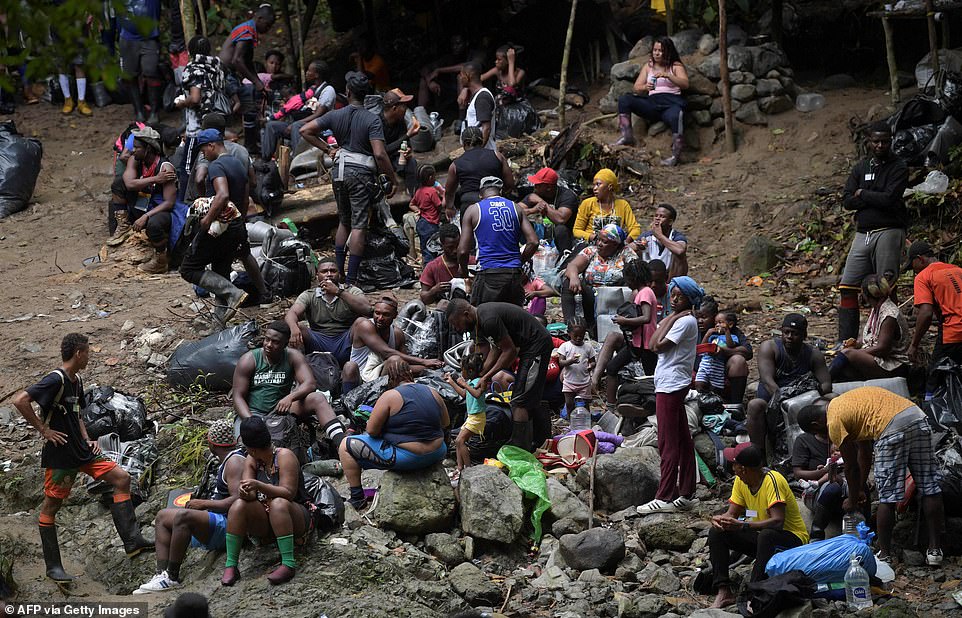 Thousands of migrants continue attempt to make their way from South America to the U.S. borders (Pictured: Migrants crossing the Darien Gap near Acandi) 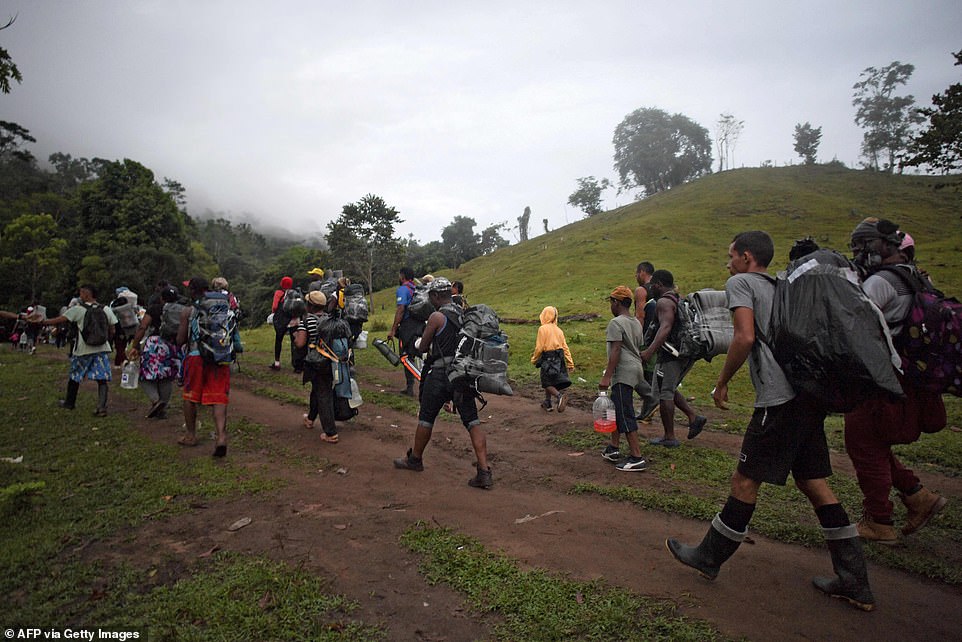 A group of migrants is seen hiking through the jungle region on Sept. 26, carrying water bottles, sleeping bags and other essential supplies 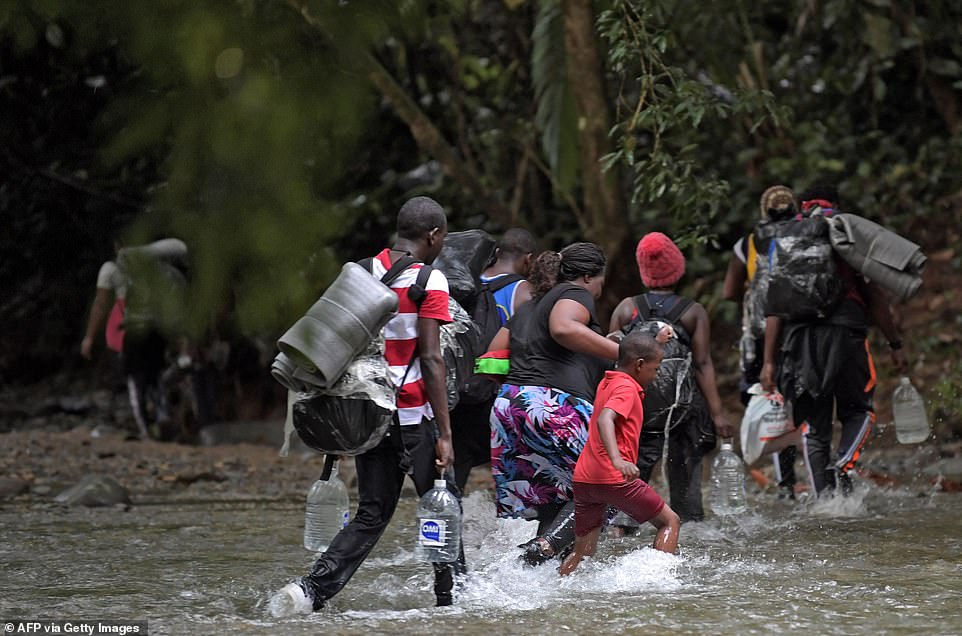 Why Haitians are fleeing to America:

Thousands of Haitians have crossed the border into Texas in weeks and months to seek asylum in America.

Most Haitians who have traveled to the border in recent weeks are thought to have already been living in South America after the magnitude 7.0 earthquake in January 2010 which killed over 200,000 people.

Many have then traveled up through Mexico into the US  recently - driven by the toll of the COVID-19 pandemic on South America.

Republicans have argued that the influx of people has also been driven by the pause on deportation flights to Haiti by the Biden administration.

In May, the Biden administration's DHS designated Haiti for temporary protected status (TPS) as the nation was in the grips of 'human rights abuses, crippling poverty, and lack of basic resources, which are exacerbated by the COVID-19 pandemic.'

Under TPS, foreign nationals cannot be deported back to countries hit by natural or manmade disasters, enabling Haitians to live in the US without legal status to qualify for provisional residency.

Then, in early July, Haitian President Jovenel Moïse was assassinated in his home of Port-au-Prince in a dramatic plot which authorities are yet to determine who the mastermind was.

The murder threw the troubled nation into uncertainty with gun battles breaking out in the streets and a fight over who was the rightful successor as questions continued to mount about a possible inside job.

This week, Haiti’s chief prosecutor said there was evidence linking the country's Prime Minister Ariel Henry to the plot and banned him from leaving the country until he answers questions about his potential involvement.

One month after the assassination, the island nation was dealt another blow as a magnitude 7.2 earthquake struck in August. More than 2,200 people were killed and 100,000 homes destroyed.

In August, Biden extended and expanded the TPS further. While it only applies to Haitians already residing in the US, critics argue many have traveled there believing they can seek asylum.

Meanwhile last week U.S. officials cleared out an encampment of nearly 17,000 Haitian migrants under the International Bridge outside Del Rio, Texas. Department of Homeland Security (DHS) Secretary Alejandro Mayorkas admitted Sunday to Fox News' Chris Wallace that as many as 12,000, possibly more, had been released into the US.

Nearly 4,000 were sent away under Title 42, a coronavirus public health order.

Former President Trump, meanwhile, claimed that the migrants had been released 'with no vetting, checking or even minimal understanding of who they are.'

'Some are very sick with extremely contagious diseases, even worse than the China Virus. They are not masked or mandated, but just let free to roam all over our Country and affect what was just a year ago, a great Nation.'

It's not clear what diseases the former president was referring to.

'It's much more than that and he knows that,' Homan said.

In an interview with Fox on Monday morning, the Trump-era immigration official said Mayorkas underestimated the number of migrants successfully crossing the southwest border because he didn't account for people who were never confronted by border agents and so are harder to track down.

'When he said the 8,000 will return to Mexico, went back to Mexico, he realizes they went one or two miles down the line and came into the United States because they surged so many resources to Del Rio they left 220 miles of border unguarded,' he said.

Many of the thousands who crossed the border over the last week have temporarily settled at an encampment under a bridge in Del Rio, Texas. Around 30,000 Haitians traveled to the border city in the last month, the Biden administration admitted.

Roughly 12,400 Haitian migrants are waiting to have their cases heard by immigration judges, while 5,000 are being processed by DHS and 3,000 are in detention.

On Monday morning Homan accused Mayorkas of lying again over the 12,400 figure.

'When you say 12,000 are in immigration proceedings, they are not. That's what the secretary leads you to believe,' he said.

PREV Bizarre moment Kevin Rudd urges young woman's crush to date her because she is ...
NEXT Portugal has nearly run out of people to vaccinate. What comes next? mogaznewsen 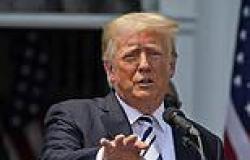 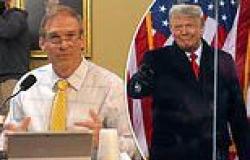 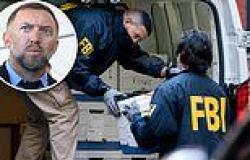 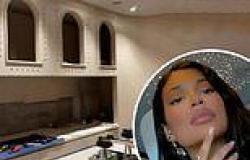 Kylie Jenner gives a behind-the-scenes look at the nursery she's building for ... 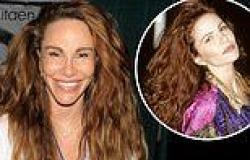