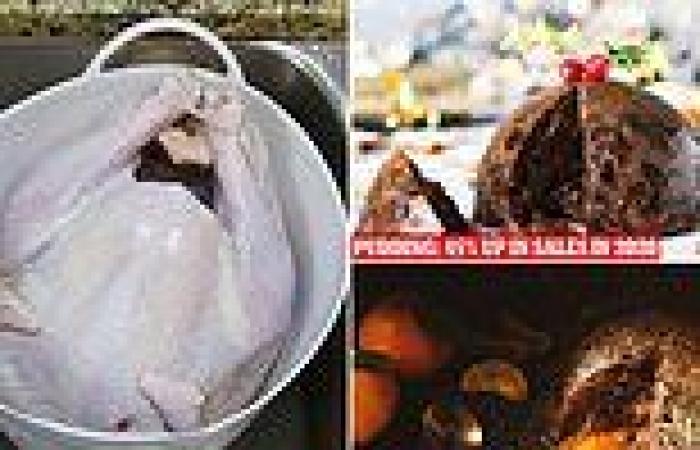 Panic-buying Britons are already stockpiling for Christmas, with budget retailer Aldi's frozen turkey crowns selling 1,500 a day and pudding sales up 45 per cent as families hoard as much as £2,000 worth of food for the winter holiday amid a supply chain crisis.

Industry experts have been warning Britons to buy their Christmas dinner in advance and even keep it in the freezer as fears mount supermarkets could run out of festive items including pigs in blankets and other party foods in the run up to December 25.

A shortage of butchers means that farmers believe have to 'throw pigs in a skip' because they can't be slaughtered and carved - with 150,000 animals under threat of being culled in the next week.

The meat crisis is compounding woes caused by a lack of HGV drivers and fuel as well as labour shortages that will lead to a 'distinct lack of choice' this year, with many essential Christmas gifts and foods scarce or missing completely in a blow to millions.

And with Cabinet Ministers shaking the hopes of millions of people by suggesting there could be empty shelves in supermarkets right up to Christmas, families are apparently taking matters into their own hands by stocking up on anything with a shelf life 'just in case'.

Staff from supermarket chain Aldi told consumer journalist Harry Wallop at a Christmas showcase that frozen turkey crowns are already 1,500 a day and pudding sales are up 45 per cent on last year. The retailer also revealed that 250,000 'Chocolate Orange bombes' have been ordered from its supplier in anticipation that the dessert is likely to be Aldi's biggest hit this Christmas.

Iceland said this week that people have already begun filling up on festive frozen food, with turkey sales up by 409 per cent compared to this time last year while the the word 'Christmas' reached over 17,000 searches across its website in the past week alone.

And Tesco executives have reportedly warned the Government that it is worried about panic-buying in the run-up to Christmas being 'far worse' than stockpiling that took place at the start of the pandemic last year, according to trade magazine The Grocer.

Desperate to ensure Christmas is normal this year after the chaos of Covid last year, single mother Pat Smith, 26, has splurged £2,000 on food already, clearing shelves at six supermarkets and grabbing 24 multipacks of crisps to her overflowing trolley rather than just one.

She told the Sun: 'I don't want to miss out. I've planned and I'm ready. I am buying what I need for the next four months including Christmas Day. Last year's lockdown hit me hard. I ran short of items and couldn't get to the shops regularly.

'When I did, the shelves were empty. As Christmas approached, I was devastated my family wouldn't have everything they needed. I couldn't get a turkey or the special ingredients I use to make the stuffing. My family's favourite drinks were either too expensive due to price hikes or not available. I ended up serving cold chicken and ham with salad.'

It comes as Ipsos Mori polling shared with MailOnline reveals panic-buying, the energy crisis, a shortage of HGV drivers and fuel are some of the biggest concerns Britons have about this winter, with 54 per cent of families worried they can't afford Christmas this year. 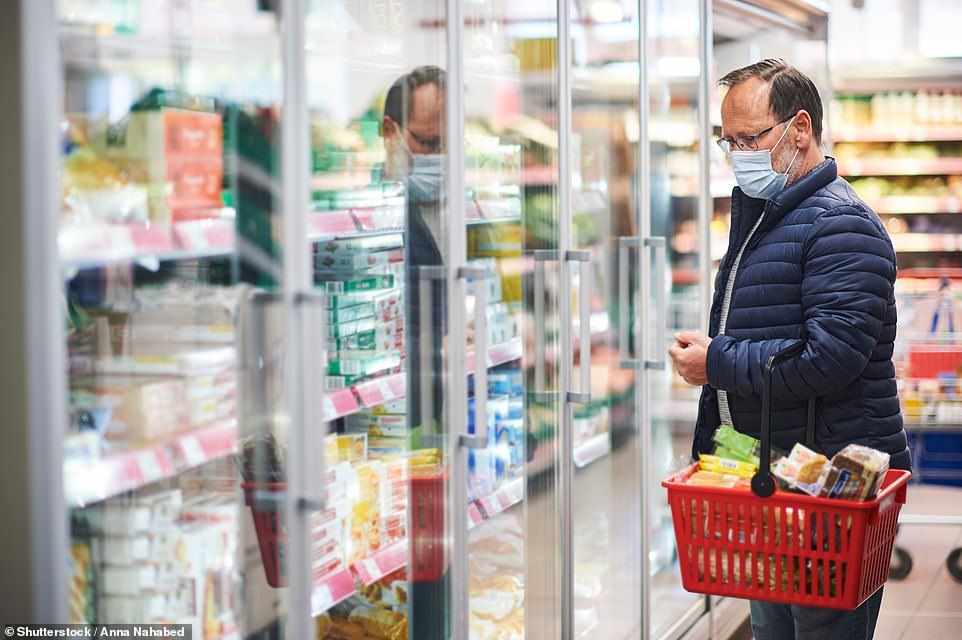 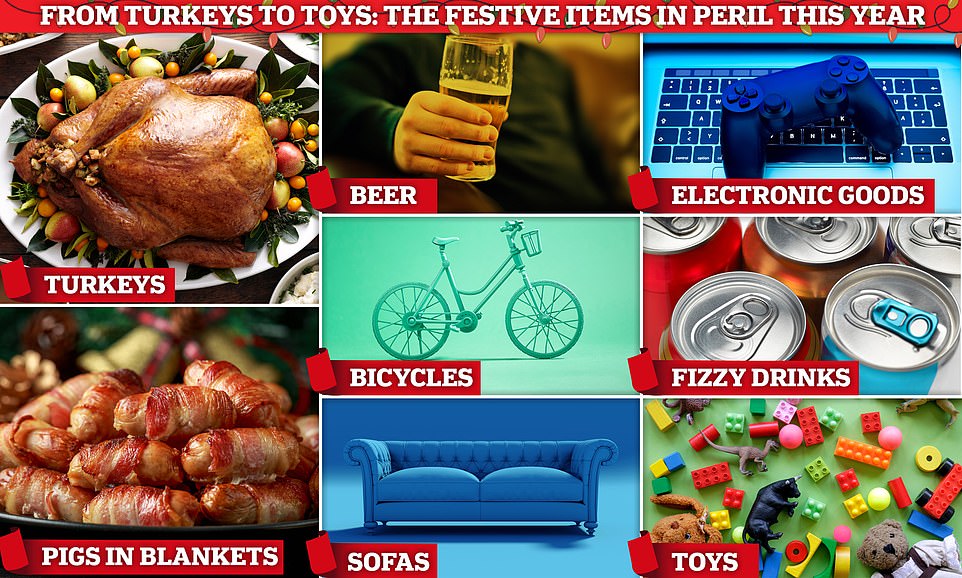 Britons were warned a 'nightmare' Christmas is looming as the growing list of items set to be in short-supply come December 25 stretched to include pigs in blankets, hams and party foods. Turkeys, drinks, toys and furniture will also be hard to get

Are YOU already stockpiling for Christmas?

Richard Harrow, chief executive of the British Frozen Food Federation, said: 'Frozen food sales grew rapidly during the pandemic and we are now seeing evidence of a growing awareness of frozen food's quality, convenience and ability to reduce food waste.'

James Withers, of Scotland Food & Drink, told the Independent that families should 'plan ahead' and freeze what they can as early as possible to avoid having missing ingredients to a traditional Christmas dinner.

'Ultimately, now I think we have just run out of time,' he warned.

'I don't think there is anything that can be done now to get the Christmas trade where it should be. That's despite warnings being sounded since the summer of the scale of the potential labour shortage we might face.'

Polling shared with MailOnline by Ipsos Mori indicates that panic is sweeping the nation, with 75 per cent of people stating panic-buying was something they were worried about affecting their Christmas negatively, closely followed by the energy crisis (70 per cent).

A lack of HGV drivers to deliver food, presents and other goods was also of serious concern (68 per cent), followed by inflation at 62 per cent. Six in ten people are also worried about the impact of the current fuel crisis, while 54 per cent of people admitted they are concerned they could catch Covid.

Bridget Williams, Ipsos Mori's research director, said: 'Despite Boris Johnson's plans to ''save Christmas'', the majority of people are currently concerned about the impact of all these crises on Christmas this year. As well as likely shortages of food, drinks and presents to buy, there are concerns about a squeeze in household incomes with rising prices, particularly amongst women and families with children.'

The Prime Minister said he is 'not worried' about the staffing shortages which have played a role in petrol pumps running dry and risk a mass pig cull and shortages this Christmas.

500 pigs have been slaughtered and hundreds more of their piglets have been euthanised as the huge cull of pigs in Britain began today with farmers blaming a shortage of butchers and HGV drivers to transport animals to abattoirs.

Boris Johnson has said the mass slaughter of pigs has 'not yet taken place' but farmers wearing 'save our bacon' T-shirts who gathered to protest outside Tory Conference in Manchester say different.

They said in the past two days hundreds of pigs have been culled by either being shot with a bolt gun or given a lethal injection by a vet and then either burnt or buried.

The National Pig Association (NPA) has revealed that members in East Anglia have told them that the mass slaughter has started because they can't get into abattoirs - with 500 pigs killed in the region - and piglets have also been euthanised because they will have nowhere to house them on backed up farms.

Chief executive Zoe Davies said: 'This is just the beginning' as she and other experts predict that between 120,000 and 150,000 animals are under threat of being culled in the next ten days.

She said: 'This is not excess supply, farmers have been contracted to grow these pigs, but the facilities are taking a quarter less than they agreed because they simply don't have the butchers. The Government has to help now because all the processors have tried very hard to recruit lately, wages have gone up exponentially over the last few months. The reality is that most people in the UK do not want to work in abattoirs and it doesn't matter how much you pay them.'

The NPA wants the Government to offer 12-month visas to EU butchers to ease the crisis - but sources close to the Prime Minister told The Times he is determined not to relax immigration rules and believes that abattoirs must increase wages and also develop new tech and better facilities to solve the crisis themselves.

Boris Johnson played down the prospect that rising inflation rates could cancel out wage growth as he pins his long-term hopes on transitioning into a high-wage high-skilled economy in the wake of Brexit.

Asked on BBC Radio 4's Today programme if there was a crisis, he said: 'No, I think that, on the contrary, what you're seeing with the UK economy, and indeed the global economy, is very largely in the supply chains the stresses and strains that you'd expect from a giant waking up, and that's what's happening.'

Labour Party chair Anneliese Dodds said Mr Johnson 'is so out of touch that he can't see a crisis when it's staring him in the face' as she highlighted teachers who could not get to school because they could not find petrol or those who will struggle after the Universal Credit cut.

'It is a crisis made in Downing Street and it's the Prime Minister's responsibility to sort it out,' the MP said.

The Prime Minister, attending the Tory party conference in Manchester, was pressed on what his plans are for staffing shortages that have hit the hospitality industry and led to farmers warning thousands of pigs will have to be incinerated because of a shortage of butchery and abattoir workers.

'There is no alternative,' he told Channel 4 News from the Midland Hotel as he reiterated plans for investment and training for workers.

It was a phrase he repeated when asked about concerns about rising inflation and interest rates during the transition into his 'new approach' after Brexit.

'We can do much, much better by becoming a higher wage, higher productivity economy. And, what I think... we've got a fantastic supply chain, fantastically clever people work on our logistics, and they will fix all these problems.'

He told BBC News 'people have been worried about

PREV Holidaymakers will need THREE Covid jabs if they want to travel abroad next year
NEXT Portugal has nearly run out of people to vaccinate. What comes next? mogaznewsen 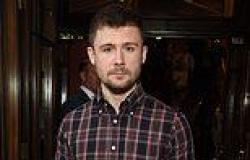 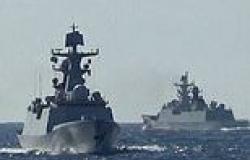 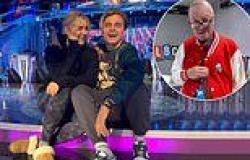 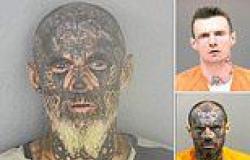