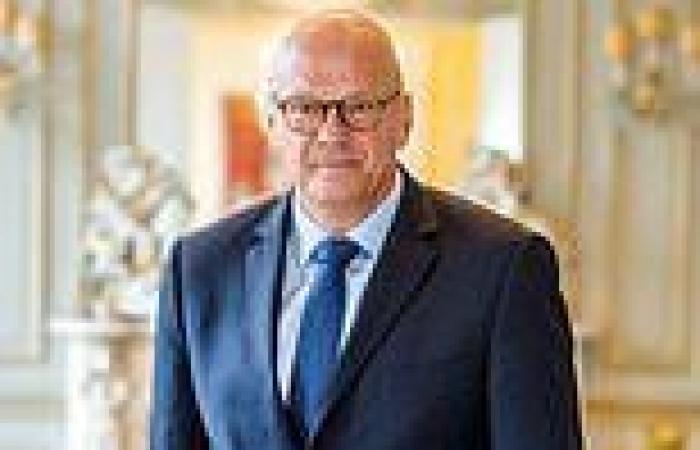 Embassy staff heading to Glasgow for the COP26 have been delayed due to the travel chaos sparked by last night's torrential downpours, a German ambassador today claimed.

Andreas Michaelis, Germany's ambassador to the UK, says embassies in London have been unable to send staff up to the climate conference due to the flooding in the north west of England.

It comes as parts of Glasgow flooded just three days before the city is due to host world leaders for the climate summit, with motorists stranded by floodwater, roads shut and drivers parking on central reservations to escape.

The Scottish city is also in the midst of a bin strike, with rubbish piling up on the streets due to a strike by refuse workers ahead of the COP26, which begins on Sunday.

Meanwhile, train services between England and Scotland have been hit with hour-long delays and cancellations today after a foot of rain fell across north west England and southern Scotland overnight.

On the west coast line, which runs through flood-hit Cumbria, rail firm Avanti West Coast are warning passengers not to travel. And on the east coast line, run by LNER, there are speed restrictions causing delays to the services.

Mr Michaelis took to Twitter to say delegates were unable to make the journey up to Glasgow this morning.

He said: 'This morning many Embassies here in London could not send their COP26 staff to Glagow.

'No trains were running "because of rain"!!! Guess we simply have to accept that nature surrounds us.'

It is not clear which embassies have been impacted by the delays, though the Candian embassy told MailOnline most of its delegates are already in Glasgow ahead of COP26.

Others have also faced delays getting to Glasgow today, with YahooNewsUK's Nadine Batchelor-Hunt saying: 'Thoughts and prayers to everyone like me who were due to travel to COP26 today but have seen their trains cancelled by biblical rain in Cumbria.' 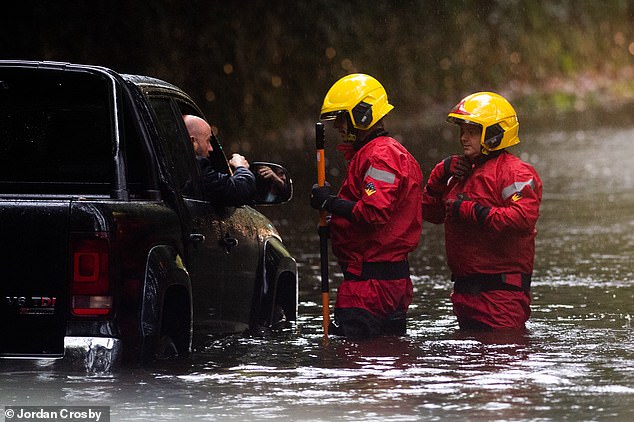 Embassy staff heading to Glasgow for the COP26 have been delayed due the travel chaos sparked by last night's torrential downpours across England and Scotland, a German ambassador today claimed. Pictured: Emergency services arrive to rescue stranded motorists on the A592 near Windermere in Cumbria today 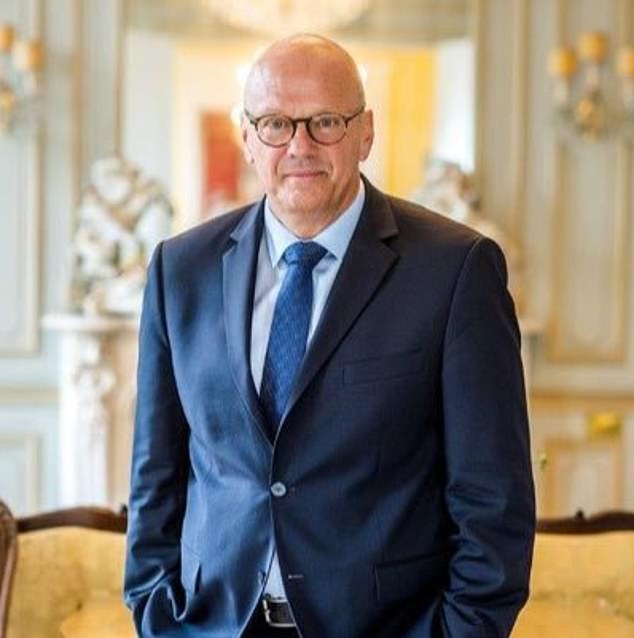 Andreas Michaelis, Germany's ambassador to the UK, claims embassies in London have been unable to send staff up to the climate conference due to the disruption 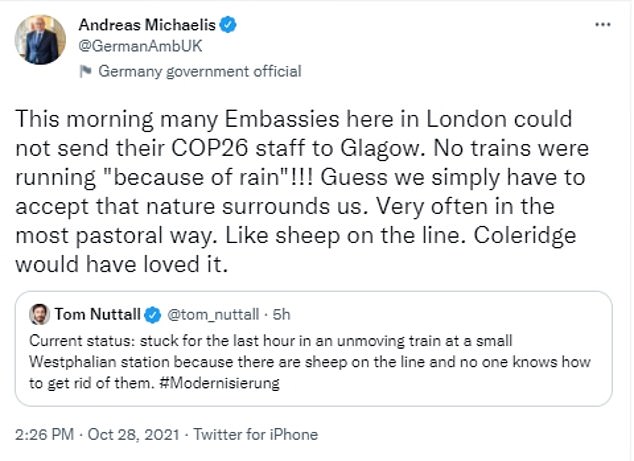 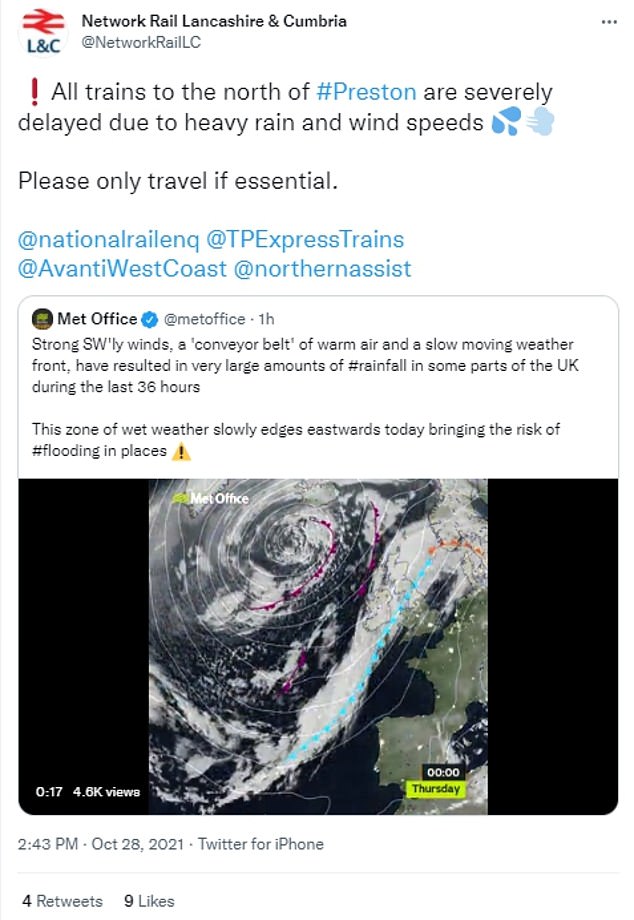 It comes as the Lake District was today hit by severe flooding today as the region was lashed by 'extreme' downpours with more than a foot of rain falling in just 33 hours - blocking roads, disrupting trains and flooding homes and buildings.

What rail firms are saying about the disruption?

A do not travel warning is in place for services north of Preston for today.

Trains on a number of routes will be running with delays of up to 50 minutes, cancellations and alterations as speed restrictions have been put in place.

TransPennine Express strongly advise that you do not travel unless your journey is absolutely essential and you should defer your journey if you can. Those making an essential journey should travel via the East Coast Mainline.

Today, services will be limited between Carlisle and Glasgow Central / Edinburgh. Customers can travel to travel to / from Scotland on the East Coast Main Line travelling via Newcastle and York to / from Manchester.

Customers are advised not to travel between these stations.

Disruption is expected until the end of the day

Honister Pass in Cumbria has seen an extraordinary 335mm (13in) of rain fall in just 33 hours - well over a month's worth - after the Met Office warned of life-threatening floods in the region popular with holidaymakers.

Cumbria Police urged everyone in the county - including thousands of families on their half-term break - to only travel if necessary, with some roads having been flooded, including the A591 between Rydal and Grasmere.

Flooding also affected the A595 at Duddon Bridge and the A592 Patterdale Road, while Avanti West Coast advised its train passengers not to travel from stations in the North West of England and Scotland before tomorrow.

Kendal was among the tourist hotspots affected by the rising water levels today with the River Kent looking very swollen, while the clubhouse at Keswick Rugby Club was completely flooded as nearby roads turned into rivers.

The River Rothay burst its banks, the Windermere ferry was suspended and there was flooding on the road into Borrowdale. After Honister Pass, the next wettest place in Cumbria was Seathwaite with 273mm (11in) of rain.

Meanwhile, residents in Glasgow, which is hosting the COP26 climate change event from Sunday, have also suffered in recent weeks from overflowing rubbish and gutters filling with litter as once-fortnightly bin collections were pushed back.

A 'danger to life' amber weather warning which began yesterday remained in place for South West Scotland until this morning today, as well as another in Cumbria, much of Wales and Lancashire until midnight tonight.

Sepa warned: 'Heavy and persistent rain across southern Scotland overnight into Thursday is likely to lead to river and surface water flooding in eastern Dumfries and Galloway and western Scottish Borders – expect flooding.' 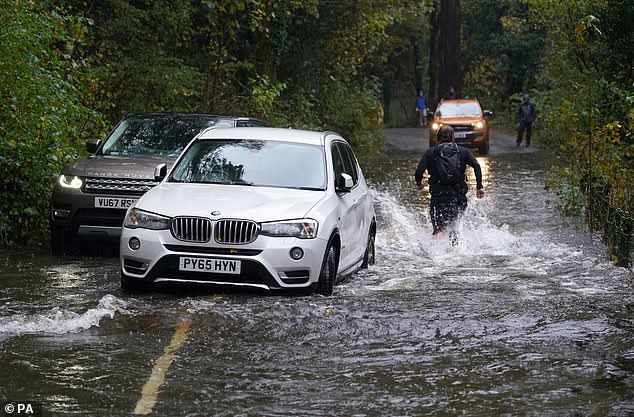 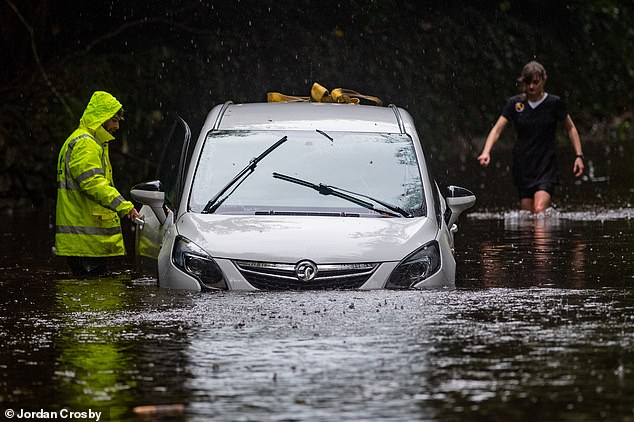 Heavy rain continues to cause disruption in parts of the Lake District today, including on the A592 near Windermere 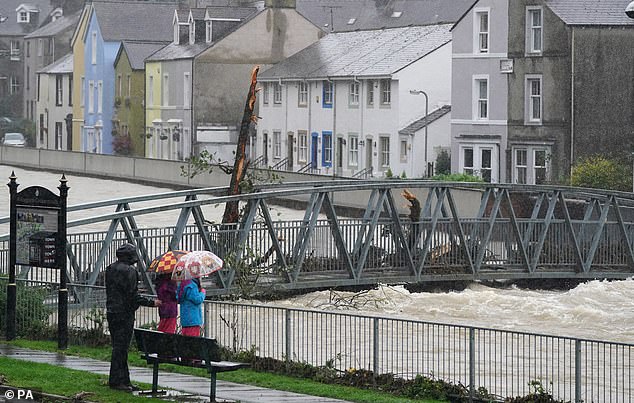 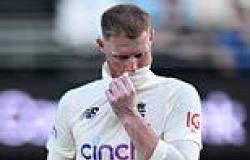 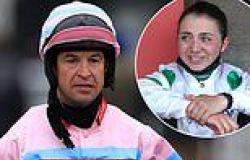 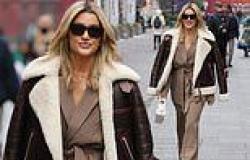 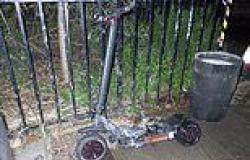