Prepare for 'stay at home December': Businesses allow WFH until 2022 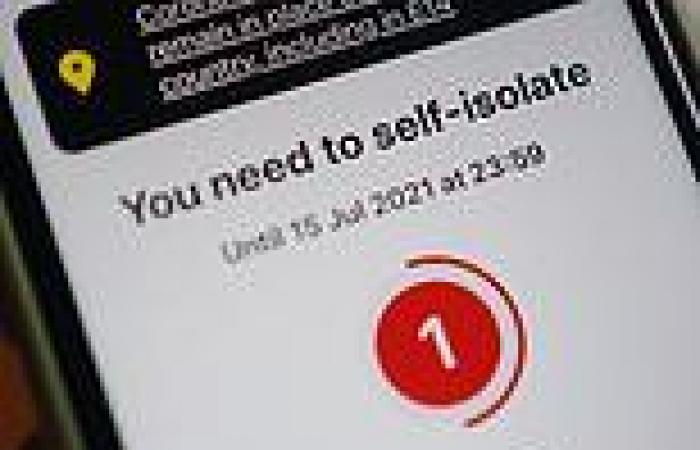 Big businesses have told staff they can avoid the office through December because of the Omicron strain of Covid-19 as the Government was accused of scaring people into working from home and SAGE scientists called for all UK arrivals to be forced to quarantine for five days and take a pre-departure PCR test even if they are vaccinated.

Christmas parties are also being axed - costing pubs and clubs billions of pounds - and if the parties are still going ahead attendees are being told by their bosses to take a lateral flow test on the morning of the event and wear masks. Schools cancelled nativity plays, fairs and councils axed Santa visits for vulnerable children.

With almost four weeks until Christmas, staff are already being allowed to work from home full time despite Boris Johnson's insistence there was no need to call off Christmas events or for companies to send staff home to avoid a Christmas lockdown.

Critics say the Government's latest coronavirus rules on masks, blanket quarantine for Omicron contacts and gloomy language about the threat of the new variant is actually encouraging a semi-lockdown by stealth.

Mr Johnson announced at the weekend that face coverings had to be worn in shops and on public transport from yesterday - though not in hospitality venues - and insisted there was no need for companies to send staff home to avoid a Christmas lockdown.

But there was chaos yesterday after UK Health Security Agency (UKHSA) chief Dr Jenny Harries said people should limit socialising to slow the spread of the variant. This sparked suspicion among Tory MPs that she was being set up as the fall guy by ministers who are too scared to admit further restrictions are likely.

Brewin Dolphin, one of the largest British wealth management firms in the UK, has told staff in London they can stay away from the office from December 10 until January 7, MailOnline can reveal today. Staff should not 'feel uncomfortable declining' invites to events before December 25, bosses have said.

Google has emailed UK staff urging them to 'move any planned in-person social gatherings until 2022'. Ronan Harris, Vice President and MD for Google UK & Ireland also told workers that business meetings and events must be approved by a company director.

And despite Government guidance saying otherwise, many UK companies employing hundreds of thousands of staff have scrambled to reinstate office restrictions including mask wearing in communal areas such as corridors and lifts.

Pubs and clubs have reported a slew of cancellations as hospitality businesses lined up to warn the Prime Minister that the chilling effect of Covid restrictions will cost the economy 'billions' in the run-up to Christmas.

And there was even more confusion today after Health Secretary Sajid Javid encouraged millions of people to be 'sensible' and 'cautious' and take a lateral flow test before going to Christmas events to slow the spread of the Omicron variant.

Tory MP Sir Christopher Chope has claimed the Prime Minister's regulations, which are enshrined in law until March, are 'part of a scaremongering propaganda campaign that is really designed to restrict or stop interaction between social animals. They're designed to suppress freedom of the individual and suppress social contact, and they're doing that through unreasonable fear-mongering.'

Alec Shelbrooke, Conservative MP for Elmet and Rothwell, said: 'I have received several emails from travel companies in my constituency whose potential bookings have dropped off a cliff because of the cost of PCR tests', adding encouragement back towards working from home will be devastating for businesses relying on office workers.

The row over the new covid regulations, enshrined in law until March, came as:

Joe Biden is considering tougher entry requirements for travellers going to the US in a move which could include forcing arrivals to quarantine for seven days. European Commission President Ursula von der Leyen said it is time for the EU 'to think about' making Covid vaccines mandatory across the entire bloc. Mr Javid admitted it will be a 'huge ask' to deliver on the Government's booster drive pledge of offering a jab to every UK adult by the end of January.  Labour urged the Government to introduce pre-departure testing for all people before they fly to the UK.   Saffron Cordery, deputy chief executive of NHS Providers, which represents NHS trusts, said some NHS organisations had asked staff 'not to mix in big groups' in the run-up to Christmas.  Data published by the Office for National Statistics showed a total of 170,816 deaths have occurred in the UK where Covid-19 was mentioned on the death certificate. 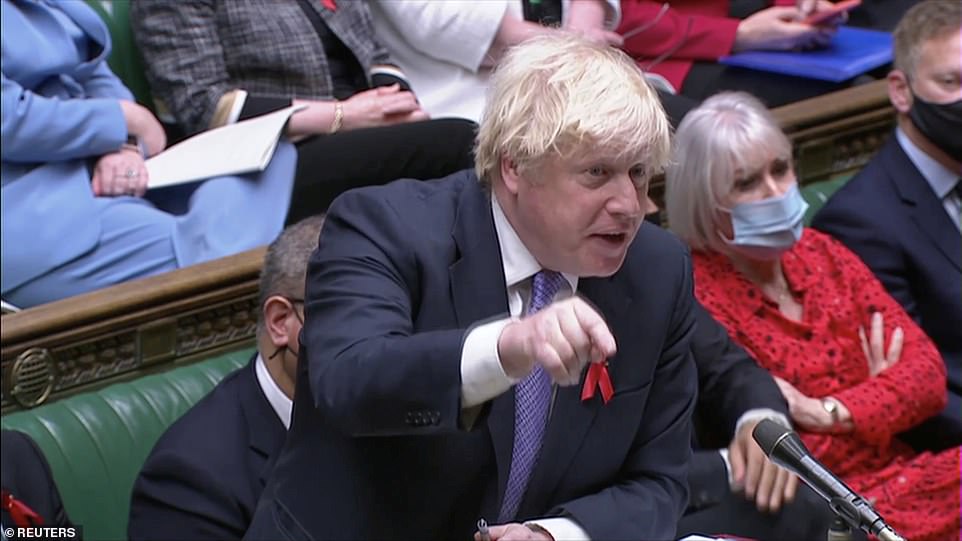 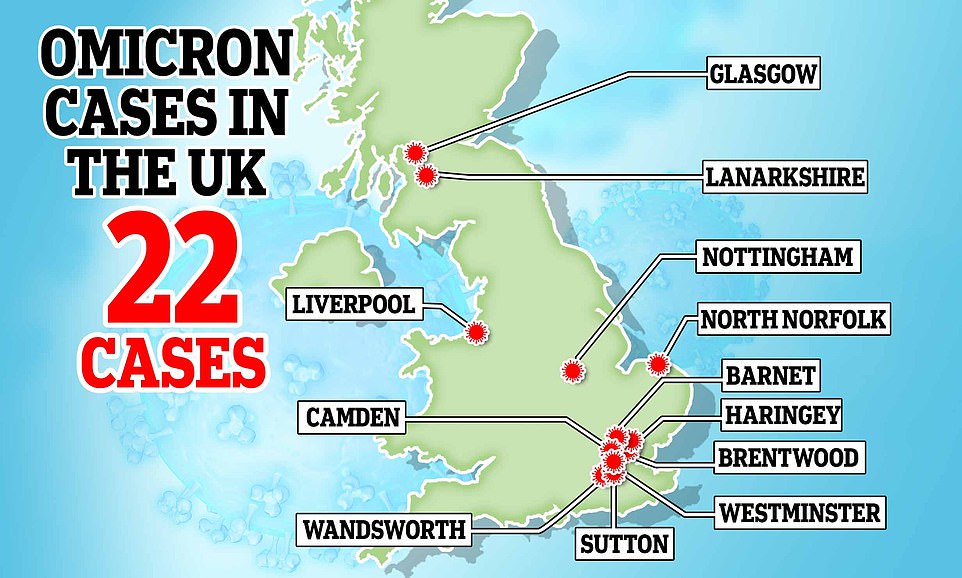 All UK arrivals should be forced to quarantine for five days and take a pre-departure PCR test even if they are vaccinated, SAGE has advised.

The expert panel warned the current travel curbs were allowing 'significant' numbers of infected people to slip through the cracks.

Currently, fully vaccinated people coming into the UK need to take a PCR test within the first two days of returning to the UK.

There is nothing stopping them taking this as soon as they land and getting a result on the same day, releasing them from isolation in hours.

SAGE scientists said this might not give enough time for the virus to incubate. They also called for ministers to bring in day five and day eight tests.

Only unvaccinated people coming into the UK have to take 'fit to fly' tests before getting on a plane back to Britain.

SAGE's new advice was leaked from minutes of an emergency meeting about the new Omicron variant held on Monday.

They also said Britain should brace for a 'potentially very significant wave with associated hospitalisations' this winter if the worst estimates about Omicron turn out to be true.

Boris Johnson tightened travel rules yesterday to require arrivals to self-isolate until they get a negative PCR test result.

But shadow home secretary Yvette Cooper today said it was 'totally unacceptable' that ministers were failing to heed advice from their own scientists to impose more curbs at the border.

The Government rejected calls for up to eight-day self-isolation for vaccinated arrivals this week, arguing it would have a 'detrimental' impact on the travel industry.

Businesses have lined up to warn Boris Johnson that the chilling effect of Covid restrictions will cost the economy 'billions' in the run-up to Christmas.

Pubs and restaurants said people were already cancelling Christmas parties even though there is no requirement to wear masks in hospitality venues. Theatres have also started asking visitors to wear masks.

Airline bosses warned that restrictive new testing requirements since the emergence of the latest strain was putting put the industry's fragile recovery at risk. Bookings have weakened and fears are rising that carriers could see a wave of cancellations.

'It is surreal and extremely frustrating to see healthcare advisers publicly telling people not to socialise, giving unnecessary uncertainty to our customers and workforce,' he said.

He added: 'At the very moment operating costs are at their highest, we are now faced with another poorly conceived communications strategy from Government which has and will severely impact businesses,' he said.

'Christmas bookings and advance ticket sales have already been hit following the announcement of the new Omicron variant.' Former minister Steve Baker condemned the intervention from Dr Harries, saying: 'Loneliness shortens lives... and yet we find an official going beyond Government policy to say that we should not have unnecessary socialising.' Fellow Tory Sir Desmond Swayne said telling people not to socialise would be 'to the huge detriment of people's wellbeing and industries struggling to recover from earlier lockdowns.'

Tory MPs have blasted the Government after it emerged new rules on self-isolation will be enshrined in law until March, sparking fears the curbs could remain in place far beyond a promised three week review. 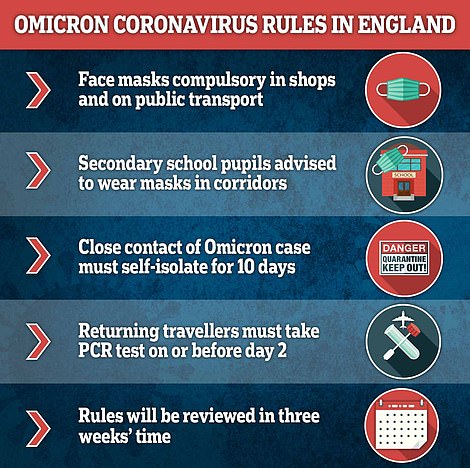 A new restriction came into force yesterday which requires people who have been in contact with a case of the Omicron coronavirus variant to self-isolate for 10 days or risk a fine of up to £10,000.

Boris Johnson has said that rule, along with requirements to wear face masks in shops and on public transport and for returning travellers to take a PCR test on or before day two after arrival, will be reviewed before Christmas.

But the regulations underpinning the self-isolation rule are not due to expire until March 24, prompting a backlash from anti-lockdown Tories.

Conservative MPs have expressed concerns that the new rule could cause a fresh 'pingdemic' which could devastate the economy and education system.

But Health Secretary Sajid Javid today dismissed those concerns as he said the current number of Omicron cases is still 'very low' with 22 confirmed cases across the UK.

Mr Johnson rejected the advice of Dr Jenny Harries, pointing out it is not included in formal guidance, as he told people they do not need to cancel Christmas parties or school nativity plays.

Mr Javid echoed the PM's position this morning as he said people 'should continue to behave in the way that they were planning to behave over Christmas' and 'I don't think there is any need to change those plans'.

However, the Health Secretary risked further confusion after he said he would take a Covid test before attending a Christmas party.

He said that testing before a party is 'not a formal recommendation in the guidance' but he would take a test if he was attending such an event as a 'sensible precaution'.

It came as Mr Johnson was grilled by Sir Keir Starmer at PMQs over claims that the Prime Minister and his Downing Street staff broke Covid rules by holding two festive gatherings in Number 10 in 2020.

The Daily Mirror reported that the PM gave a speech at a packed leaving do for a senior aide last November when the country was in the midst of the second lockdown. Members of his Number 10 team apparently then held their own festive party days before Christmas, while London was subject to Tier 3 Covid restrictions. 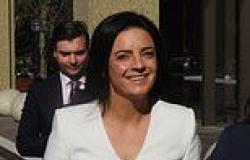 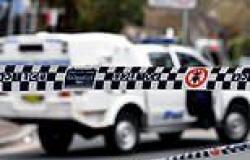 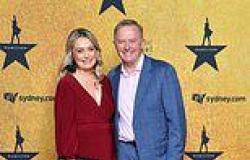 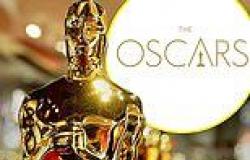