New York state 'turning the corner' on COVID as infections and hospitalizations ... 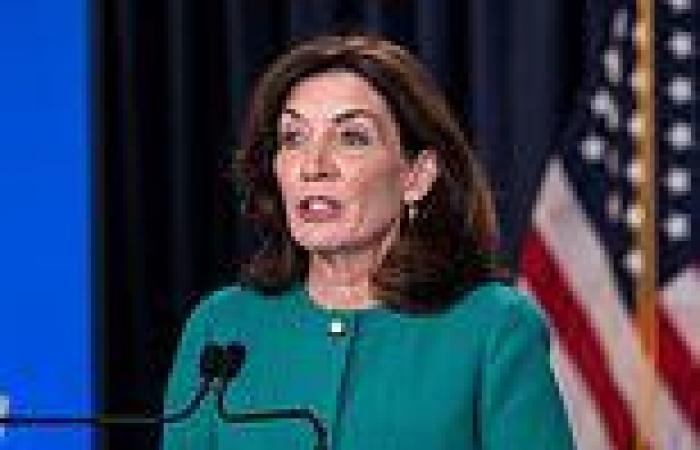 New York's Governor Kathy Hochul has said the state is 'turning the corner' in the fight against the coronavirus with the numbers of those still in hospital starting to decline.

The Omicron surge finally appears to be on the wave in the state with the number of people still in hospital at 12,207 having dropped for the previous three days.

The spike in cases also now seems to be trending down with 49,027 new infections recorded on Thursday. One week earlier they were at a record high of 90,000. 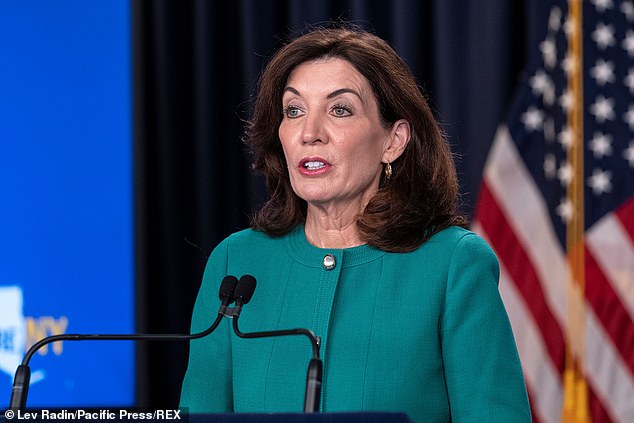 New York Governor Kathy Hochul says the state is 'turning the corner' on the omicron-fueled winter surge as COVID cases, hospitalizations and state's positivity rate fell for the first time in weeks

Governor Hochul touted the decline of the state's seven-day average of new cases which peaked last week over 90,000 and fell to below 50,000 on Friday

'Turning the corner, you heard it here first. I've been waiting to say it: turning a corner,' Hochul said during a briefing at at University of Albany's RNA Institute. 'Our highest point was a week ago. Highest to lowest in a week thus far and that lowest is going to continue to go down.'

Nevertheless, Gov. Hochul warned 'this is no time to spike the football despite the long awaited, much anticipated decline' in hospitalizations and infections across New York state.

'We still need to remain vigilant,' she said during a press briefing in at the State Capital, Albany. 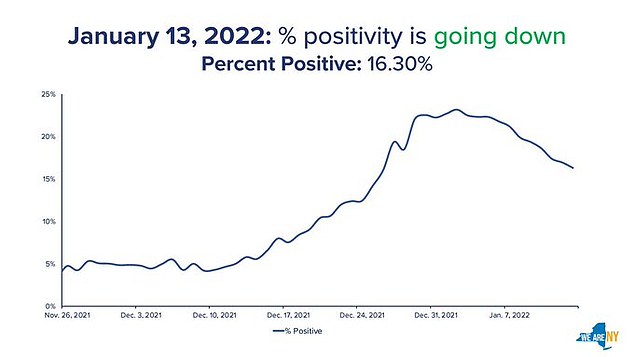 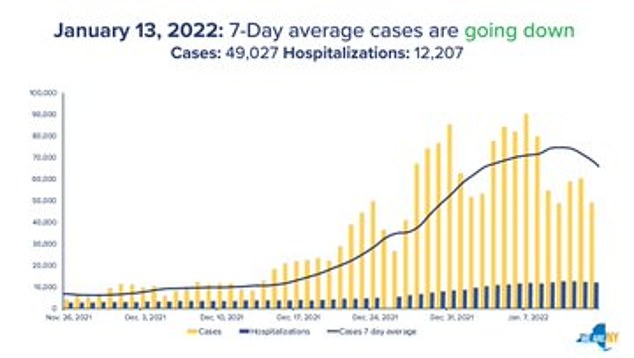 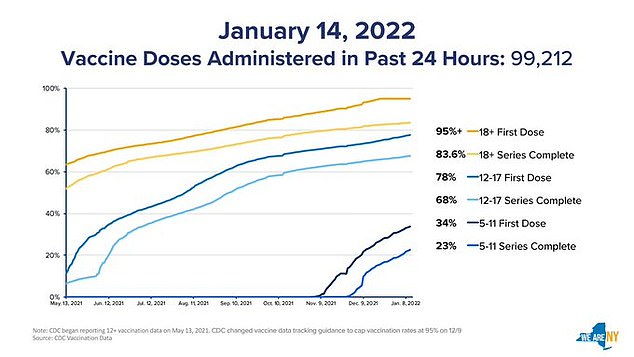 'Let's continue to use the tools we know will help stop the spread and keep ourselves safe: get the vaccine, get the booster, wear a mask, and stay home if you're feeling sick.

'There will come a time when it is all over. We are not there yet. But boy, it is on the horizon, and we've waited a long time for that.'

On Thursday, 195 deaths were recorded which was up slightly from 177 recorded on Wednesday.

More than 62,800 New Yorkers have died from COVID during the pandemic.

Hocul said that the death rate in the state would soon start to trend downwards as it typically lags behind the numbers of infections and those in hospital.

Hochul stressed that she was keen to remove the indoor mask mandate when it became clear the Omicron variant no longer posed a threat. 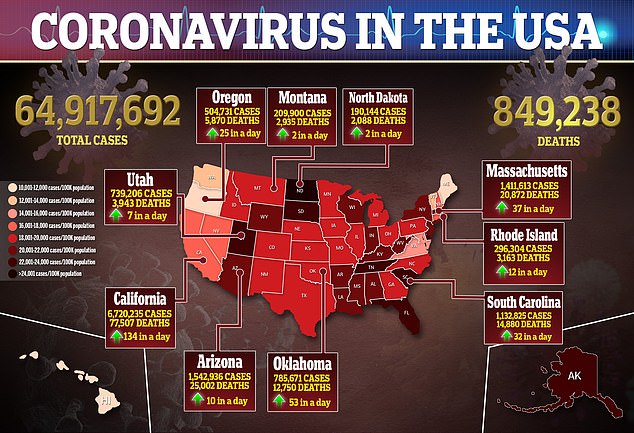 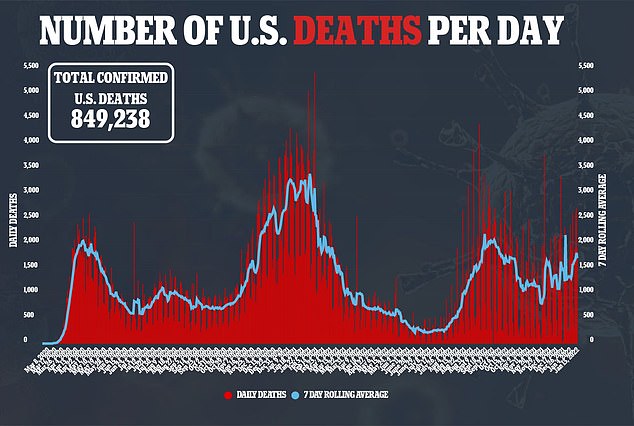 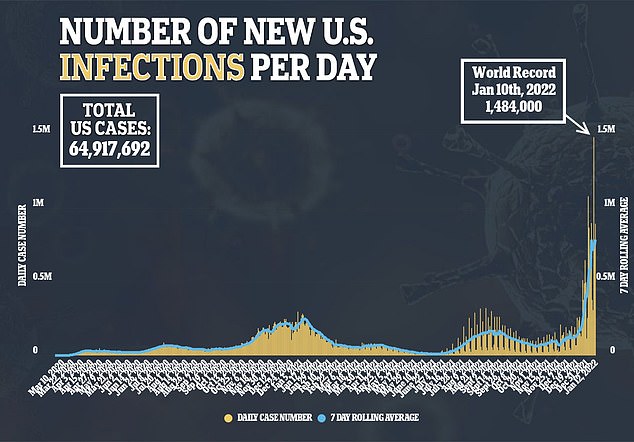 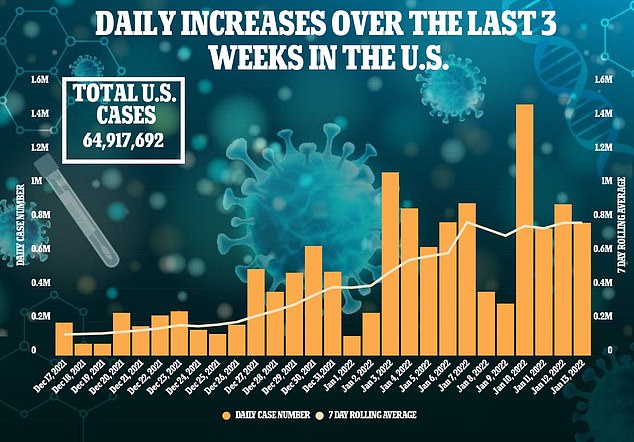 She also described the mask mandate as a 'short term' necessity noting that she wanted to 'make people feel liberated' as soon as possible.

'I don't have the knowledge right now of what's going to happen on February 1, referring to the current indoor mask mandate,' Gov. Hochul said. 'we're going to monitor the situation and make sure there's not a trend that changes things quickly.'

The state has secured an additional 64 million COVID tests that will be distributed to schools, nursing homes and other sites.

Since the variant was detected in November, WHO data shows it has spread quickly and emerged in at least 128 countries, presenting dilemmas for nations across the globe, as well as people seeking to revive their savings accounts - and lives - after nearly two years of COVID-related lockdowns

PREV Don Jr. gets a huge hug from dad Donald on NYE for his birthday at Mar-a-Lago
NEXT Social media blames People Magazine for jinxing Betty White with profile ahead ... 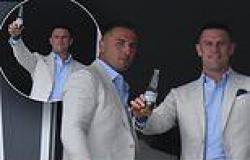 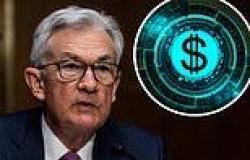 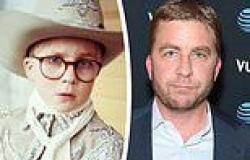 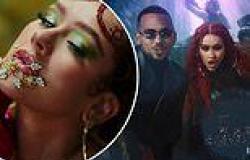