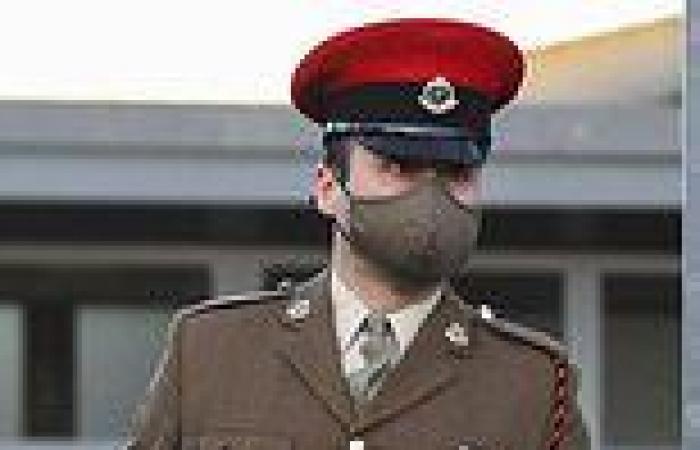 A Royal Military Police officer wept in court today as he was convicted of sexually assaulting a female soldier by putting his penis on her shoulder, a court martial heard.

Corporal Edward Gadd had asked the woman to have sex and, after she refused, he tried to 'bargain' with her to carry out other sex acts at Pirbright Army Training Centre in Woking, Surrey.

The woman told the court that after turning down his suggestions, she saw Cpl Gadd's penis out of the corner of her eye as he touched her shoulder with it before trying to get her to rub it.

The woman also accused Cpl Gadd of groping her breast and slapping her bottom but he was found not guilty of sexual assault on these two charges.

Bulford Military Court, Wiltshire, heard the woman rejected his sexual advances before he started 'bargaining' with her by offering her peace and quiet for sex.

The court heard he would have left her alone for four weeks if they had 'full sex' or for three weeks if she gave him oral sex.

She again refused his advances, but he took out his penis and placed it on her shoulder when she was not looking, the court later heard.

Cpl Gadd denied assaulting her and said that although he asked for sex, when she said no 'that was the end of it.'

Corporal Edward Gadd (pictured), of the Army Training Centre Pirbright in Woking, Surrey, had asked the woman to have sex and after she refused he tried to 'bargain' with her to carry out other sex acts

Cpl Gadd, who enjoyed a 10-year career with the Royal Military Police and earned an operational service medal for his role during the Afghanistan War, will now be sentenced for one count of sexual assault at a hearing in February.

The trial had heard Cpl Gadd and the woman were known to one another at the time and that day he was at her home while she did her make up as he was going to take her dogs for a walk.

Wednesday 18 May 2022 08:58 PM Sofia Richie looks chic in long coat as she heads to Beverly Hills dinner with ... trends now