ASMR -- short for autonomous sensory meridian response -- is a physical sensation that has dominated a corner of the internet for the best part of a decade. It has a dedicated following, with more than 14 million monthly searches on YouTube, and has launched entire careers, where digital creators ever so gently release ASMR-inducing content -- soap-cutting, slime-kneading and whispered role play all fall under the perplexing genre -- in the hopes of gaining loyal viewers.

Usually experienced alone, in a bedroom or somewhere private (some have admitted to feeling an irrational "shame" when engaging in ASMR viewing), the rise of ASMR has been linked with our increasingly isolating digital age.

The exhibition at the Design Museum in London hopes to legitimize the often clandestine practice of ASMR. Credit: Ed Reeve

Now, a new exhibition, "Weird Sensation Feels Good: The World of ASMR,'" at the Design Museum in London seeks to take this very private and digital practice into a public and physical space.

The exhibition space features an array of prompts, from visual cues and audio clips to interactive installations that combine sound with touch, each with aim of kickstarting a physical sensation in visitors.

As someone who has never before sought out ASMR videos, or felt particularly affected when the algorithm sent them my way anyway, my expectations of an immersive exhibition dedicated to triggering this elusive bodily sensation were low. A printed visitor guide containing several disclaimers, including a warning that "it is possible to feel nothing at all" due to ASMR being "highly individual" fed my suspicion that I would leave the event cold. But I didn't.

An interactive installation at the exhibition encouraged users to create their own ASMR-triggering sounds. Credit: Ed Reeve

It felt like ASMR tapas -- small bite sized introductions into different neurological activations until you found one you wanted to feast on. The abstract motion graphics, for example, though hypnotic in their infinite movements (one screen displayed an endless object being sliced apart over and over à la a Play-Doh Fun Factory machine) didn't entertain me, let alone send my brain into a deep calm.

Dusting a microphone with a toolkit of fluffy brushes while listening to the playback, as one interactive installation instructed I do, did make me laugh -- but only because I couldn't imagine who would have such a visceral reaction to something so mundane.

And then I entered the cerebral-looking conversation pit at the room's center: an entirely off-white carpeted lounging area made from concertinaed tubular cushions that, when lying down, seem to arch well over your head. There I stood motionless, enthralled by a video of a South Korean dog groomer meticulously beautifying a white poodle. It pacified me completely: the sound of the water running as the pup was being shampooed in a cavernous chrome sink, the soft blowing noise of the hairdryer on his coat, the delicate snipping of the crescent-shaped scissors; sculpting this animal's fur like topiary. I can't remember how long I stood there, only that it was until the video ended and a stranger came up and commented on my visible fascination.

The padded ASMR arena was built to mimic the privacy and comfort of a bedroom space. Credit: Ed Reeve

"It's a little bit like you're in amniotic fluid, isn't it?" said curator James Taylor-Foster outside the brain-pit. "Our main goal," explained the architect behind the show's design Dagnija Smilga, "was to create a public space where you feel safe, protected and calm. Therefore we used this round shape and these arms that are kind of hugging you."

The curved pit includes a handful of nooks and crannies where visitors can sink into undisturbed. "Half of the works in the arena, you can watch on YouTube," said Taylor-Foster. "So this exhibition is doing something else. It's inviting you to understand these works in a different context, in a shared setting. And to understand it as part of a series of wider discourses."

'슈앤트리 SHU AND TREE,' the Korean dog groomers responsible for my meditative state, have over 1.7 million YouTube subscribers. Nowhere on their profile does it mention they are ASMR creators, but their video unearthed a reaction in me. It's a form of "unintentional ASMR" said Taylor-Foster, a subsection of the phenomenon that well precedes the current YouTube hype. The late Bob Ross -- another featured artist in the exhibition -- is a pivotal example of unintentional ASMR, according to Taylor-Foster, for all his softly-spoken encouragement and the sound of paintbrush bristles on canvas. Similarly, if you've ever fallen asleep to the BBC shipping forecast, you may be into ASMR. And all this to say if you are, there's no shame, assures Taylor-Foster.

"The point of making an exhibition about it is to say, 'No, it's not weird. Not in a negative sense,'" he said. "It's actually a part of the fabric of our lives. And by [putting on an exhibition] in a museum, we're

PREV Gallery: The best photos from around the world mogaznewsen
NEXT Sunday 26 June 2022 10:18 AM Man City ace Phil Foden has beach bust-up with Rebecca Cooke 'after she looked ... trends now

For these two Disney fans, crossing paths with their future spouse at their ...

Sam Gilliam, the first Black artist to represent the US pavilion at the Venice ...

Western leaders gathering at the G7 have decided to try capping the price of ...

The first official joint portrait of the Duke and Duchess of Cambridge has been ...

The killing of Emmett Till mogaznewsen 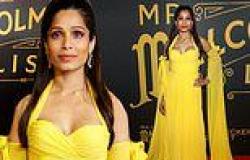