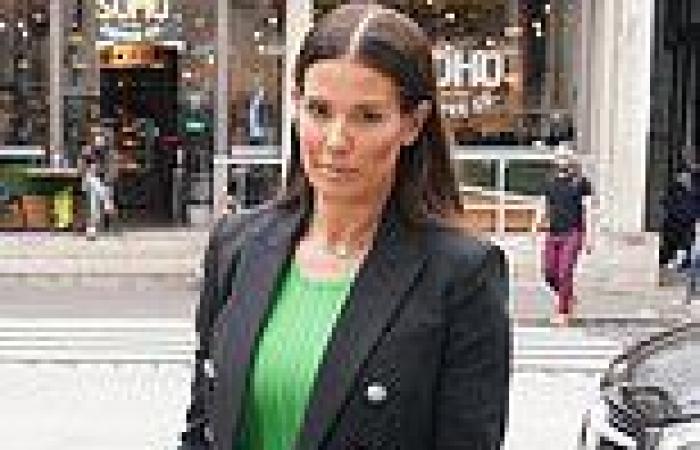 After an estimated £3million in legal fees, tens of thousands of pounds worth of designer finery, a lot of tears (sorry Rebekah), some appalling language, a nation divided into #teamrooney and #teamvardy and a truly astonishing insight into the mad, bad, wonderful world of Wags, here we are in the final moments of the great Wagatha Christie trial.

And my goodness have we learned a lot.

That Rebekah Vardy is tough as old boots, but can still be reduced to tears (again and again). That Wayne badly needs to go up a clothes size. That poor Peter Andre has every reason to feel a bit miffed right now. Oh yes, and that arguing with Coleen is like arguing with a pigeon, because ‘you’ll always get s*** in your hair’.

So perhaps it’s not surprising that the barristers’ final submissions are a bit of an anti-climax. For starters, the Rooneys have gone – thousands of miles away on holiday, naturally. (Coleen’s no doubt trying to slough off the grub of the Royal Courts of Justice in the Caribbean Sea as we speak.)

Jamie’s not here either (shock). Which leaves just Rebekah to add a pop of colour to the front bench in her green top.

Behind her, Hugh Tomlinson QC looks tired and crumpled while mahogany David Dickinson (sorry, Sherborne) bounces up and down like a schoolboy at prize-giving, poised for the glory moment.

But sadly, he’ll have to wait. There’ll be no judgment today, or any day soon. Which is a shame but, after all this Wagtastic folly, you can hardly blame Mrs Justice Steyn for needing a gentle lie-down for a week or ten in a darkened room.

Of course, it could be that she’s taking her time and being particularly thorough to ensure that this case can never, ever boomerang back to the Court on appeal.

Either way, she’s not playing ball; her judgment is reserved and so, as the final whistle blows and the teams retreat for their post-match debrief in their aromatherapy spa baths, here is my final commentary on the winners (no one), losers (everyone but the lawyers), red cards, fouls and goals in the inaugural World Cup of Wags. 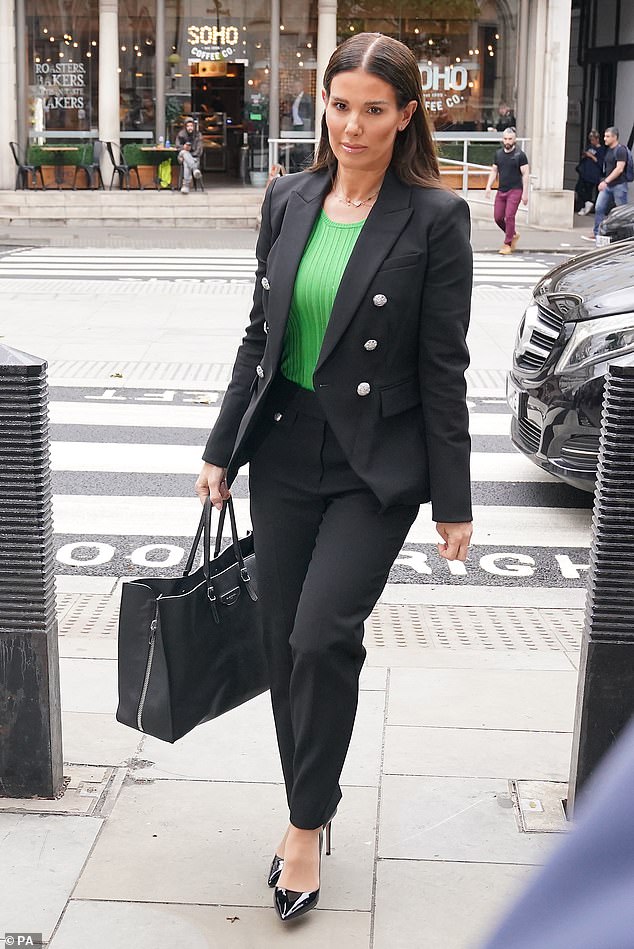 Arriving yesterday at the Royal Courts of Justice, Rebekah Vardy wore a black suit with a green top at the final day of her high-profile libel trial battle against fellow WAG Coleen Rooney

While Coleen can somehow make an air-cast boot look stylish, complemented by a single Gucci loafer on the other tiny foot and that trusty £3,000 cross-body Chanel, when it comes to classic Wag style, Rebekah left the more experienced player in the dust.

That amazing Alessandra Rich, £2,095 lemon-meringue suit! The countless bags, the towering heels. The tropical tan, the fantastic bosom. The designer glasses aplenty and the ever-changing hairdos.

Sorry, Coleen, you’re very pretty, much smaller than we expected and have superlative cheekbones, but who wants to see a high street suit when they’re watching a Championship battle of the Wags?

A tale of two (other) halves

A tricky one, this. Who’s best, Jamie or Wayne? Granted, Wayne sat there, stolid and steadfast, through what felt like a 1,000-hour Wagathon, with neither substitution nor injury time. He didn’t even dart off for an emergency loo break.

But then – shock horror - it emerged that pretty much every detail of this farce was brand new to him.

We learned he had no prior knowledge of the big reveal planned by his wife of 14 years. No idea of the extent of her brilliance or the Poirot-style sting she was planning. Barely any idea, even, who Wagatha Christie was! Because despite the headlines, ballooning legal bills and a partner who was clearly suffering, so wrapped up was he in his own life that he hadn’t bothered to ask.

Jamie, meanwhile, didn’t even show up until day six and, even then, stormed out in a strop before end of play.

But despite all that, he and Bex seemed more than a team. Nay, they were one and the same: cemented together, arms entwined throughout the hearing, forever nudging, elbowing and whispering in one another’s eager ears.

They clearly discuss everything – and I mean everything. From Danny Drinkwater’s drink-driving issues to which Premier star was doing the dirty.

We heard the couple spent so much time FaceTiming during the 2016 Euros that it seemed Rebekah was practically part of the team. As Jamie himself confirmed this week, ‘I discuss everything with Becky.’

It was a dirty match and there were a lot of yellows. Most belong to Rebekah for her endless foul-languaged exchanges with her former PR manager, Caroline Watt, in which she calls Coleen a wide variety of unattractive four- and five-letter words, none of which we can print here.

Skills in the box

The unexpected man of the match must surely lie with Wayne’s promotion off the bench to make his evidential debut.

He’s always been good in the box but, bloody hell, wasn’t he just brilliant? With his clear, scouse tenor and surprising grace and elegance. Magnificent. A natural – pulling something out of the bag that will have pundits talking for years.

Coleen gets a highly commended for her sure-footed handing of Tomlinson’s forensic cross-examination.

And perhaps the less said about Rebekah’s performance, the better.

Just for a minute, let’s put aside David Sherborne’s ridiculous tan, bouffant hair and deep fondness for himself. Because the Barrister to the Stars has played a total blinder in defence. Rock solid, stylish, resolute – he never once dropped his guard. 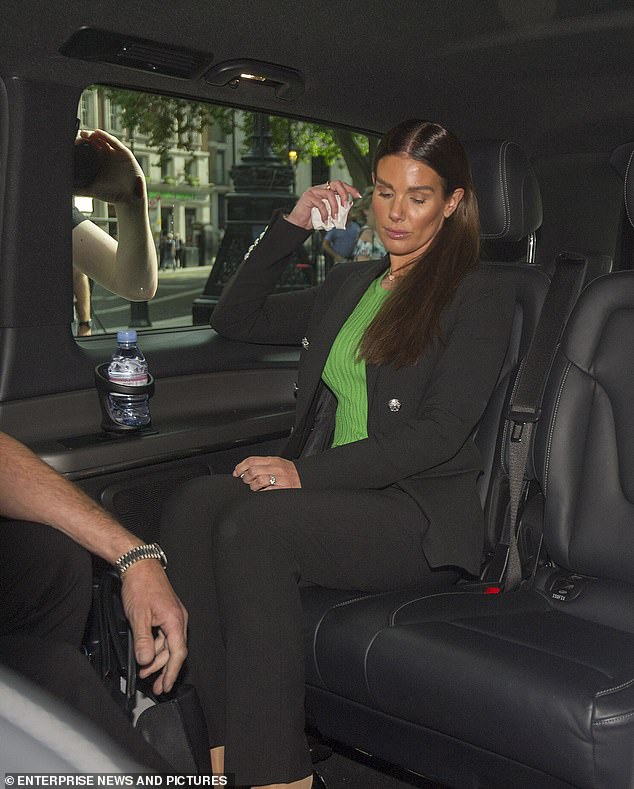 Pictured leaving the High Court at the end of the final day of the Wagatha Christie trial, Rebekah looked downtrodden as she held a tissue in the car on her way home

Interaction with the crowd

Wayne also takes this one with ease. For all his catatonia while court was in session, during the breaks he was variously holding open doors, signing autographs and posing for selfies like the true record goal-scoring star he is.

Jamie, meanwhile, barks ‘not in court’ when asked for his autograph.

Bex had this one covered, perhaps even setting the world record for the number of own goals ever scored at one tournament. Of course, there were the vile WhatsApp messages that lurched up from the past to reveal her inner workings. But most of all, how could we forget that, when all is said and done, she was the one who started this fight and, surely against all advice, refused and refused and refused to back down.

One for each Vardy. For 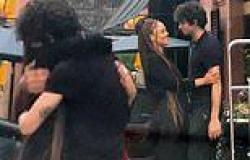 Thursday 30 June 2022 08:12 PM Tessa Thompson seen checking out of NYC hotel as she gets help from pal loading ... trends now 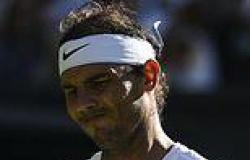 sport news Rafael Nadal marches into third round of Wimbledon with four-set victory over ... trends now 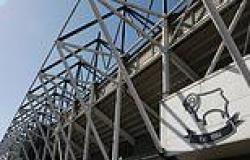 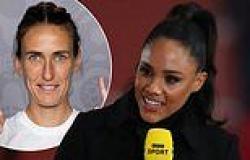 sport news The England team that reached the final of the 2009 Women's Euros - where are ... trends now

Thursday 30 June 2022 08:12 PM Tessa Thompson seen checking out of NYC hotel as she gets help from pal loading ... trends now

sport news Rafael Nadal marches into third round of Wimbledon with four-set victory over ... trends now

sport news The England team that reached the final of the 2009 Women's Euros - where are ... trends now