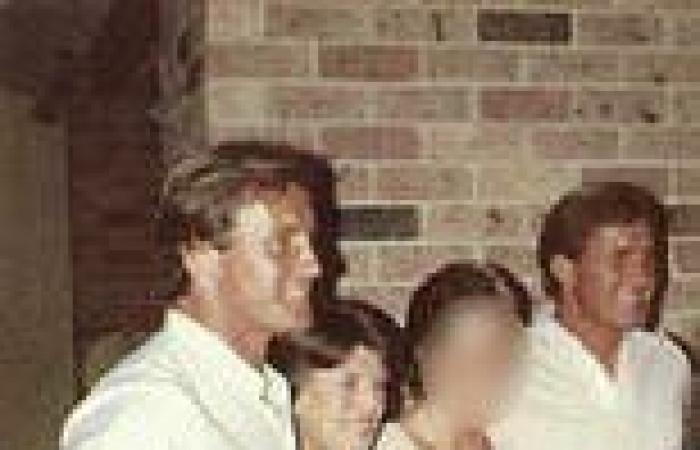 The schoolgirl and babysitter pursued by teacher Chris Dawson before he allegedly murdered his wife has been accused of 'telling vicious lies' to 'destroy him and his family'.

Pauline David, for Dawson, repeatedly attacked 'JC' - the onetime babysitter that swam topless in Chris Dawson's pool just months before his wife Lynette vanished - in the witness box on Friday, accusing her of inventing stories to harm him.

In court, Ms David told JC 'saying you were a sex slave ... is absolutely not true',' claimed JC was using 'that kind of language because it creates a good story you are wanting to sell' and accused her of 'reinventing your life with Chris Dawson in the most vicious way'.

'It's a pretty sensational stuff (and) one of the reasons is you think you can make a fair bit of money.'

JC replied that the sex slave story 'is true', and forcefully said 'no' in response to the assertion she wanted to destroy Dawson's life.

Ms David said one of the claims JC made to police in 1990 after leaving Chris Dawson was that his twin brother Paul's wife Marilyn had forged the signature of Lyn Dawson after her disappearance to cash in on an insurance policy.

JC had told detectives about a conversation between Paul, Marilyn and Chris Dawson at the Bayview house after Lyn's alleged murder. 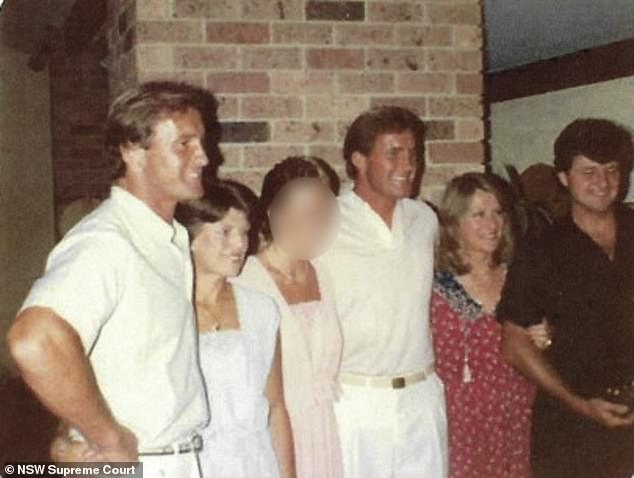 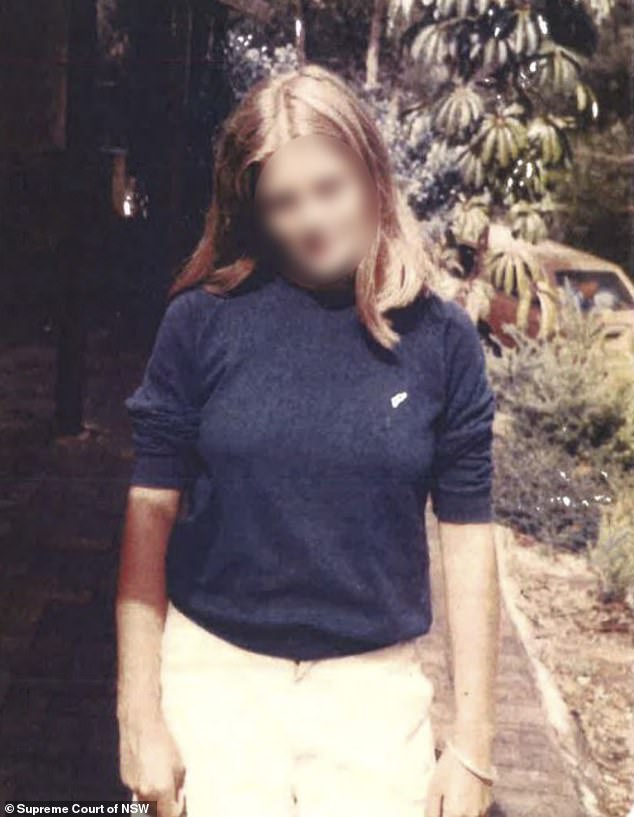 Chris Dawson's layer accused JC (above) of telling 'vicious lies' to destroy him and his family, including what the barrister said was an untrue allegation about an insurance policy forgery 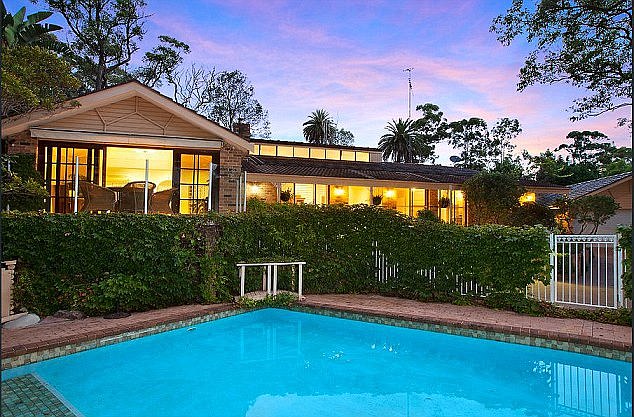 In her police statement, read out in court, JC said: 'During that first year at the house, I recall there being a situation where an insurance policy was cashed in by Chris.

'I believe it was a policy in Lyn's name taken out on Chris's life. It required Lyn's signature to cash policy in.

'I was present when a discussion between Chris, Paul and Marilyn ... it was agreed Marilyn  would sign Lyn's signature on this document.

'I was familiar with both Lyn's and Marilyn's handwriting, similar in appearance ... being both small and neat.'

Ms David put it to JC the reason she made the allegation was 'to create the impression Chris Dawson was doing something nefarious ... there was no such conversation', to which JC replied, 'there certainly was'.

'(You were) utilising that as an opportunity to tell another vicious lie about Chris Dawson and his family,' Ms David put to JC, who replied, 'No'. 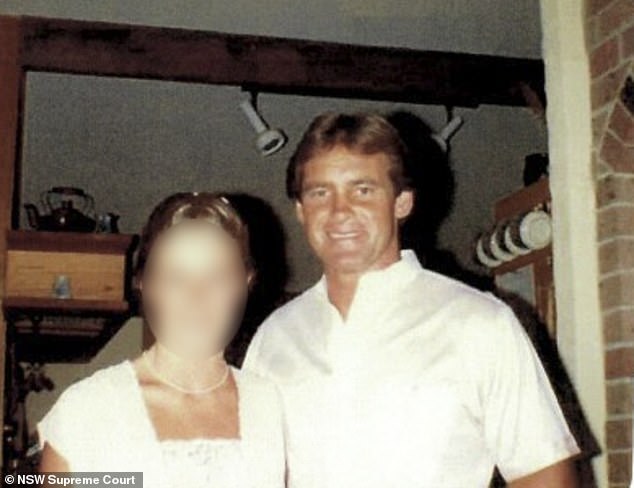 Chris Dawson's barrister accused JC (above on her 1984 wedding day) of lying about being a sex slave in a bid to destroy Dawson , his family and to make money out of a 'sensational' story 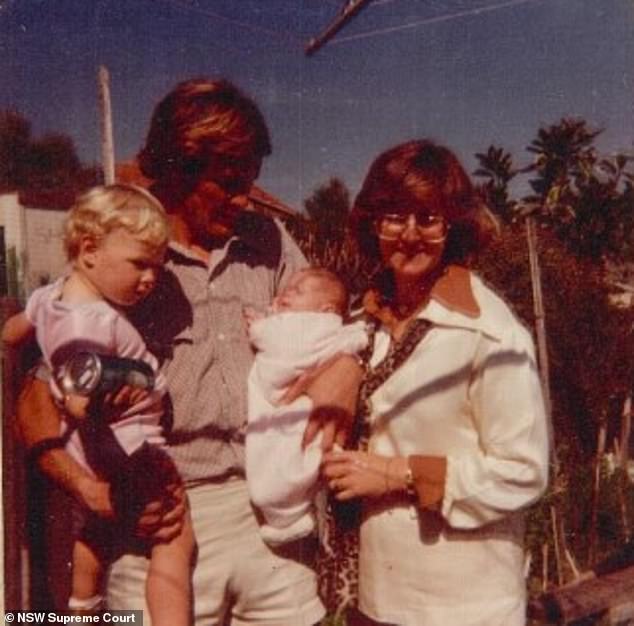 'Just as you cut her out of many photographs? You used to sometimes cut Lyn Dawson out of photographs of the family?'

Ms David tendered photographs of JC and Chris Dawson on their wedding day, in which she asserted the teenager looked like the 'happy, quintessential beaming bride'.

JC said looking happy 'didn't mean I was happy ... I think I'd resigned myself that I was not going to get away from him, because I'd tried and he'd pursued me down the street, rapped on my door.'

Dawson, 73, is standing trial in the NSW Supreme Court accused of murdering his wife, who disappeared in January 1982, aged 33.

The Crown claims that then-high school teacher Chris Dawson killed Lynette and disposed of her body because of his affair with JC, who was one one of his PE students.

Dawson's legal team has argued that while he may have failed his wife as a husband, but he did not kill her. 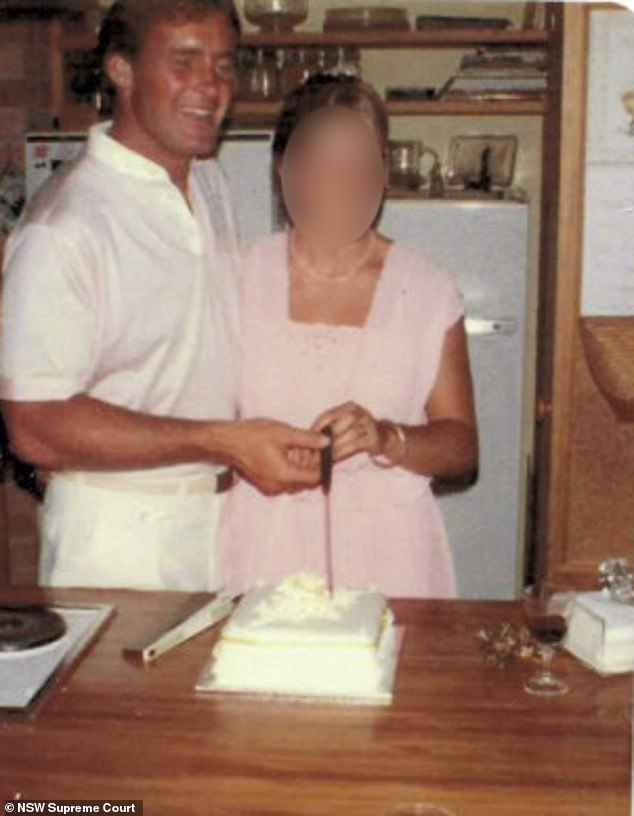 JC said that rather than being a happy bride, she had wanted to end the relationship and be a normal teenager, but that Chris Dawson had chased her into submission

The ex-schoolgirl who married Chris Dawson after he allegedly murdered his wife Lynette has described how she feared for her life after he violently ripped off a G-string she secretly bought.

The woman known as JC said Dawson sold his family home, disposed of his wife Lynette's clothes and jewellery and moved her and his daughters in December 1984 to a remote Queensland property she came to call 'the compound'.

She was heavily pregnant with her own child, but had married Dawson in January of that year, when JC said, he had first been violent towards her.

JC said that after all the wedding guests had left, Dawson 'turned to me and grabbed me about the neck with his two hands, I don't know why'.

The remote property was on three hectares of bushland at Yawalpah near Coomera in Queensland which was then 'in the middle of nowhere', surrounded by a chain wire fence which was constantly banged into by kangaroos. 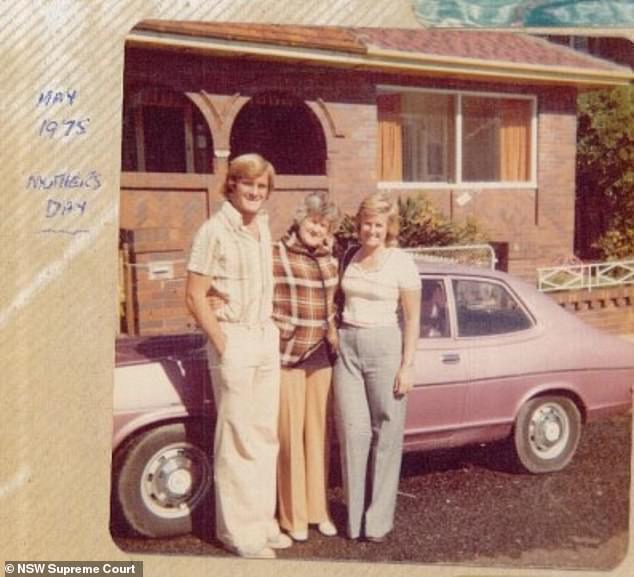 Chris Dawson (above) with Lyn Dawson and her mother in 1975 when the family still believed he was a 'gorgeous' and loving man, but seven years later Lyn would have vanished from the face of the earth

'I felt like a prisoner there,' JC told the court, saying she had moved up there heavily pregnant with her daughter  and had no neighbours other than Chris Dawson's twin Paul and his wife, Marilyn.

After giving birth to her own daughter Kristen in January 1985, JC said she felt differently towards Dawson's daughters with Lynette.

'I was only allowed to treat them like little princesses and if I did discipline them he would discipline me and they came to realise I had no authority.

'(But) I was consumed by my own child and the love I had for her. Chris Dawson was not happy' .

After two more years in the compound seeing virtually no-one, JC became worried her daughter 'had no contact with children her age' and took her to play group, although Dawson told her 'not to go'.

After discussing married life with other mothers, and telling Dawson about women who 'go out shopping by themselves and meet other people', he 'forbade me' from going back and 'cut up the credit card'. 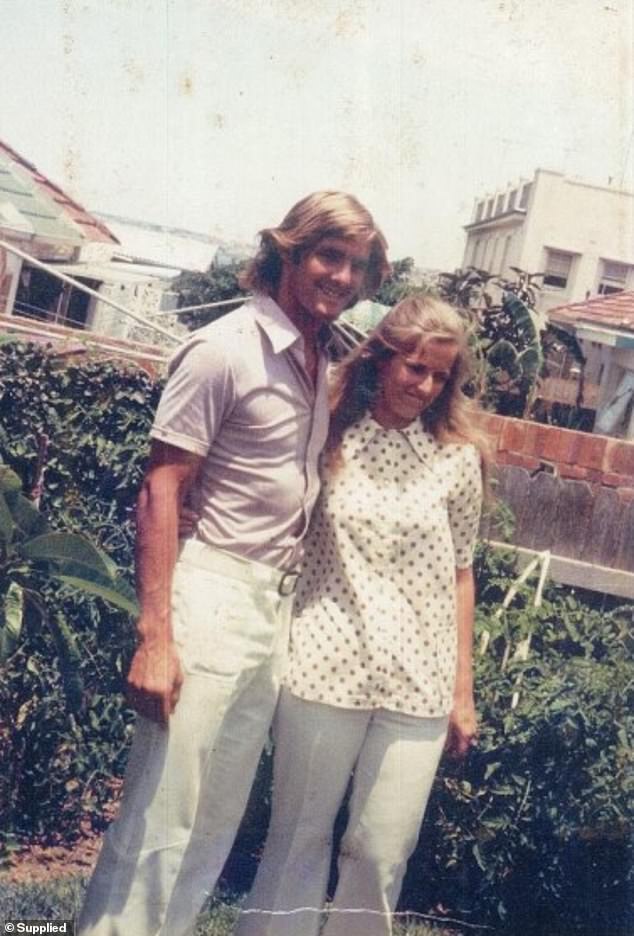 When JC brought up the topic of the disappearance of Dawson's first wife Lyn (above Lyn with Chris) she said to him 'you got rid of your first wife, you could easily get rid of me', and he went very still 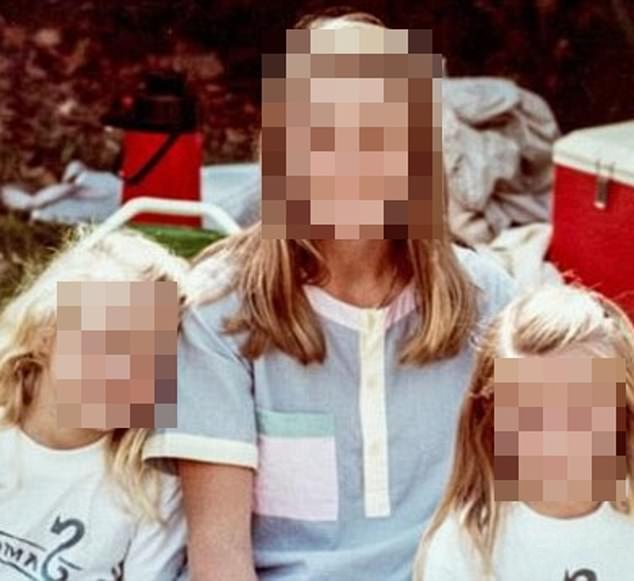 JC (above with Lynette Dawson's daughters) said she was expected to treat them like 'princesses' but when she took her own daughter to play group, Chris Dawson forbade her to return and cut up her credit card

She said by 1989 she'd made a friend, a woman called Toni Melrose who played Cooee the Gumnut Fairy at Dreamworld which was up the road from her house and the two women had gone to a lingerie party.

'I purchased this G-string underwear. I probably used cash I'd squirrelled away,' JC told the court.

'I brought it home and put on for Chris Dawson and paraded around. He said 'you are only going to wear it for me' .

'I said 'I'll just wear it as underwear as I see fit'. He got physically violent at me (saying) 'you're not going to wear that for anyone but me', you don't have any rights kind of thing, and he ripped it off me.

'I was frightened. Something like that hadn't happen before.'

That same year, JC said she had consulted a solicitor 'because as the relationship had deteriorated so badly, I feared for my life basically at that time.'

Chris Dawson had told her about the Yawalpah house they owned jointly that 'this is all mine, you won't have anything if you leave me'. 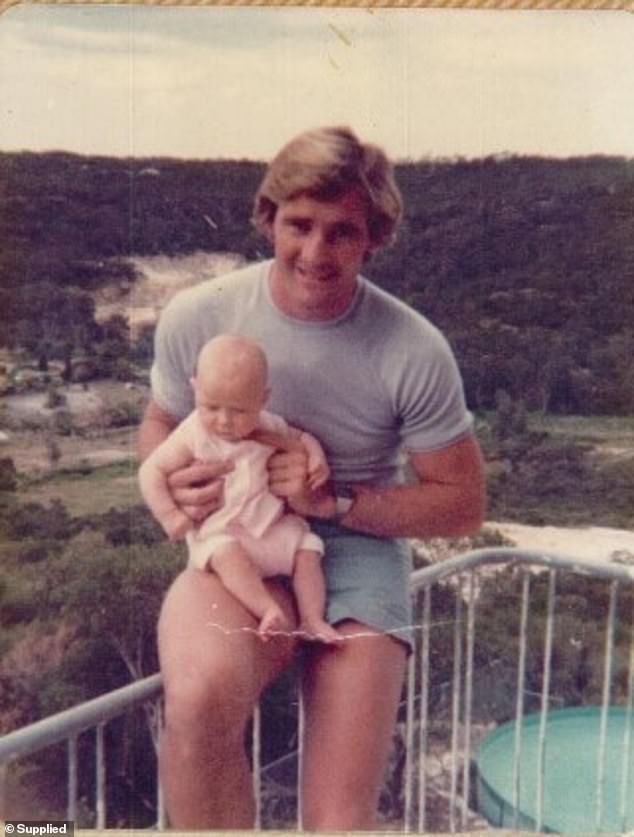 JC realted how Chris Dawson became enraged when she brought home a secretly purchased a G-string and got physically violent, saying 'you're not going to wear that for anyone but me' and 'he ripped it off me' 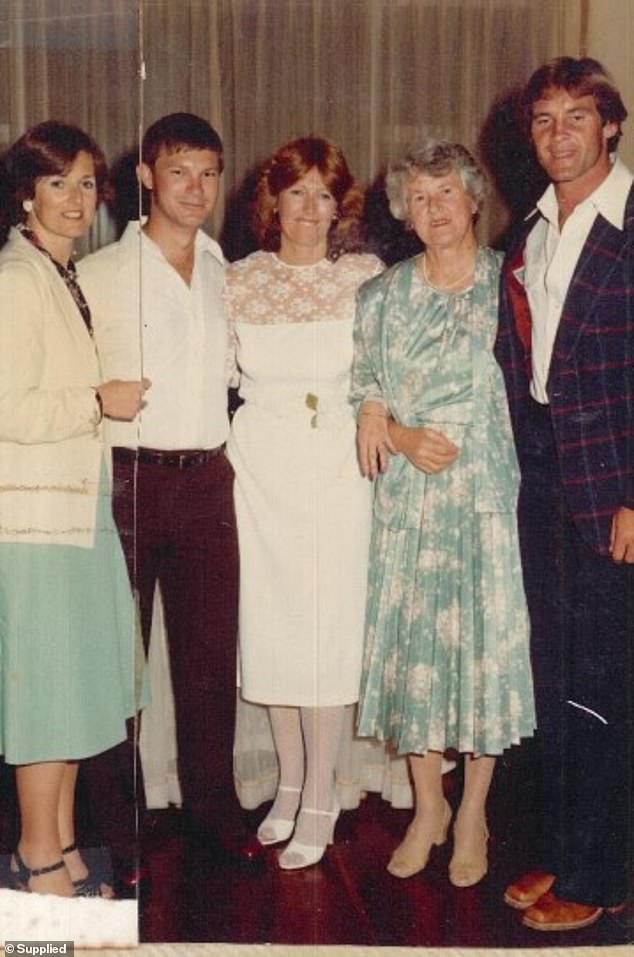 JC said she later met with members of Lyn's family (Lynette Dawon, above left, with her mother, second right, and Chris, right) and tolde them about his 'hit man' plan, after which she went to police

Asked whether the topic of the disappearance of Dawson's first wife Lyn ever arose, JC said 'it was never a topic of conversation. I brought it up one time and said 'you got rid of your first wife, you could easily get rid of me'.

JC said Dawson's response was to go 'completely still' and then say to her 'don't say things like that to me'.

She said she left the marriage in 1990, filed for divorce 'quickly and was granted custody of Kristen.

Under cross-examination by Pauline David, JC  denied she had gone 'out of her way top find time' to be with Chris Dawson as a schoolgirl or that he had initially had an 'entirely appropriate teacher-student relationship' with her.

'I think his behaviour towards me was inappropriate for a teacher' and shot back at Ms David's insistence that it had been in 1980, saying 'the grooming stage you mean?' 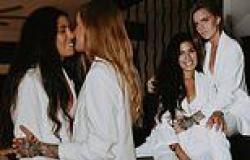