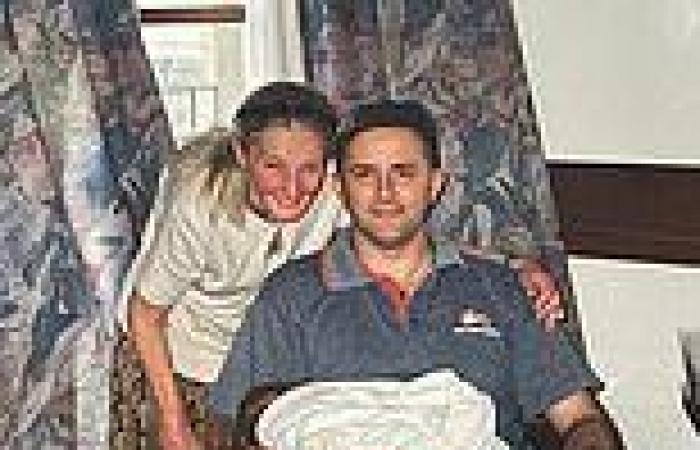 Anthony Albanese grew up in public housing as the son of s single mother who was a disability pensioner crippled with arthritis - but he had a long-held dream of running Australia.

On Saturday, he brought the Labor party to victory for the first time in nine years when he was elected as the nation's 31st Prime Minister - snatching at least nine seats from the Scott Morrison's Liberal Party.

It wasn't a landslide win - Labor had 72 seats as of Sunday morning, four short of the 76 needed for a majority, but he is on track to pick up five more for a narrow majority.

Mr Albanese will very likely have to form government with Greens and 'teal' independents, but he didn't let that stifle his mood during his post-win speech on Saturday night - the man was ecstatic.

'I say to my fellow Australians, thank you for this extraordinary honour,' he said at the Canterbury-Hurlstone Park RSL Club, flanked by his partner Jodie Haydon and his son Nathan.

'My Labor team will work every day to bring Australians together, and I will lead a government, worthy of the people of Australia.' 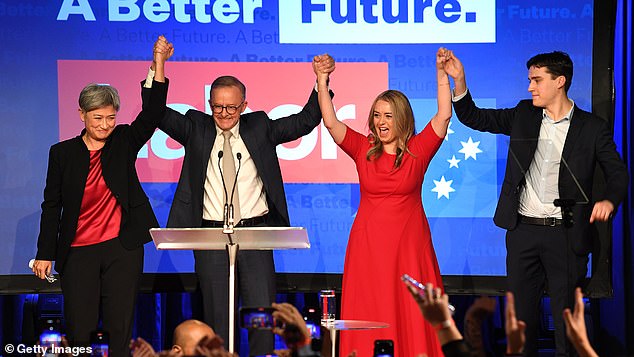 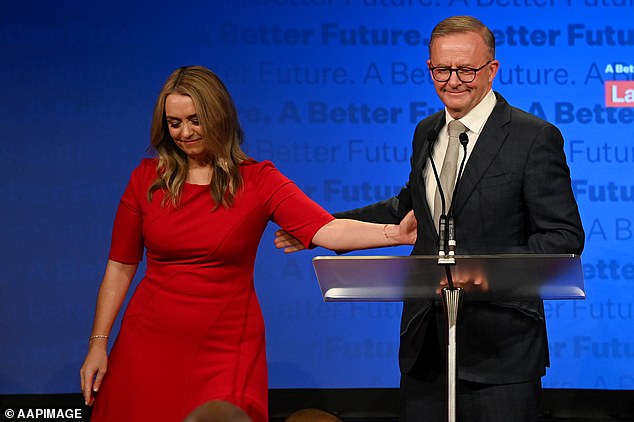 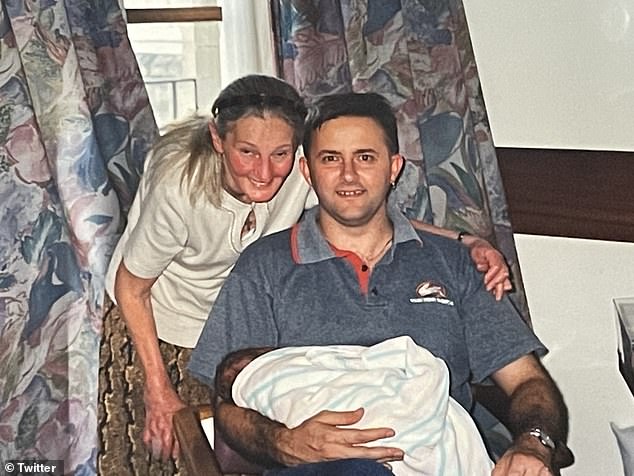 Anthony Albanese is pictured with his son, Nathan, and his mother Maryanne - just before she passed away in 2002

The 59-year-old said his mother Maryanne Ellery, who died in 2002, would be 'beaming down on us', and said he hoped that families living in public housing were watching.

'Because I want every parent to be able to tell their child, no matter where you live or where you come from, in Australia the doors of opportunity open to us all,' Mr Albanese said.

It was no coincidence that Paul Kelly’s 'From Little Things Big Things Grow' played as the new Prime Minister left the club at about 1am that evening.

Mr Albanese, best known as 'Albo', has been forthcoming about his humble beginnings since long before he became the leader of the Labor party following Bill Shorten's loss to Scott Morrison in 2019.

Morrison even went as far as to call him a 'great Australian' who never forgets his roots during the final leaders' debate last week - partly because he was asked to say something nice about his opponent, and partly because it's undeniable. 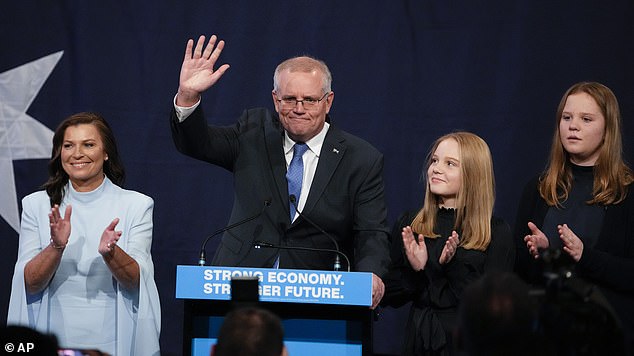 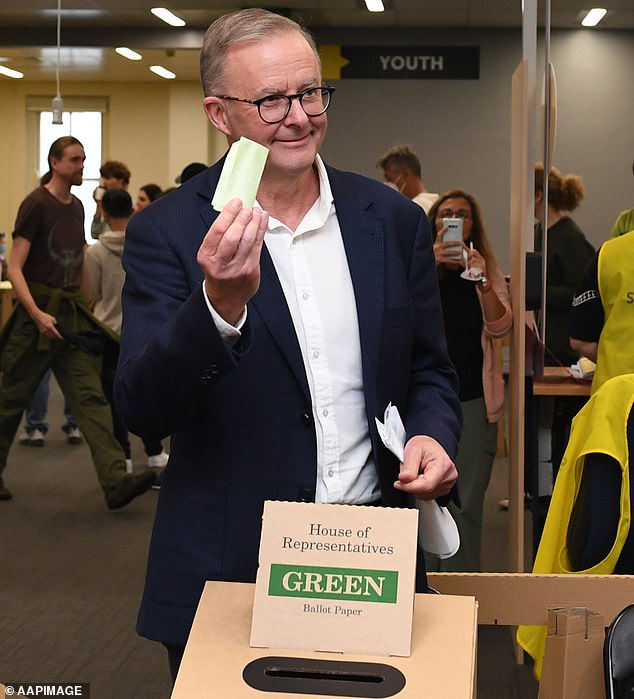 Mr Albanese proudly says he 'came out of the womb with three great faiths – the Labor party, the Catholic Church and the South Sydney Rabbitohs'.

He credits his character and moral compass to his mother, who was determined to give him a better life than she had - despite living in a small housing commission unit in Camperdown, in Sydney's inner-west.

Their flat was conveniently located opposite the hospital, which Maryanne visited frequently due to her 30-year battle with rheumatoid arthritis.

Everyday tasks, like opening jars and doors, were difficult for her - to the point where most of the knuckles in her hands were eventually replaced with prosthetics.

He was often on his own while Maryanne was hospital, so neighbours looked out for him and made sure he had hot meals to eat.

Mr Albanese also believed his father had been killed in a car accident until he was about 15 when his mother finally revealed he was the result of a fling with an Italian steward she met on a voyage from Sydney to England.

The devout Labor supporter was the first in his family to go to university - studying economics at the University of Sydney in the early '80s, which he funded by juggling multiple part-time jobs. 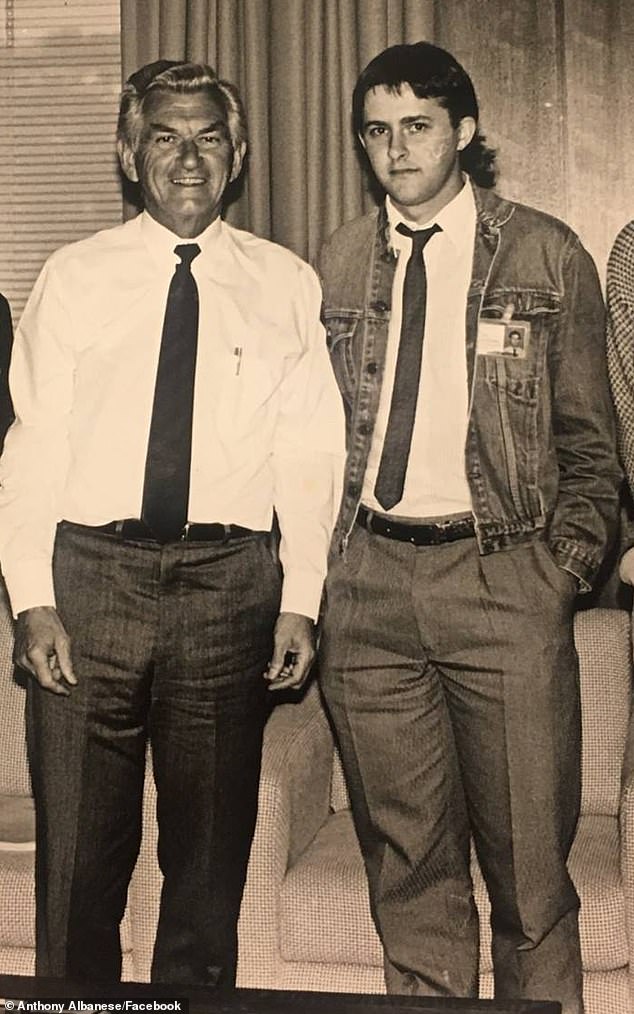 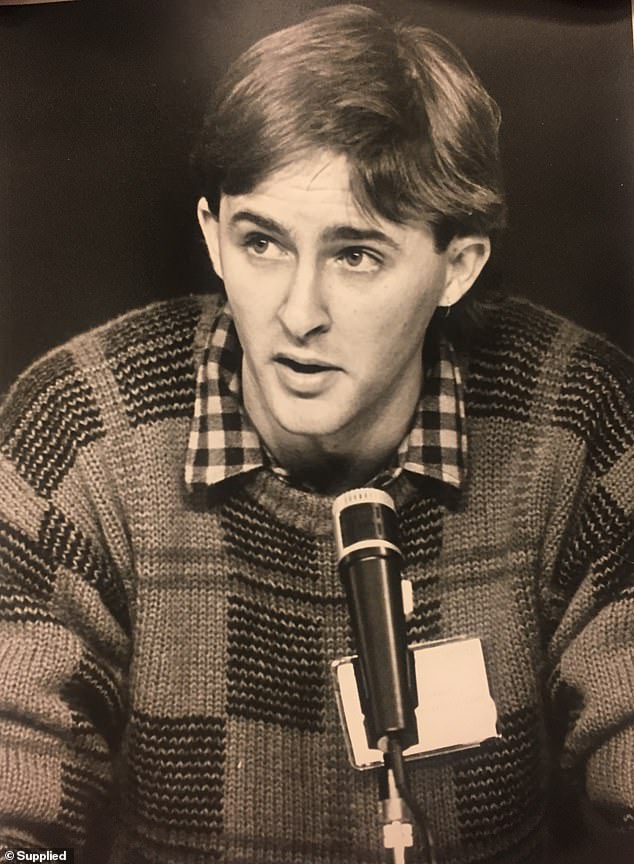 After working for minister and Labor left luminary Tom Uren under Bob Hawke in the mid-1980s he spent six years as assistant general secretary of Labor's NSW branch.

He arrived in Canberra in 1996 after he won the seat of Grayndler as John Howard rose to power - his key focus included social wage and childcare.

Mr Albanese held ministries in the Rudd and Gillard

PREV Friday 1 July 2022 09:06 AM F45 Australia: Sydney father claims he is the rightful winner of fitness ... trends now
NEXT US court’s environment agency ruling a problem for the entire planet mogaznewsen 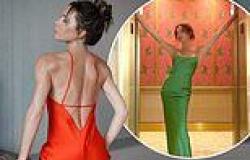 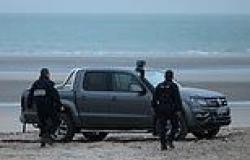