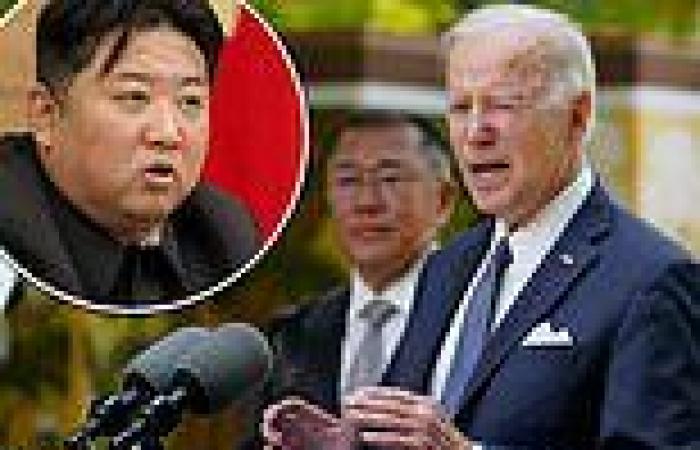 'Hello,' Biden answered when asked what he would say Kim. 'Period.'

The president also offered, 'we are prepared for anything North Korea does.'

'I'm not concerned if that's what your asking,' Biden added.

Biden answered reporters' questions about Kim at the conclusion of an appearance Sunday morning in Seoul with Hyundai's Chairman Chung Eui-sun. 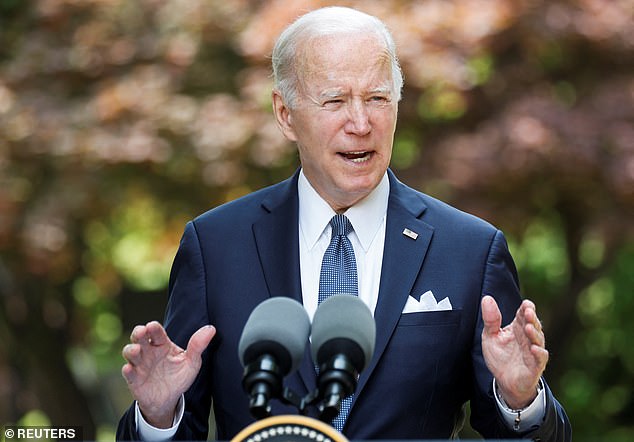 During his Saturday press conference with South Korean President Yoon Suk Yeol, Biden was asked if he was willing to meet with Kim.

He was also asked whether the U.S. would assist North Korea now that it has experienced skyrocketing coronavirus cases.

'Yes we've offered vaccines, not only to North Korea but to China as well and we're prepared to do that immediately. We've gotten no response,' Biden said.

On meeting with Kim – who got summit meetings from predecessor Donald Trump during his tenure – Biden included caveats.

'With regard to whether I would meet with the leader of North Korea, it would depend on whether he was sincere and whether it was serious.'

The president's comments came after U.S. officials warned that Kim could try to make a statement during Biden's visit by firing off another ICBM or conducting a nuclear test. 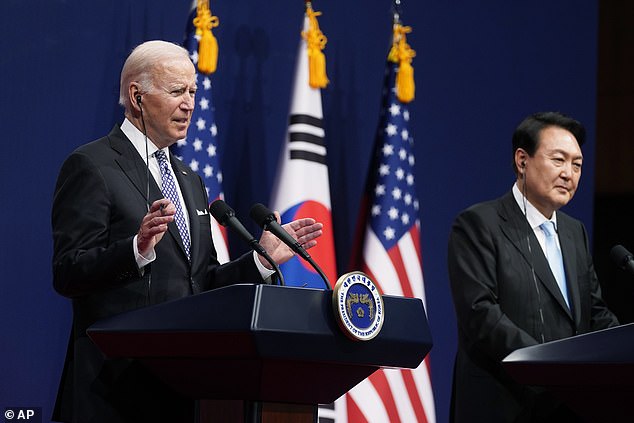 'It would depend on whether he was sincere and whether it was serious,' President Joe Biden said at a press conference when asked whether he would meet North Korean dictator Kim Jong-un 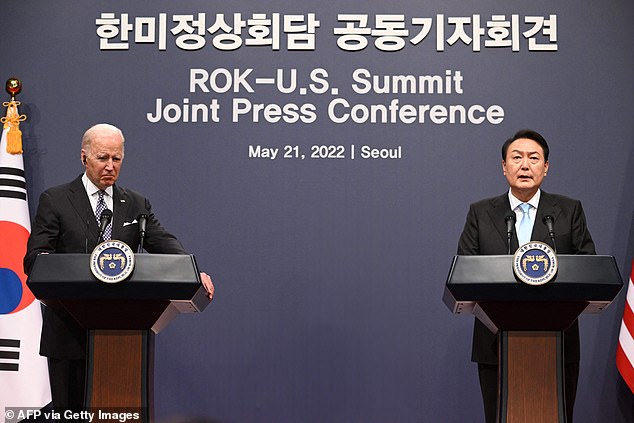 Biden met with Yoon Saturday in Seoul as the two men pledged to work together to maintain the rules-based international order.

'Putin’s war against Ukraine isn’t just a matter for Europe. It's an attack on democracy and the core international principle of sovereignty and international integrity,' Biden said at the start of a press conference Saturday.

The two men met for about two hours, and committed to 'further strengthen deterrence and ensure close cooperation to address the threat posed by the Democratic People’s Republic of Korea (DPRK)' – as North Korea's threat of further nuclear or ballistic missiles tests hung over Biden's trip.

According to a joint statement, 'both leaders agree to initiate discussions to expand the scope and scale of combined military exercises and training on and around the Korean Peninsula.'

Those exercises have send a strong signal of U.S.-Korean cooperation in the past amid North Korea's repeated saber rattling.

The statement also said the U.S. was willing to use nuclear weapons if necessary to ensure South Korea's defense.

Biden also said the two agreed on 'promoting stability across the Taiwan Strait' – a reference to the threat of a Chinese invasion of Taiwan.

After repeating lines from domestic speeches about American economic strength, Biden said the U.S. economy was poised to grow at a rate faster than China's for the first time since 1976.

Yoon also pointed to his country's economic strength and added responsibilities – saying it was the world's 10th largest while also being a 'cultural powerhouse.'

Yoon said he was prepared to present an 'audacious plan' that will 'vastly strengthen its economy and improve the quality of life' for the people of North Korea.

Yoon, who took a hard line during his election campaign, said the 'door to dialogue remains open' if North Korea 'genuinely embarks upon denuclearization.'

But he also called a strong defense against potential threats from the DPRK 'paramount.'

Also hanging over Biden's trip is the war in Ukraine, and the two countries want to make it an area of emphasis.

'Both Leaders reaffirmed their commitment to strengthen the U.S.-ROK alliance and to broaden its focus beyond the Korean Peninsula to take on global challenges, including threats to the rules-based international order, such as Russia’s invasion of Ukraine. The two Leaders committed to increase cooperation on a broad range of priority issues including critical technologies, economic and energy security, global health, and climate change,' according to a White House readout of their meeting.

The two men met for a packed day of diplomacy with the country's new leader, who has only been in office for 11 days.

Biden began his day with a solemn gesture to honor Korea's war dead, including in the Korean War. Biden donned white gloves and took part in a wreath-laying ceremony at Seoul National Cemetery.

Then, he sprinkled three pinches of incense ash into an urn, followed by a moment of silence.

After that, it was onto some of the traditional diplomacy that Biden savors, with a formal meeting with Korea's new president Yoon at the People's House. 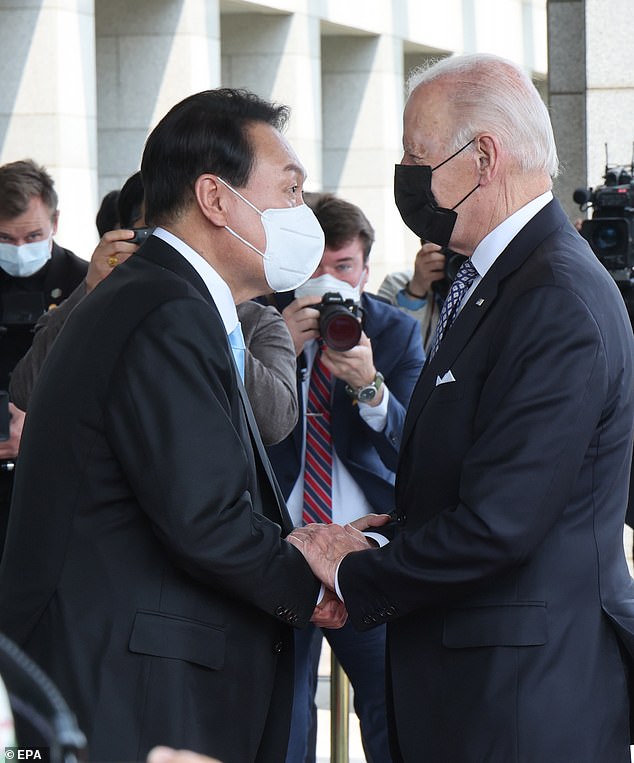 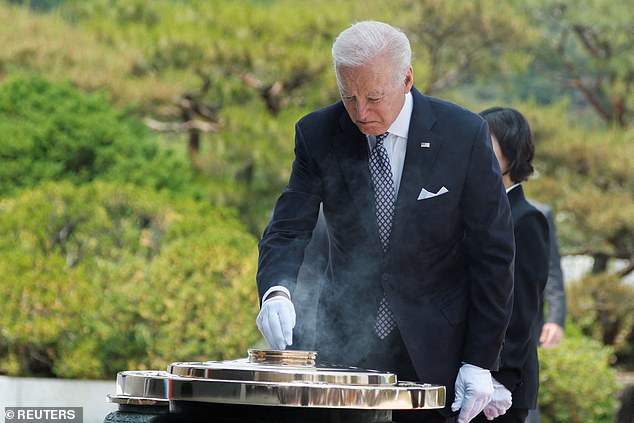 President Joe Biden places incense in the memorial flame during a wreath-laying ceremony at the Seoul National Cemetery to honor the sacrifice of Koreans who died to protect their country. It was his first public event Saturday at the start of his trip to Korea 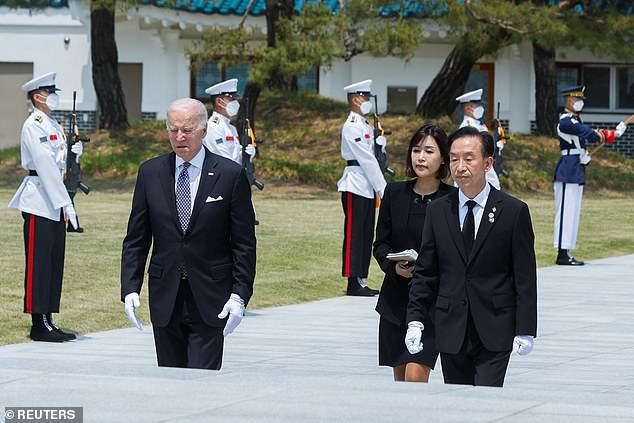 President Joe Biden (left) took part in a wreath-laying ceremony at the Seoul National Cemetery. The site honors soldiers including those who died in the Korean War 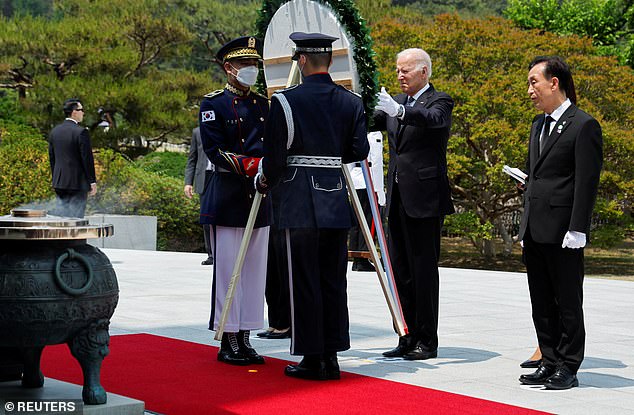 Yoon moved his official offices from the Blue House to a defense ministry compound.

'Today with this visit we're taking the cooperation between our countries to new heights,' Biden said, gushing about a partnership he said was built on 'shared sacrifice.'

He mentioned the North Korea threat and said cooperation was 'essential' on the global stage.

Biden and Yoon each wore masks during their outdoor greeting. South Korea has been dealing with its own coronavirus issues, and maintains an indoor mask mandate.

Saturday night, the men met in a more festive setting - a state dinner at the National Museum of Korea.

Biden was welcomed to the dinner - which he's attending stag as the first lady is in Latin America - by a colorfully dressed honor guard.

'It is a pleasure to welcome you here tonight,' Yoon said. 'The ROK-U.S. alliance was forced in blood on the battlefield of the Korean War. Since then, the alliance has been a strong foundation, which buttresses Korea's economy, growth and prosperity based on free democracy and market economy.'

Yoon pledged to 'draw and design a new future vision of our alliance with you, Mr. President.'

The Korean leader then quoted Yeats 'one of your favorite poets,' he told Biden, who had a laugh.

Biden then held up a glass and gave his toast, opening it with the closeness he felt to the new leader.

'We shared a lot of stories from our early beginnings and I think maybe we told each other too much, I don't know,' Biden said to laughs. 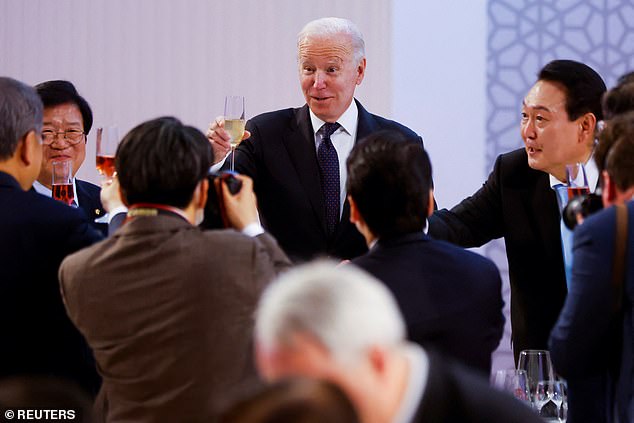 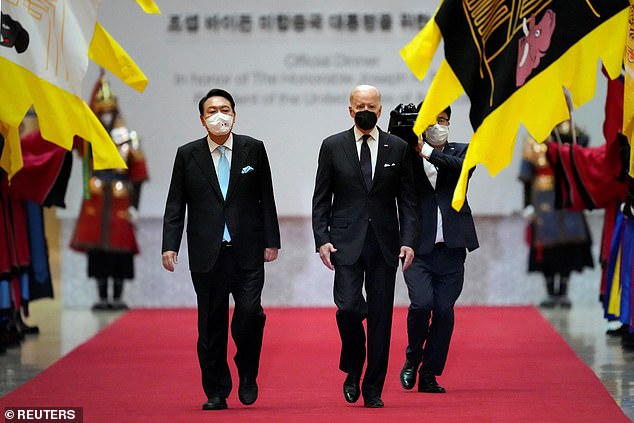 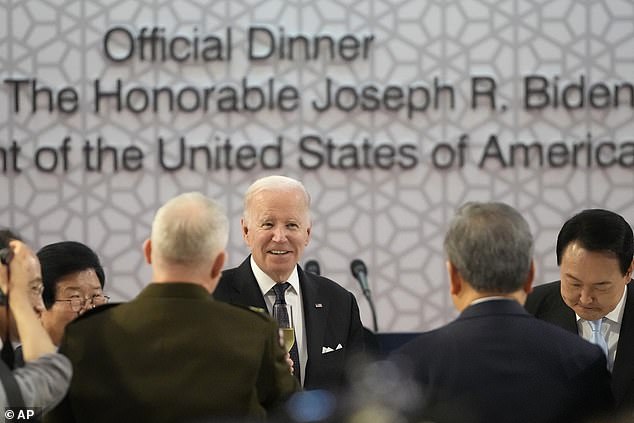 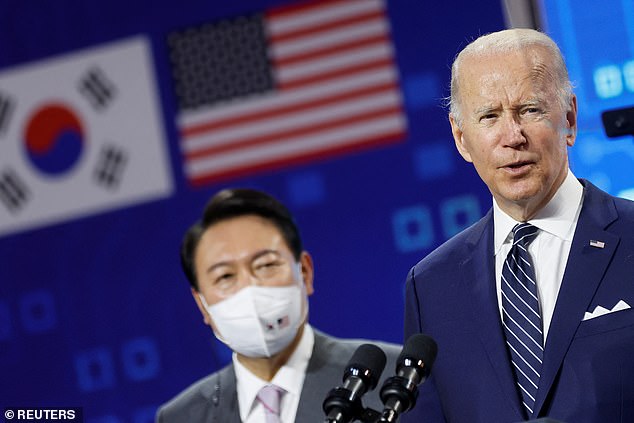 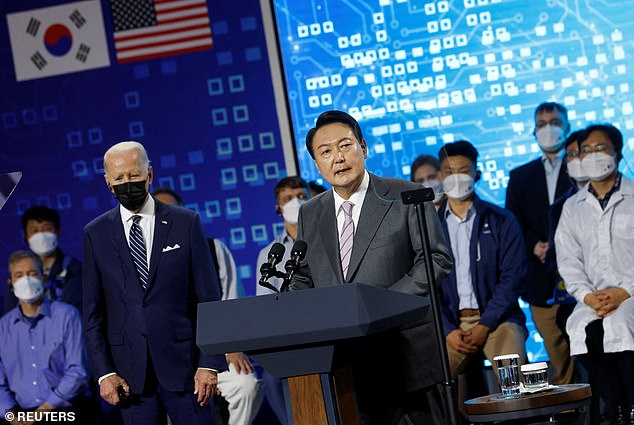 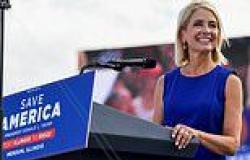 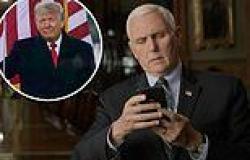 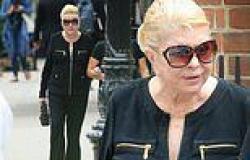 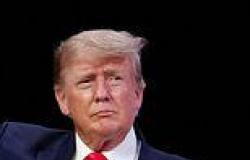