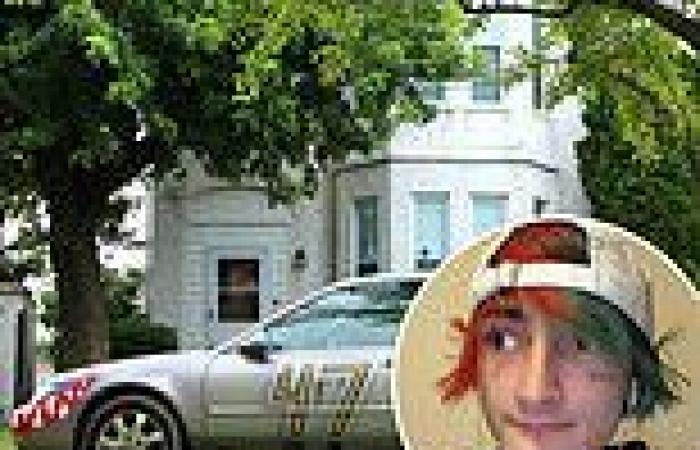 Highland Park shooter Bobby Crimo was about to be thrown out of the apartment where he lived behind his father's home, DailyMail.com can reveal exclusively.

And the man who caused terror at a July 4 parade was spurned by a co-worker who he desperately wanted to date.

The 21-year-old woman, who asked not to be identified, is now blaming herself for possibly being the spark that ignited Crimo's murderous rampage.

'I'm blaming myself,' she told DailyMail.com.

'We didn’t date, but he did like me, he did have interest in me,’ she added. ‘But my parents are strict and I don’t date. So I told him no, but we can be friends.'

The young woman lives close to the Crimos' family home in Highwood that a mortgage company has applied to be placed in foreclosure claiming it is owed nearly $200,000.

And if it is, Crimo's family could be on the streets before the end of the year.

Public records show the home had been in the Crimo family for decades. The alleged mass murderer's grandfather Robert Crimo Sr. originally lived there before he died in 2018.

His son Robert Crimo Jr. – who has owned delis in the Highland Park area and ran for mayor of Highland Park in 2019 – then took over the house.

But in April the mortgage company Newrez filed for preforeclosure, claiming it was owed $197,939 on the 30-year mortgage. The house is now valued at around $425,000. 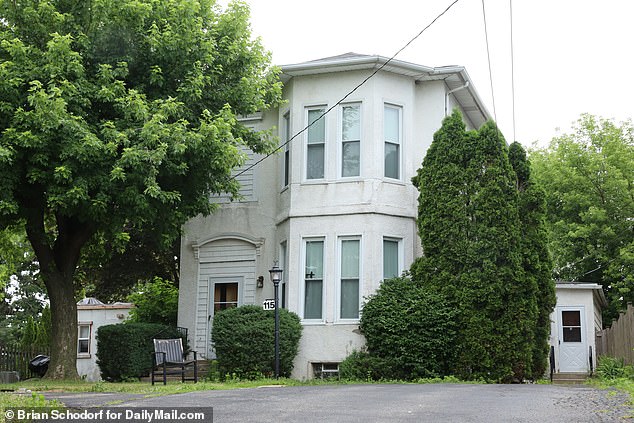 The Crimo family home in Highwood, Illinois, was placed in preforeclosure in April. Alleged parade shooter Bobby Crimo lived in the apartment to the rear right of the main house 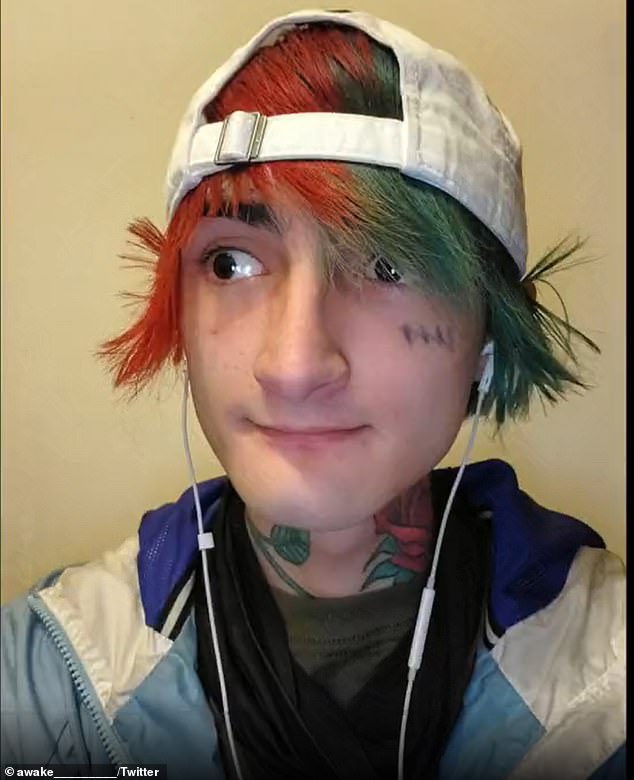 Crimo is a hiphop artist who went by the name Awake the Rapper. He now faces seven life sentences without possibility of parole following Monday's Highland Park shooting 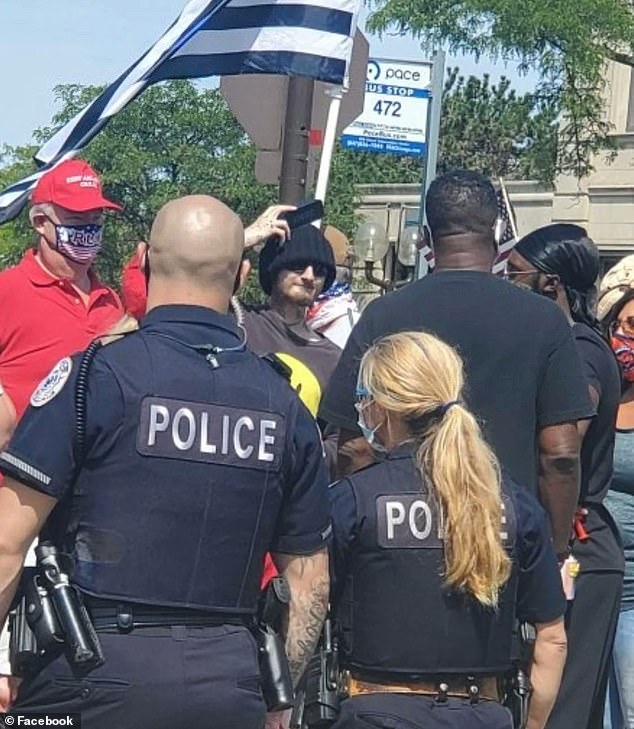 Crimo, a Trump follower, was obsessed with the number 47. If elected in 2024, Trump would become the 47th president. He is pictured at a Trump rally in suburban Chicago 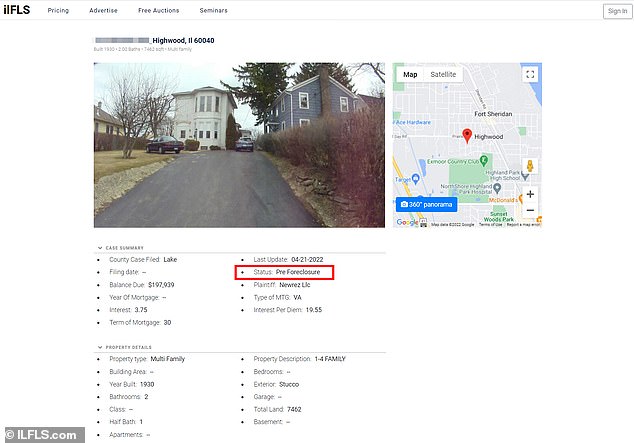 Under Illinois law a homeowner cannot be thrown out of their house for at least seven months, meaning the earliest the Crimo family could have lost their home would be a few days before Thanksgiving.

The family home, built in 1930, has seen better days. Its white stucco facade is fading and the asphalt drive is in need of work.

Crimo, 21, lived in an apartment behind his father's home.

The alleged shooter had a fascination with the number 47. He had it a tattoo of the number on his face and his car was festooned with it. It could be relevant to the date of the shooting, the fourth day of the seventh month.

He was also known to be a follower of Donald Trump who would become the 47th president if he were to be successful in the 2024 election.

Crimo, a hip hop artist who went under the name Awake the Rapper, is being held after being charged with seven counts of first degree murder, each of which carries a maximum sentence of life in prison without possibility of parole. 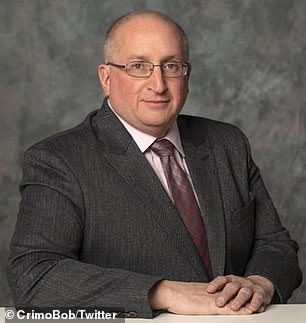 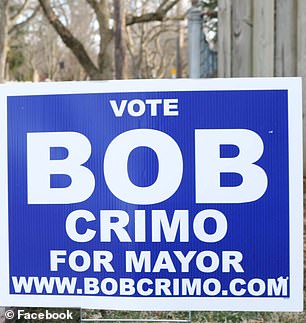 Crimo's father Robert Crimo Jr, – known as Bob – unsuccessfully ran for mayor of Highland Park in 2019. Now his home is in danger of being placed in foreclosure 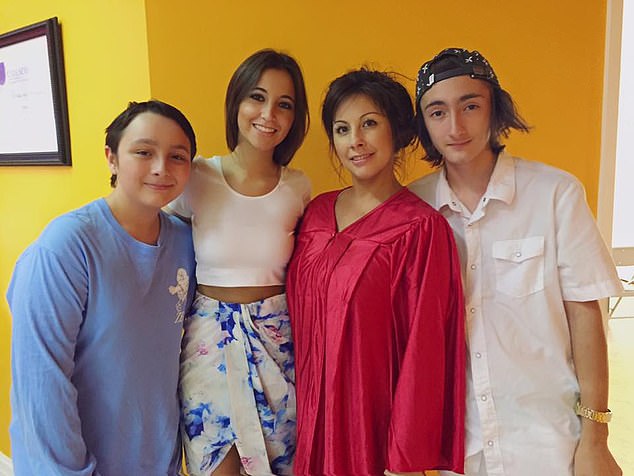 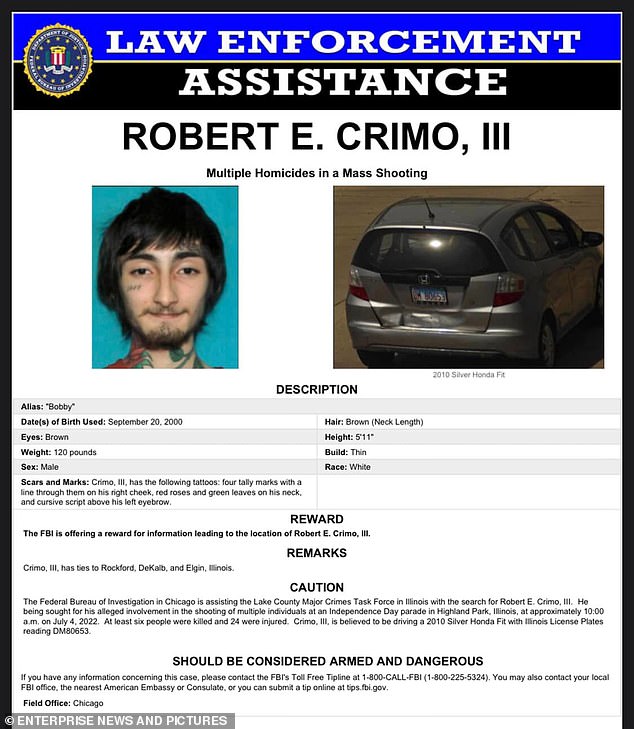 The Wanted poster issued by the FBI on Monday before Crimo was apprehended in Lake Forest, Illinois, while driving his mother's silver Honda Fit 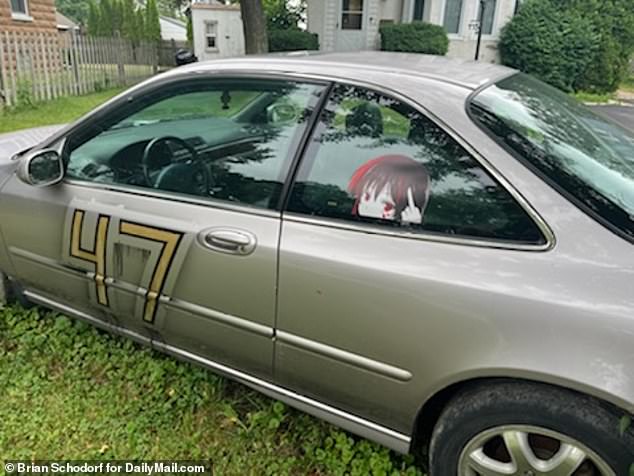 Crimo's car, which is parked outside his father's home, had the number 47 on its side. The alleged gunman was obsessed with the number and had it tattooed on his face

He allegedly shot seven people dead and injured some two dozen others when he shot 70 rounds into the parade after climbing on a rooftop of a store.

He escaped by dressing as a woman and mingling with the crowd, but was apprehended Monday evening in Lake Forest while driving his mother's silver Honda Fit.

Police at first said that Crimo was not known to them but on Tuesday, they revealed he was interviewed twice by authorities.

Police recovered 16 knives, a dagger and sword from his home but he was not arrested.

Instead, he was able to turn 21 and buy two assault rifles in Illinois, along with three other types of gun. It remains unclear why the two previous incidents were not flagged when he legally purchased the weapons.

Crimo's descent could have started when his near neighbor rejected him when they both worked at Panera Bread before it was closed temporarily due to the Covid pandemic.

She said he told her that he wanted to open a sandwich shop with his father Bob.

'I was like, don’t do that. I wasn’t even sure if I liked him like that. I said don’t do that, we’re only friends. I’m sorry if I was too nice to you. You picked it up wrong.

’I kind of just stopped talking to him then. I didn’t block him, but I did delete his messages.’ 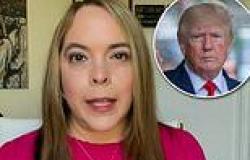 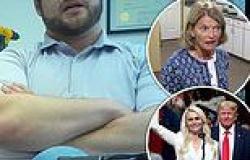 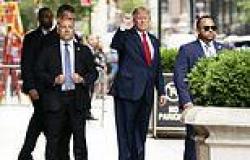 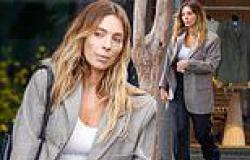 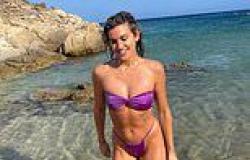