In Dennis Osadebe's "Nigerian Dream," two figures clad in fuscia and mustard yellow stare out of the painting. Their facial features are obscured by a traditional tribal mask and a futuristic space helmet. The piece parodies the 1930 Grant Wood painting "American Gothic," but exchanges a rural farmhouse for a modern home, and a pitchfork for an electric fan -- a staple for beating the heat in Nigeria.

The 31-year-old Lagos-based artist wants to challenge assumptions about African art, visualizing the continent's future by reaching into the past.

"I always want to use my art to educate people about Nigeria by making them understand that we're already future-thinking," said Osadebe, whose work fits into the movement known as Afrofuturist art combining African heritage with technology. "We are ... sophisticated and complicated. [We] can participate in art at any level."

"Nigerian Dream" is an example of "Neo African" art, a term Osadebe said he coined to describe work that rebels against stereotypes around African art. His style has captivated audiences around the world, and even won the approval of tennis champion Naomi Osaka.

Using surrealism and "post-pop" to transcend expectations
Instead of focusing on Nigeria's shortcomings, Osadebe said, including inconsistent access to electricity and poor health care, his work celebrates the future by showcasing Africa's potential.

Osadebe describes his art as "postmodern surrealism," and "post-pop." His everyday scenes, anonymous faces, and imagery of common household objects are designed to help people visualize their lives in his art.

"When people look at this piece, I want them to reflect and ask themselves: 'do I see myself in this piece and why?'" said Osadebe. "I want to convey the feeling of us as human beings ... having shared experiences [by celebrating] the most mundane, simple things."

Research is key to his artistic process. He starts by identifying features of existing images that excite him. He has borrowed horses from Renaissance paintings, David Hockney's reverse perspective, and René Magritte's playful obstruction of faces. "It's similar to collage in that sense," he added.

Next, Osadebe starts to build a digital image around that feature. When the digital rendering is complete, he prints it on canvas and paints it using acrylic. For him, combining digital and traditional mediums gives him creative freedom.

Osadebe said art is about developing a visual language that transcends geographic boundaries -- a "universal language that everybody can connect to." His work has captivated viewers in galleries all over the world, including Berlin, New York, Tokyo, Miami, London and Hong Kong.

He said learning about people's perspectives on his art fuels his confidence to create. During his first exhibition in Lagos -- 2017's "Remember the Future," inspired by the Nigerian space program -- he was nervous about his work. "I was like, what have I done? These are all cartoon characters," recalled Osadebe.

That anxiety went away when he had a discussion with the first person who walked into the gallery. "He [said] 'as a Nigerian, this is something I felt like I needed to see -- this was a perspective, a way of representation, that made me feel and see my potential.'" Osadebe said it was validating to hear that his art started a dialogue that he himself had struggled to put into words.

"Exercise Indoors" (2020) is part of a series of paintings Osadebe made of figures playing tennis indoors during the pandemic. He was inspired by his father, a tennis fan, trying to exercise at home. Credit: Dennis Osadebe

More validation came from Japanese tennis player Naomi Osaka. The four-time Grand Slam champion purchased several of Osadebe's pieces after coming across them in 2020. Her management team reached out to Osadebe, he said, and told him Osaka was drawn to a painting of a woman sitting on a horse in a living room.

"She was like 'this evokes the energy I feel when I get into a room,'" he said. While he never spoke to Osaka directly, he speculates that she liked the piece's message about controlling one's own narrative.

Last year, he painted a cover for a Racquet Magazine feature about Osaka at her request. It features a figure standing in a living room clutching tennis equipment.
Turning heritage into inspiration
Osadebe's references to his Nigerian heritage infuse his art with nostalgia. The tribal mask that often appears in his paintings was inspired by the official emblem of the Second World Festival of Black Arts and Culture -- a replica of the royal ivory mask of Benin.

Osadebe grew up in Festac Town, the federal housing estate in Lagos that was designed in 1977 to house the festival's participants. Despite living in a place associated with the arts, he said there wasn't enough representation of young and relatable artists in Nigeria when he was growing up. "I never knew that [a career in art] was a possibility," he added.

He is the first artist in his family. His father's career as an entrepreneur inspired Osadebe to study business management at Queen Mary University of London. He completed a master's degree in innovation and entrepreneurship, before returning to Lagos to work for a boutique finance firm. He started painting as a way to vent his frustrations -- then realized he could turn his passion into a career.

"Composure" (2022) was part of Osadebe's most recent exhibition "MODERN MAGIC" at König London. It's part of a series of self-portraits that Osadebe said he painted in response to a growth in demand for his work, and the expectations that came with it. Credit: Dennis Osadebe

His personal journey as an artist was part of the inspiration behind his recent series of self-portraits. In "Composure" (2022), furniture, plants, and paper swirl through the air in a living room. A figure stands motionlessly before the objects -- calm amid chaos.

"I really wanted to reflect myself as an artist today [and] speak on my findings, my struggles, my frustrations," said Osadebe. Under immense pressure, there is an expectation to retain composure, he added.

For Osadebe, "optimism is critical." It's the phrase he lives by when addressing serious themes in his art -- like Nigeria's long history of military rule from the 1960s into the 1990s in "General (Shoots a fake gun)," or police brutality in the video game he designed called "Playful Rebellion." He said his art uses "optimism as a source of protest."

Osadebe painted "General (shoots a fake gun)" in 2019. He said the tiny Nigerian flag emerging from the barrel of the gun reflects military leaders' lack of progress on taking the country to new heights. "For the leaders, the priority has never been to empower the people," he said, adding that the book beneath the figure's foot symbolizes education taking the last priority. Credit: Dennis Osadebe

That mentality fuels his continued experimentation with new mediums. He has already made 3D sculptures and interactive graphic interfaces. While he can't give away any spoilers just yet, he said his next series will celebrate Nigerian identity.

Spring is for skinny bears and March Madness basketball. Fall, however, is for ...

The CDC says it will no longer maintain a country-by-country list of travel ... 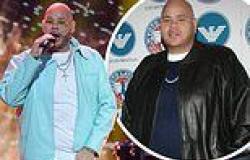