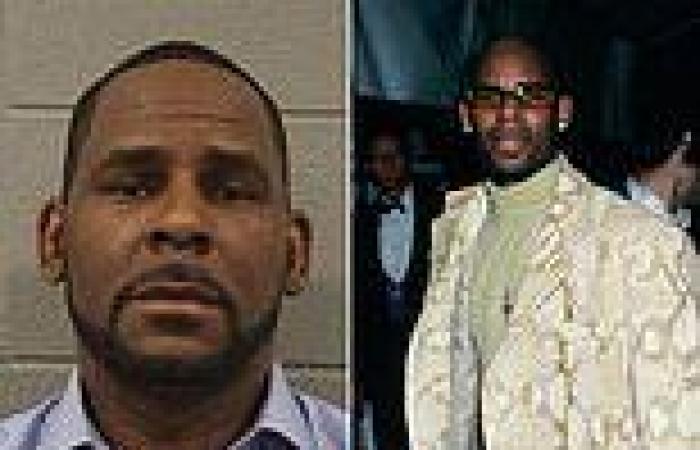 Jurors in R. Kelly's child pornography trial watched graphic clips from three sex tapes of the singer sexually assaulting his goddaughter when she was only 14.

Although the visuals of the late 90s tapes were obscured from view for the rest of the courthouse, audio could be heard of the young victim, going by the pseudonym 'Jane,' speaking to Kelly about her genitals, the Chicago Tribune reported.

'Get on your knees,' the teen is instructed by a man alleged to be Kelly.

'Daddy, do you still love me,' the victim responds.

The man then gives 'sexually explicit instructions' to the young girl as he warns her to follow directions as she apologizes.

Friday's tapes are at the center of the federal case against Kelly, a convicted pedophile, who faces new allegations of enticing minors for sex, producing child pornography, and rigging his 2008 pornography trial. 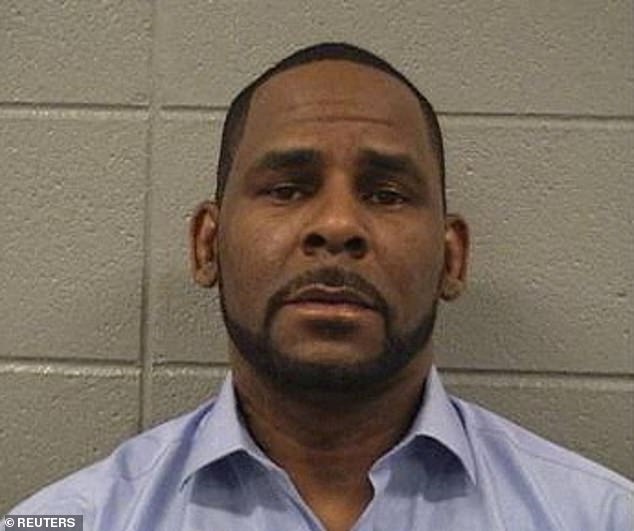 A Chicago jury watched clips of three separate sex videos of convicted pedophile R. Kelly (pictured at a Chicago holding cell in 2019) having sex with his then 14-year-old goddaughter 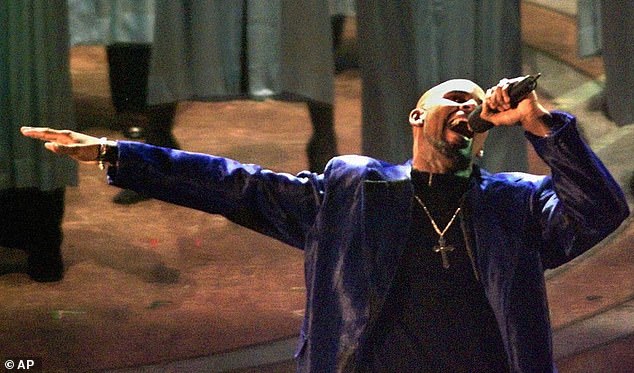 Kelly allegedly shot the tapes between 1998 to 2000, as the R&B singer enjoyed national fame. In one of the videos, the man alleged to be Kelly could be heard giving the teen sexually explicit instructions as she referred to him as 'daddy' 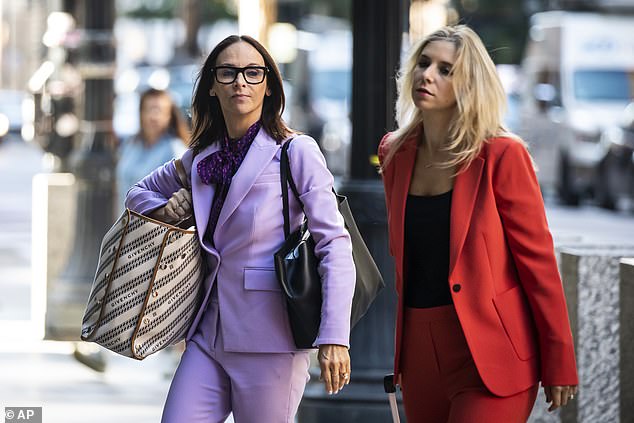 Kelly's lead attorney Jennifer Bonjean (left) also cross-examined the victim, 'Jane,' showing off text messages between her and the singer. Jane hit back at Bonjean, saying she contacted Kelly because she was finally going to come forward with her true testimony

After the tapes were shown, Kelly's defense had not directly contested whether it was the singer in the videos, instead saying that their authenticity couldn't be verified.

Prosecutors have said Kelly shot the videos of Jane in a log cabin-themed room at his North Side Chicago home between 1998 to 2000.

The defense also failed to give jurors an alternate version of Jane's story relating to the tapes, only reiterating her decades-long denial that it was her in the graphic videos.

The attorneys also echoed claims that Kelly was previously acquitted for conduct related to the tapes back in 2008, but the singer and his two co-defendants are accused of threatening Jane and bribing others to change their testimony in that trial.

Earlier on Friday, Kelly's lead attorney Jennifer Bonjean, cross-examined the ictim, now 37, who spent four hours on Thursday describing the alleged abuse she suffered as a young teenager at the hands of Kelly.

Bonjean showed the court a series of text messages between Jane and Kelly from 2018 to 2019, revealing that the two appeared to have a friendly relationship, with Jane inviting the disgraced singer to a birthday party at one point.

The woman also appeared to send Kelly a message of support following the premier of the damning 'Surviving R. Kelly' documentary, which detailed the singers' decades of sexually abusing young women.

'He wasn't trying to influence you to do anything, you were just commiserating,' Bonjean said, to which Jane confirmed.

Jane said she repeatedly tried to contact him in 2019 for advice as she pondered whether to speak to authorities at length about Kelly for the first time after officials said they were in possession of more tapes of the two.

She told jurors: 'I felt comfortable enough to reach out to him because I was afraid.'

She said she decided shortly thereafter to speak to investigators.

'I no longer wanted to carry his lies,' she said. 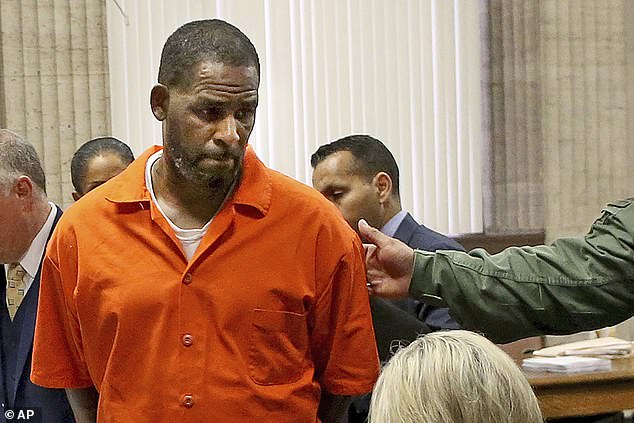 R Kelly is standing trial in his hometown of Chicago on charges of producing child pornography and enticing minors for sex. He is pictured here at a hearing in 2019 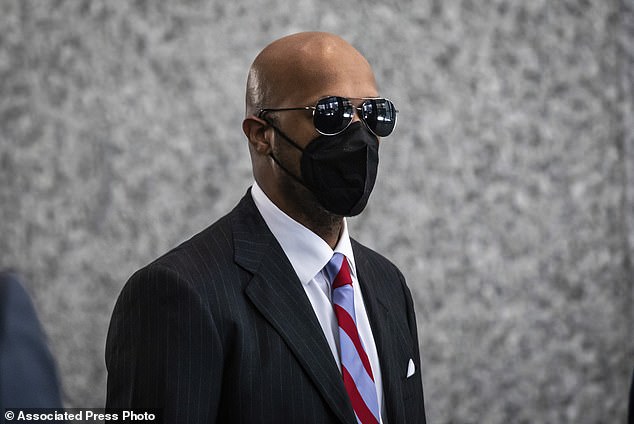 Milton 'June' Brown (pictured on Wednesday) is serving as a co-defendant in the trial, accused of helping Kelly fix a child pornography trial in 2008 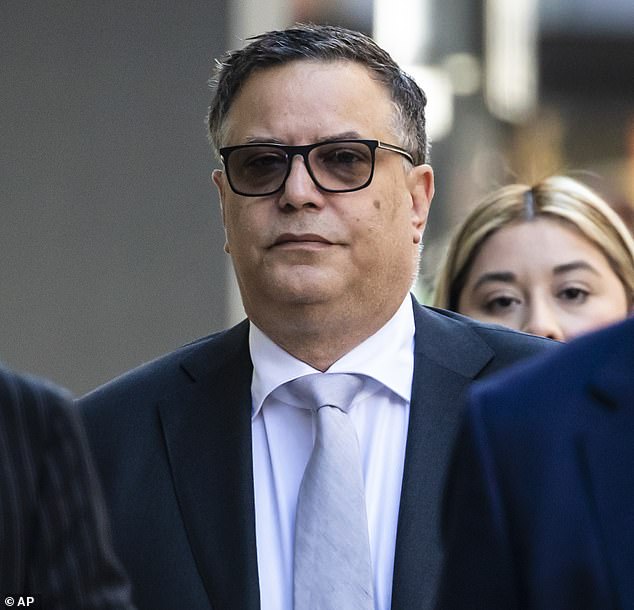 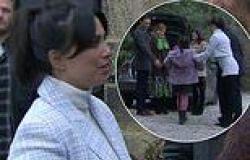 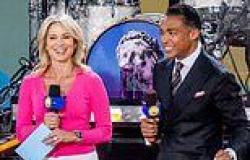 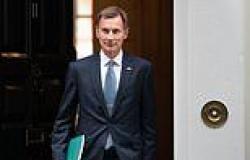