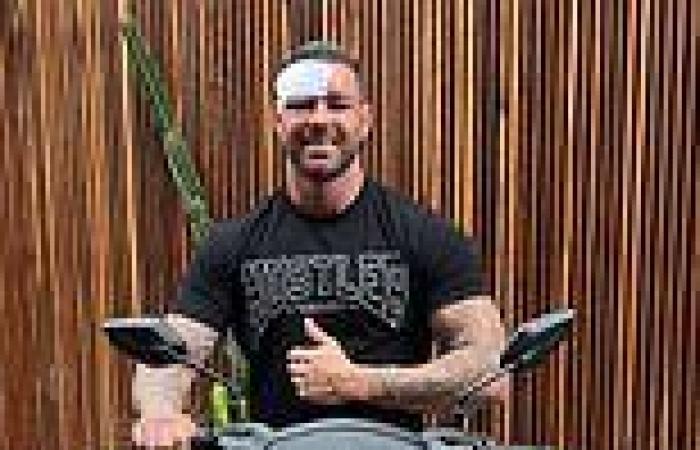 Disturbing footage emerges of an ex-con and OnlyFans model's injury after he runs his scooter into a brick wall in Bali during a holiday to celebrate the end of his parole Dale Egan, 32, from Gold Coast, booked the trip to Bali as his parole was over  Just hours after arriving, he suffered injuries after crashing a scooter into a wall  Mr Egan was previously jailed and he spent four-and-a-half years behind bars Since coming out of jail, he has become one of Australia's top OnlyFans models

A reformed jailbird who spent four years behind bars before becoming an OnlyFans star is lucky to be alive after crashing a scooter into a brick wall in Bali at 50km/h.

Dale Egan, 32, from the Gold Coast, booked the trip to Indonesia to celebrate the end of his parole period.

He was previously jailed in 2015 and spent four-and-a-half years behind bars after committing a violent, drug-fuelled home invasion.

After leaving prison, he has become one of Australia's biggest adult film stars and is in the top 0.2 per cent of influencers on the platform in the country.

The former bouncer, who makes $1m a year, checked into a villa at