In an era when back-breaking household cleaning chores numbed the minds and bodies of women across America, Frances Gabe decided she could take no more.

Confronted with a spot of fig jam that was sliding down her kitchen wall, she lost her temper and blasted it off with a garden hose. It was an extreme reaction, but one that gave her an idea.

Twelve years later, she had created the world's first self-cleaning house. Utilizing 68 self-patented devices, she built a home that washed and dried itself. Not just the walls and floors, but the clothes on their hangers in the closet, dishes in their cupboards, and the doghouse – including the dog itself. 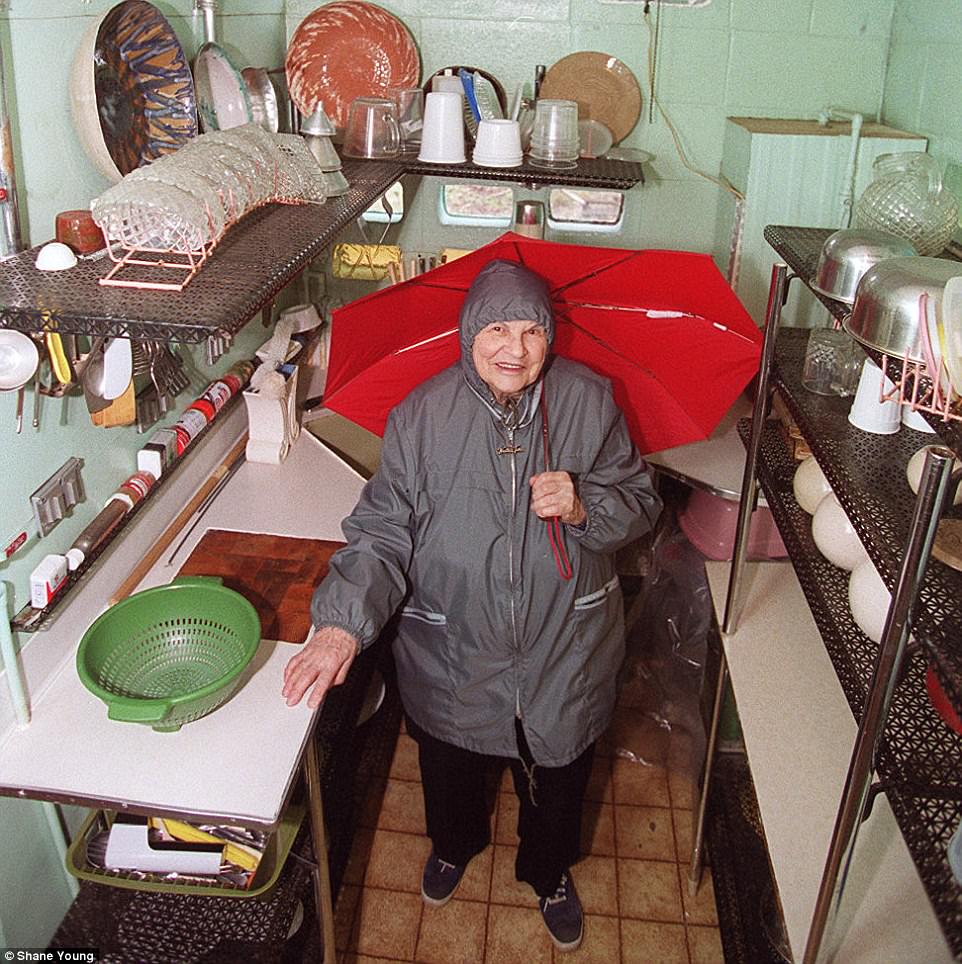 Frances Gabe, who lived to be 101, designed the first self-cleaning home which employed the use of 68 self-patented devices. The idea came to her during a particularly frustrating moment while parenting her two children when confronted with a spot of fig jam. Rather than bending over to wipe it up, she simply got the garden hose and blasted it off the wall. She is pictured here circa 2002

Her revolutionary invention earned her a spot on Ripley's Believe it Or Not, and her designs were featured in museums; her home visited by tourists.

Despite her fleeting fame, she died the day after Christmas of 2016 in relative solitude at the age of 101. She was long since divorced, her children had passed away before her, and no one in town knew her name.

Even her obituary in the local paper was just two sentences – announcing her death and her hometown of Newbury, Oregon. Her lasting legacy, however, is one of fierce independence, ingenuity, and eventual liberation.

In 1915, Frances Gabe was born Frances Grace Arnholz to her mother Ernestine and father Frederick, who was an architect and builder. The family moved around frequently, and Frances attended 18 elementary schools during the formative years of her youth, according to the New York Times.

At the age of 16, she graduated from the Girls Polytechnic High School in Portland, Oregon, though she admittedly had a difficult time conforming to societal educational norms.

'I was born a most unusual person, so I had a heck of a time in school,' she told Fight Club novelist Chuck Palahniuk for a book he wrote about unique characters in Portland.

'Everything moved much too slowly,' Ms Gabe continued. 'My last day, I stood up in class and screamed at my teacher, "You told us that last week!"' 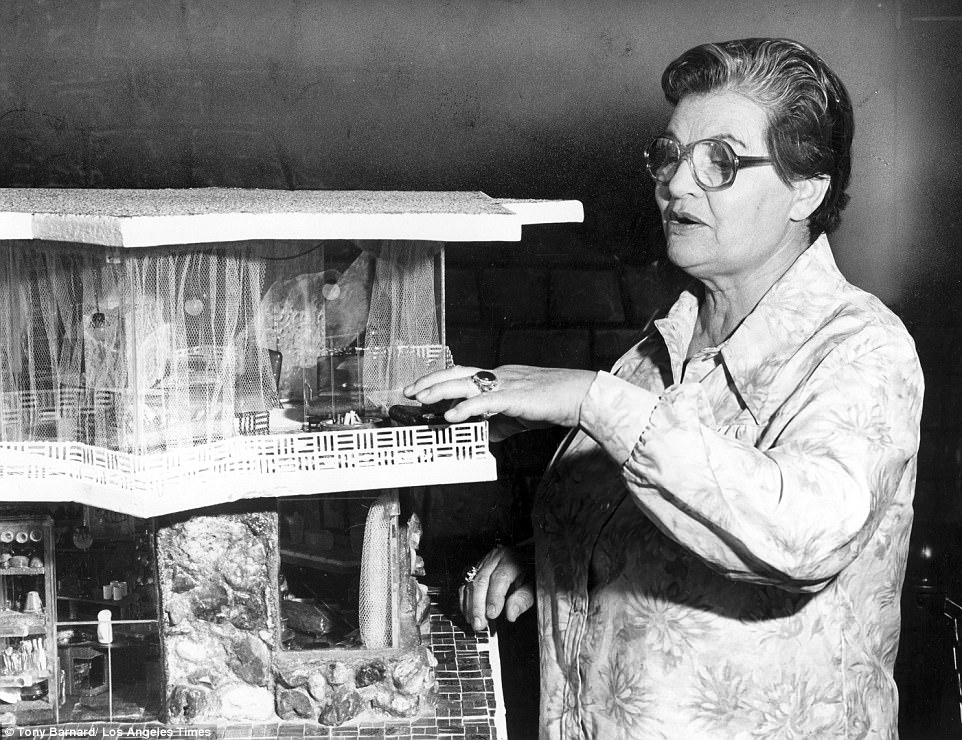 In 1930, Frances Gabe was born Frances Grace Arnholz to her mother Ernestine and father Frederick, who was an architect and builder. The family moved around frequently, and Frances attended 18 elementary schools during the formative years of her youth. She is seen with a full model of her self-cleaning house system in September 1979 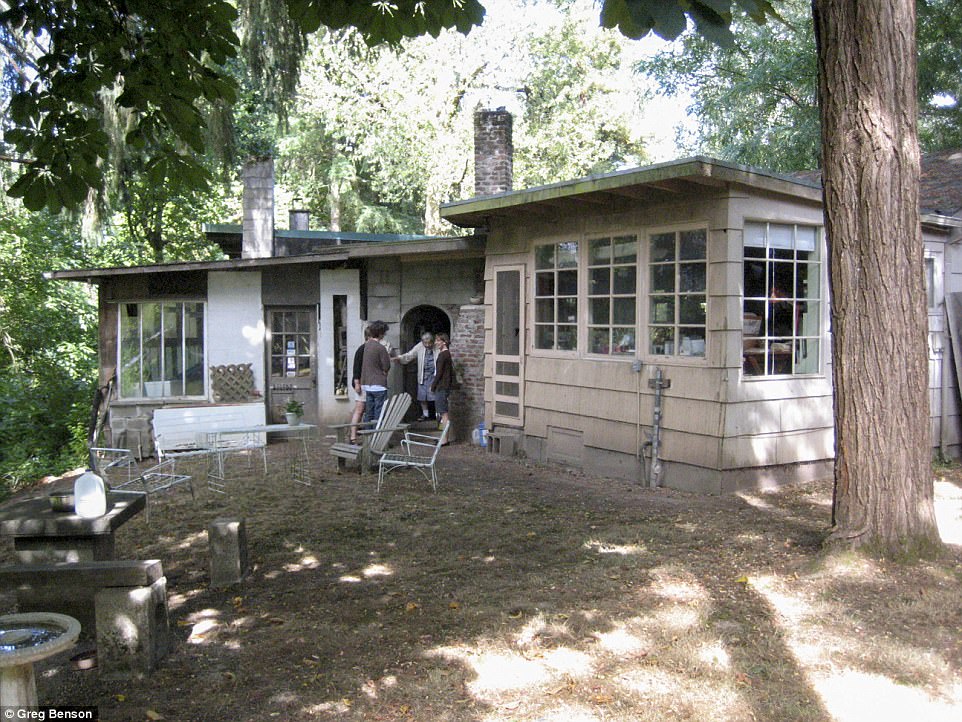 Ms Gabe charged for tours of her home for many years - showing off her intricately designed devices which coated the inside of her home with soapy water, than a rinse cycle, before blowing warm air through the house to dry it. Filmmaker Lily Benson visited Ms Gabe's home with her family in 2005

At the age of 17, Frances married her husband Herbert Grant Bateson. The couple had had two children: a boy, Grant, and a girl, Lourene. Grant died at 50 and Lourene passed at the age of 67 – both before their mother.

'I didn't like my husband anymore, so I kicked him out to the backyard,' Ms Gabe once told filmmaker Lily Benson, who visited the self-cleaning home in 2007 and later created a video simulation of the novel house. When Ms Gabe said so – she meant literally. Herbert continued to live in a trailer on their property. The two remained cordial.

This is not to say that she wasn't heartbroken by the end of a relationship that had spanned well over half her lifetime. It was in a moment of emotional agony that she sobbed, praying that God would give her a 'big job'.

'He gave me a lollapalooza,' she told the Times.

When Lily Benson visited Ms Gabe's home with her family over a decade ago, it was a moment she had dreamed of since reading about the futuristic house and its eccentric owner as a child.

When she arrived, the reality she was confronted with was far different than what she expected. Ms Gabe's home was at the end of a long dirt road, prefaced with a sign which read 'Don't feed the bull or trample on the poison oak'. The house, which she anticipated as a shimmering white beacon of cleanliness, appeared more like a cluttered 'run down hobbit house,' Lily told DailyMail.com.

Ms Gabe wheeled Benson through the halls of her prototypical home in a wheelchair that was also home-made.

'For me, that really captures the type of woman she was and why the self-cleaning house exists, because if there was a problem she would think of an immediate solution for it,' Lily said.

She recalled how at 91, Ms Gabe was receiving most of her food from Meals on Wheels, which she would often reheat in her microwave despite using a pacemaker - a dangerous combination.

In addition to creating her own home and wheelchair, the inventor also took on her made-up surname of Gabe, which was combined from her previous names – Grace, Arnholz, and Bateson – tacking on the 'e' as to not be mistaken for a talkative person. 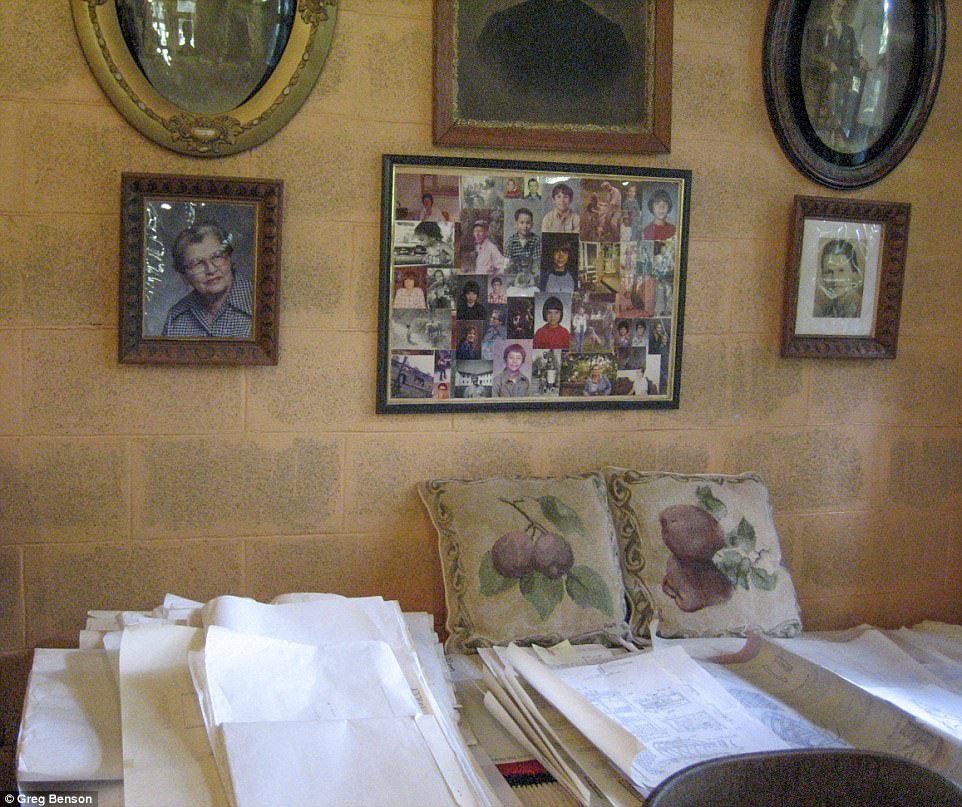 Ms Gabe was married to her husband Herbert for 35 years, before she 'got tired' of him and 'kicked him to the backyard'. The couple had two children, Grant and Lourene, both of who passed away before their mother

In tow with her seemingly forthright character, Ms Gabe was also not well-liked among her neighbors. One called her a 'dumb bat,' according to a 1982 article in People.

Even Gabe's close friend and lawyer Allyn Brown admitted that she had a reputation in town – and not one that concerned her at all.

Characterizing her as a 'difficult woman,' Mr Brown said. 'She had an adversarial relationship with all her neighbors and she didn't do anything to discourage it.'

This may have been due to her tendency to clean her home in the nude in her younger years. Or the cement mixer she kept in the backyard – or her large Great Danes.

These musings were of no concern to Ms Gabe, who preferred to be on her own. Her solitude, coupled with her eccentricity, contributed to the life-long enigma of the woman with the house that cleaned itself.

Mr Brown continued: 'When I'd come out and see her, I would be conflicted on whether she was delusional or whether she was so much smarter than I that I just didn't have the ability to recognize her genius.'

More than a decade and $15,000 after she began construction (which would have