Neil Jones, 35, and Katy Jones, 29, performed together for a captivated crowd at an event for The Caron Keating Foundation last night, showcasing their breathtaking dance moves to the soundtrack of People Help The People by Birdy. The couple, who tied the knot in 2013, could be seen getting romantic on the dance floor as the guests enjoyed the routine from their tables. The Strictly Come Dancing couple looked loved-up during the performance, which Katya shared clips of with her 132,000 Instagram followers on her story. Their appearance comes after Neil spoke out about their relationship in a revealing interview earlier this week. 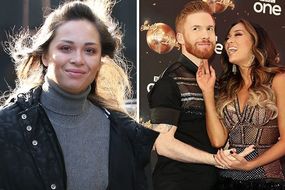 The star, who is a member of the professional line-up on Strictly but has never yet been paired with a celebrity partner, told the Daily Mail he and Katya would like to renew their vows.

Just months after she was pictured kissing Seann Walsh, 33, on a night out in London, he insisted the couple don’t pay any attention to reports about their marriage in the media.

“We’re happy and that’s all that matters,” he said.

Although Neil explained how he and Katya are considering renewing their vows, he said he thinks it’s “a little bit too soon”, them having wed just five years ago.

The dancer also opened up on their plans to start a family, saying he wants three children, having come from a large family himself.

“It’s going to happen,” he told the publication.”Maybe not yet but in a couple of years.”

Neil Jones and Katya Jones: Strictly Come Dancing couple got up close and personal during a routine (Image: