Joanne Clifton, 35, commanded attention at the Olivier Awards 2019 in a billowing gown, which featured a daring thigh-high split. The sparkling number gaped open to reveal her impeccably toned pins but appeared to be giving her trouble on the red carpet. She was seen grappling with the frock outside the Royal Albert Hall when it seemed to get stuck in between her legs. Arching over to insect the dress, the former Strictly Come Dancing professional pulled at the garment and in doing so exposed a generous amount of flesh. 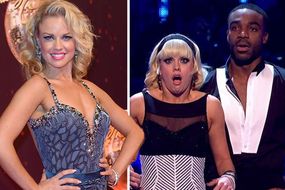 However, she appeared unfazed by the apparent fashion mishap and was photographed smiling after handling the situation.

Her outfit had a perilously low-cut neckline and clinched in at the waist to accentuate her incredible physique.

What’s more, the pleated attire fell to the floor, however, the strategic split provided a glimpse of her embellished stilettos.

On the red carpet, she was accompanied by her brother Kevin Clifton who looked equally stylish in a black suit.

The 36-year-old ballroom star, who won last year’s Strictly Come Dancing with Stacey Dooley, paired the look with a tie and smart shoes.

Karen Clifton’s former husband placed a tender arm around Joanne’s hip as they posed for photographers before entering the London venue.

Currently, Joanne is starring in the West End musical The Rocky Horror