Much of the UK on Wednesday will remain dry but cloudy for the morning going into the afternoon, with temperatures in the mid-teens. As we reach the afternoon patches of sunshine are expected to develop in the south of the country while the Midlands can and parts of Wales can still expect cloudy skies. With this sunshine will come the hottest temperatures as the Met Office forecast a high of 25 degrees with the majority of the rest of the country reaching the low 20s. 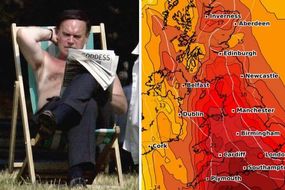 The east coast of the UK will see the coldest temperatures with 14 degrees Celsius in Newcastle.

The Met Office meteorologists Alex Deakin and Aidan McGivern also defined what a heatwave was in greater detail as part of their forecast.

Mr Deakin said: “It is 25 degrees that heatwave threshold across Scotland, Northern Island, much of Northern England, Wales and the far southwest of England and that ranges up to 28 degrees Celsius in the capital.