The Prime Minister will make a "state of politics" speech to address the rise of populism and the toxic nature of debate, particularly on social media. The speech appears to be a reflec­tion of her frustration that views in Britain and around the world have become more polarised and extreme, which many support­ers believe made it impossible for her to make a viable deal on Brexit. It is understood that the speech is still in its early stages but sources have revealed that Mrs May wants to deliver a final warning before she moves to the backbenches.

Theresa May condemned as ‘worst disaster for police’ 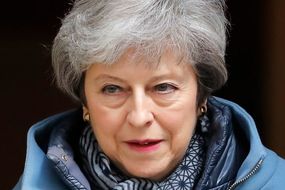 It is also under­ stood that there were discussions about including ref­erences to the impact of Donald Trump but this section may be dropped or changed to protect relations between the UK and the US.

However, a senior source said: "Ob­viously the PM has already made it clear that she is concerned about the The number the DVLA has drivers' details states has 80,595 in 2017 362,097 so far way political debate is conducted, partic­ularly on the internet.

"The number of death threats and very personal attacks on politi­cians is something that has troubled her while in office."

Another source said: "She wants to address the rise of populism and talk about the way it has changed politics."

Mrs May spent yesterday enjoy­ing herself at the Henley Regatta in Oxfordshire. But with just 15 days left as PM, she is keen to reflect on the problems which have bedevilled her government.

The failure to deliver Brexit and find a compromise which Parliament could accept eventually signalled the end for Mrs May as positions further hardened over the issue.

The popular anger at the failure to leave the EU on March 29, despite promising it would happen 108 times, fuelled popular support for the Brexit Party.