Wimbledon star Simona Halep, 27, may have her heart set on winning the final against Serena Williams, 37, today, but the Romanian tennis ace has admitted she is keen to be a mother. “In 10 years I would love to have three kids,” she told The Guardian earlier this year. “A beautiful family and be out of tennis – knowing I gave it everything.” Simona tends to keep her personal life under-wraps, but she is rumoured to be dating former tennis player Radu Barbu, 35. The pair have never announced their relationship in public, but were reportedly spotted enjoying a holiday together in Italy recently. 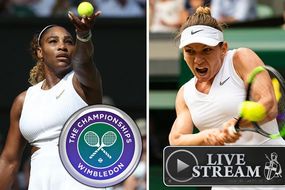 In 10 years I would love to have three kids

Is it believed the duo met through mutual friends.

Simona went on to say of her future: “Now I would love to be better in Fed Cup, to dream of the title, and the Olympics in 2020.

“I also want to win a grand slam again, to finish No 1 again. But I won’t put pressure on myself.

“I will have few more years of tennis and then I want to improve in other ways.”

Last year, Simona was taken to hospital following her loss against Caroline Wozniacki in the Australian Open final.

The tennis star received the help of medical professionals after she began shaking in her hotel following a press conference.