And now the character is set to put Roy (David Neilson) in a very difficult situation when he’s cornered by electrician Larry (Mark Sheals) at his cafe Roy’s Rolls.

The storyline begins with Roy and Evelyn at odds when the cafe owner is forced to move in with Tyrone and Evelyn on the ITV soap.

This is due to an electrical fault at the cafe, and Larry is brought in to try and fix the lingering issue. 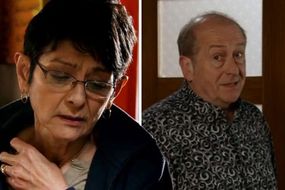 In a heartwarming twist, it isn’t long before Evelyn starts to feel affection towards Roy and the unlikely duo become friends on the ITV soap.

When Evelyn begins to sense Larry is less than professional and Roy could be being mugged off in his own business, she starts a smear campaign to get him struck off and ensure other potential customers know the truth.

Roy is horrified by Evelyn’s plans, but there’s little he can do to stop her from ploughing forward with her plan.

And when Larry discovers what’s going on and that his livelihood could be in danger, he barrels into the cafe and corners the beloved Roy.

Mary Taylor (Patti Clare) is helping Roy clean the cafe on an innocent afternoon when they are suddenly interrupted.