Ellie Harrison, 41, stepped out in an orange utility trend inspired playsuit for Countryfile Live today. The BBC show’s presenting team headed to Blenheim Palace, Oxfordshire for the event and took several photo opportunities in the picturesque location. Ellie, who joined Countryfile in 2009, showed off her slender figure in her summery outfit, which featured silver buttons and fashion-forward pockets. The co-host beamed for the camera as she wore her signature flowing blonde tresses in loose waves around her shoulders. 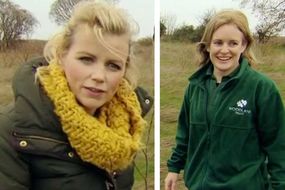 She accessorised with a green festival-style wrist band designed for the event and completed her look with a pair of brown leather boots decorated in a unique pattern.

Ellie showcased her toned legs in the short playsuit and perched on a giant gate next to Charlotte Smith and Anita Rani, 41.

The presenters also interacted with an adorable group of sheep in another snap, as they relaxed on bales of hay.

Ellie then shared a fun moment with her co-stars as they took pictures of John Craven, 78, in front of the pub which was named after him.

Meanwhile, Ellie Harrison opened up about her “painful” health diagnosis.

The BBC favourite revealed she suffers from Raynaud’s disease, which can worsen due to cold weather conditions.