BREXITEER and economic advisory expert Paul Gambles warned that the EU could sacrifice the wellbeing of its member-states to ensure Germany and France can force the UK to "suffer" over Brexit.

MBMG Investment co-founder and Managing Partner Paul Gambles said that the EU wishes to prevent the UK from creating a template on how to leave the European Union. He added that the majority of Brexit outcomes won’t impact France and Germany too heavily, and therefore Emmanuel Macron and Angela Merkel may push to see the UK “suffer". In an interview with Express.co.uk, he insisted that this was part of the reason why the EU has refused to speak with new Prime Minister Boris Johnson to discuss the reopening of the withdrawal agreement. 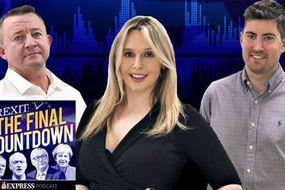 Real 'mood' in Brussels as bloc prepares for 'no deal' Brexit

Mr Gambles said: “You have to remember the other side of that coin, is the EU.

“The EU is unlikely to make significant concessions.

“A lot of people don’t really understand the reason for that.

“The main reason why the EU is unlikely to make concession is that the two biggest powerbrokers in the Eurozone are obviously Germany and France.

JUST IN: EU 'mood' outlined as bloc prepares for no deal – 'It's UK's fault!'

Paul Gambles argued that France and Germany could push to see the UK suffer over Brexit (Image: Getty)

“If you combine Germany and France they are the sort of outliers within the EU in terms of the balance of trade with the UK.

“France is virtually neutral, it has a very small deficit so it marginally imports more from the UK than it exports.

“Germany massively exports whereas the rest of Europe would actually suffer far more."

He added “But, the rest of Europe doesn’t get taken into account