BORIS JOHNSON has been warned Irish-American diplomats and politicians could throw a spanner in his works and stop him from securing a post-Brexit trade deal with President Donald Trump.

Boris Johnson was issued a dire warning against delivering a no deal Brexit which could put at risk the survivability of the Good Friday Agreement. The 54-strong Friends of Ireland caucus in Congress claimed they will not allow a potential deal with the UK through Congress unless they had the certainty Brexit would not harm peace relations on the isle of Ireland. Professor John Ryan, from the advisory organisation Brexit Partners, told RT UK: "The Irish-American lobby is one of the most influential lobbies in the United States. 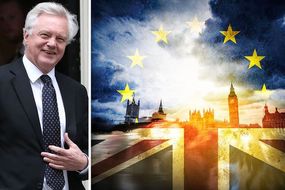 "Also voters, 33 to 34 millions Americans identify themselves as Irish-American, they are very strong in Congress. Even Pelosi, who is the Speaker of the House in the House of Representatives, she is an Italian-American but her son-in-law is Irish-American.

"They are in very influential positions but they are not only in the Democratic Party, but they are also in the Republican Party as well."

Boris Johnson insisted last month he would strive to secure a trade deal with the United States to come into effect shortly after Brexit but the latest warning from the US Congress would complicate his plans.

JUST IN: Varadkar blasted and told to 'step up' on Brexit backstop responsibility in enraged rant

Brexit news: Irish-American diplomats and politicians said they could not back a deal with the UK (Image: CSPAN•SKY NEWS)

"The President would not be able to push a deal through. He has already been unable to push his Mexico and Canada deals through."

Massachusetts Congressman Richard Neal, the head of the Friends of Ireland caucus, insisted the group would have "little enthusiasm" to approve of a deal if the Good Friday Agreement were to come under threat.

Mr Neal said: "We oversee all trade agreements as part of our tax jurisdiction.

"I would have little enthusiasm for entertaining a bilateral trade agreement with the UK, if they were to jeopardise the agreement."