In his first interview since the birth of Meghan and Harry’s first child in May, Mr Markle has detailed the grief he has experienced at being excluded from his daughter’s and grandchild’s life. The 75-year-old, who lives alone in Rosarito, Mexico, has called on Meghan to sent a photograph of the little tot so he can frame it and put it next to his favourite childhood picture of Meghan. In a heartfelt interview, Meghan’s father said he wanted to see if Archie had the “famous Markle nose”.

Meghan Markle rift: Diana would have been 'fascinated' by Thomas 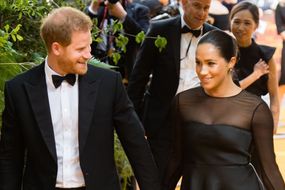 Mr Markle told the Mail on Sunday: “I would like them to send me a picture of Archie so I can frame it and put it on my wall beside the one of Meghan.

“Isn’t that what any grandfather would want? I’d love to know if he’s got the famous Markle nose.”

Mr Markle also gave a rare-insight into the Duchess of Sussex’s childhood in the US and insisted he and ‘Meggie’ had been “so close”.

Thomas Markle has pleaded with Meghan to see his grandson (Image: ITV)

He said: “I took that photograph and I always loved it because of the pensive look on her face. That was my Meggie.

“We were so close. I would come home from work and I would hold her against my chest and we would walk around for hours and hours.

“Sometimes I get the feeling people think I don’t love my daughter. I do love her very much.

“I would love nothing more than to put a picture of Archie in a frame and place it beside the one of Meghan.”

Thomas Markle has given his first interview since the birth of his grandson (Image: ITV)

Meghan gave birth to Archie on May, 6, and Mr Markle hoped motherhood would “mellow” her to finally end their feud.

However a further three months of no known